The National Cancer Institute predicts 10,000 more breast and colon cancer deaths over the next decade, but doctors say there will be additional losses 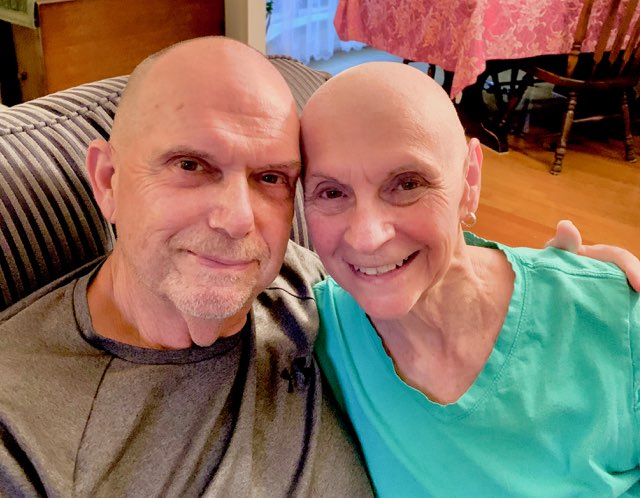 In March, just as the coronavirus pandemic began to take hold in Houston, Linda Murray sat alone on a bench outside her doctor’s clinic, looking at a printout of her breast biopsy test results: Positive.

It was a “double whammy,” she said. The pandemic was forcing people to accept a grave new reality, but breast cancer was an additional reality she wasn’t prepared to face.

Normally, a patient would meet with their doctor in person to sit down, go through test results and develop a treatment plan, but these were far from normal times. Houston was on lockdown. Businesses were closing and hospitals had canceled elective surgeries, procedures and appointments.

But cancer doesn’t stop—not even for a pandemic.

“I just got the diagnosis and hit the ground running,” Murray recalled. “I never had that piece in my cancer journey. I lost that. It was hard and it caused a lot of stress because I had to figure it out on my own.”

Eventually, Murray had a treatment plan. She started her year-long course of chemotherapy, surgery, and radiation shortly after her diagnosis.

“The flesh was willing, but the spirit was reluctant,” she said. “I did not want the role of being a cancer patient. I definitely did not want that, but that’s what I was given.”

At the start of the pandemic, Murray made multiple trips to Houston Methodist Hospital, where she is undergoing treatment. She continues to go on a weekly basis, but her family is concerned about the risk of COVID-19 every time she steps through the entrance to see her doctor.

As it turns out, this is a common fear—one that experts believe will drive up death rates in the coming years.

In June, Norman Sharpless, M.D., director of the National Cancer Institute (NCI), warned that the COVID-19 pandemic would lead to an increase of 10,000 more breast and colorectal cancer deaths in the U.S. over the next decade.

Many hospitals temporarily postponed and rescheduled cancer appointments and procedures—such as mammograms and colonoscopies—to minimize foot traffic and focus clinical operations on COVID-19 patients. While this was the right call at the time, it bolstered the public fear of contracting COVID-19 in the hospital and delayed the early detection and treatment of cancer.

“Cancers being missed now will still come to light eventually, but at a later stage … and with worse prognoses,” Sharpless wrote.

An NCI model projected the effect of COVID-19 on the outcomes of the two cancers and predicted that delayed diagnoses and treatments would lead to a 1 percent increase in mortality rates by 2030, peaking over the next two years.

“Clearly, postponing procedures and deferring care as a result of the pandemic was prudent at one time, but the spread, duration, and future peaks of COVID-19 remain unclear,” Sharpless wrote. “However, ignoring life-threatening non-COVID-19 conditions such as cancer for too long may turn one public health crisis into many others. Let’s avoid that outcome.”

Hospitals implemented safety measures—such as high air exchanges throughout the building, over-the-phone pre-screening, temperature checks at entrances, face coverings and social distancing—to protect employees and patients, especially those who are immunocompromised. And during lockdowns, cancer patients are not allowed to bring visitors—including family members—with them.

“When you’re trying to tell somebody that they have cancer and their significant other is not around, there’s no one to hold them or hug them,” said Therese Bevers, M.D., medical director of the Cancer Prevention Center and prevention outreach programs at The University of Texas MD Anderson Cancer Center. “It was so difficult for so many patients.”

This stoked more fear and anxiety that prevented people from going to the hospital to seek care.

Even before the NCI’s projected numbers were published, Bevers recognized the dangerous implications of delaying a diagnosis.

“It’s something those of us in the business had been talking about before [the analysis] came out,” she said. “Patients called in March and said they wanted to schedule an appointment but didn’t want to come in until June or July. I thought, ‘God, this is scary because they know they have a problem,’ whether they felt a mass or they were notified that their mammogram that they had done before the lockdown was abnormal.”

Charles Geyer, M.D., deputy director of Houston Methodist Cancer Center, said his colleagues in New York reported that the number of patients presenting with cancer fell by 80 percent at their institutions after the lockdown was lifted. He saw the same trend happening in Houston, as well.

“We know that cancers didn’t stop developing during COVID,” Geyer said. “It’s just that people weren’t coming in with their cancers.”

Because cancer is most treatable when it’s caught early, a later diagnosis places a greater burden on a patient’s health.

“We have made clear strides in our outcomes with many more survivors,” Geyer added. “Some of that is because of more effective therapy, but there’s no question that a major part of it is early detection and screening.”

The NCI’s estimated number of breast and colorectal cancer deaths is just one aspect of a larger issue.

“Part of this is going to be the bottleneck of people getting diagnosed late, but not just for cancer,” Bevers said. “People aren’t going to the doctor for symptoms that they otherwise would. We talk about the number of deaths from COVID, but the community at large doesn’t understand that the numbers are going to be much larger from other problems that didn’t get addressed. … There is going to be a greater toll from COVID than what we see from the virus.”

A study of electronic health data by the U.S. Centers for Disease Control and Prevention’s National Syndromic Surveillance Program found a 42 percent drop in visits to the emergency department. While the study showed a decline of visits for superficial injuries, strains and other conditions that could be addressed through primary or urgent care, admission rates for chest pain and heart attacks decreased—raising concern among physicians that people were delaying or avoiding seeking care for life-threatening conditions.

Hospitalizations for heart attacks decreased by up to 48 percent between January and April 2020, according to a study published in the New England Journal of Medicine in May. The study examined weekly admission rates of acute myocardial infarction cases and compared them to data from 2019.

“No one is completely safe from COVID until there’s an effective vaccine,” Geyer said. “There’s some risk of acquiring COVID, but it is not there when you come to the hospital.”

Despite her family’s concern about the risk of COVID-19 in hospitals, Linda Murray felt safe and confident seeing her doctor.

“Some people may feel rattled by seeing the screening process, but if you can look at it as they’re there to protect you, I think that’s key,” she said. “As you enter, I look at those who are on the front lines as a protective guard of people. It’s like walking through somewhere where you’re surrounded by a bunch of angelic hosts who are looking out for you.”

The message doctors are sending is clear.

“Don’t sit at home with a problem,” Geyer stressed. “If you’ve got something going on, go to the doctor. Get it checked out, so that if there is something serious—like cancer and heart disease—we can treat you safely.”