For patients who survive severe cases of COVID-19, recovery is all about rehabilitation 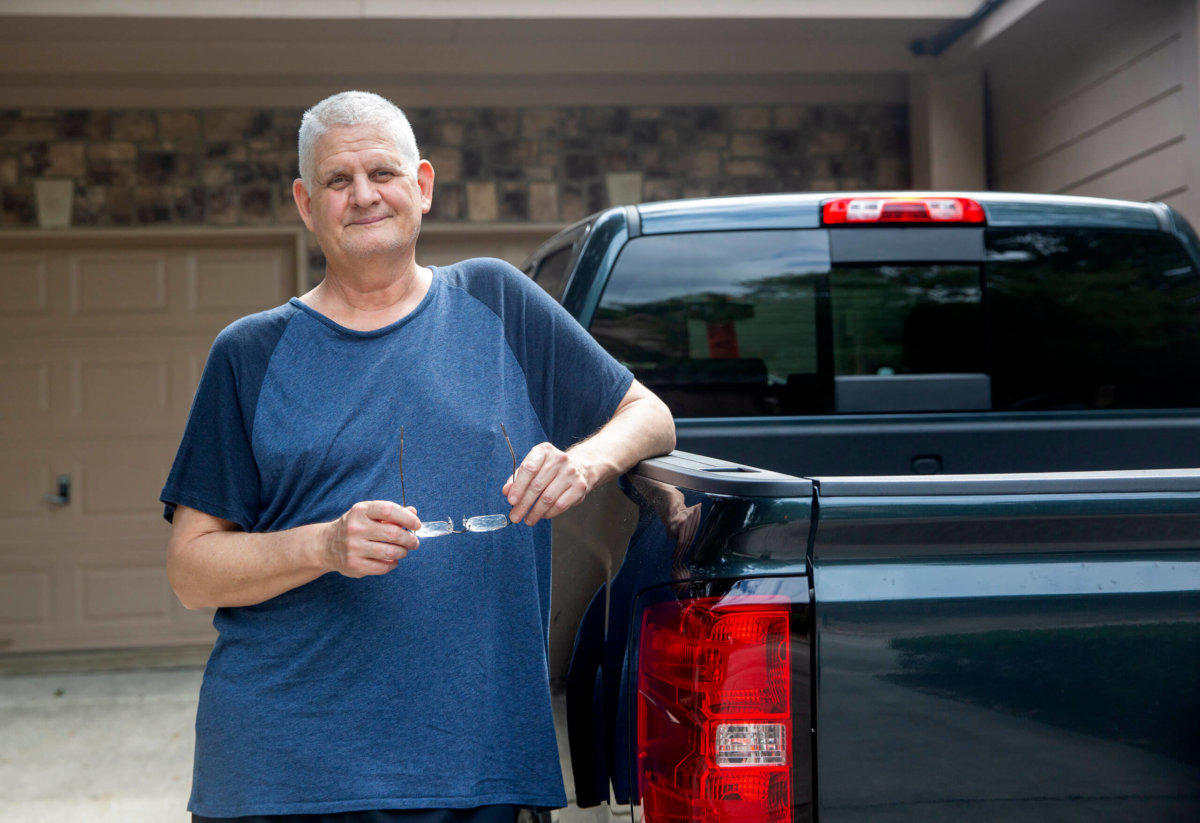 When Phil Eaton first came out of sedation after a lengthy battle with COVID-19, doctors asked him a question that should have been easy.

Who is the president?

The second question also gave him pause: Is it 2020, or some other year?

“It took me some time,” Eaton recalled. “Finally I said ‘2020,’ and they looked at me kind of quizzically. For a second, I wanted to change my answer—but I didn’t.”

Eaton, 63, is one of the lucky ones. He survived COVID-19. Yet regaining consciousness was hardly the end of Eaton’s journey. Rather, it was the beginning of rehabilitation for both his body and his mind.

“When I first got to TIRR Memorial Hermann The Woodlands, I couldn’t stand up for more than three to five seconds at a time. My default was: I’m alive. I’m not going to be upset or depressed about anything,” said Eaton, who lost more than 50 pounds from his 6-foot 4-inch frame during the illness. “But at the same time I’m thinking: Is this going to be my life?”

Patients who recover from severe cases of COVID-19 do not simply rest a few days and resume their regular lives.

“This virus affects each and every organ system in the body,” said Gerard Francisco, M.D., chief medical officer for TIRR Memorial Hermann, a top-ranked Houston rehabilitation hospital with several satellite facilities around the metropolitan area. “Some people have reported problems with memory, with thinking. Some of them describe themselves as being slower to function. … Right now we’re not sure if it’s the virus alone that’s causing this, or was it because of other medications or medical conditions that occurred while these patients were recovering?” 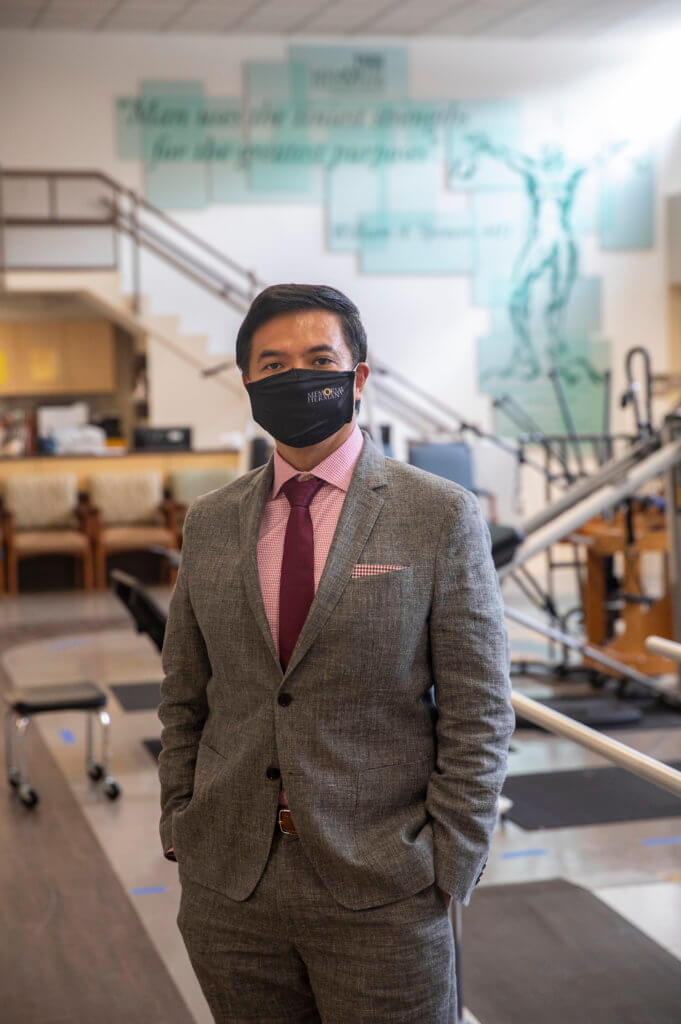 Gerard Francisco, M.D., is chief medical officer for TIRR Memorial Hermann and chairman and professor in the department of physical medicine and rehabilitation at McGovern Medical School at The University of Texas Health Science Center at Houston (UTHealth).

TIRR leaders knew soon after the start of the pandemic that critically ill COVID-19 survivors would need rehabilitation, thanks to early reports from China that described severe debilities in patients including stroke-like symptoms. Francisco and some of his colleagues have written a paper about what rehabilitation specialists should expect, forthcoming in The Journal of the International Society for Physical and Rehabilitation Medicine.

“On the physical side, I anticipate we will have a lot of reconditioning, strengthening and building up to do,” said Francisco, chairman and professor in the department of physical medicine and rehabilitation at McGovern Medical School at The University of Texas Health Science Center at Houston (UTHealth). “We will be assessing speech and swallowing, because I anticipate that many COVID-19 patients had breathing tubes that affected their vocal cords and their ability to swallow safely.”

On the mental side, TIRR teams will assess cognition.

“It is a well-known fact that those who have a severe form of respiratory failure are more likely to have some cognitive problems, as well, because of a relative lack of oxygen going to the brain,” Francisco said.

Eaton first started feeling poorly around March 9. He had a slight fever, so he took a few days off from work. On March 12, the Montgomery Independent School District closed schools due to concerns about the spread of the coronavirus—one of the first districts in the area to do so.

On March 16, Eaton ended up at the emergency room at Memorial Hermann The Woodlands. Initially, he believed he had a sinus infection, but, ultimately, he was diagnosed with COVID-19, the illness caused by the virus SARS-CoV-2. Two days later, doctors put him on a ventilator, where he remained for “20-and-a-half” days.

His physical condition was grim. “Doctors cleaned out my lungs and then the lungs filled up again,” Eaton said. “I guess they’re hitting you with every kind of medication they can think of. Then my kidneys started to struggle. I was on dialysis a couple of times.”

During that period, family, friends, co-workers, students and parents braced for the worst. Eaton’s daughter, Erika, who lives in Baton Rouge, Louisiana, with her husband and their 14-month-old baby, received daily updates on her dad from doctors and shared them on social media. Because of COVID-19, she was not allowed to visit.

Although the ventilator was removed on April 4, Eaton was still somewhat sedated for another nine days. He remembers nothing from the time he was intubated and only bits and pieces from the days when he was regaining consciousness.

“At some point, I guess, I realized I was in the hospital,” Eaton said. “And when I woke up, it’s not like they give you a playbook as to what took place. I’m still learning about things that happened during that time.”

On April 13, Eaton was admitted to TIRR in The Woodlands, where he remained for 16 days.

“I was so weak,” he recalled. “My arms and legs were so much skinnier. … I knew that, physically, I had work to do, but I had zero understanding that they were also concerned about my cognition. When they started talking about speech therapy and neuropsych kinds of stuff, I was a bit defensive. … I was completely confused as to why I was looking at puzzles and doing paperwork.”

Early on, Eaton was asked to draw a clock and insert the correct time. Therapists timed him moving blocks from one side of a backgammon-like box to another. He took tests that asked him to read different passages and identify words that started with certain letters. Meanwhile, occupational therapists focused on getting him ready to go home.

“They want to know: Can you brush your teeth? Can you take a shower? Can you put your socks on?” Eaton said.

TIRR does not yet have a lot of COVID-19 patients in rehabilitation, but the number of individuals in Texas diagnosed with the illness continues to climb. As of June 4, close to 70,000 cases have been reported across the state, along with 1,767 fatalities, according to the Texas Department of State Health Services.

“It seems like the need is going to be pretty extensive, not only in the short-term but even in the long-term,” Francisco said.

For instance, an early report TIRR received from medical experts in New York indicated that some patients with relatively mild COVID-19 symptoms—individuals who were seen in the emergency room and then sent home—ended up having strokes.

“Who could have predicted that?” Francisco said. “So now we’re understanding through inference that one of the unusual things about COVID is that the virus affects the blood-clotting mechanism of the body. The blood becomes thicker. …That’s why some people end up with kidney failure, others have the COVID purple toes, others have heart involvement. That’s why even some teenagers have heart failure, because of the involvement of the blood vessels of the heart.”

Francisco and his colleagues estimate that close to 15 percent of individuals who fought COVID-19 will need help restoring physical and cognitive function. That number is based on the percentage of patients who end up in the ICU while being treated for sepsis—a potentially deadly condition in which the body has an outsize response to infection, leading to tissue damage and organ failure.

For recovering COVID-19 patients, the length of time in inpatient or outpatient rehabilitation will vary from person to person.

“Our goal is to bring these people back to the community—bring them back to the workforce,” Francisco said. 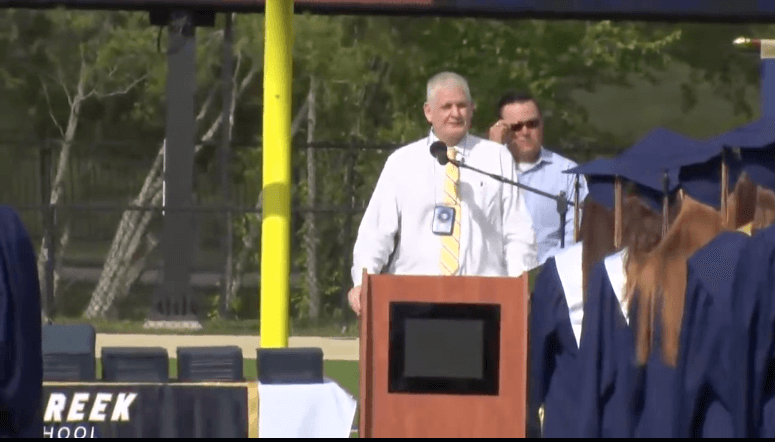 Phil Eaton was discharged from TIRR on May 5, a full 51 days after being admitted to Memorial Hermann The Woodlands. During his exit test, he had a chance to look at the clock he drew in his early days of rehabilitation.

“It looked like a lima bean,” Eaton said. Cognitively and physically, he has come a long way.

Today, Eaton is an outpatient at TIRR, working towards resuming all facets of his ordinary life.

“I still can’t drive,” he said, explaining that part of his occupational therapy includes tests related to his judgment and reasoning behind the wheel. “I’m going to say that March 14 is the last time I drove. In fact, the tank of gas that’s in my truck right now—I think we fueled up on March 14. A couple of times I’ve just gone out there and sat in my truck and started it.”

Another ongoing challenge for Eaton is his left foot, which started aching a couple of days into rehabilitation. He is now seeing a podiatrist who is trying to determine the cause of the pain. For the time being, that foot is in a boot.

“If my left foot was OK, I might be able to run,” Eaton said.

His main goal is to get back to work. A lot of people who don’t work in education assume that everyone takes the summer off and heads back to school in August, Eaton said, which is not the case. He takes off maybe 10 days a year.

But doctors did clear him for one special event on Thursday, June 4—the first-ever graduation ceremony at Lake Creek High School, which opened in August 2018. As principal, Eaton hosted the ceremony, speaking directly to the graduating seniors spread out across the football field in chairs set 6 feet apart. Only recently did the state lift social distancing guidelines that would allow for a live commencement ceremony.

“Four weeks ago, having a graduation like this was not possible,” Eaton said. “Our world responded to the global pandemic with our nation in quarantine and in great uncertainty. Even me, I found myself in a battle with COVID-19.”

At this point, Eaton was interrupted by clapping and cheering from the crowd. But that was the one and only time he spoke of his personal struggle.

“Today you are here, graduating in a ceremony,” he continued, “and I’m here as your principal, honoring you, the Lake Creek High School class of 2020. Together, we have boldly roared down brick walls in our past. And now we move proudly into the future.”