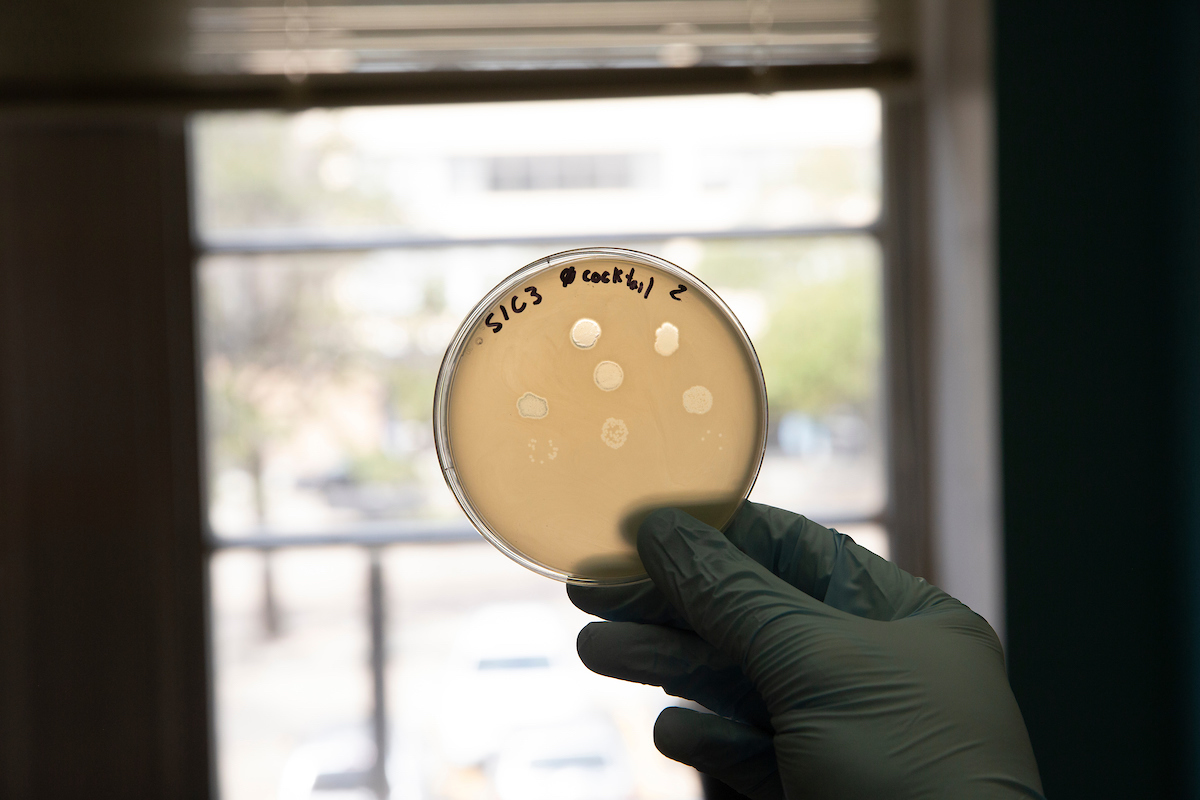 Austen Terwilliger adjusted his hard hat and safety glasses. He had already fastened a long green rope to his plastic bucket, and he slowly began guiding it down into the sewage tank at a wastewater treatment plant in Houston. Terwilliger, who has a Ph.D. in molecular microbiology, was hunting for phages.

Phages, the most abundant microorganism on the planet, can be found anywhere bacteria is present. Increasingly, phages are believed to be the most promising solution to the growing problem of antibiotic resistance, one of the biggest threats to global health today, according to the World Health Organization.

Short for bacteriophage, a phage is a virus that binds to bacteria. A phage injects its viral DNA into a bacterial cell and then replicates quickly until the cell ruptures, effectively destroying the cell and halting any bacterial infection. Unlike antibiotics—which are composed of a fixed chemical structure that remains consistent—phages have DNA that evolves alongside their bacterial counterparts. Bacteria is constantly evolving, so much so that some strains have adapted enough to resist modern medicine’s most potent antibiotics. But because phages can evolve in tandem with their bacterial hosts, even a “super-bug” bacterial strain resistant to antibiotics could be quelled with the counterpart phage—hence Terwilliger’s field trip to the sewer. 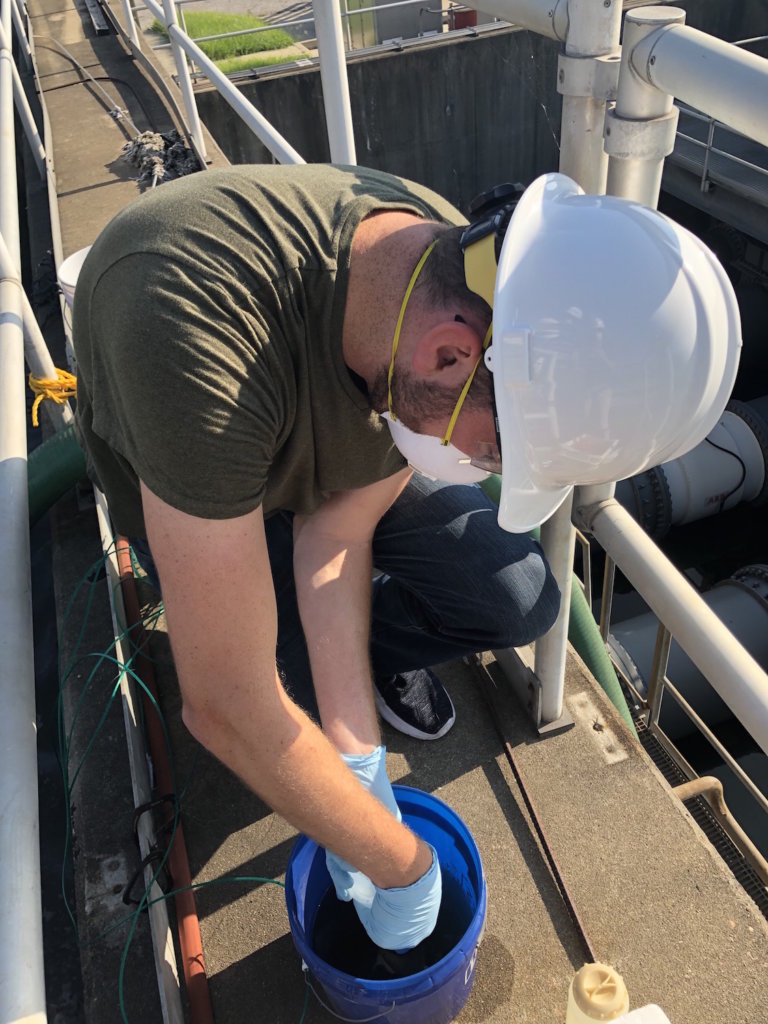 “These are the natural predators of bacteria. They’ve been infecting and killing them, co-evolving with them, for billions of years,” Terwilliger said. “They’re also the most numerous replicating entity on the planet. It’s estimated that there’s 10 to the 31 phages present—that’s 10 with 31 zeros.”

Sabrina Green, a graduate student who works alongside Terwilliger, went to Houston’s Hermann Park to hunt down a specific phage for an antibiotic-resistant strain of E. coli.

“We picked up bird poop because we know that these E. coli that I study also cause infections in certain types of birds, so we went directly to the source and found those phages,” Green said. “We had laboratory strains of phage and they couldn’t infect these E. coli, but the phage that we found from the park could infect them and kill them.”

Why? The phage from the park had evolved specifically for that strain of E. coli bacteria.

When harnessed for medicine, phage therapy is also a more direct form of treatment than antibiotics.

“Antibiotics are like a bomb, they can take out all types of bacterial strains, whereas phages can target certain strains,” Green said. “You hear a lot about how antibiotics can deplete the microbiome, leading to secondary infections and all these secondary issues, and we’re learning more and more about these disturbances in the gut that can happen. Phages are like a missile, they’re going to target that bacterial strain and leave everything else intact.”

Phages can also go through thick biological substances that many antibiotics can’t penetrate, Green added, including biofilm or the mucus layer inside the gut.

Terwilliger and Green both play key roles at the TAILΦR Service Center at Baylor College of Medicine, an initiative aimed at providing personalized phage-based treatment for antibiotic-resistant bacterial infections. Terwilliger is the director of operations and Green is the microbiome lead and co-founder. TAILΦR, which stands for Tailored Antibacterials and Innovative Laboratories for phage (Φ) Research, is also working on a more global approach toward infection and biocontrol outside of health care—in agriculture, industry and other settings.

Taking evolved phages from the wild and delivering them to an aggressive strain of bacteria inside a patient is a remarkably straightforward process, albeit labor-intensive.

“Phages, as viruses, are much smaller than their host, so the first step is basically getting rid of the largest particles—things that are larger than bacteria, like stone, dirt, anything of that nature. With what is left, you can use a filter of a certain size so that those pores allow the phage to pass through but the bacteria are trapped on that filter,” Terwilliger said. “What passes through that filter contains the viruses—the phages—and anything that would be smaller, like chemicals, proteins.”

The next step is to take that filtrate and add it to a “lawn” comprised of the specific bacteria the phage is intended to attack, Terwilliger said. Then, you simply let it grow overnight. If there are lytic phages present—meaning those that will replicate quickly, burst and kill the cells—the next morning you will find clumps of clearings on the lawn, “complete obliteration” where the phages effectively killed the spread of bacteria.

That phage strain is then tested for contaminants and its genome is sequenced to ensure it doesn’t contain undesirable elements. Under an expanded access provision, the U.S. Food and Drug Administration (FDA) reviews each phage strain intended for treatment to maintain safety and purity. After that, the TAILΦR lab works with a compounding pharmacy to deliver a product appropriate for the type of infection, which could include treatment directly to a surface wound, such as a diabetic foot ulcer, or an IV drip infusion for, say, a lung or urinary tract infection.

Vials of frozen phages are stored at the TAILΦR labs at Baylor College of Medicine.Already, the TAILΦR lab has catalogued a library of phages for certain strains of bacteria that can be administered to patients through the FDA’s expanded access for an investigational new drug, which allows for treatment outside of clinical trials when a patient has an immediately life-threatening condition—as is the case with many antibiotic-resistant bacterial infections. Terwilliger hopes that the library will grow to the point that the lab will hold FDA-approved stock for numerous strains of bacteria, which would mean quick and effective treatment for ailing patients. But because it is in bacteria’s nature to evolve rapidly to survive, there will likely always be a need for the FDA’s approval through expanded access for new strains that require trips to the park or sewer, he said.

“A doctor, hospital or institution will contact us and say, ‘We think this patient is a good candidate for phage therapy for these reasons. Can we send you a clinical sample or an isolate of that bacterium that we took from the patient to look for phage?’” Terwilliger said. “Either we already have them saved in our library, or we go looking for them.”

The TAILΦR lab is not the first group to use phages for antibacterial purposes. The idea of phage therapy originated in Tbilisi, Georgia, in the 1920s, but for decades the concept was associated with communism and largely abandoned in the U.S. As the threat of antibiotic resistance has grown, however, researchers around the globe have reexamined the straightforward science behind it.

A Dutch company has created a product called PhageGuard, which uses an organic phage solution to combat deadly bacteria on food products, including listeria, salmonella and E. coli. And in 2018, the University of California, San Diego opened the first phage therapy center in the U.S. to help patients who were dying from antibiotic-resistant bacteria. Like TAILΦR, that center can cultivate phages for individualized treatments.

By providing a personalized approach for treating specific, antibiotic-resistant strains of bacteria, phage therapy is joining the growing field of precision medicine.

“For the longest time, our society has been pigeonholed into thinking that there are silver bullets for so many diseases, and that it’s one drug, and that sort of covers this cloud of a disease—cancer, diabetes, cardiovascular disease,” said Anthony Maresso, Ph.D., an associate professor of virology and microbiology at Baylor College of Medicine and the faculty founder at TAILΦR. “What we’re learning in the last 20 years, and this really has blossomed with the sequencing of the human genome, is that these diseases are really composites of hundreds of other diseases, and they change in real time.”

Cancer, Maresso said, is the perfect example of that kind of evolution.

“When cancer cells grow, they undergo mutations, and they learn to adapt to the chemotherapy that someone may be getting, and then that line will emerge—it’s like evolution in real time. And if there isn’t a medicine to take care of that line, then there really is no hope for treatment of that disease. At that stage, it’s fundamentally different than what you started with.”

Nothing on Earth evolves faster than bacteria, Maresso said—except phages.

“If the modern pharma pipeline thinks that it’s going to create chemical antibiotics that are going to adapt in real time in that way, we’re going to be beating our heads against the wall for another 80 years,” Maresso said. “It takes someone who studies bacteria and knows how fast they change in real time to know that’s not the way to go.” 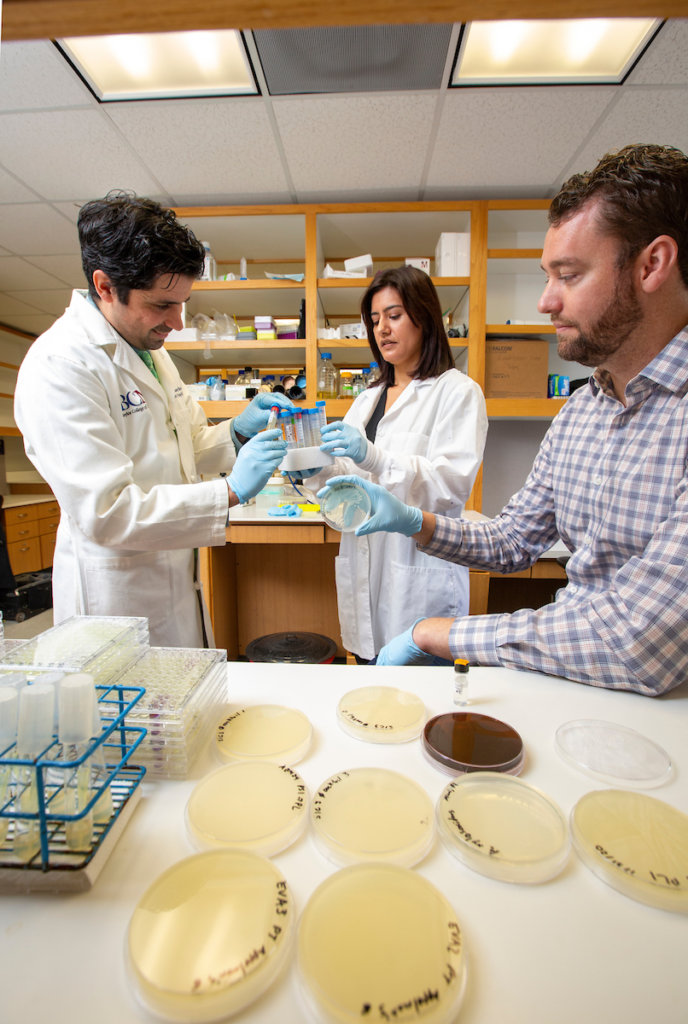 Anthony Maresso, Ph.D., an associate professor of virology and microbiology at Baylor College of Medicine and the faculty founder at TAILΦR labs, works with graduate student Sabrina Green, microbiome lead and co-founder of TAILΦR; and director of operations Austen Terwilliger, Ph.D.

Maresso admits that a movement to treat antibiotic resistance with bacteriophages is likely to ruffle some feathers, because this is not how modern drugs are made.

“But it might be the reality that we have to face—that the regulatory process, and pharma, too, might have to also adapt,” he said. “I don’t think the problem is science—science can do this. The problem is us, and our framework, and society and changing minds. The hope is that TAILΦR is a way to provide a scientifically-driven method of maybe changing some minds in that direction.”

Antibiotics are still a critical tool for combating infections caused by bacteria, Maresso stressed, but a more direct approach is required for those strains that have evolved to be resistant.

“There is really no more specific way to target someone’s infection than adapting the medicine for only their strain,” he said. “That’s the ultimate form of personalized medicine.”