Music unites a mother and newborn separated by COVID-19

A COVID-19 patient has been separated from her newborn baby for nearly a month, but Houston Methodist music therapists help them bond through a heartbeat song

Music unites a mother and newborn separated by COVID-19 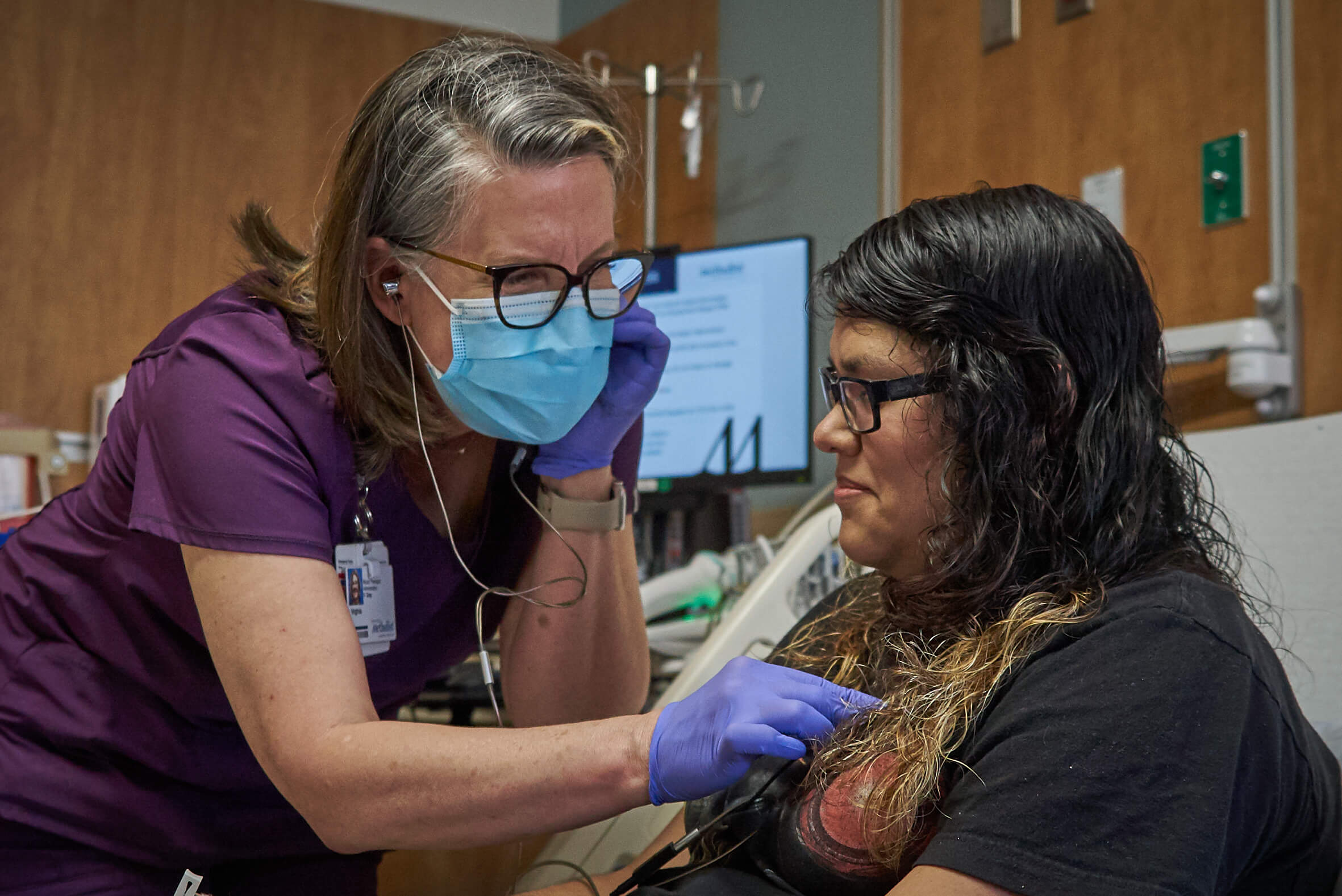 Emelia Herrera tested positive for COVID-19 in her third trimester.

On April 8, at 35 weeks pregnant, the Cypress resident started feeling feverish and began to have trouble breathing. Her oxygen levels were plummeting on her oximeter, so her husband, Erick, rushed her to the emergency room.

Cradling her pregnant belly, she arrived at Houston Methodist Willowbrook Hospital, agitated and gasping for air.

“I remember walking in and I could hardly talk,” Herrera recalled. “They didn’t even put me in the waiting room. They just took me straight [back] and started giving me oxygen. I basically blacked out after that.”

Three weeks later, Herrera regained consciousness at Houston Methodist Hospital in the Texas Medical Center, but sensed immediately that something was different: She didn’t feel her baby inside her.

Doctors had performed an emergency C-section the same day she was admitted to the hospital after realizing her condition was deteriorating quickly. There wasn’t a moment to lose if they wanted to save Herrera and her baby.

Although Herrera has no recollection of it, she gave birth to a healthy baby girl.

“It hurt that I didn’t get to experience giving birth to my daughter. I just felt like my daughter was missing a part of me … without getting to meet me,” she said. “It was heartbreaking.”

Because Herrera’s health was spiraling downward, doctors put her on a respirator and sent her to the intensive care unit (ICU), where they connected her to an extracorporeal membrane oxygenation (ECMO) machine to take over the function of her lungs and heart.

The couple, avid fans of DC Comics, had already agreed to name their newborn Selina, after Selina Kyle, Catwoman’s alter ego and Herrera’s favorite comic book character. Uncertain of whether or not Herrera was going to make it, her husband decided to use Herrera’s first name as their daughter’s middle name.

“He wanted her to have a part of me no matter what happened,” Herrera said.

She spent 18 days in the ICU, isolated from her husband and their 3-year-old daughter, Helena, also named after a DC Comics character. To this day, Herrera has not been able to hold—or even meet—baby Selina.

But two days after Herrera awoke, her physician reached out to Houston Methodist music therapists Virginia Gray and Jennifer Townsend about using music to help Herrera heal from her traumatic birth experience and the emotional turmoil of being separated from her newborn baby.

“I wanted it to happen right away because you just never know with this disease … if it’s going to be a positive outcome,” Gray said. “I just knew I needed to do it.”

‘A little piece of me’

Gray and Townsend decided to create a heartbeat song for baby Selina.

“The goal was to bring a sense of bonding from mother to baby and baby to mother,” Townsend said. “We know that baby has been hearing mom’s heartbeat millions of times while in the womb and that mom’s heartbeat is going to be a comfort to baby. ”

They recorded Herrera’s heartbeat using a stethoscope and extracted two very clear beats from the audio—da-dun, da-dun. Then, they combined the heartbeats with piano instrumentals to the tune of “Twinkle, Twinkle Little Star,” with Gray singing the lyrics.

Herrera’s voice was still raspy from being intubated and it hurt her to speak, but she mustered the strength to say the words “I love you, Selina” for the recording.

Gray and Townsend placed the heartbeat song onto a recordable heart—similar to those in stuffed teddy bears—and gave it to Herrera’s mother, who was taking care of Selina at the time.

“I honestly felt like my daughter was missing out on me,” Herrera said. “Just knowing that if she can have my heartbeat next to her, that will give her a little piece of me.”

Every day, Selina falls asleep in her crib at home, lulled by the sound of her mother’s heartbeat and voice.

“Her baby had this tangible piece of mom that was with her,” Townsend said. “Typically, we would want to also give baby something that smelled like mom, like a shirt or something that mom was wearing, but in this case that wasn’t safe [because of COVID-19]. The best we could do was give her this auditory piece of mom.”

The power of music

Studies have shown that music helps people self-regulate emotions and may even alleviate feelings of depression.

At the intersection of art and medicine, music therapy provides clinical, evidence-based interventions in the form of song, especially for those who feel estranged or traumatized.

“It’s difficult to put trauma into words,” Townsend said, “but we often can access what we’re feeling in music and in the arts … because the arts are a sensory experience.”

Exposure to the sounds of a mother’s heartbeat and voice significantly improves the development of a baby’s auditory cortex, the region in the brain’s temporal lobe responsible for hearing and language, according to a 2015 study by neuroscientists at Harvard Medical School. In addition, infants exposed to the sound of their mothers’ heartbeats were more relaxed and experienced decreased heart rates.

Another study showed that the sound of a mother’s heartbeat reduced the heart rate of preterm infants by an average of 4 beats per minute throughout the first month of their lives.

“Music connects us to our memories, and we can utilize that for mood modulation,” Townsend explained. “It all happens in a split second, and we don’t always have a conscious effort around it.”

Running home to you

For the third song, the music therapy duo recorded two of Herrera’s heartbeats, synched them with two of her husband’s heartbeats, and paired that with the song, “Running Home to You” from the CW television superhero series The Flash, one of their favorite shows.

The song’s title and lyrics, Herrera said, captured her unwavering determination to reunite with her family.

“I started crying because that’s our song,” she said.  “That’s what I was trying to do. I was trying to fight this disease, this virus, so I could go back to my family. I push myself every single day.”

Herrera is still in physical therapy. After nerve damage in her foot left her unable to walk, she’s been working on regaining her mobility. Each step brings her closer to her family.

Soon, she will hold baby Selina in her arms.

“I love her so much, and I can’t wait to meet her,” Herrera said.