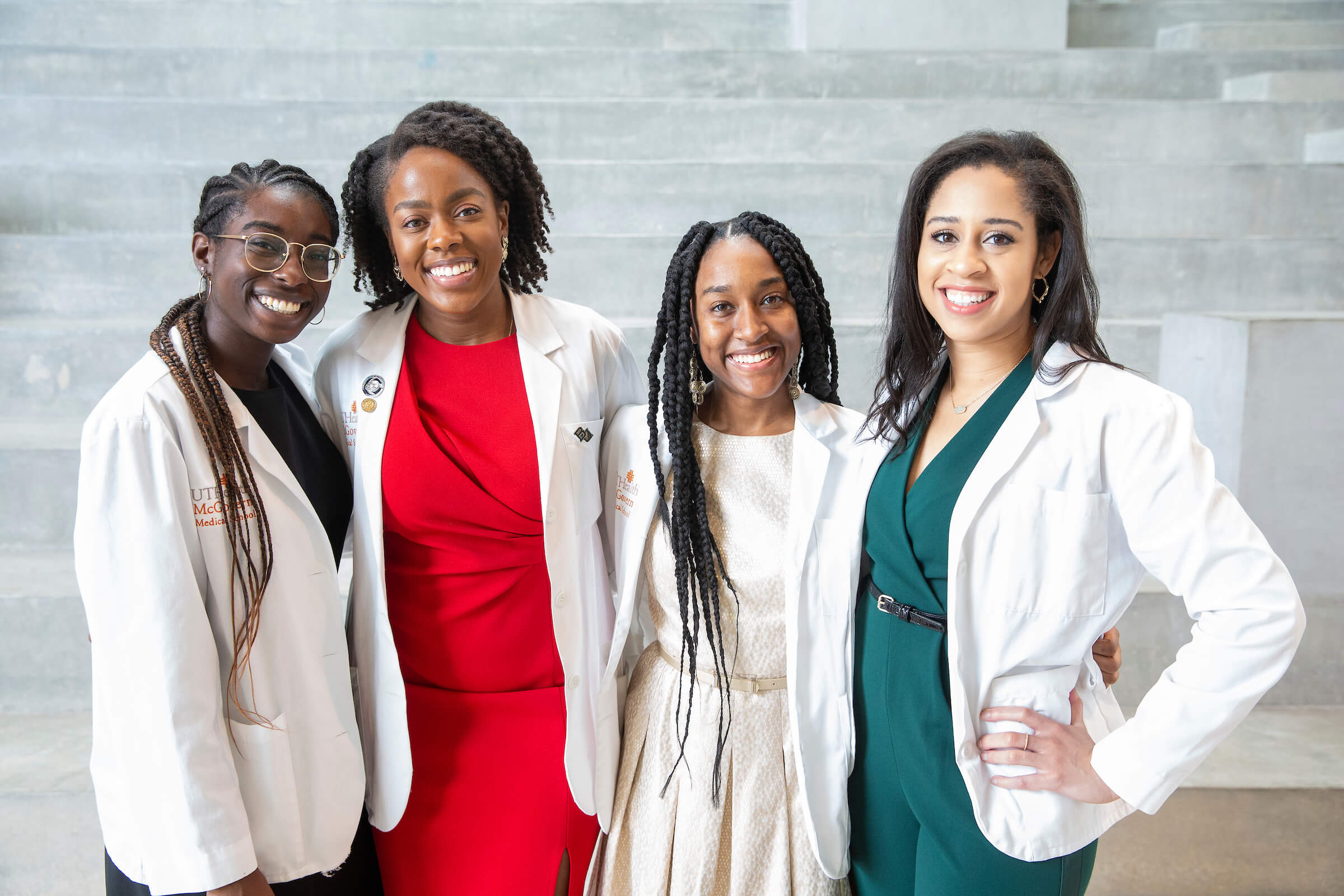 Sandra Coker, M.D. knew since childhood that she wanted to become a doctor, but the 25-year-old didn’t meet a physician with brown skin until she went to college.

“I had to navigate the pre-med road on my own,” said Coker, a 2020 graduate of McGovern Medical School, which is part of The University of Texas Health Science Center at Houston (UTHealth). “I didn’t grow up seeing mentors or physicians or anybody who looked like me in the position I wanted to be in. I had to do a lot of Google searches—a lot of asking around to people I didn’t know if I could trust or not—trying to find my way.”

To solve that problem for others, she dreamed up  “Black Girl White Coat”—also known as BGWC—a Houston-based movement focused on mentorship, motivation and representation. What started in August 2016 as a Facebook post followed by a seven-minute personal YouTube video quickly grew into an Instagram following, a vlog (video log) and a website. Today, BGWC has a mentoring program and momentum.

“With Black Girl White Coat, I wanted to make sure that someone who was like me or somebody with my background who didn’t have access to mentors or proper advisors would have a resource to go to that’s completely free and completely transparent about how to navigate these waters,” Coker said. 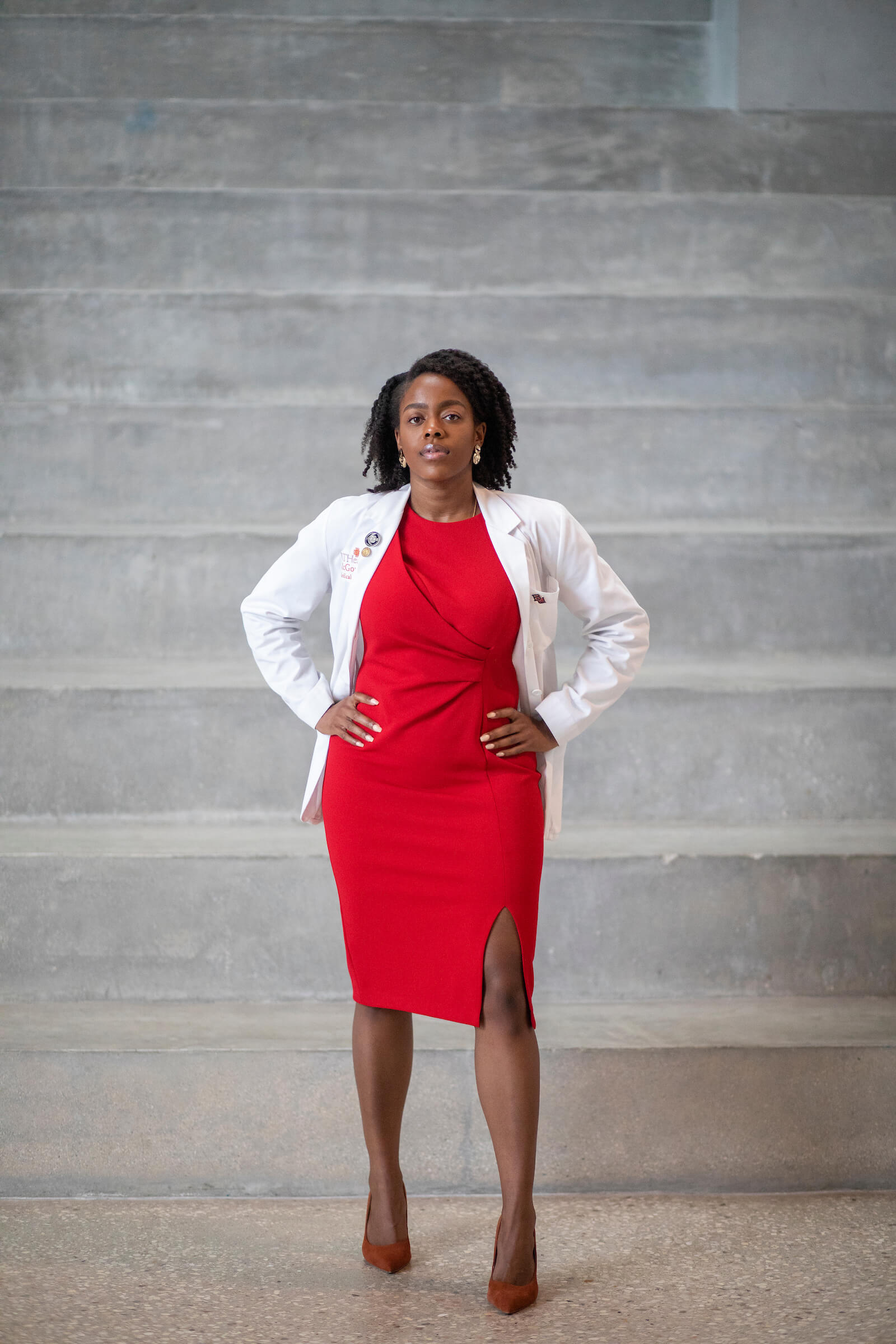 Black Girl White Coat founder Sandra Coker, M.D., in red, leads a Houston- based mentoring movement powered by supporters and colleagues. She is a 2020 graduate of UTHealth’s McGovern Medical School.

Biosha Jones, M.D. a 2020 McGovern alumna headed to an emergency medicine residency at Loma Linda University in California, was an early BGWC supporter.

“Representation matters. What we see when we are little is very important. When we see people who are positive role models working in jobs that require a lot of sacrifice, that ends up doing a lot of service for people of color,” she said. “We need to support initiatives that pour into the lives of little black girls and little black boys who need those role models.” 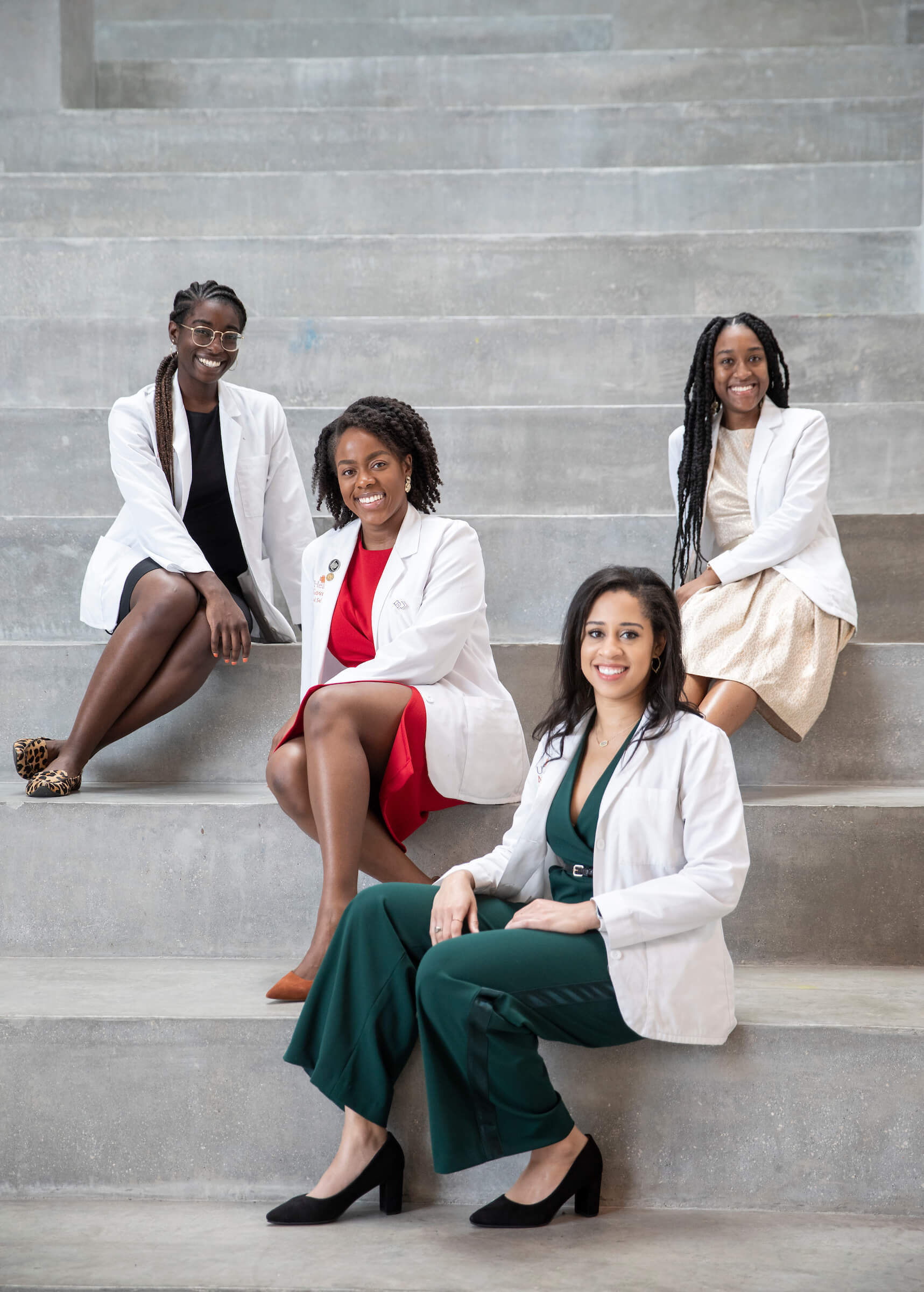 Nationwide, nearly 93,000 students were enrolled in U.S. medical schools for the 2019-2020 academic year, according to data from the Association of American Medical Colleges (AAMC). Of those, just 7 percent were Black. The U.S. population is about 13 percent Black, according to the U.S. Census Bureau. Among Black medical students, 61 percent were women and 39 percent were men.

AAMC’s 2019 Diversity in Medicine report notes that while women have surpassed men among medical school students over the last four decades, “gains in diversity were not shared by all groups. In particular, the growth of Black or African American applicants, matriculants and graduates lagged behind other groups.” More than half of the nation’s medical school faculty members are male and Anglo, as are most of the active physicians in the United States.

Those layers of disparity have inspired other see-it-to-be-it efforts designed to increase the nation’s number of black physicians and other health care professionals. Those include “Black Men in White Coats”—a national effort to expand interest in medicine and produce black male physicians—as well as the work of Tanisha Terry, a neonatal travel nurse from Houston, who founded the “Black Girls White Coats” blog to celebrate nursing and the jet-set lifestyle.

Born and raised in the Houston area, Coker graduated from Dulles High School in Sugar Land and finished a psychology degree on the pre-med track at Baylor University in three years. She used what would have been her final undergraduate year to apply to medical school and explore the working lives of physicians as a medical scribe in the emergency department at Memorial Hermann Southeast Hospital.

Shortly after starting medical school in 2016, Coker learned that involvement in research would help burnish her residency applications. She searched the McGovern website to identify professionals in emergency medicine, her chosen specialty.

“I looked for anybody who looked like me and I just started sending emails. Dr. Mandy Hill replied very quickly. We met up that same week and we hit it off. She’s energetic, she’s passionate about health care disparities, sexual health education and African American women and substance use. I told her about Black Girl White Coat and she was an instant supporter,” Coker said. “Through the research that we’ve done, she allowed me to enter environments and conferences where I was rubbing shoulders with African American physicians.”

“She met me with enthusiasm and confirmed everything I wanted to become—all my aspirations. She was the blueprint for me,” Coker said. “I want to be that mentor, someone who is going to hear someone’s wildest dreams and say: ‘How can I help you?’ That’s what BGWC has been, is and will continue to be.”

Coker has recruited mentors, including Jones and other friends from medical school, who now offer advice to 300 mentees across the country. Early on, they also donated study materials for the MCAT, the Medical College Admissions Test.

Currently, Coker is mentoring a young mother with a bachelor’s degree who is working on her prerequisites so that she can apply to medical school.

Two years ago, Coker decided to offer financial support with the Black Girl White Coat Representation Matters Scholarship. She raised money through her website and by selling BGWC T-shirts.

The first scholarship, for $500, was granted in 2018 to an African American woman undergraduate in Maryland who has applied to medical school. In 2019, there were two $500 awards. The recipients were a Hispanic mother switching careers to become a physician assistant and an African American woman undergraduate deciding between medical school and becoming a physician assistant.

Coker now aims to raise $5,000 in 2020 for more scholarships and larger awards to help people in underrepresented groups pursuing health care professions. She also plans to turn the movement into a nonprofit organization before she starts her residency in emergency medicine this fall at the University of Chicago.

On a day in March this year—as fourth-year students a few weeks before graduation—Coker and Jones gathered with Christle Nwora, M.D. and Katherine McElroy, M.D. at the Museum of Fine Arts, Houston, for a BGWC photo shoot in their white coats.

They represented a visual spectrum of brown-girl magic: braids and twists, heels and flats, dresses and a belted jumpsuit.

During one pose, the four locked arms over their shoulders and someone spontaneously started to sing the “Girlfriends” sitcom theme song. The rest of the quartet quickly joined in, radiating confidence and camaraderie.

Visit blackgirlwhitecoat.org to learn more about Black Girl White Coat, to participate or to give.