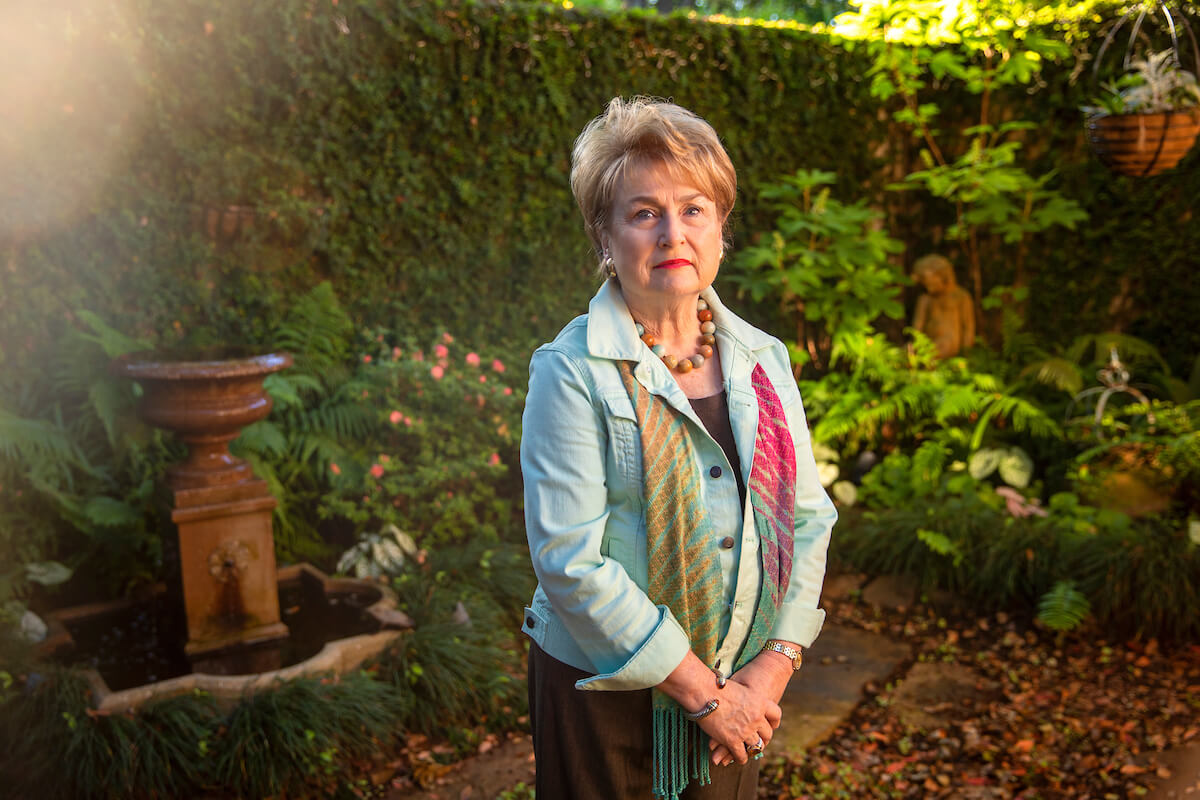 In early March, Patsy Clapp drove to Tyler, Texas to visit a brother who has Parkinson’s disease. She left on March 5, spent three days in Dallas and returned to Houston on March 8.

By then, COVID-19 cases related to international travel had been confirmed in Houston and concern was growing about the health status of individuals who had made domestic trips. SXSW in Austin, one of the largest music, film and media festivals in the world, had been canceled and “social distancing” had entered the general lexicon.

The global pandemic was no longer an international news item. The coronavirus was here.

Clapp, a 74-year-old bone marrow cancer patient who beat breast cancer two decades ago, prepared to stay close to home for a while. She visited Cornelius Nursery on Voss to buy oakleaf hydrangeas, begonias and caladiums for her townhouse courtyard so that she could have some fresh color around her bubbling fountain and late-blooming azaleas.

“I learned how to do home delivery from HEB and got my groceries ordered in,” Clapp said. “I purposely did not see my children or my grandchildren.”

The longtime antiques dealer also got her hair done.

Those would be the last of her usual activities for weeks.

Clapp started feeling ill on Tuesday, March 17. Her cascading symptoms began with a fever, a bad headache and fatigue. She stopped eating because of nausea and other gastrointestinal issues, but she didn’t have the signature COVID-19 cough.

“I lost my appetite to even drink water for five days,” she said.

But the fatigue hit her the hardest.

“I am usually very high energy,” Clapp said. “I had friends and family checking on me all the time and I didn’t even have the energy to return texts or emails. I just was zapped. My body ached. … I felt as bad as I have felt since I delivered my twins au naturel.”

On Friday, March 20, she called her internist’s office. The voicemail message advised her to go to the emergency room.

“But of course, that was 180 [degrees] from what the TV was telling us to do. They were saying to stay away from the emergency room,” Clapp recalled.

The weekend passed with no improvement in her symptoms. By then, Clapp was exceedingly dehydrated. Her internist called on Monday morning and sent her to the Houston Methodist Emergency Care Center at Kirby and U.S. 59. She was tested for COVID-19.

“They were going to put me in the hospital, which I was not pleased about, but I stayed five hours and they determined I could go home,” she said.

She left the ER with an IV and a few bags of saline. On her way home, she went to a CVS drive-through to fill a prescription for anti-nausea medication and bought a store-brand bottle of acetaminophen because the Tylenol was sold out.

The next morning, someone from Houston Methodist called to tell Clapp she had tested positive for COVID-19.

She notified her Methodist hematologist and was advised to cut her doses of oral chemotherapy in half. The medication reduces the white blood cells her immune system needed to fully fight the coronavirus. She also contacted her relatives and her hairdresser about the diagnosis.

Her internist declined to prescribe hydroxychloroquine, which has been touted by President Trump and some others as a potential treatment.

“She said: ‘No, I’m not going to give that to you. We’re just going to wear it out,’” Clapp recalled.

As a high-risk, older patient, Clapp needed to be monitored. She received a call or text almost daily from Houston Health Department (HHD) epidemiologist Tahani Hamdan. 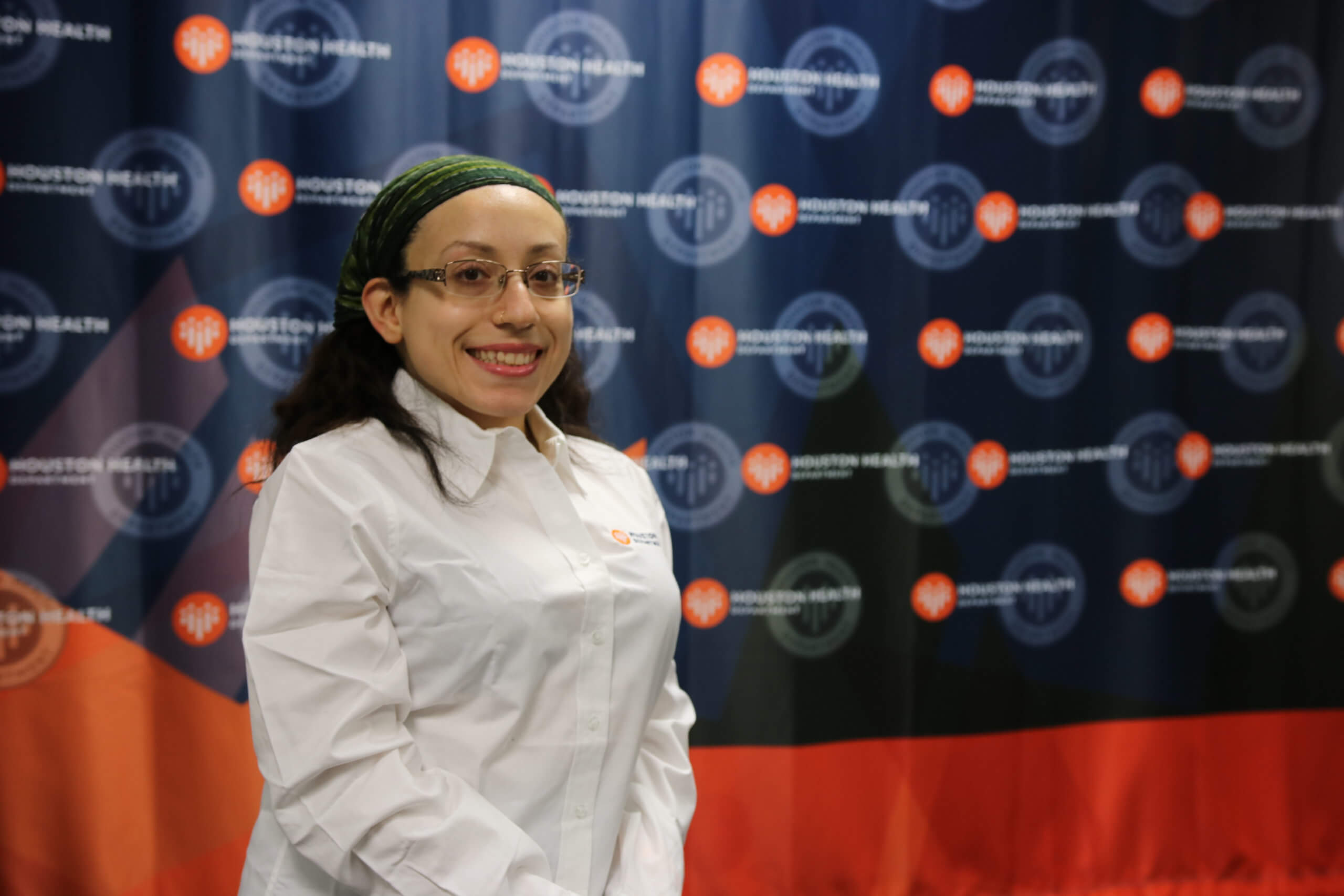 “I had this illness that’s sweeping the nation and killing everybody, particularly the elderly,” Clapp said. “The only thing that scared me is that all of these people were dying. That’s all you heard on the TV. What do you do when you’re lying in bed listening to the TV?”

“They were loving, gracious, compassionate and concerned,” Clapp said. “I have been so cared for … by these two city servants who went so far above and beyond.”

The Houston Health Department receives reports of COVID-19 infection from hospitals and labs. That data is tracked by the agency’s informatics team.

Hamdan and other city health department epidemiologists are responsible for the follow-up investigations that wrap flesh and emotion on the numbers. Every “person under investigation” or PUI who has been diagnosed is contacted directly or via caregivers or through the hospital. The epidemiologists are tasked with tracking those individuals until they recover as well as others who have been exposed.

All of these duties during a pandemic have made the roles of public health professionals more prominent.

“We have phone duty, so we talk with the doctors, we talk with the nurses and medical staff. We do a lot of investigations over the phone with the patients,” said Hamdan, who previously followed up on maternal and child Zika infections.

So far, there have been two dozen confirmed COVID-19 deaths in Houston. There are more than 2,000 active cases in the city and 260 confirmed recoveries.

In many ways, Hamdan’s job now is to calm uncertainty and clarify confusion for patients like Clapp.

“These are people that matter. They are worried about their lives and their families,” the epidemiologist said. “COVID-19 has taken a toll on a lot of people mentally, emotionally and physically. A lot of people are scared.”

Hamdan, who has a master’s degree in public health and worked her way up from an intern with the agency over the last four years, speaks with a soothing and assuring voice.

“Sometimes, we laugh with them. We cry with them. I would say we’re here to serve, educate, investigate as well as comfort,” she said. “I oftentimes have to find my strength to try to comfort the patients and at the same time I’m muffling my cries hoping they don’t hear me because I don’t want them to be more fearful because I know they’re seeking guidance. It’s just the human factor.”

Clapp was tested for COVID-19 four times. The first was at the emergency center on March 23, which was confirmed on March 24.

Once she started to feel better, she needed to take another COVID-19 test to see if she had kicked the virus. Neighbors didn’t know about her diagnosis and she didn’t want someone showing up in head-to-toe gear to reveal her predicament. Still, Clapp left her gate open and Garcia slipped onto the property along the side of the house for that second test—the first from HHD. Garcia, who is also a nurse, was clad in personal protective equipment (PPE).

“I stepped out in the courtyard and she swabbed my nose,” Clapp said. “She undressed and put all the things in the plastic bag, and she left and I got the plastic bag and put it in my trash. That’s what she did for me three times.” 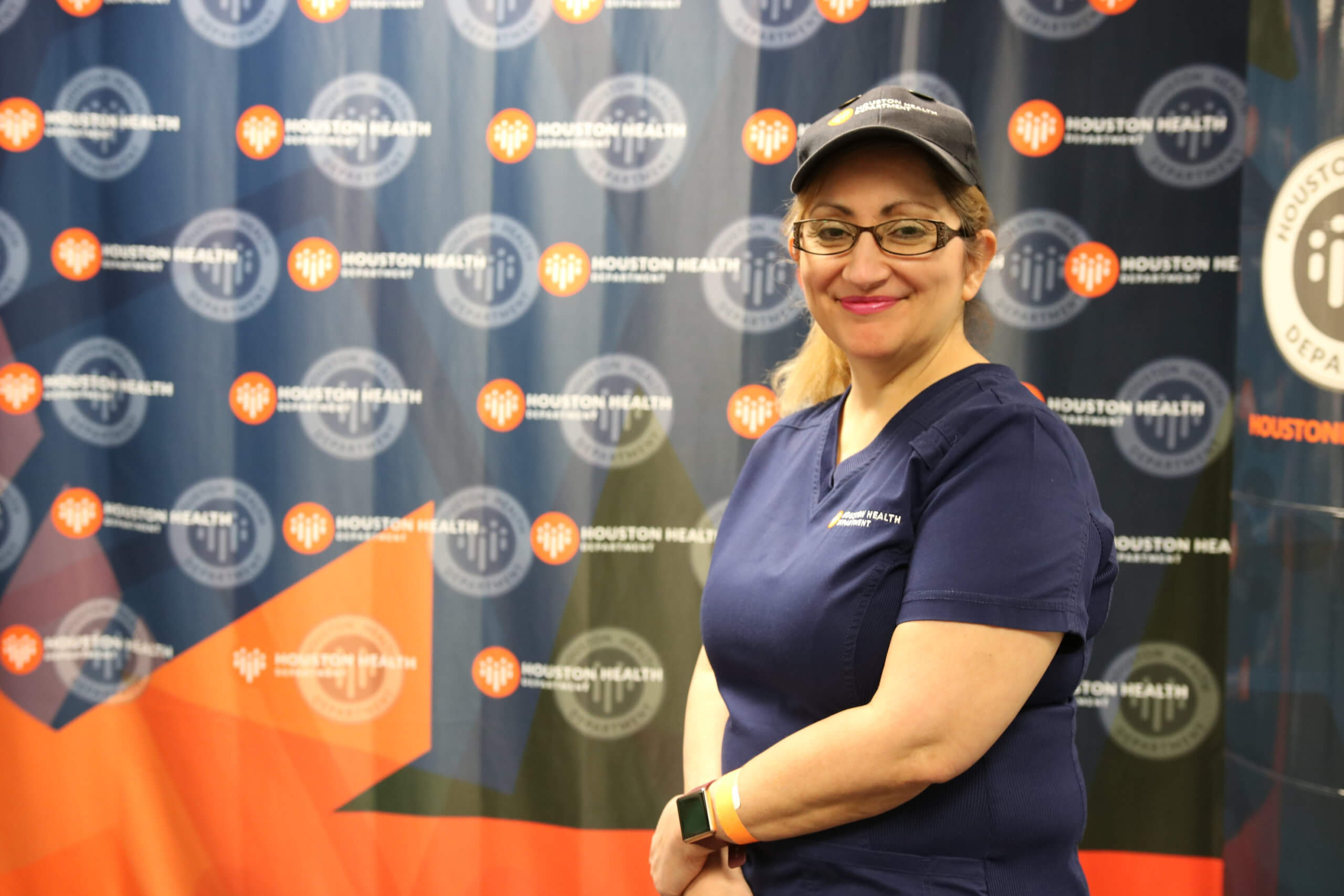 Teresa Garcia, a nurse who works as a Houston Health Department surveillance investigator, has been testing COVID-19 patients at home. (Courtesy HHD)

Clapp’s second test on April 1 was still positive. Flunking the first test after COVID-19 symptoms abate isn’t unusual because patients with compromised immune systems take longer to slough off the virus. But, that result meant a delayed return to full doses of chemo.

Clapp was tested at home again on April 8 and got a negative result on April 9. A fourth test on April 10 returned another negative on April 11.

“I was clear,” she said, adding that she immediately resumed her full doses of chemo to treat her bone marrow cancer. “I am so appreciative for what Tahani and Teresa did to expedite getting me two negatives.” 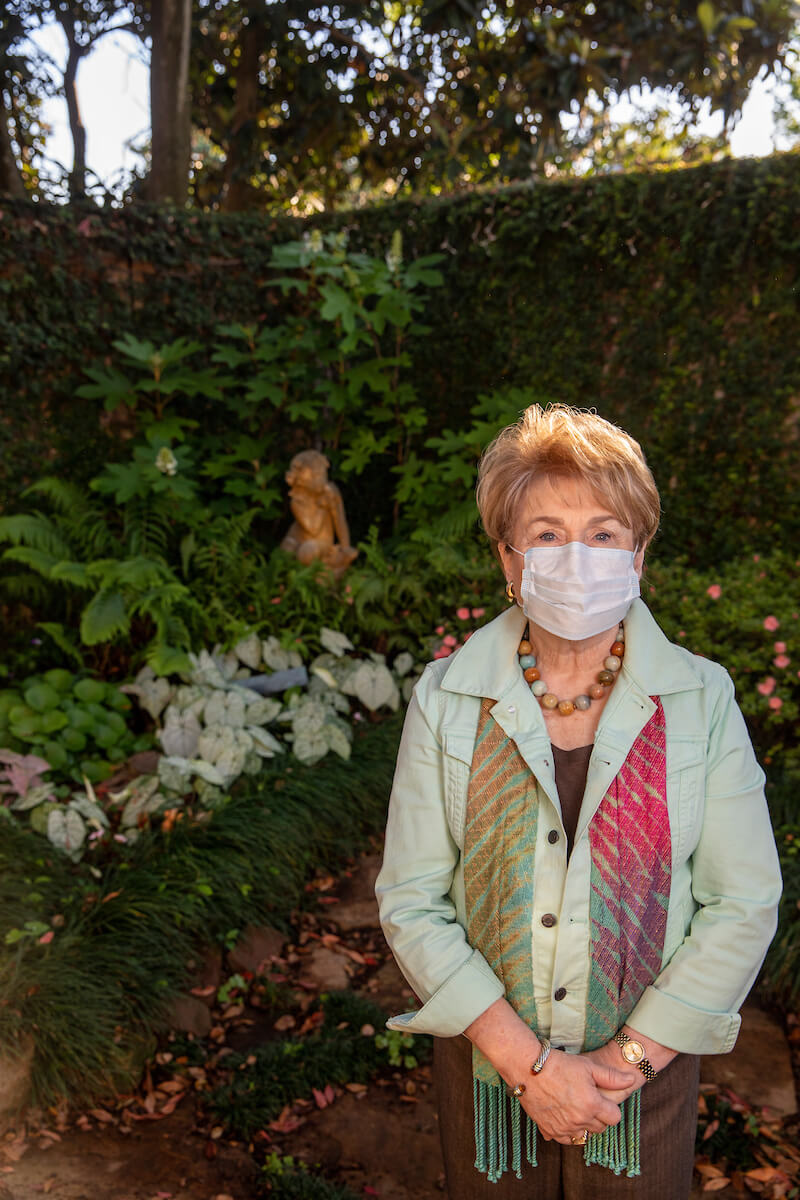 In an email to the Houston Health Department, Clapp commended Hamdan and Garcia for the attention and care she received:

“I want you to know what exceptional public servants you have with employees Tahani Hamdan and Teresa Garcia. … Tahani has called or texted almost daily. Her attentive and sincere manner has sustained me. Nurse Teresa Garcia has courageously come to my patio twice to retest me with such a gracious and loving spirit. I am 74 years old and a cancer patient, yet seldom have I felt such devotion and compassion. These ladies are a tremendous asset to the City of Houston Health Department. I remain so grateful for their care.”

During the illness, Clapp lost her sense of smell.

“It is returning now. I think it’s probably about 30 percent, but that’s an interesting complication of this illness,” she said, adding that she also lost a few pounds.

“That’s the only way I could ever lose it, I think,” she laughed. “I essentially fasted for five or six days until they gave me some anti-nausea medication.”

Now, Clapp says she feels “great” and is reclaiming her life under the stay-at-home order, reflecting on the ordeal and hoping to explore whether her blood contains antibodies that could help treat other COVID-19 patients.

Although she understands that most people with the virus recover, she is grateful that she survived without spending several days in the hospital.

“It’s usually people like me who have an underlying condition … that don’t make it,” she said. “My faith really sustained me. It’s always been important in my life and I feel like I had God’s hand on my shoulder the whole time.”

She can only guess where or when she was infected with the virus.

“I’ll never know where I got it. I do not think it was in Tyler or Dallas. None of those people have come down with it,” she said. “I think it’s very likely that I got it pumping my own gas a block from my house.”