Scientists are using the genetic models to study human diseases 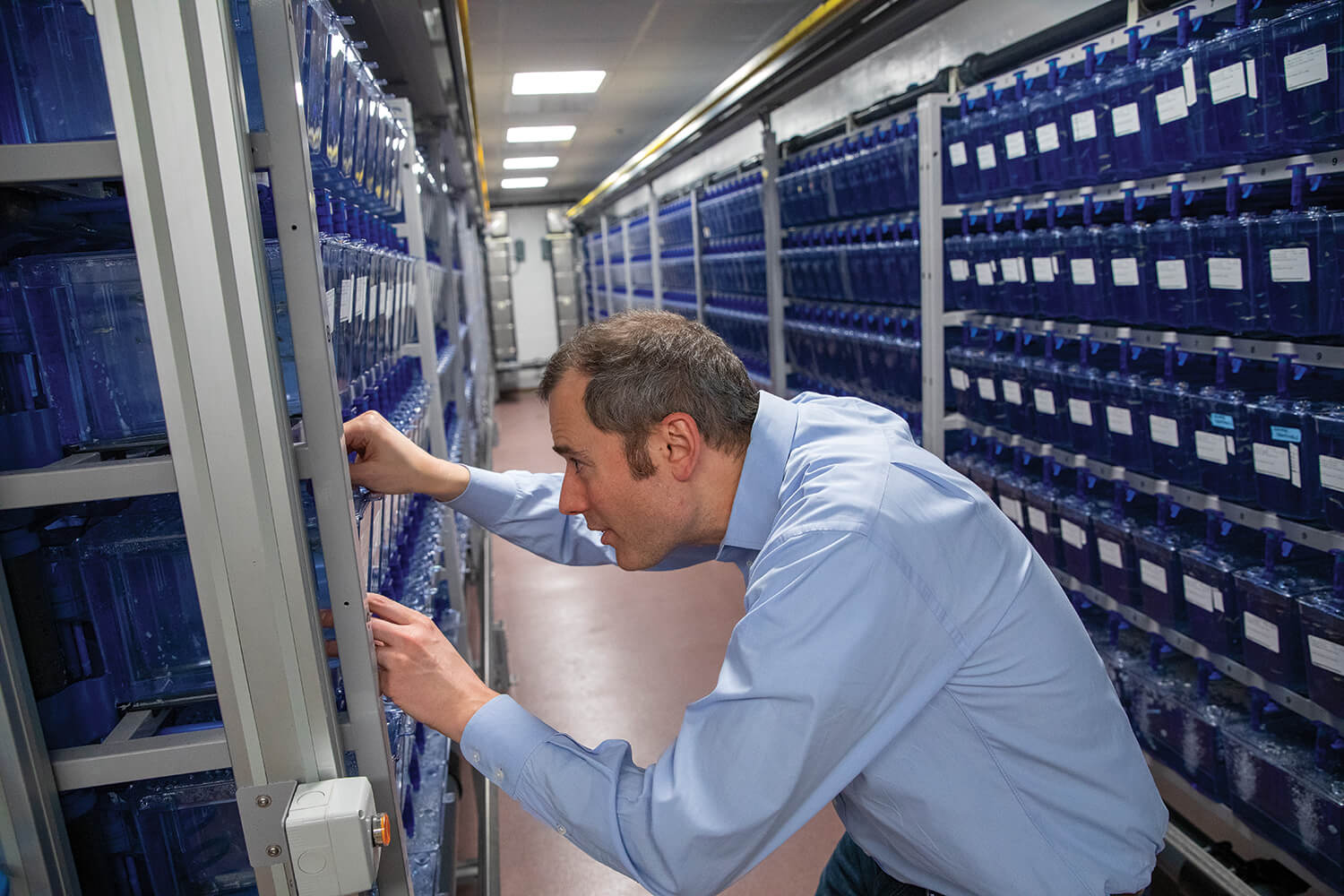 Iridescent blue-striped zebrafish dart back and forth in tiny tanks stacked floor-to-ceiling in the basement of the Baylor College of Medicine. The freshwater minnows—some 13,000 strong in their watery studio apartments—play an integral role in innovative biomedical research.

They are part of the Gorelick Lab, one of more than 3,250 sites in 100 different countries using zebrafish to advance medicine and better understand human diseases. Led by Daniel Gorelick, Ph.D., assistant professor in the department of cellular and molecular biology at Baylor, the lab studies zebrafish to learn how certain hormones and chemicals affect the development and function of the human heart and brain, as well as other tissues. 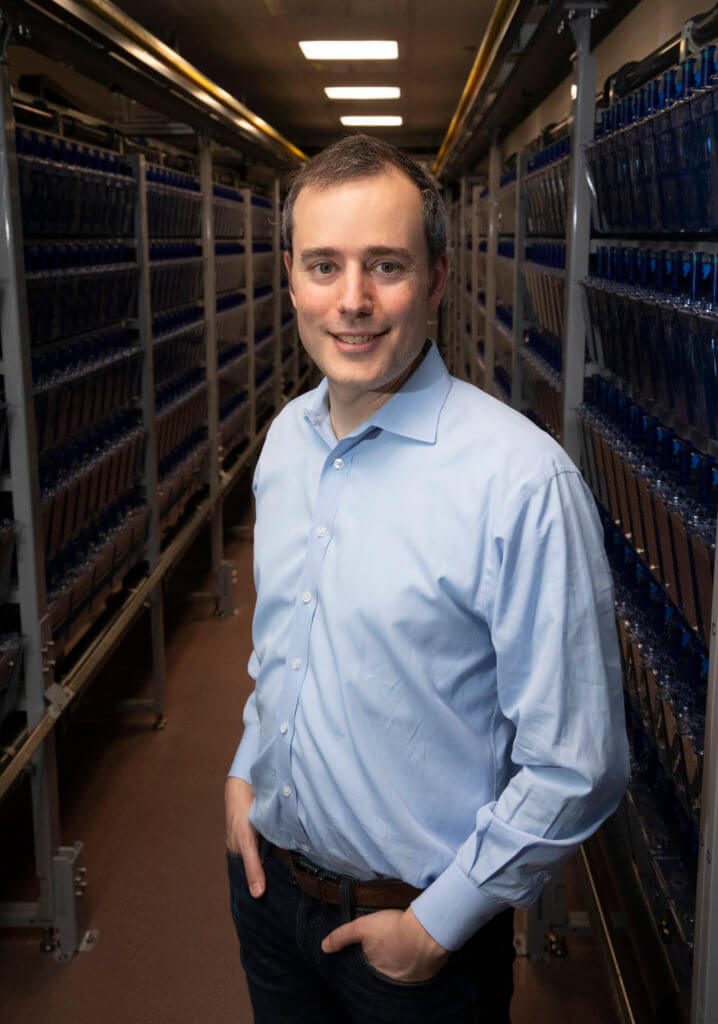 Gorelick in the lab.

Although science and technology are constantly evolving, zebrafish have remained relevant research tools for almost 50 years. Today, scientists are harnessing the power of CRISPR-Cas9 technology—which can edit segments of the genome by deleting, inserting or altering sections of the DNA—to generate specific mutations in zebrafish.

“This has been a huge advance because it allows us to create mutant strains of zebrafish that have the same mutations as are found in a human disease,” said Gorelick, whose lab is housed in Baylor’s Center for Precision Environmental Health and is currently undergoing an expansion to accommodate as many as 30,000 fish.

In addition, scientists have long sought to map the cell-by-cell progression of animals, in pursuit of understanding how a single cell develops into trillions of cells that make up an intricate biological system of organs. With single-cell RNA sequencing, a technology named Science magazine’s 2018 Breakthrough of the Year, scientists are able to track the different, intricate stages of embryo development in unprecedented detail, allowing researchers like Gorelick to study the cascading effects at the cellular level.

“There’s just so much evidence now that a lot of the drugs that are effective in humans are also effective in [zebrafish], so people are now starting to use fish to discover drugs,” Gorelick said. “You want to know, if you’re taking a drug or you’re exposed to some pollutant, does that cause birth defects? How does that affect the life of humans? … We can use [zebrafish] as research tools to understand how the chemicals normally work in a normal embryo.”

Regenerative heart
Zebrafish are named for the colorful horizontal stripes on their bodies, and can grow from 1.5 to 2 inches in length. The tropical fish are native to South Asia.

On the surface, zebrafish appear nothing like humans, but 70 percent of the genes in humans are found in zebrafish and 84 percent of human genes associated with human disease have a zebrafish counterpart, studies show.

George Streisinger, an American molecular biologist and aquarium enthusiast, pioneered the use of zebrafish in biomedicine at the University of Oregon in 1972. His breadth of knowledge about zebrafish laid the groundwork for research methodologies, including developing breeding and care standards and creating tools for genetic engineering and analysis. He performed one of the first genetic screens of zebrafish by using gamma rays to randomly mutate the DNA of certain zebrafish and identify offspring that had notable phenotypes, such as pigmentation defects.

“That caused a big explosion in the field and then that’s when things really took off,” Gorelick said.

Zebrafish are now used as a genetic model for the development of human diseases, including cancer, cardiovascular diseases, infectious diseases and neurodegenerative diseases—to name a few. Housed down the street from Gorelick’s lab, John Cooke, M.D., Ph.D., is using zebrafish to study atherosclerosis, the major cause of heart disease in the country. Although zebrafish have only one ventricle to pump blood to the heart, whereas humans have two (a left and a right ventricle), their vasculature is very similar to humans.

Cooke hopes that studying the regenerative capabilities of the zebrafish heart will lead to new discoveries that help human patients.

“You can remove 20 percent of their heart, and they can regenerate it,” Cooke explained. “Why is that? We want to know. There are groups that are studying that amazing regenerative capacity of the [zebrafish] heart, and those insights obtained from that work may lead us to new therapies for people to regenerate the human heart or, at least, improve the healing after a heart attack.”

Watching cells migrate
Although mice are genetically closer to humans than zebrafish, sharing 85 percent of the same genomes, zebrafish have a few key advantages for researchers.

On average, zebrafish produce between 50 to 300 eggs, all at once, every 10 days. Their rapid breeding allows scientists to quickly test the effects of genetic modifications (such as gene knockouts and gene knock-ins) on current fish, as well as ensuing generations.

In addition, zebrafish are fertilized and developed externally, meaning the sperm meets the egg in the water. This allows scientists to access the embryos more easily, as opposed to mouse embryos that develop inside the womb. In one of his research projects, Gorelick simply adds drugs to the water to see how the zebrafish are affected.

“Most drugs in the water will get taken up by the embryo,” Gorelick said. “We add it into the water and it gets taken up the next day when they’re just one day old. … All of that discovery happened in zebrafish because you can literally watch it live.”

Not only do zebrafish embryos develop quickly, they are also transparent. Within two to four days, a zebrafish will develop all its major organs—including eyes, heart, liver, stomach, skin and fins.

“We can literally watch these cells migrate from different parts of the embryo, form the tube, constrict, form the hourglass, loop on itself, beat regularly and see blood flow all at the same time,” Gorelick said. “When there’s a belly and a uterus, you don’t have access. You can use things like ultrasound, like we do with humans, but … you can’t get down to single-cell resolution like we can with the fish.”

Ultimately, zebrafish have proven to be a powerful resource for researchers. Although all zebrafish studies are confirmed in rats and mice, followed by human tissue, they constitute a significant stepping stone.

“You wouldn’t want to build a house only using a hammer and a screwdriver. I want a power drill and I want a band saw,” Gorelick said. “Fish are part of that. … They’re not a cure-all. They’re not the only tool, but they’re an important tool.”