What we still don’t know about COVID-19

What we still don’t know about COVID-19 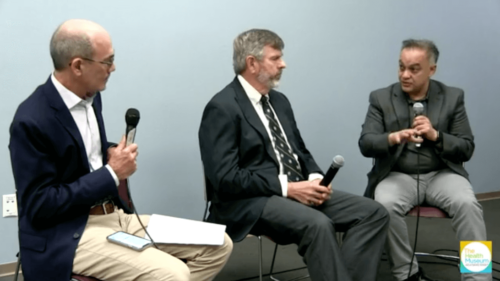 On March 11, 2020, soon after the Houston area identified its first COVID-19 case spread by community contact, Houston Mayor Sylvester Turner and Harris County Judge Lina Hidalgo declared a public health emergency. Since then, local government officials and medical leaders have encouraged residents to practice social distancing in order to slow the spread of the disease, which is caused by a new strain of coronavirus closely related to severe acute respiratory syndrome (SARS).

Health experts continue to remind the public that the evolving pandemic has produced more questions than answers and might have been prevented.

“One of the shames of this outbreak is that most of us studying these kinds of viruses could have predicted in 2003, right after the original SARS outbreak, that this was not going to be the only time that there were other coronaviruses circulating,” said Scott Weaver, Ph.D., director of the Institute for Human Infections and Immunity and scientific director of the Galveston National Laboratory at The University of Texas Medical Branch at Galveston (UTMB). “If we had sustained the effort to develop a SARS vaccine, that vaccine, if it were already approved, might very well protect against this coronavirus. But unfortunately, those efforts and the funding for them dried up years ago.”

Weaver and Umair Shah, M.D., MPH, executive director of Harris County Public Health, answered questions about the novel coronavirus in a discussion that was livestreamed on The Health Museum’s Facebook page and moderated by John Arcidiacono, president and CEO of the Health Museum.

COVID-19 is part of a family of coronaviruses that, for the most part, causes mild disease, Weaver and Shah said. The most vulnerable groups are seniors and those with underlying medical conditions or weakened immune systems.

“The vast majority of people are going to be asymptomatic or have mild symptoms,” Shah said. “There’s a subset of the population that can have more complications and that’s the group that we really want to focus our attention on.”

Weaver agreed, adding that infection without symptoms makes it difficult to understand the trajectory of the pandemic.

“We don’t know how many people are asymptomatically infected,” he said. “We do know that at least some of them can spread the virus to other people, who may become symptomatic—especially the high-risk, older-age groups.”

But it’s hard to trace contacts and patterns of spread, he added, when there are asymptomatic people.

“We don’t have the testing capacity to do that, to begin with,” Weaver said. “We probably just don’t have the manpower to do that. … The next frontier in diagnostics is developing a way to find out if people have been infected in the past.”

The two main strains of the novel coronavirus that have been identified are known as “S” and “L.”

“S and L differ by two amino acids—those are the building blocks of the proteins in the virus,” Weaver said. “I think, in reality, there’s very little evidence so far that there’s any meaningful difference between those strains. … It’s too early to know if … these two differences have any effect on the way the virus replicates and causes disease.”

Another question experts cannot answer: How long will immunity protect you after you’re infected with the novel coronavirus?

“Some of the coronaviruses that infect us year after year and cause the common cold, we lose immunity over time and they can re-infect us,” Weaver said. “A very important question to try to understand once this outbreak peaks: Will a vaccine protect us for a long time or a short period of time?”

Seasonal change could also have an impact on the spread of the disease.

“All of the respiratory viruses that cause the common cold or influenza, they have seasonal patterns,” Weaver said. “They usually get started in October and, by the end of April, most influenza transmission is gone. We don’t completely understand why we see that pattern. Part of it is, viruses, in general, survive longer in cool, dry places. They may just be more stable during the winter. … That’s a hopeful reason to believe the transmission of this coronavirus will be suppressed a little bit as we move into the summer. But, it could very well come back with a vengeance in the fall when conditions are better for survival and spread.”

Managing the disease is not just about getting tested, Shah said.

Until the middle of March, tests were run through the Houston Health Department’s lab, which serves a 17-county region. But new testing sites have opened up in recent weeks.

“Now we have additional laboratory capacity,” Shah said, “or you can go to a health care provider or go through private commercial labs. … But we don’t want people to show up and say, ‘I just want to get a test.’ If you are without symptoms, it’s actually a little bit dangerous to get the test done … because three to five days later, when you actually do have symptoms, you have a false sense of security because your test result was negative.”

When will a vaccine be ready?

Weaver foresees a few challenges in developing a vaccine to treat COVID-19.

“Typically, to take a vaccine from development of the idea, to testing in animals, to going through three phases of human clinical trials costs hundreds of millions of dollars,” he said. “The government doesn’t usually pay that cost—the pharmaceutical industry does. And the first thing that boards of directors want to know is: What’s going to be the market for this vaccine? The second problem is: How are we going to test this vaccine to see if it prevents disease? To do that you typically need ongoing transmission. … In many cases, these viruses—like Ebola and Zika—do tend to come and go.”

But Weaver is hopeful, in part because he expects the current pandemic to last for a while.

“We did get a vaccine for Ebola licensed at the end of last year because the system for the clinical trials improved to the point where we could get it done during the big West African outbreak,” he said. “Hopefully this will happen with the coronavirus—that the vaccine will be developed quickly enough that we can test it during the outbreak, when it’s much easier with many people exposed. We can vaccinate a small number of people and placebo vaccinate others and show a difference statistically. I think this time that there’s so much attention on this outbreak that the financial pieces also are going to be different. I think governments are going to be willing to pay the cost for this vaccine and pharmacy companies probably will, too, because this is a virus that I don’t think is going away after the peak of the outbreak. … I think we may get one of these early vaccines available in a year to a year and a half.”

In the United States, transmission of the virus is going to get worse before it gets better. Once you have community spread—when an infected person has no recent travel history or contact with another person known to be infected—you’re going to see pop-up cases, especially once you start to test more, Shah said.

Flattening the curve, he added, means working as a community to do all the things that will help individuals and systems socially distance: Don’t go to work when you’re sick. Don’t attend large gatherings.

“It might take longer to then clear the virus out of our population,” Shah said, “but at least the health care system doesn’t get overrun.”

Look to the outbreak in New Rochelle, New York, Weaver said, as an example of what not to do.

“A single infected individual started a chain in transmission that very quickly infected many dozens of people,” the virologist said. “We’re all part of the problem if we become infected and transmit disease. … One person who doesn’t pay attention can have a big impact on the community.”