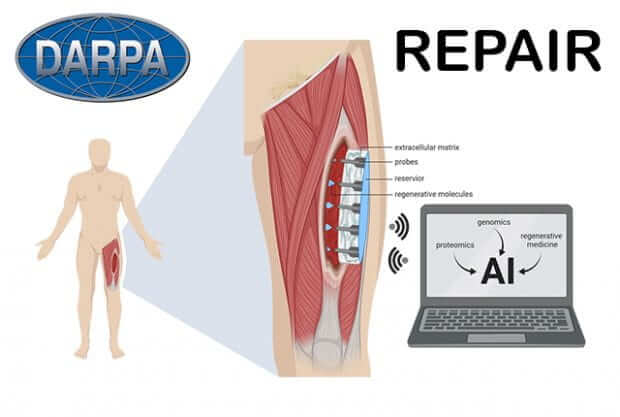 There are few treatment options when trauma destroys more than 20% of a muscle. Such large wounds, which are common in recent overseas conflicts, overwhelm the body’s natural capacity to regenerate muscle tissue. Instead, a stiff scar forms in place of the missing muscle, which often leads to significant disability.

“With these severe injuries it’s been drilled into us through all of our training that functional muscle replacement is not possible,” said grant principal investigator Dr. Stephen Badylak, a professor of surgery at the University of Pittsburgh School of Medicine and deputy director of Pitt’s McGowan Institute for Regenerative Medicine. “The sort of technology we’re developing offers hope where there otherwise would have been no hope.”

Badylak envisions creating a device that would change the environment inside larger wounds to help them heal the way smaller wounds do naturally.

Smaller, self-healing wounds typically switch from inflammatory to anti-inflammatory conditions a couple weeks after the initial injury. Badylak and colleagues imagine kicking larger wounds into anti-inflammatory mode as early as three or four days after an injury, and then again a few days later, repeating the cycle until the muscle rebuilds itself. He said this is similar to the way fetal wounds heal without forming a scar.

All of that would be accomplished by REPAIR, a smart device implanted inside the wound. REPAIR will monitor key molecular signals at each stage of healing — from the first hours after injury to the days and weeks that follow — and deliver specific molecules at specific times under the direction of artificial intelligence.

Rice co-PI Ashok Veeraraghavan will lead an effort to create imaging technologies to measure blood flow and vascularization, and Robinson’s team will help with the photonic integration of the imaging technology as well as develop “flexible photonic devices that will be integrated into the intelligent bandage to monitor temperature and biochemical factors in the wound bed.”

Veeraraghavan and Robinson are each associate professors in electrical and computer engineering, and they and Rice co-PI Omid Veiseh are members of Rice’s Neuroengineering Initiative.

Veiseh, a Cancer Prevention and Research Institute of Texas Scholar and assistant professor of bioengineering, said, “My team will be engineering cells as actuators for production of wound-healing factors with spatial and temporal control within the intelligent bandage.”

The first two years of the project will involve developing the device. The next two years will involve close collaboration with surgeons at Walter Reed, who treat patients with major muscle loss, to refine the design so it’s suitable for clinical use.

The researchers plan to work with industry partners and the Food and Drug Administration to identify and clear regulatory hurdles that might slow clinical translation. For instance, it is possible to test whether the components of the device are safe to use in the human body while the overall design is evolving.

“We’re developing the science and the device in mostly an academic setting,” Badylak said. “If that’s done without consideration of regulatory and industry requirements, patients would never see it because it would remain buried in institutions with no clear path for clinical translation.”

One of the companies engaging in this process is ECM Therapeutics, which Badylak spun out of Pitt in 2018 to speed the clinical translation of several extracellular matrix technologies developed by his lab. Badylak and Pitt both have a financial stake in the company.

The REPAIR project is funded through DARPA’s Bioelectronics for Tissue Regeneration program.

Additional investigators on the grant include Yoram Vodovotz, Ruben Zamora, Douglas Weber, Bryan Brown, Paul Cohen and Milos Hauskrecht, all of Pitt; Tzahi Cohen-Karni and Adam Feinberg of Carnegie Mellon; Jonathan Rivnay of Northwestern; Gary An and Robert Chase Cockrell of the University of Vermont; Peng Jiang of the University of Wisconsin; and Eric Elster and Seth Schobel of Walter Reed.

https://news-network.rice.edu/news/files/2020/03/0311_REPAIR-b-extOrg.jpg
CAPTION: Rice neuroengineers and bioengineers are part of a national team that’s developing REPAIR, an electronic patch that will help trauma patients regrow muscle tissue. REPAIR will monitor key molecular signals at each stage of healing — from the first hours after injury to the days and weeks that follow — and deliver specific molecules at specific times under the direction of artificial intelligence. (Image courtesy of the University of Pittsburgh School of Medicine)

This release can be found online at news.rice.edu.

Located on a 300-acre forested campus in Houston, Rice University is consistently ranked among the nation’s top 20 universities by U.S. News & World Report. Rice has highly respected schools of Architecture, Business, Continuing Studies, Engineering, Humanities, Music, Natural Sciences and Social Sciences and is home to the Baker Institute for Public Policy. With 3,962 undergraduates and 3,027 graduate students, Rice’s undergraduate student-to-faculty ratio is just under 6-to-1. Its residential college system builds close-knit communities and lifelong friendships, just one reason why Rice is ranked No. 1 for lots of race/class interaction and No. 4 for quality of life by the Princeton Review. Rice is also rated as a best value among private universities by Kiplinger’s Personal Finance.