Matt Kintzele, diagnosed five years ago, is training for triathlons 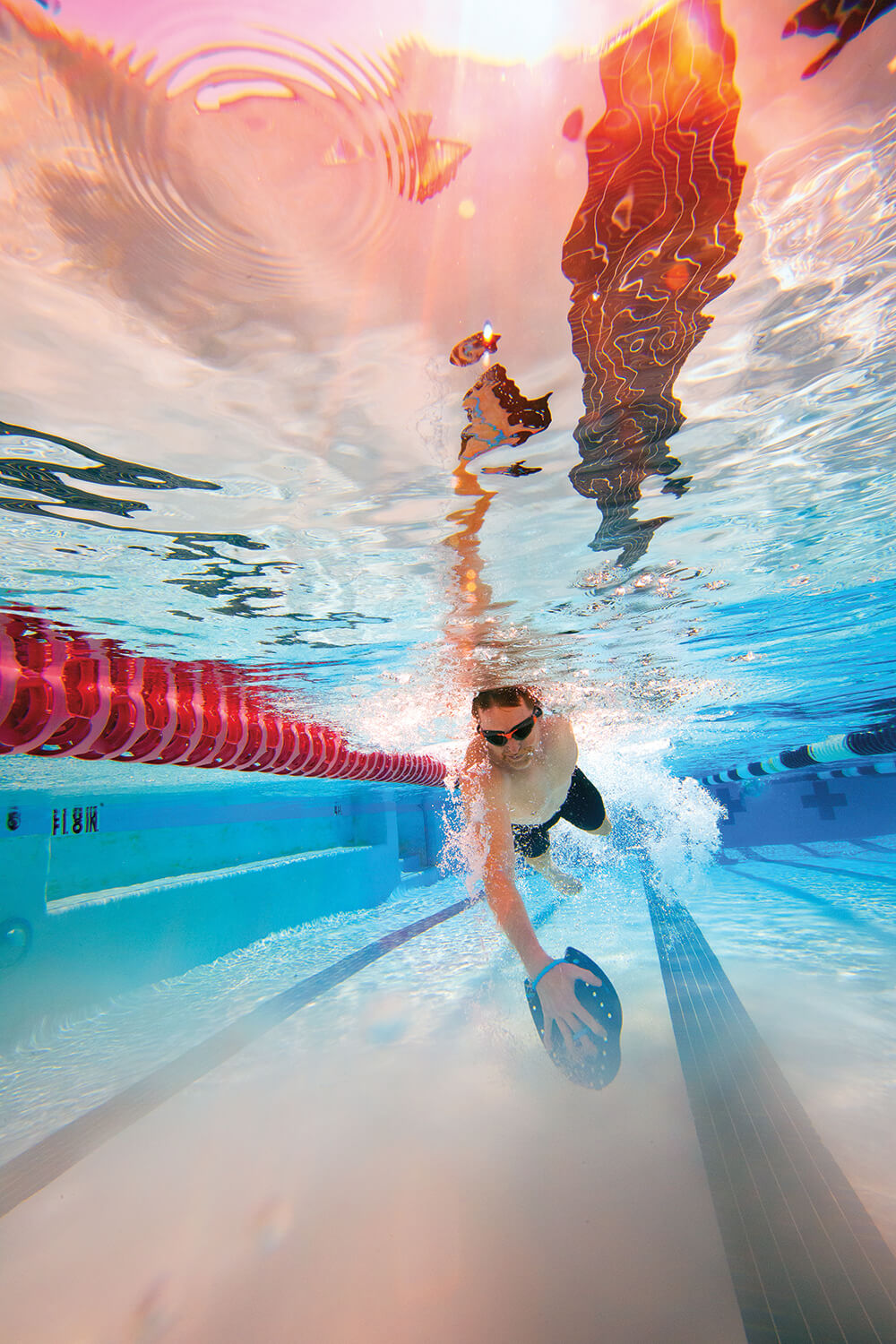 Matt Kintzele could feel that the air had chilled overnight, but he got up anyway. He pulled on his clothes, ate a quick breakfast, then drove to the local YMCA in Katy, a large suburb on the westward end of Houston’s sprawl. He was tired, but he had laps to swim. By the time he entered the pool, his hands were shaking uncontrollably. But that wasn’t going to stop him—nothing, he told himself, would.

Five years ago, the 51-year-old was diagnosed with early-onset Parkinson’s disease, a progressive disorder of the central nervous system caused by a loss of dopamine in the brain. The condition affects movement and often leads to tremors and rigidity in the muscles. Kintzele had first noticed a tremor in his left thumb, which eventually progressed to his entire hand. After seeking answers from a host of doctors and specialists, he visited Baylor College of Medicine for a second opinion. There, he met with Joseph Jankovic, M.D., director of the Parkinson’s Disease Center and Movement Disorders Clinic.

“One of the things Dr. Jankovic said when I got my diagnosis was how important exercise is,” Kintzele said. “I took that very seriously. I wasn’t working out that much at the time, but I started working out basically every other day, three to four times a week, to try to battle it.”

Jankovic gives the same advice to all his patients, calling on dozens of studies concluding that aerobic exercise has a direct influence on brain function and can even slow the progression of neurodegenerative diseases like Parkinson’s.

“There have been many, many studies that show that patients with Parkinson’s disease who exercise do much better in the long run than those who don’t exercise,” Jankovic said.

“Animals who exercise have much higher production of these neurotrophic factors,” Jankovic said. “There’s also evidence that animals that exercise actually have increased brain volume, and there have been studies in humans that showed that long-term exercise can result in greater volume of the cerebral cortex and the hippocampus. People who exercise also have increased connectivity within the brain and they have less age-related degeneration of the brain. All of these factors support a notion that the brain benefits from long-term exercise, and this has been specifically shown in patients with Parkinson’s disease.” 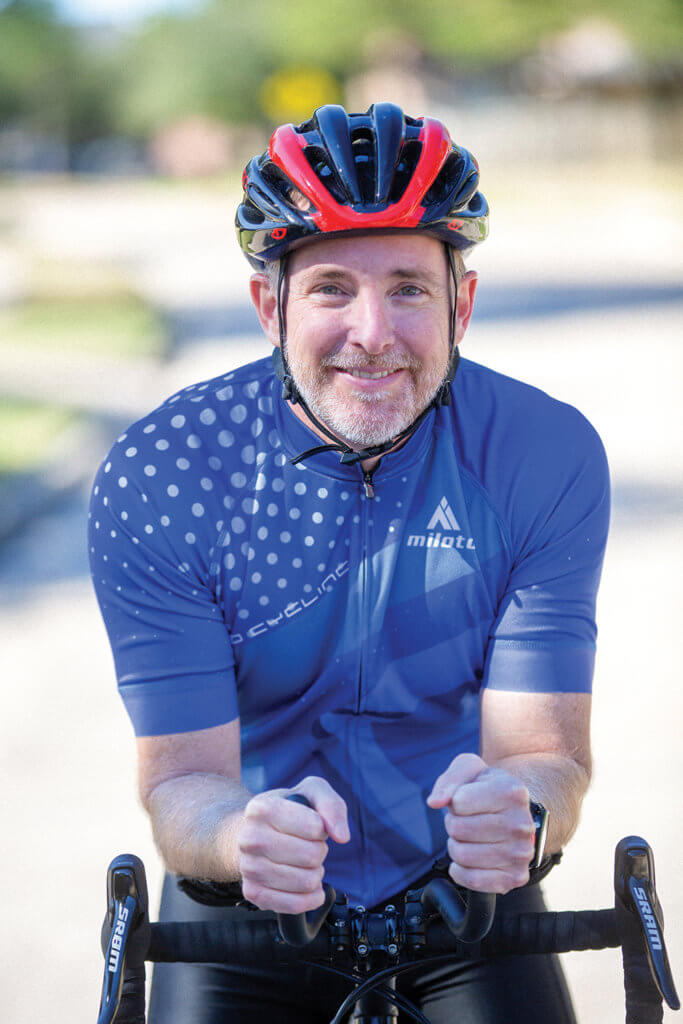 Matt Kintzele cycles regularly as he trains for an upcoming IRONMAN triathlon.

Jankovic had no problem convincing Kintzele of the benefits of exercise, but, for Kintzele, acting on the doctor’s advice would prove easier said than done.

“That first year when I was diagnosed, I wasn’t taking any meds for [Parkinson’s] yet. And over the course of about six months, I began to not be able to walk fast,” Kintzele said. “In my left leg, when I tried to run, my toes wouldn’t push off. I just couldn’t do it, and so I walked, but then I became unable to walk really fast. That was frustrating because I was a runner earlier in life.”

He shifted to weight-lifting, boxing and some cycling, but was eventually advised to take medication to help control his symptoms. The medication worked wonders.

“I suddenly didn’t have problems writing, and suddenly my leg was working so I could run again,” Kintzele said.

Everything went smoothly for about a year, until he was told he needed to increase his dosage. That led to a common side-effect: dyskinesia, an involuntary movement of his muscles that Kintzele described as more circular—different from the tremors to which he had grown accustomed. Kintzele was prescribed different medication to address those side effects, but three days later, he developed a serious allergic reaction.

He called his doctors, assuming there would be an alternative prescription, but, none existed. He had to rely solely on Jankovic’s original advice.

“I did a lot of praying, I did a lot of thinking, a lot of reading, and I said, ‘You know what, I’m going to exercise every day, because if every other day was good, every day has got to be better,’” Kintzele said. “For that first year after, I probably missed three days, total.”

Not only has aerobic exercise been shown to slow the progression of Parkinson’s disease, Jankovic said, but it also helps manage common symptoms experienced as a result of Parkinson’s medication. Kintzele’s symptoms—those involuntary, circular movements—all but disappeared after he started his daily regimen. And something unexpected happened, too: he regained much of the energy his Parkinson’s had zapped.

“It’s amazing. I was struggling when I was first diagnosed because I was so tired,” Kintzele said. “But now I have energy. I still work. I’m an engineer and, at times, I’ve worked 10-, 12-, 14-hour days, and I don’t have a problem with it. I couldn’t have done that before.”

“Exercise improves flexibility of the muscles and it improves rigidity issues, which is one of the cardinal symptoms of Parkinson’s disease, so patients who have stiffness of muscles and joints, when they exercise, that improves, too,” the doctor said.

Empowered by his daily routine, Kintzele began setting goals. First, he trained for a half-marathon, overcoming setbacks and injuries to complete one in San Antonio under his goal of two hours.

“I ended that race at 1 hour, 53 minutes. I was so fast getting to the line that my wife wasn’t ready to take pictures of me,” Kintzele said.

Since then, he’s tried to run at least one half-marathon every year and has pushed himself toward an even more daunting goal: an IRONMAN triathlon, which includes a 2.4-mile swim, a 112-mile bicycle ride and a 26.2-mile marathon run. It’s something he’s wanted to do since he was kid.

But then, another setback. During a long training run, Kintzele pulled his hamstring. Exercising with Parkinson’s can be a double-edged sword, since the condition can also make people more susceptible to injuries. Ultimately, Kintzele was diagnosed with proximal hamstring tendinopathy and referred to Memorial Hermann IRONMAN Sports Medicine Institute, where he began working with physical therapist Taylor Cole. 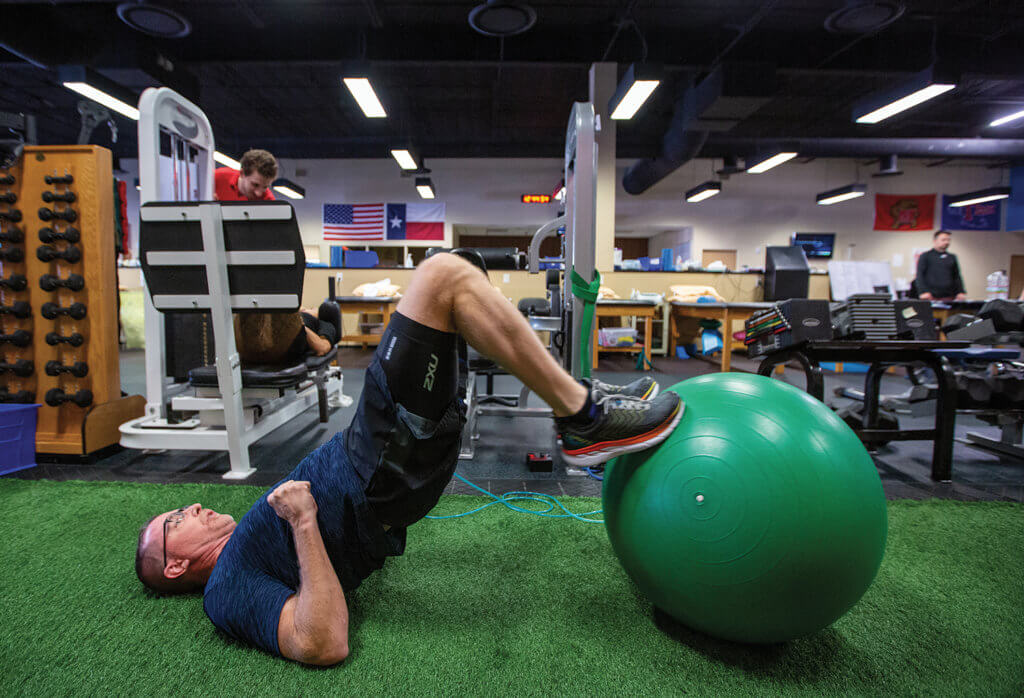 Matt Kintzele works out at the Memorial Hermann IRONMAN Sports Medicine Institute, where he underwent physical therapy for a hamstring injury.

“Tendinopathy is when there is a non-normal healing response of the tendon—where it tries to heal itself but it can’t,” Cole explained. “That’s why Matt couldn’t run anymore.”

Kintzele’s therapy was a balancing act, Cole explained. In order to get better, the tendon had to get stronger, but he couldn’t experience too much pain because that would mean prolonging the injury. For months she worked with him, slowly increasing weight. Now, Kintzele is almost 100 percent back to his training.

“I feel so much stronger now, and the pain has gone away,” Kintzele said. “Hamstring tendinopathy, in many cases, is a career-ender for runners. But I was like, ‘I need this. I need this.’”

Although Kintzele had originally set his sights on an IRONMAN in Hawaii, he’s had to push back his goal due to his injury. Now, he’s training for the half-IRONMAN in October, held in Waco, Texas. He believes his work with Cole at Memorial Hermann has set him up for success so he’s less likely to get injured in the future, and although he knows his Parkinson’s disease won’t disappear, he remains focused and determined.

“It’s a progressive disease, so it will progress—you’re not going to stop it—but it’s nice to be able to battle it, and it’s maybe the only way I can battle it,” said Kintzele, who credits his wife, Kelly, with keeping him grounded and motivated. “I think about it like this: I wasn’t a triathlete that got Parkinson’s. I was an everyday guy that got Parkinson’s that decided to become a triathlete to help do this battle every day.”