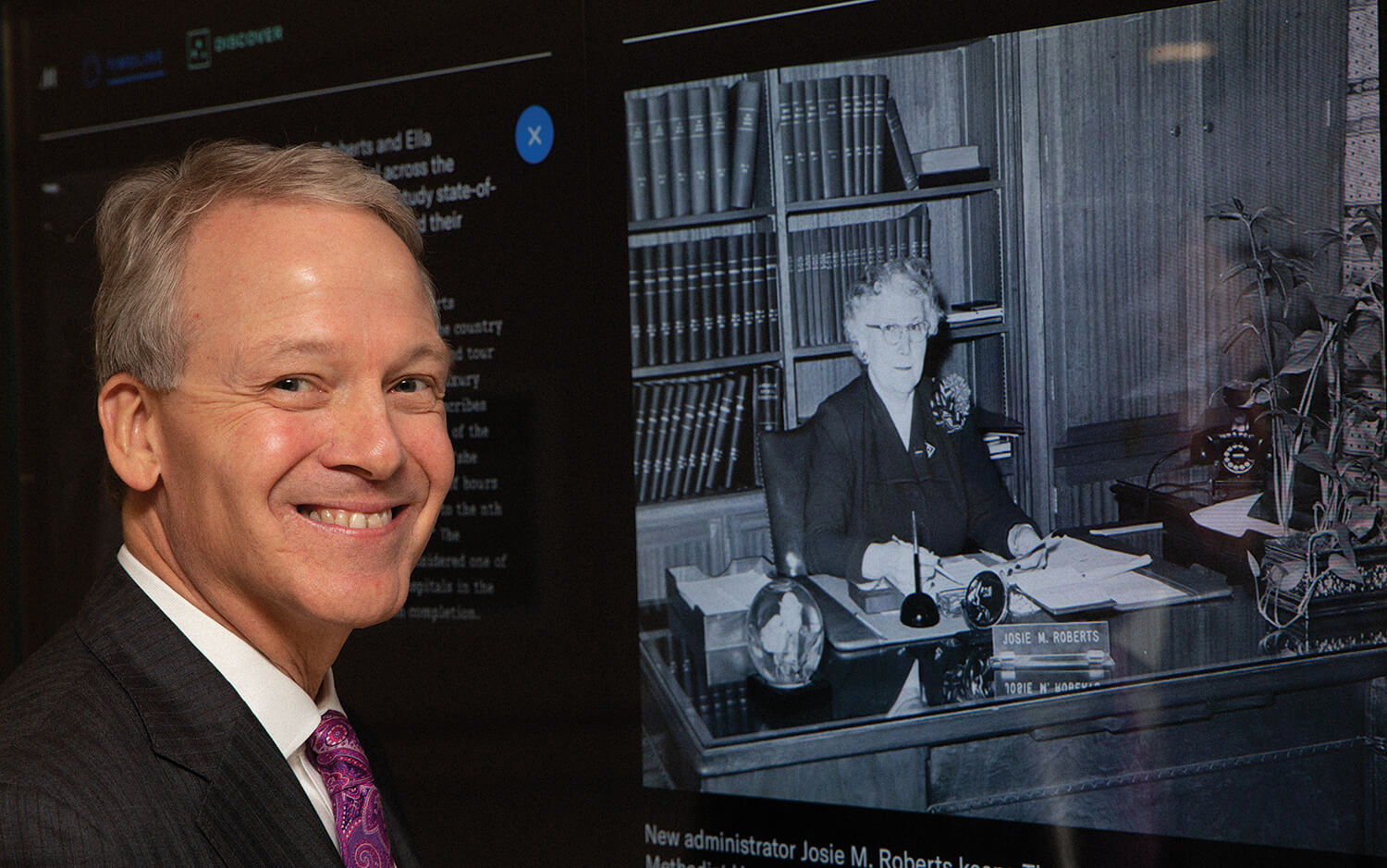 Nearly a century ago, Josie Roberts rose from the clerical ranks of Methodist Hospital to become the institution’s fearless leader, saving it from closure at the height of the Great Depression.

It was an era in which few women ran businesses.

“I never had the benefit of knowing [Roberts], but I think she had great resiliency and fortitude,” said Marc Boom, M.D., president and CEO of Houston Methodist Hospital, who presided over the opening of an administration building named in Roberts’ honor in February. “Without her … there would be no Houston Methodist. This is 1932 and this is a woman we are talking about and, back then, that was not the norm. She functioned in a man’s world and succeeded.”

Born to a Methodist minister in 1892, Roberts, the eldest of 10 children, was raised in Grimes County, Texas, near College Station. She married at 17 and was widowed at 25 when her husband died from tuberculosis. Left with a young daughter, Roberts went to work to support her family. After being employed at a telephone company, she took a job as an assistant bookkeeper to Sam Hay Jr., the administrator of Methodist Hospital.

Roberts joined Methodist just as it was expanding from the original 30 beds at Norsworthy Hospital— which the Methodist church had acquired at the end of 1919—to an adjacent wing that included 72 additional beds.

“The hospital was in dire straits when Josie came along in 1924,” said Bryant Boutwell, DrPH, a Texas Medical Center historian. “They were a great hospital, had great physicians and were respected for the care they gave and they even had a nursing school, but the finances were terrible. … They were just not making ends meet.”

With no formal education beyond high school, Roberts relied on her can-do attitude, wit and natural aptitude for business. Known for her squeaky voice and thick Southeastern Texas accent, she wasn’t afraid to go toe-to-toe with male colleagues, board members, patrons and religious leaders.

“The first administrator was the son of the Methodist bishop at the time and he always said his greatest accomplishment was hiring Josie Roberts,” Boom said. “He left because every time a patient died, it was too tough for him. After that, a Methodist minister came along to be the second administrator and [Roberts] was his chief clerk—kind of second in command, an expanded secretarial role, almost, but she did a lot of the nuts and bolts of management.”

Around 1930, a letter from independent auditors said that Roberts really knew what she was doing and recommended the hospital give her more authority.

“By then, we’re already in the midst of the Great Depression. In the latter part of 1931, all of the banks in Houston were on the verge of closing and Jesse Jones [famed Houston politician and entrepreneur, who served as U.S. Secretary of Commerce from 1940 to 1945] brought them all together to do what they needed to do to stay afloat,” Boom said. “Towards the end of 1931, the hospital is broke. … It had been losing money throughout its history and was essentially making do on donations. … In 1931, the minister decides the hospital is going to fail and he leaves.”

Left without a leader, the hospital teetered on the verge of collapse. On Jan. 1, 1932, the board named Roberts the superintendent of Methodist Hospital.

“I give the board the credit for doing that, but … she was basically running the hospital behind the scenes anyway,” Boom said. “ The board was smart enough to give her a shot. … Once she got the shot, boy she ran with it and she led the hospital for 22 years.”

In 1932, many women working outside the home in the United States were employed as teachers, seamstresses, domestic servants, and clerical and factory workers, according to the Women’s Bureau of the U.S. Department of Labor.

“It was very unusual to put a woman in charge of a hospital in those days,” said Boutwell, a former professor of Oslerian medicine and faculty member of the McGovern Center at the University of Texas Health Science Center at Houston. “Men were in medicine and ran hospitals for the most part. The only major roles for women might have been to run a nursing school. To elevate [Roberts] to superintendent of Methodist Hospital was quite a statement—maybe a statement of confidence and trust in her and maybe a statement of the Methodist Church in women who could get jobs done.”

Roberts had two choices: Shut the hospital down or make the tough decisions required to keep the hospital open and serve the city of Houston during the Great Depression.

“They tell stories of how the hospital had a $7,000 laundry bill and she basically said, ‘You’re over-charging me. I’m going to put this out to bid,’ and indeed she did. … She ended up driving down the price of laundry and she did those things throughout the institution,” Boom said. “She had to slash salaries a little bit and she made sure that money that was owed to them was collected. She did things that other people didn’t necessarily want to do. … Her predecessor didn’t want to ask patients for payments because they were Methodist and he didn’t want to offend them, but she wasn’t afraid to do that.”

Yet Roberts knew no expense should be spared when it came to keeping talent. When a disillusioned Michael E. DeBakey, M.D., was looking for a new place to train Baylor College of Medicine students, Roberts, knowing there was no money in the budget, offered to install air conditioning in the operating room if he would come to work at Methodist Hospital.

“She always said to find people who are passionate about what they do, give them some tools to succeed, give them some goals and get out of their way and let them do great things. That is one of the many things I have learned from her,” Boom said.

World War II pulled the country out of the Great Depression and Roberts helped Methodist Hospital survive it. When she learned of a bold new local project—a plan to gather medical education and patient care into one physical location called the Texas Medical Center—Roberts saw the future for Methodist Hospital.

Roberts had already formed a close partnership with Ella Fondren, who took her husband’s seat on Methodist’s board in 1939. (Walter Fondren, Sr. co-founded what is now ExxonMobil). The two women ensured Methodist Hospital would have seven acres of land in the heart of the Texas Medical Center on which to build a 300-bed, state-of- the-art hospital.

“Josie Roberts and Ella Fondren had a vision for what they wanted the hospital to be,” Boutwell said. “They didn’t just care about size. They wanted it to be the best hospital around. They hit the road and toured the best hospitals in the country and they worked those elements into the design.”

Boom recited an anecdote that Roberts liked to repeat.

“She told this story of how a man told her, ‘Little lady, I don’t think you know how much seven acres is,’ and she said, ‘I just told Mr. so-and-so that I most certainly understand what seven acres is,’” Boom said. “She is largely responsible for getting us the footprint we have today and it has served us very well. Now we have a 22-story building and 950 beds, so she was tremendously impactful.”

Roberts resigned from Methodist Hospital on Feb. 1, 1953—29 years to the day she started as superintendent, but her legacy lives on.

Today, 70 percent of Houston Methodist Hospital system employees are female, Boom said, and more than half the employees in management are female. Roberts led the way, and now a new Methodist building memorializes her contribution.

“The Josie Roberts Administration Building … is a great way to recognize her,” Boom said. “Every single new employee will go to that site for orientation, where they will learn about our faith-based system, our values and history.”