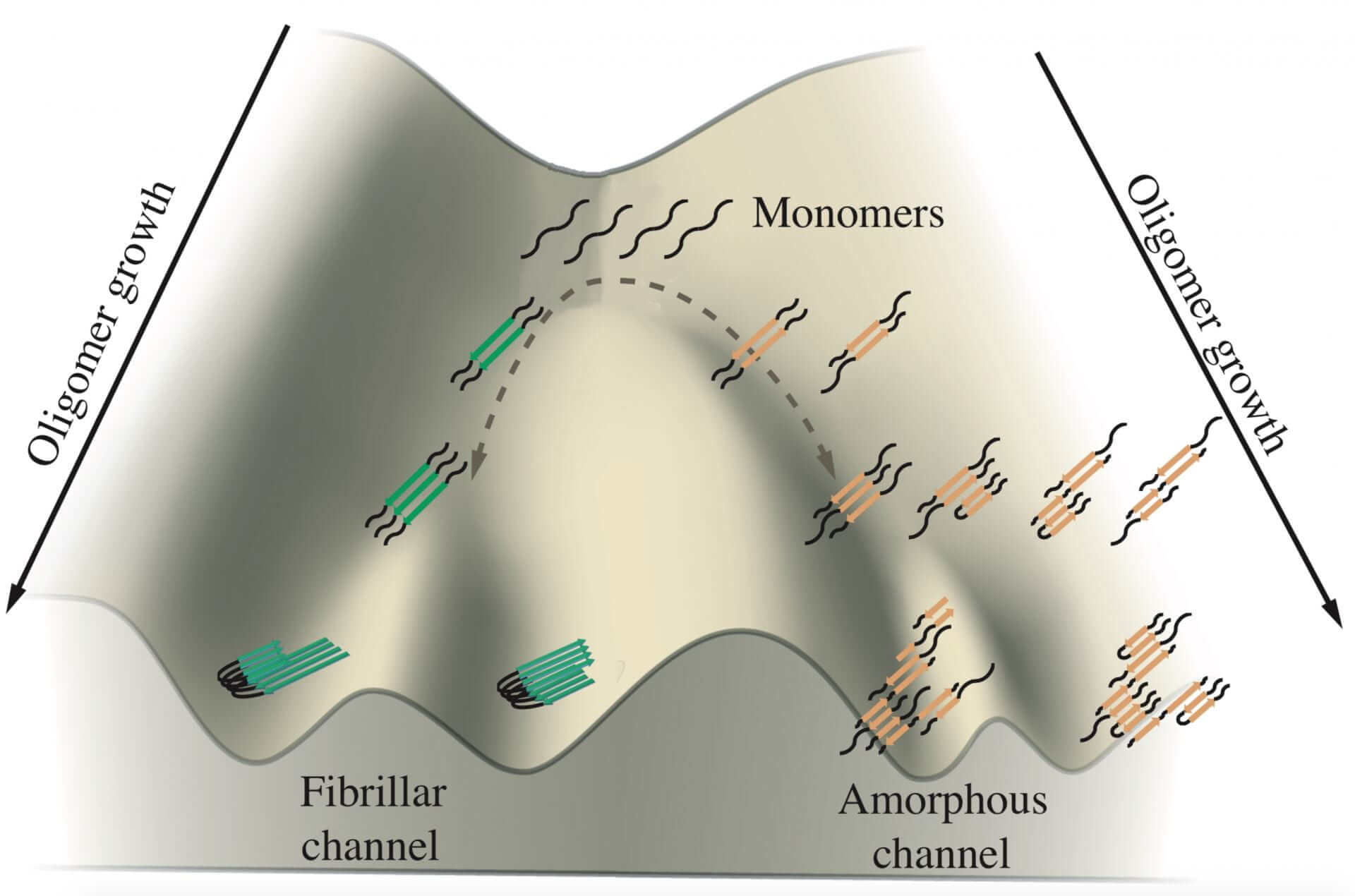 HOUSTON – (Feb. 3, 2020) – New simulations by Rice University scientists tell a tale of two taus and how they relate to neurological disease.
Their work suggests tau proteins take either of two paths to form aggregates suspected of promoting, and perhaps causing, Alzheimer’s and Pick’s (aka frontotemporal dementia) diseases. Precisely why remains a mystery, but figuring it out offers the possibility of controlling their fates.

Tau proteins, particularly in neurons, primarily regulate microtubules, the filaments that serve as roadways for cargo inside a cell and facilitate division. But they come in many forms and, as it turns out, these can aggregate in distinct ways.

The study by biophysicist Peter Wolynes and his team in the Proceedings of the National Academy of Sciences is the first computational analysis to draw a distinction between proteins that form either the solid fibrils found in the brains of patients with Alzheimer’s and Pick’s or disordered, tumbleweed-like clumps that float in the neurons’ cytoplasm.

“There’s a relationship between the form that turns into membraneless organelles (the tumbleweeds) and the form that becomes fibers,” said Wolynes, a co-director of Rice’s Center for Theoretical Biological Physics. “There seems to be two distinct pathways that the same tau molecule can follow, and the balance between the two pathways is affected by some biological process.”

He said the models suggest that phosphorylation, which regulates many cellular signaling processes, may be the determining factor.

“Once we figure out which of these aggregates is the actual bad guy, then it should be possible to intervene in, say, the phosphorylation process itself in order to change the balance,” Wolynes said.

The Rice lab used its coarse-grained AWSEM (associative memory, water-mediated, structure and energy model) analysis tool, which predicts how proteins fold, on a variety of tau protein models based on variants from patients. They found that the formation of fibers can be manipulated by phosphorylation which occurs at a multitude of sites in the tau protein.

Phosphorylation can also go off the rails, he said. “There are something like 20 sites along the tau protein that can be phosphorylated, but in general, only four or five of them are,” Wolynes said. “But sometimes, they’ve become hyperphosphorylated, which means the enzymes responsible for the process do more. They end up with, say, 10 sites phosphorylated instead of five, and that may have some effect.

“If the extra phosphorylation can cause more of the disease, we would want to find out which kinases do the phosphorylation and try to inhibit them with a drug, like we do in treatment for cancer,” he said.

Tau proteins exhibited another interesting characteristic called backtracking, which the researchers saw in amyloid beta peptides that are also implicated in Alzheimer’s. Both tend to aggregate until energetic barriers force them to partially unfold and then seek another path to their final, most stable forms.

It’s at that point of frustration that aggregating taus appear to branch into different directions, Wolynes said. One set of tau forms parallel fibrils that aggregate into the ordered plaques observed in patients’ brains, while the other loosely aggregates into the floating clump. The researchers suggested the backtracking mechanism may be a universal feature in protein aggregation, a topic for future study.

The loose aggregates present their own challenges to scientists, Wolynes said.

“They’re a physics question in the following sense: They’re localized objects, but why don’t they all just glom together and form one huge organelle, like what happens with drops of oil in water?” he said. “Is it just that it takes too long for them to move around? Is it that they’re constantly being made and disassembled? And what determines their size?

“At this point, it’s still a very basic and fairly simple story,” Wolynes said. “The actual story of tau is still too complicated for us, but what we have learned so far is fairly straightforward.”

Rice graduate students Xun Chen and Mingchen Chen are co-lead authors of the paper. Former postdoctoral researcher Nicholas Schafer is co-author. Wolynes is the D.R. Bullard-Welch Foundation Professor of Science, a professor of chemistry, of biosciences, of physics and astronomy and of materials science and nanoengineering at Rice.

The National Institute of General Medical Sciences, the National Science Foundation (NSF) and the D.R. Bullard-Welch Chair at Rice supported the research. Computational resources were provided by the NSF-supported DAVinCI cluster at Rice, administered by the Center for Research Computing and procured in partnership with Rice’s Ken Kennedy Institute for Information Technology.