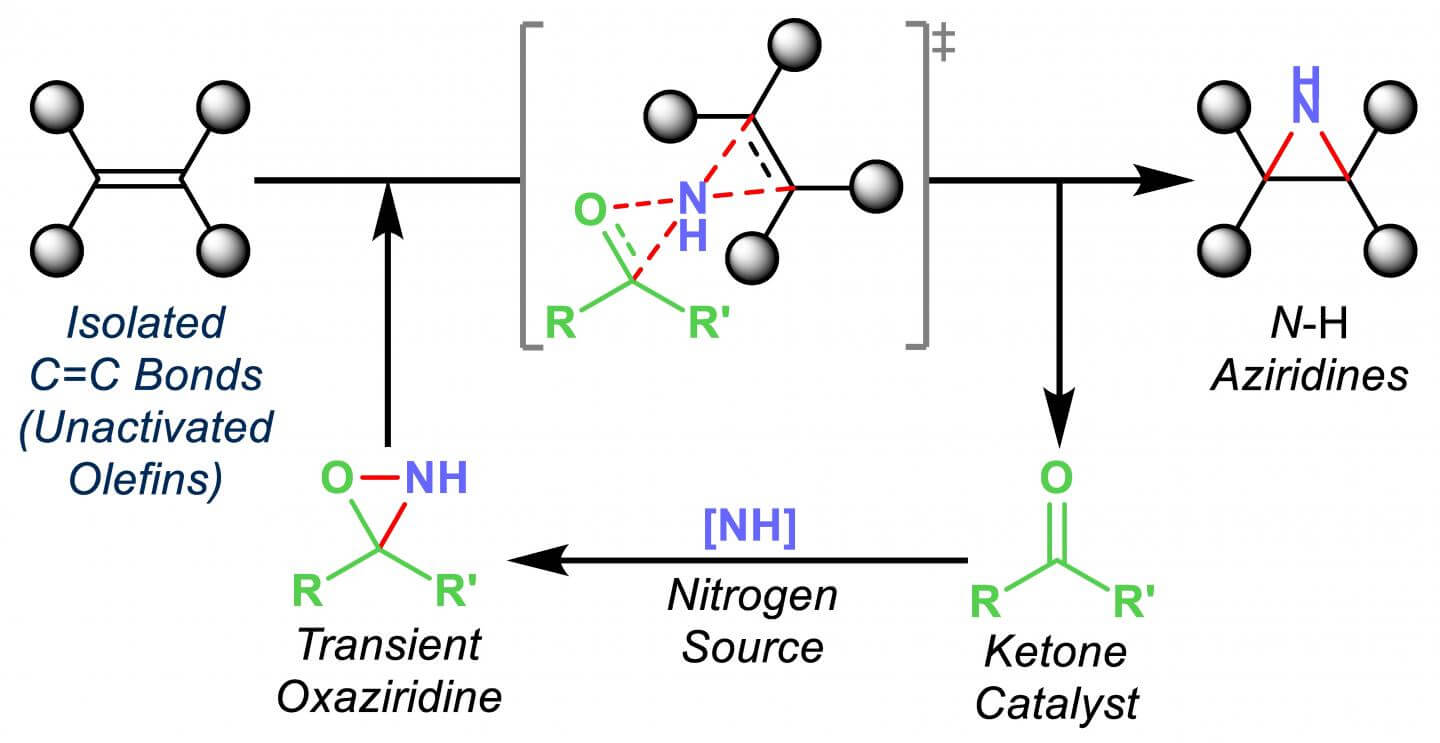 HOUSTON – (Feb. 24, 2020) – In one pot, at room temperature, chemists at Rice University are able to make valuable pharmaceutical precursors they say could change the industry.

Exposed nitrogen atoms are critical to drug discovery. The Rice process combines nitrogen and hydrogen atoms in triangular aziridine products that are readily available to react with other agents.

Most important, Kürti said, is that his lab’s organocatalytic aziridination process transfers nitrogen to olefins that haven’t already been modified, or functionalized.

“These unactivated olefins are commodity chemicals, but very difficult to functionalize,” he said. “We are able to do that now with this chemistry under operationally simple and mild conditions.”

Turning them into nitrogen-containing small molecules makes them far more useful, he said. “You can then convert them to more complex molecules,” he said. “These N-H aziridines are essential building blocks.”

The lab detailed its new aziridination technique in Nature Catalysis.

“The direct amination of enol ethers was a nice breakthrough because we didn’t need any catalyst,” he said. “The solvent was promoting the actual nitrogen-transfer process. Then we asked if we could replace the currently used precious metal catalysts with a small organic molecule at just a fraction of the cost to make aziridines.”

The new study provides a definitive yes. “This has been a dream of ours for a long time,” Kürti said.

Kürti and postdoctoral associate and co-author Zhe Zhou estimated the commercially available organic small molecule catalyst needed for the process is about 4,000 times less expensive than the rhodium-based catalysts in common use. They also make the process more sustainable.

“Everybody thinks catalysis is the answer for our problems, and in many cases it’s true,” Kürti said. “In a difficult reaction, a small amount of catalyst will accelerate the process and save time and money.

“But many people forget the cost of the catalyst, and whether it’s sustainable,” he said. “Unfortunately, it’s become pretty clear that we’re using high-value catalysts that contain precious metals. The world supply is limited, and the prices of these metals are at best erratic.”

“You definitely give up a little bit there,” he said. “But six hours is tolerable if you’re making big batches. That’s what I hope people will recognize in the long run.”

Kürti hopes to refine the process to control how the nitrogen attaches to the olefin and then, in turn, control the essential chirality, or handedness, of the product. The chirality of a drug is critical to how well it works, if at all.

Until then, the current process could be of great interest to industry, he said.

“Easier access to previously difficult-to-obtain precursors can actually influence the compound structures that chemists will make in the in the lab,” Kürti said. “Simple procedures that are straightforward to use tend to dominate in pharmaceutical drug development.”