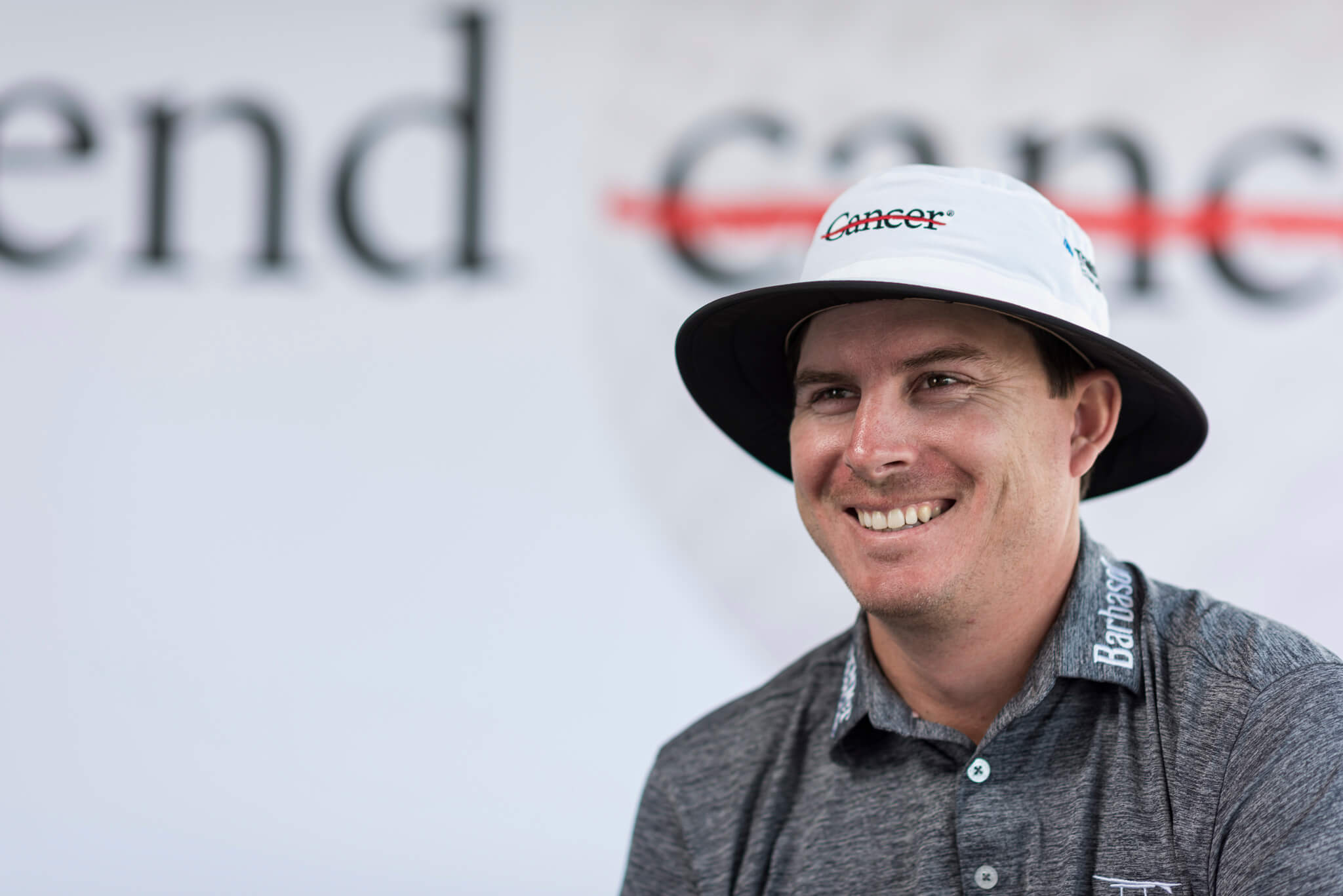 Joel Dahmen, currently one of the top 100 golfers in the world, is rarely seen without his iconic bucket hat.

The sartorial choice was initially out of practicality, but evolved into a symbol of Dahmen’s fight against cancer.

The full brim kept the brutal golf course sun off his neck. He felt better and had more energy while he played in the shade the hat provided, he said, but he was shy about wearing the hat on tour at first.

“At the time, I didn’t have a house sponsor on tours, so I could wear whatever I wanted,” Dahmen said. “But you don’t want to get laughed at. It’s different and no one’s different on tour.”

Dahmen finally embraced the bucket hat and wore it on tour. Since then, his distinctively brimmed headpiece has become widely recognized on the golf course. The 32-year-old was tapped in 2019 by The University of MD Anderson Cancer Center to serve as the hospital’s official PGA Tour ambassador.

“I finally got over that stigma and wore it over the summer. I ended up playing with Tiger Woods, went around with a bucket hat and that kind of blew up from there and it kind of became my thing,” Dahmen said. “Then, partnering with MD Anderson, it has completely taken off in ways I would have never imagined.”

As the official cancer center of the PGA Tour, MD Anderson provides tournament guests with sun protection products such as UV-protectant sunglasses, sunscreen and lip balm to spread the word about sun safety to prevent melanoma, a type of skin cancer. The American Cancer Society estimates approximately 100,350 new melanoma cases and about 6,850 deaths in 2020.

With proper precautions, people can reduce their risk of developing melanoma.

“Be proactive about your skin and take the time to look at it,” said Susan Chon, M.D., a professor of dermatology at MD Anderson. “People tend to take things for granted. It’s important to just be more cognizant of your skin and get to know it, so when you do look at it two months later for five minutes, you might be able to see some changes.”

Inspired by his personal battles with cancer, Dahmen now proudly dons his bucket hats with the MD Anderson logo across the front as part of the hospital’s mission.

He was a high school junior in October 2004 when his mother, Jolyn Dahmen, was diagnosed with pancreatic cancer. She died in April 2005.

“It was honestly a challenging time,” the golfer said. “You just don’t think it would ever happen to you or if you hear cancer, you’re like, oh, just go take some meds and it’ll be fixed. Then unfortunately that wasn’t the case.”

Losing his mother shook him.

“I was a mama’s boy and definitely had some growing up to do after she had passed,” he said. “I was almost in denial of the whole thing. … For the first time in my life, I had my own adversity and just had some growing up to do and figure out what I actually wanted to do with my life. I had this great talent in golf and I’ve always been pretty well-liked, so for me it was getting back on track and not wasting the potential opportunities I had in front of me.”

Dahmen enrolled at the University of Washington in 2010, but dropped out of college to pursue a career as a professional golfer—playing on the PGA Tour Canada during the summer while residing in Tempe, Arizona.

Dahmen was living his dream playing tournaments in the Grand Canyon State. Then, in February 2011, Joel he felt an unusual lump on his groin.

“I knew right away what it was,” he recalled. “It was cancer.”

Dahmen, then 22, ignored the symptom—hoping the lump would go away on its own—but the tumor grew bigger and bigger. Two weeks later, he met with his brother, who was successfully treated for testicular cancer in 2009, for drinks and broached the subject.

“He said, ‘That’s exactly what I had. You need to go to the doctor,’” Dahmen said. “I walked into the doctor’s office the next day.”

He had the tumor removed a few days later, but the growth returned more aggressively with the potential for spreading.

His doctors decided to begin chemotherapy.

“I wasn’t ready for that,” Dahmen said. “I guess chemo truly meant that I was sick and I truly had to face it. I cried for a couple of days thinking, ‘Oh my goodness, I’m actually really sick. What is going on here?’”

Six days a week for three weeks, Dahmen received treatment in a room surrounded by fellow cancer patients. He made a full recovery and returned to golf for the Mackenzie Tour-PGA Tour Canada, but the image of his comrades in cancer remained etched in his mind.

“It was hard for me going through that at the time, but also because I’m in there knowing I’m going to be healthy and get out of there fine,” he said. “Then you see people around the room who probably aren’t going to make it. You see older people. You see young people. You see moms and dads. I almost felt guilty knowing that I was going to be out of there in a couple of weeks and continue to a normal life down the road.”

Dahmen’s cancer confrontations, both his own and his mother’s, give his golf game a new perspective and a new purpose: to be a beacon of hope.

“I have seen life and death, and golf is not it—as much as we can portray it that way at times,” Dahmen said. “There’s more to life than just playing golf on tour. … For me to be able to be bigger than the game of golf, I’m playing for more than myself and selfish reasons. I can show these people that you can survive cancer and go on to do great things and be healthy and give them hope.”

The consequences of socially isolating seniors