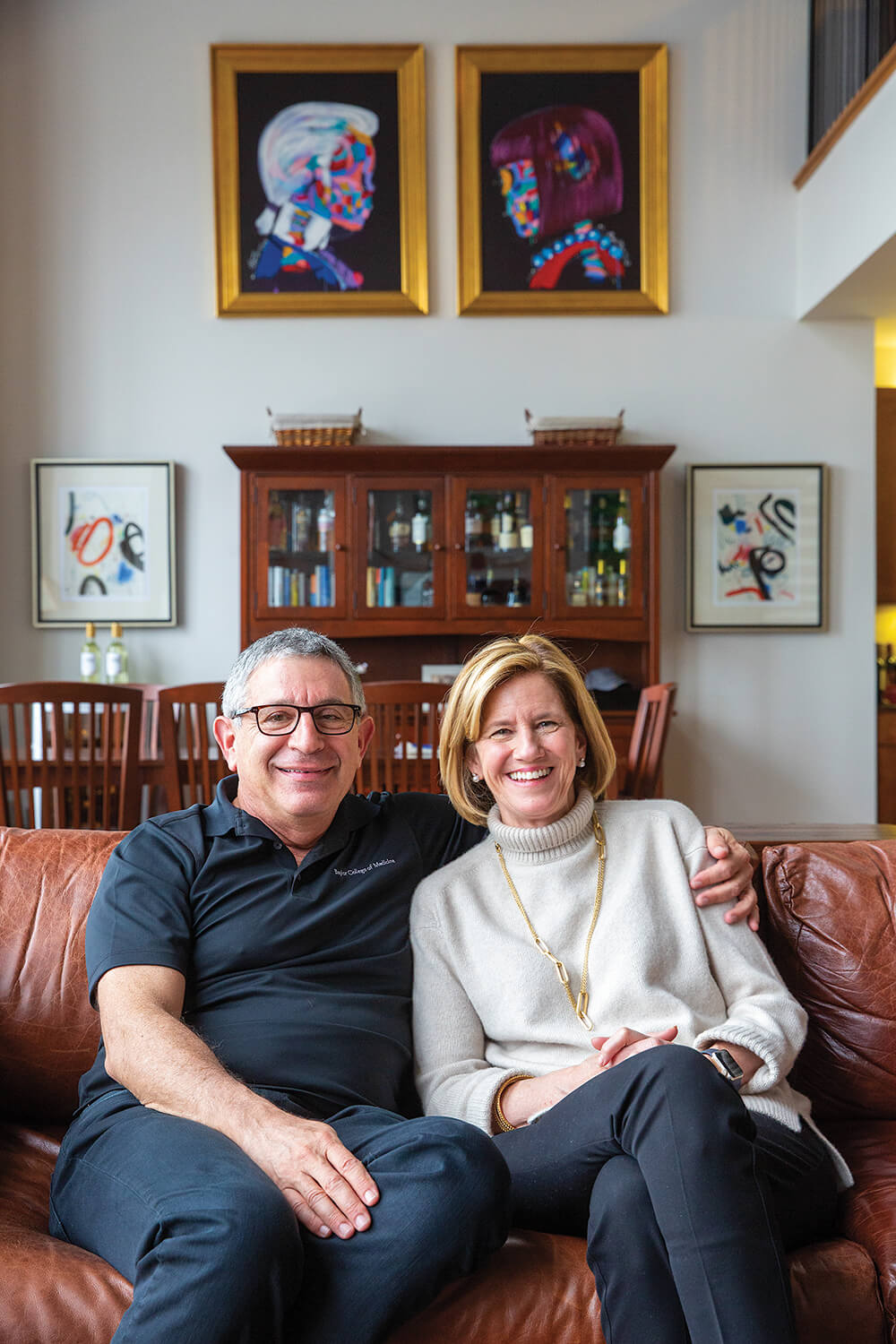 In a storyline that seems pulled from the TV script of a Shonda Rhimes medical drama, two budding young doctors fell in love and, over time, became deans of two top medical schools. As far as they know, Paul Klotman, M.D., president and executive dean of Baylor College of Medicine, and Mary Klotman, M.D., dean and vice chancellor of Duke University School of Medicine, are the only married couple in the United States to run two separate medical schools. The Klotmans have not only chosen to share their lives, but have been collaborating as scientists for 25 years, as well.

They met in Durham, North Carolina, at Duke University School of Medicine.

“We met during training in internal medicine,” said Mary, who was seated on a leather sofa in the couple’s Museum District-area condominium in Houston on a recent Saturday. “Paul was my chief resident and I was an intern. … We fell madly in love and got engaged within four months and married within the year.”

“Mary is Catholic and I’m Jewish. The rabbis wouldn’t do it, the priests wouldn’t do it, so we were married by a female Unitarian minister in a non-denominational chapel,” said Paul, who was seated on the sofa next to his wife. “There was this Jewish guy who converted to being Catholic, so we got him to come to give the blessing. All of the Catholics, of course, recognized his Jesuit robes and said, ‘It’s so wonderful having a priest here.’ All of the Jews go by and say, ‘It’s so wonderful having a Rabbi here. ’” 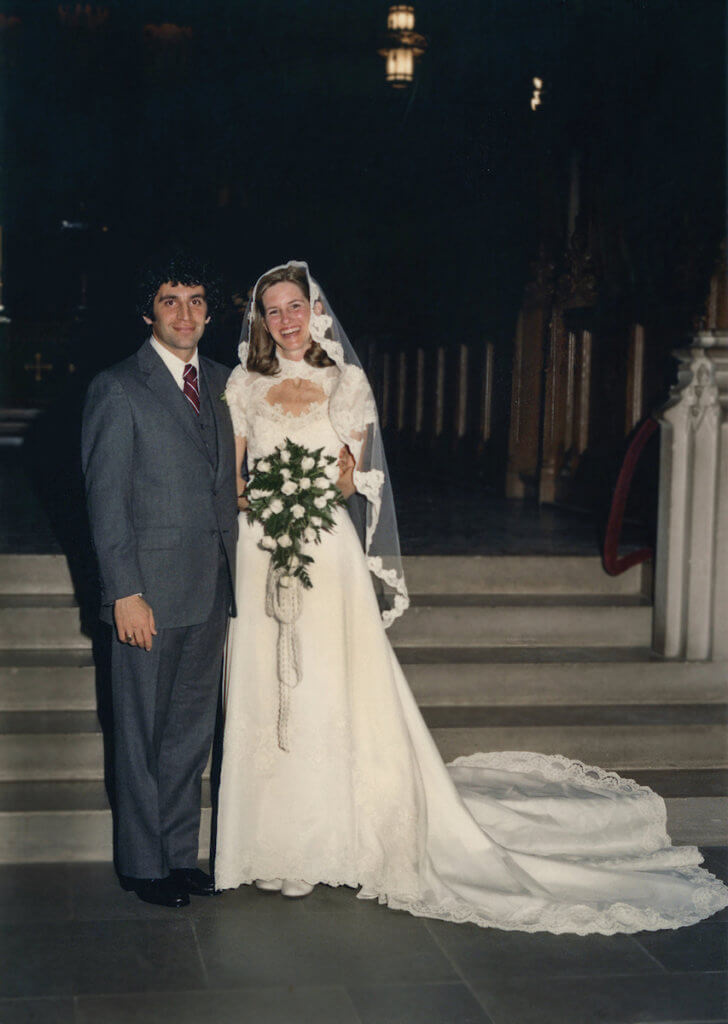 Paul and Mary Klotman photographed on their wedding day in 1981 at the Duke University Chapel.

Mary Klotman, on the other hand, wasn’t sure if her future was in academia. Once she realized that she wanted to pursue a career in academic medicine, she knew she needed a focus—an area of expertise to help her stand out from the rest of the crowd. She found one at the National Institutes of Health (NIH) in Washington, D.C.

“The HIV epidemic was exploding,” Mary recalled. “It was very exciting because I trained in infectious disease, so I saw the first cases of HIV at Duke and then I went into the top lab in the world for HIV research, where the virus was discovered. New drugs were being developed and you could really see it in action.”

In what would be their first of many moves, the Klotmans left faculty jobs at Duke and moved to Washington, D.C., for new jobs at NIH. Mary was a member of the Public Health Service and trained and worked in the laboratory of tumor cell biology, while Paul became chief of the molecular medicine section in the laboratory of developmental biology. While there, they had their first scientific breakthrough as a couple.

“Fortuitously, another lab in my institute was working with transgenic [genetically modified] mice and they created the first HIV transgenic mouse,” Paul said. “The mouse developed a disease, but they were not sure what it was. I was one of the few physicians in the entire institute, so they came up to me with this mouse that they thought was obese and asked me, ‘What’s wrong with this mouse?’ I said, ‘It looks like ascites [abnormal build-up of fluid in the abdomen] and edema [swelling], not fat, and that would be liver or kidney disease.’ As it turns out, it was a disease very much like the one caused by HIV in man.

I began to study this new major problem in the nephrology field, so our research converged.”

“We did everything together,” Mary said. “We had our labs together, our offices next door, we walked to work together—not because we were obsessed with each other, but because it really worked. We loved our science, we loved our trainees—so it just worked.”

While the Klotmans were building their medical careers, they were also determined to start building a family together. After adopting their first son, Sam Klotman, their second son, Alex Klotman, became the first baby born from in-vitro fertilization (IVF) at Duke University.

“We had a rough time starting a family,” Mary said. “We had very painful loss of pregnancies early on. It was really the beginning of IVF. They weren’t even freezing embryos at first. It was primitive and expensive back then, but it was interesting to see that field change the options for women in so many ways. It was stressful, but we just did it.”

Once their children were raised, opportunity came knocking again for the couple. Mary was recruited by Duke University to chair the department of medicine and Paul was recruited by Baylor College of Medicine to serve as president and executive dean. At the time, Baylor was still reeling from a split with Methodist Hospital and financially challenged by a failed attempt to start its own hospital.

Overnight, the couple went from working and living together to running medical schools in different states. In July 2017, Mary was named dean of Duke University School of Medicine.

“It would be very hard for us to be deans of medical schools in the same city,” Paul said.

“Schools compete with each other, so it would take two very confident presidents of universities to feel comfortable having a husband and wife team leading their institutions. … They would expect collusion.” 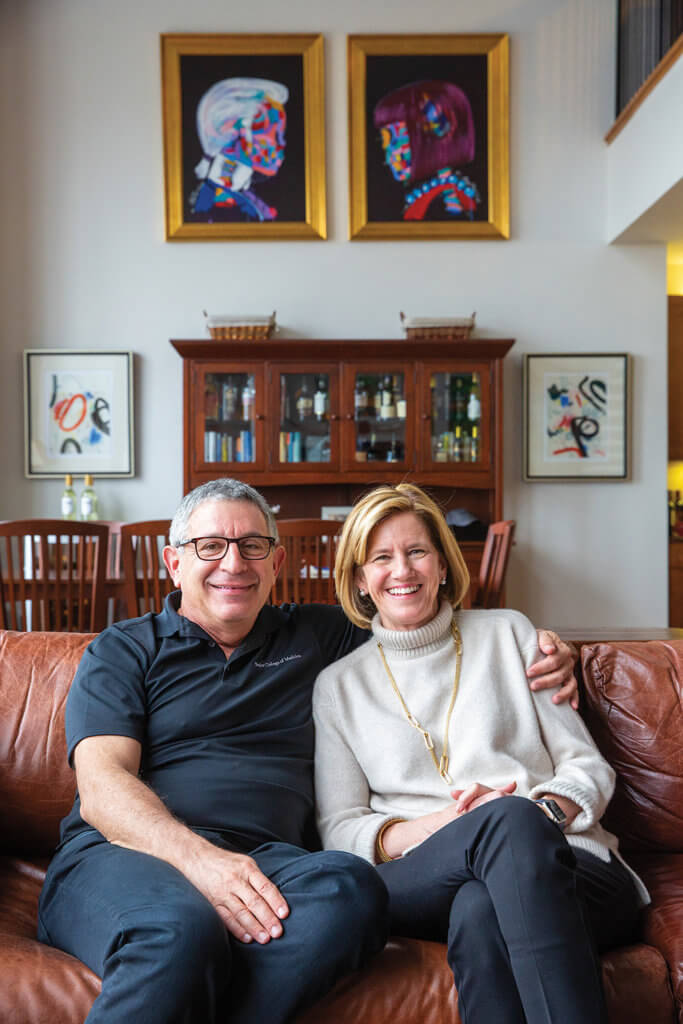 The Klotmans relax in their Houston, Texas home.

The Klotmans have different leadership styles.

“My wife is a fantastic leader—just unbelievable—and she leads by example,” Paul said. “She is constantly a cheerleader for the organization, always optimistic. And when she stands up, people just instantly admire her. … But people would rather go out and party with me. I’m much more informal. I think our principles are exactly the same and I don’t think we’ve ever disagreed on what we are trying to accomplish—ever … but the mechanisms by which we accomplish [our goals] are night and day.”

As they approach their 10th year of commuting, the Klotmans have only missed two weekends together and seem closer than ever.

“Every three months, we take out our calendars and talk about events at Baylor and events at Duke,” Mary said. “But usually it’s driven by things we should prioritize at each institution. And up until recently, we had our parents up in New York, so we would go there or to the Council of Deans.” [The council convenes deans from the Association of American Medical Colleges’ member medical schools to address issues related to academic medicine.] 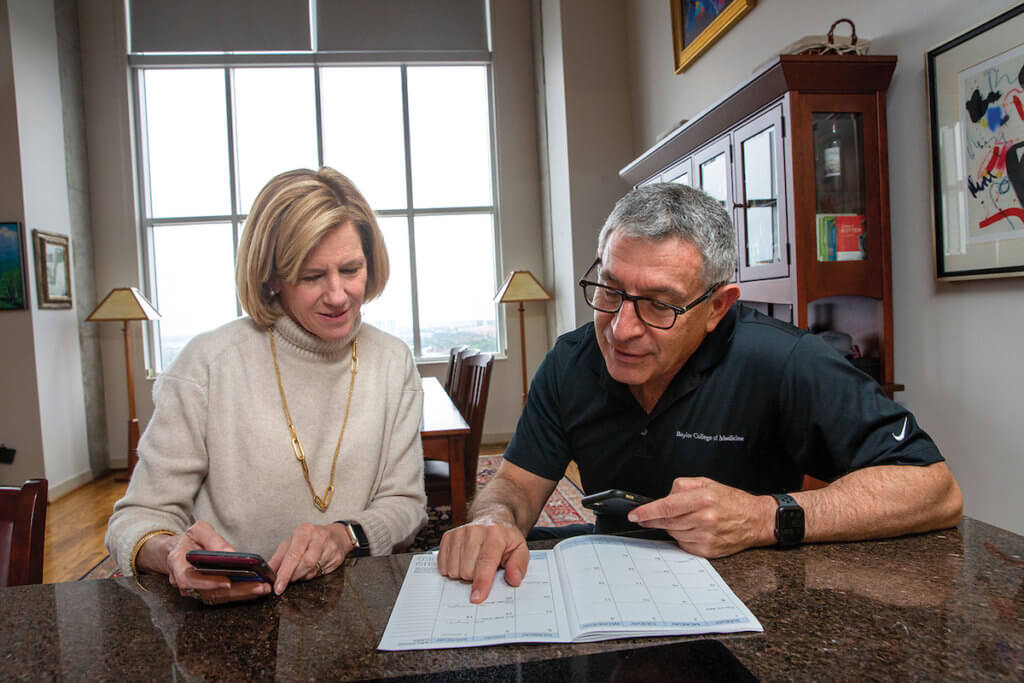 Mary and Paul Klotman coordinate their busy schedules for the next few months.

Paul believes the commute has made them value their time together even more than when they lived in the same place.

“When we were together and in our other jobs, we were working through the weekends,” he said. “You couldn’t really tell Saturday and Sunday versus Monday. Now, I take the weekends off, especially if I’m in Durham. … Our house there is a country home. It’s like a spa.”

Their secret to a successful marriage? Friday night dates and a willingness to be flexible. When in Houston, you might find the couple at Spanish restaurant BCN Taste & Tradition. When they’re in Durham, you might find them eating seasonal American cuisine at Nana’s.

After all this time, they still haven’t run out of things to talk about.

“Medicine is so interesting right now. Everything is changing, so our conversations after 38 years of marriage are just as interesting as the first month we met,” Mary said. “A lot of it is really thinking about health care and how do you train young physicians. … These are complex institutions and there is no road map going ahead. We are all changing, so I’m glad I have someone to talk to all the time about it.”