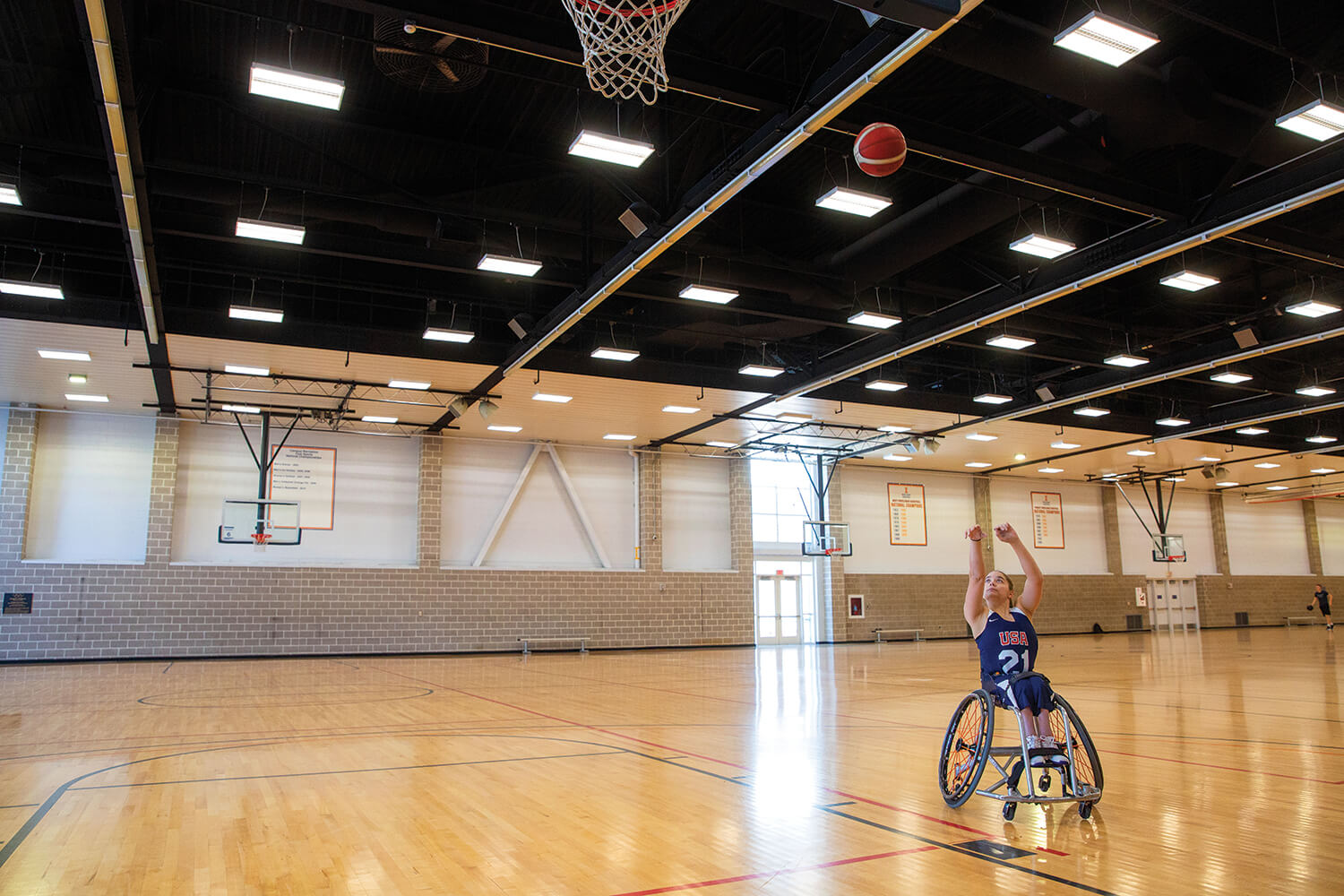 ORIGINAL STORY: The 2020 Tokyo Paralympic Games are just months away, but native Houstonian and competitive wheelchair basketball player Kaitlyn Eaton has been chasing her Olympic dreams for nearly a decade.

Eaton was born with sacral agenesis, a rare birth defect in which the bones of the lower spine are missing or misshapen, impairing development in the bottom half of the body. She has never had functional legs.

“To me, my disability was always really normalized,” Eaton said. “When I was born, one of the things the doctor told my mom was that she should just raise me as one of her other children. I have an older brother and a twin sister, so I didn’t get any special treatment growing up because of the disability.”

Eaton, now 25, describes her twin sister, Kelsey, as a built-in best friend, even though the two could not be more different.

“Growing up, we would make fun of the fact that all of our friends still got us confused because we have different facial features, we are not alike and, obviously, one of us is in a wheelchair,” Eaton said.

Although she wasn’t very interested in sports as a child, Eaton joined the TIRR Memorial Hermann Junior Hotwheels Team in Houston during her sophomore year at Jersey Village High School. That’s when her passion for basketball was ignited.

“I had a pretty late start when it comes to playing wheelchair basketball in general, especially having a disability since birth,” Eaton said. “It is a very difficult sport to get the hang of, especially with the ball. When I first started, I was horrible. I was not good at basketball at all.”

Growing up, Eaton underwent roughly 10 surgeries at Shriners Hospitals for Children – Houston to give her body more flexibility and, later, to help her fit more easily into her basketball wheelchair.

“People with sacral agenesis, their muscles don’t really work so their bodies often are contracted,” said Allison C. Scott, M.D., an orthopedic surgeon at Shriners Hospitals for Children – Houston. “Kaitlyn’s knees were straight; they didn’t bend. It was fine when she was a little kid, but when she got to an adult size, it was pretty hard to do things. We had to do a big surgery to bend her knees and then another surgery to reposition her foot.”

In addition to the numerous surgeries Eaton endured, she had other health challenges growing up, mostly involving her bladder and kidneys. This is not uncommon for individuals with sacral agenesis.

“It was pretty hard, especially when I started getting involved in different groups in school,” Eaton said. “You don’t want to be that kid that is always missing classes, for whatever reason. My sister is never sick, rarely goes to the doctor, and then I was in the doctor’s office all the time. That made it a little bit harder, too, seeing what life could be like not having to go to the doctor so much.”

But she has made up for lost time. After high school, Eaton accepted a scholarship to play basketball for the University of Illinois at Urbana-Champaign (UIUC), where she earned her undergraduate degree in community health in 2017. Currently, she is working on a graduate degree in social work at UIUC and training for Paralympic tryouts.

“I love the competitive part of basketball and I have always been competitive,” Eaton said. “But the reason I play is for the friendships and connections that I have built, whether it is in the Houston community, my collegiate community, or now on the international level.”

Wheelchair basketball is played on the same size court as traditional basketball and players use regulation basketballs.

“I think the striking thing is that there are not that many differences between wheelchair basketball and regular basketball, other than factoring in the wheelchair,” Eaton said. “In wheelchair basketball, there is no double-dribble rule, but at the competitive level I’m playing at now, most people aren’t going to do that. It’s just practicing to get used to that movement and understanding how your body works.”

Wheelchair basketball also uses a classification system to rank players and their functional mobility ranges. Each team has five players, Eaton explained,
and the total classification score for the team cannot surpass 14. Eaton is a 1.5 on the scale.

“The scale ranges from 1.0 to 4.5 and those are assigned to individual players based on ability. … A 5 is an able-bodied athlete,” she said. “The scale is based on what you do and do not have … an amputee, a wheelchair, lacks ab function.”

“On my basketball chair, the wheels are angled outward,” she explained. “It provides more stability and helps with speed and makes your chair more aerodynamic and it helps with turning. Another difference is, on my everyday chair, I only have four wheels; I have the two big ones and then the two front casters. On my basketball chair I have two big wheel and, technically, four casters—two front and two back casters. This helps with stability and prevents you from falling over backwards.”

The other big difference? Eaton’s regular wheelchair has no strapping or seatbelt, but her basketball chair has multiple straps.

“In my basketball chair, I actually have three different straps—a waist strap, a leg strap that goes over the top of my legs and a Velcro strap that goes over my feet,” she said. “We use those, obviously, to keep us in the chair, because people are falling down left and right, so it keeps you tight in your chair. We explain it like, you want to fit in your chair like a shoe would fit on your foot. … Any sort of movement that I make with my body, my chair will follow.”

In 2019, Eaton competed in the Parapan American Games in Lima, Peru with the rest of the U.S. Women’s National Wheelchair Basketball Team. She spent four years trying out for the team before making the official squad in 2017. Even then, she almost didn’t make it. Eaton was not part of the initial roster and had pretty much given up on making the team.

“I didn’t think I was going to come back. … I didn’t think I would play again. … I was pretty much over it at that point,” Eaton said. “Fortunately, a couple of months into the season, one of the girls on the roster, she had to pull out and so Trooper Johnson, the head coach, called me and offered me the spot right then and there.”

Eaton credits the initial setback for her success today.

“It was a mixture of emotions,” she recalled. “I went from the lowest of lows to, obviously, pretty high, but it was a blessing that I got cut. I kind of went into the 2017 tryout thinking that I deserved to be on that team and that I didn’t have to work as hard as everyone else because I thought I belonged there. But then getting cut really showed me that I had to put 100 percent effort into it if I wanted to continue.”

To prepare for Paralympic tryouts, Eaton is following a rigorous training schedule in addition to her already-busy life attending classes and serving as the assistant coach for the women’s wheelchair basketball team at the University of Illinois.

Although Eaton was part of the U.S. Women’s National Wheelchair Basketball Team that qualified for the 2020 Paralympic Games in Tokyo, she and her teammates did not automatically qualify as individuals. In January, she will travel to the Olympic Training Facility in Colorado Springs, Colorado, to try out for a spot on the 12-woman team once again.

“Going into a tryout in a Paralympic year is nerve-racking, especially with it being my first one,” Eaton said. “But I’m feeling confident and I’m putting the work in so, hopefully, it all goes well. The good news is with Paralympic tryouts, they keep the teams as similar as possible just because you have team chemistry. … So it does give you a bit of a leg up that you have been on previous teams, but it is by no means qualifying you to stay on the team.”

Off the court, Eaton is excited about completing her graduate degree in social work and, hopefully, returning to Houston.

“I chose social work because I love working with people in any way that I can,” she said. “I want to work with older adults who are in the hospital and help them through that transition period, or to work at TIRR and give back to an organization that gave so much to me and help other kids find their way through their disability and what is going to bring them to reach their goals.”