Robot-powered outfit is being fashioned to help seniors walk

Robot-powered outfit is being fashioned to help seniors walk 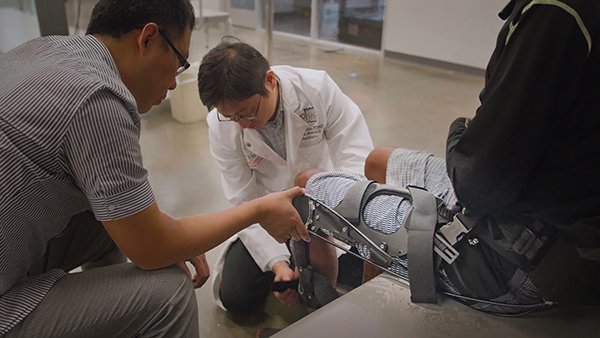 A new line of wearable robotics developed by The University of Texas Health Science Center at Houston (UTHealth) and The City University of New York, City College (CCNY) could keep seniors on their feet longer.

Think of it as a lightweight version of the armor that comic hero Tony Stark dons as Iron Man when he fights villains. These mobility machines are called exoskeletons.

A prototype developed by Hao Su, PhD, of CCNY, and tested by Gerard Francisco, MD, and Shuo-Hsiu (James) Chang, PT, PhD, of McGovern Medical School at UTHealth, fared well in a pilot study of people with walking difficulties. Su is an assistant professor at CCNY.

Now with the support of a $1.3 million grant from the National Institute on Disability, Independent Living, and Rehabilitation Research (NIDILRR), Francisco, Chang, and Su plan to evaluate the model on seniors who have difficulty with their gait or stride.

Mobility is the most common disability among people 65 years of age or more in the United States, according to the U.S. Census Bureau. The Journal of Public Health reports that 32% of adults aged 65 years and older have a hard time walking three city blocks.

Conventional exoskeletons are typically heavy, bulky, expensive, and primarily suitable for individuals with little voluntary movement. “Our prototype is approximately 60% lighter than commercially available exoskeletons,” said Francisco, the chair of physical medicine and rehabilitation at McGovern Medical School and the chief medical officer at TIRR Memorial Hermann. “In addition, our model is run by the user, not the robot. Wearers aren’t forced to walk in a pre-defined path.”

Francisco, the Wulfe Family Chair in Physical Medicine and Rehabilitation at McGovern Medical School, said approximately 4.7 million people in the U.S. would benefit from powered lower-limb exoskeletons due to neurological disorders such as stroke, polio, multiple sclerosis, and spinal cord injury.

“Our long-term vision is to make assistive robots accessible to everyone who needs them,” said Chang, assistant professor of physical medicine and rehabilitation at McGovern Medical School and the administrative director of the NeuroRecovery Research Center at TIRR Memorial Hermann. “They could be worn underneath your clothing at home or at work.”

Chang added, “Despite the advancement of exoskeletons, state-of-the-art exoskeletons are not suitable to promote independence and community living. There is a pressing need for wearable robots that can improve the quality of life for broader populations in community settings.”

Richard Petty, MBA, co-director of the Independent Living and Research Utilization program at TIRR Memorial Hermann, is a co-investigator.

The research project is titled “Lightweight and Affordable Soft Knee Exoskeletons to Enhance Independent Living for Broad Lower-Limb Disability Populations” and is supported by the NIDILRR, part of the National Institutes of Health, (90DPGE0011).