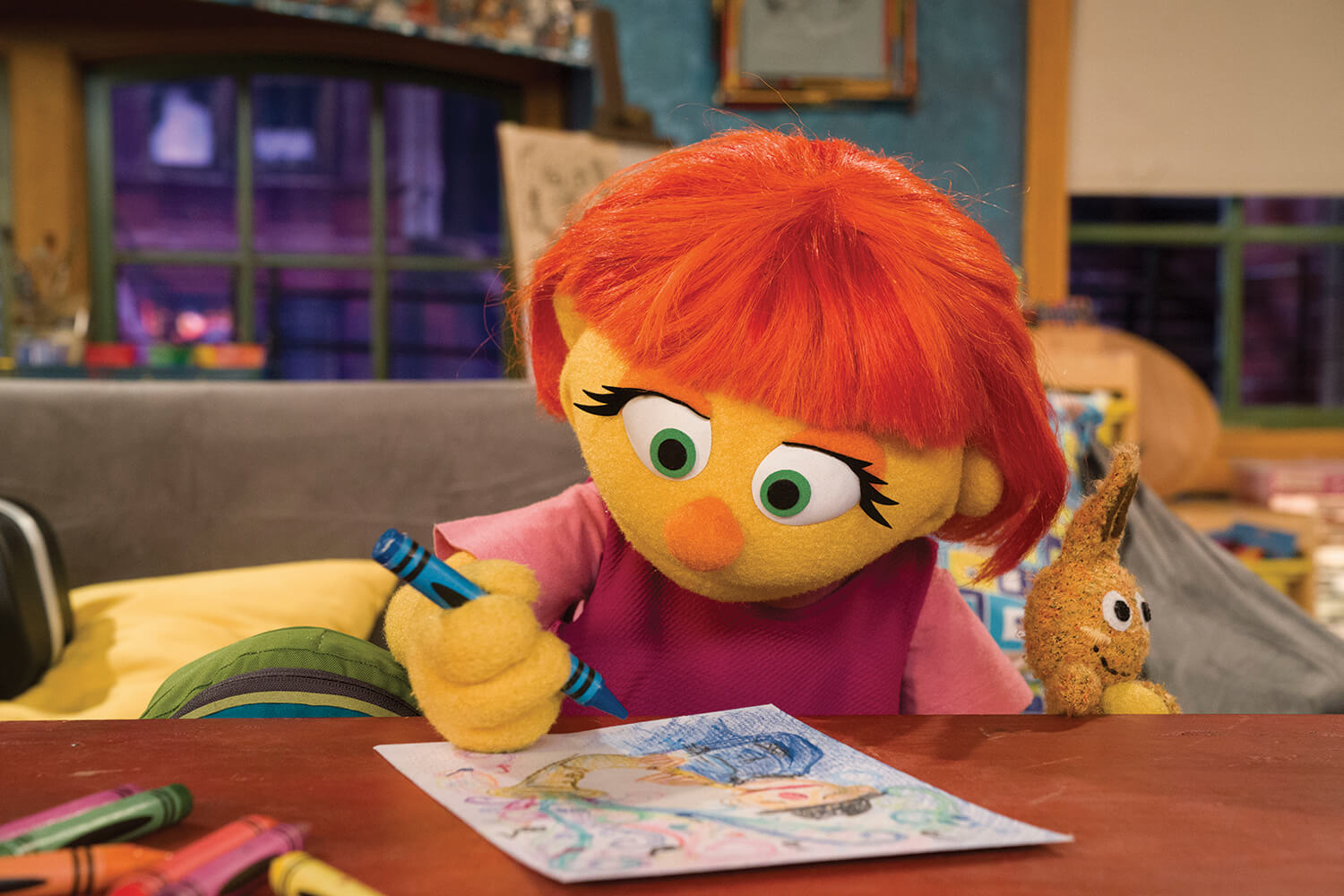 Julia is 4 years old, yellow, and wears her red hair cut short in a bob. When Big Bird first introduced himself to her on the April 10, 2017, episode of “Sesame Street,” the newest Muppet did not look up from the paper she was painting. Big Bird seemed confused, but Alan—a “Sesame Street” regular who owns the fictional Hooper’s Store—explained that Julia was just busy concentrating.

“Well, for Julia, it means that she may not answer you right away … and she may not do what you expect, like give you a high-five,” Alan replied.

The groundbreaking episode focused on inclusion and explained, in a clear and understated way, the differences between autistic and non-autistic individuals. Julia was heralded as a breakthrough for how autism is portrayed in the media.

“Julia is an autistic character who is consistently shown to be fully included in her community, as being a part of a loving family, being a good friend to other members of her community and standing up for others. That’s really revolutionary. That’s not usually how autistic people are depicted in the media—as having these ordinary lives and these valuable social roles and being a positive addition to the community around them,” explained Julia Bascom, executive director of the Autistic Self Advocacy Network (ASAN), a nonprofit run by and for autistic people. Bascom and ASAN, along with other autism organizations, were consulted for the creation of Julia’s character. Notably, the puppeteer who plays Julia has a son with autism.

But this summer, ASAN felt compelled to cut ties with “Sesame Street” after a partnership between the long-running television series, Autism Speaks (the largest autism advocacy organization in the country) and the Ad Council promoted resource materials that ASAN strongly opposes. The materials are attached to public service announcements (PSAs) that aim to lower the age of autism diagnosis by teaching parents how to identify signs of autism.

“Our goal is that we want to help as many people with autism as we can, and this public service announcement was about having children screened, learning the signs of autism, and, if necessary, to get the treatment and support that they may need to live their best possible life,” said Lisa Goring, the strategic initiatives and innovation officer for Autism Speaks, which also had a hand in the creation of Julia’s character.

It isn’t the PSAs, per se, that ASAN members disagree with—it’s the messaging in some of the resource materials offered by Autism Speaks, specifically the “100 Day Kit,” which contains information geared towards families of children under the age of 4 who have recently received an autism diagnosis.

Bascom said members of ASAN feel the 100 Day Kit in particular reflects much of the stigma and misinformation parents often encounter and that “Sesame Street” has been changing with the addition of Julia.

“Basically, [the kit] tells parents to grieve for their autistic child, as though that child had died. It actively discourages parents from accepting that their child is autistic, even though we know that parental acceptance is one of the most important things for a young autistic child,” Bascom said. ASAN also disagrees with the kit’s messaging about helping kids “get better” and the encouragement of certain intensive behavioral therapies, she added.

“It’s just focused on creating this mask for an autistic person,” Bascom said.

Rachel Fein, Ph.D., a licensed psychologist who works within the Autism Center at Texas Children’s Hospital, said she understands why self-advocates may be offended by the messaging in the kit. She added, however, that her responsibility as a provider is to offer as much evidence-based information as possible while also validating a family’s feelings.

“I don’t tell families how they should feel after they learn that their child has autism, but I certainly validate those feelings, whatever those might be,” said Fein, an assistant professor of psychology in the department of pediatrics at Baylor College of Medicine. “There are some families that, their journey to finally getting their child evaluated or finally getting the services that they need—for some it’s not a surprise for them, in fact, it’s almost a relief, because they have a name to describe some of the things that they’ve been seeing all along.”

But, Fein added, other families struggle with hearing the information.

“Some families, they describe it as grief,” Fein said. “Other families, they just describe it as, ‘I want the best for my kid; I want them to have the best life that they can possibly have.’ And I think that can be really challenging, especially for some of the self-advocates. They hear that and it can be saddening to hear, and it can be offensive, but I also think it’s coming from a place of a parent who never wants their child to experience any sort of struggle or pain.”

Fein said that she believes both Autism Speaks and ASAN serve important purposes and that their messaging isn’t mutually exclusive. She recommends resources from both organizations to families she counsels.

“I always tell my families … please consider your own individual family and your own values when exploring the resources available. It’s similar to how we describe autism as a spectrum—there’s a spectrum of opinions and ways of thinking about the diagnosis of autism, and I think that we’ve really come a long way with how individuals with autism or autistic individuals are portrayed in the media,” Fein said. “But we have a really long road ahead of us, so I’m really happy that folks are having these difficult and important conversations, and I really just hope they don’t end here.”

“Julia really was developed by bringing the community together, and we would hope that maybe that would continue as this campaign continues to reach more families,” she said. 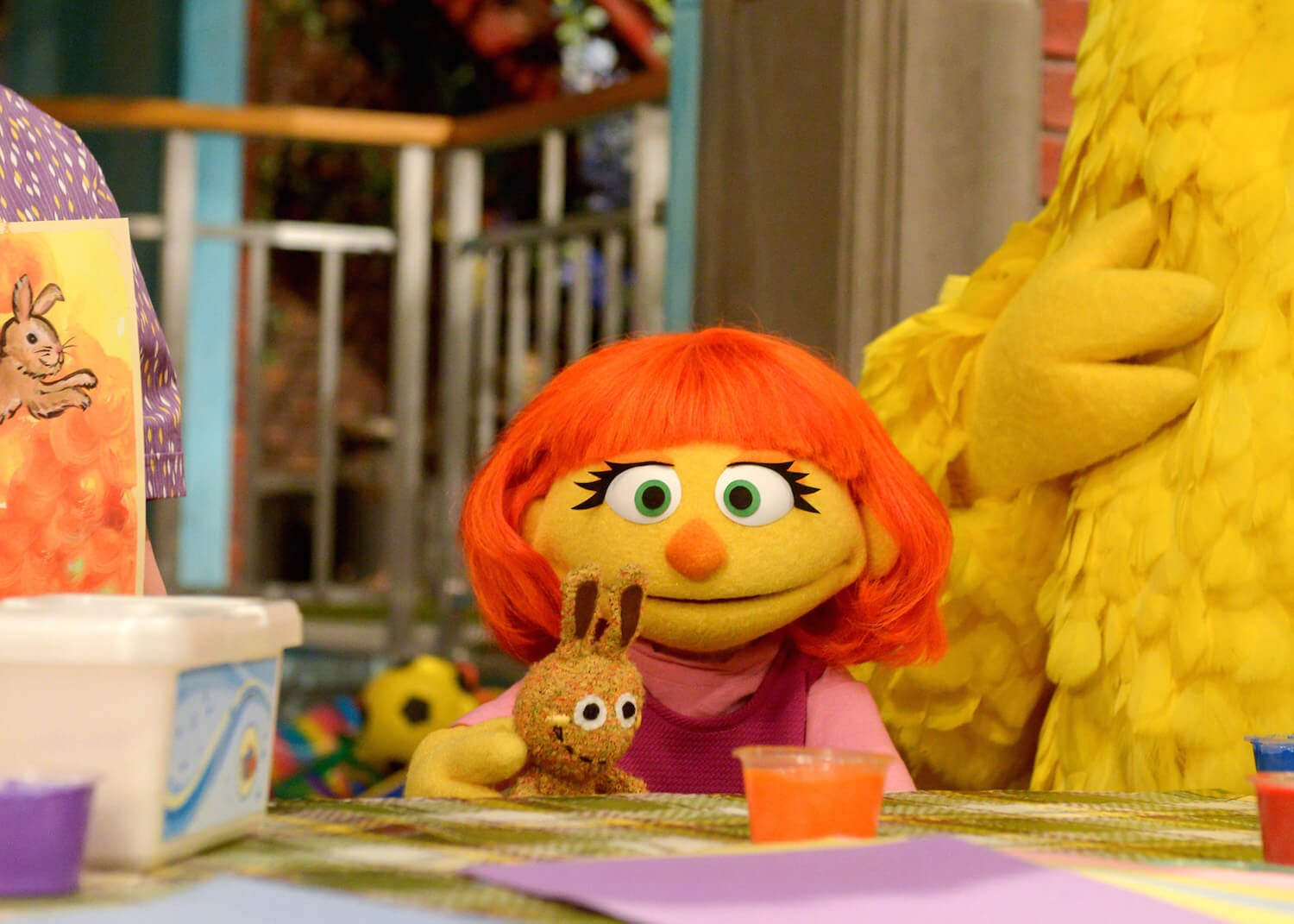 Julia is pictured on an episode of “Sesame Street.” (Credit: Zach Hyman for Sesame Workshop)

Despite the recent controversy, Julia’s character has been welcomed with open arms by advocates and individuals with autism.

“I think one of the best things that ‘Sesame Street’ has done in consultation with autism organizations is that they don’t just bring awareness, but they promote inclusion,” Fein said.

The show, which celebrated its 50th anniversary in November, explores how Julia’s difficulty with social interactions and sensitivity to sensory aspects of her environment affect the individuals around her.

“They show how children and adults around her really have so much empathy and aren’t just aware of her difficulties, but make a point of taking the time to get to know her and put forth the effort to include her in everything that they do,” Fein said.

Goring stressed the importance of those interactions.

“Children watching at home can actually see the modeling of the characters on the show and how they accept Julia and some of her challenges, and that they support her in a very natural way,” she said.

Bascom said that every detail about Julia’s character was intentional and meant to promote acceptance, including the fact that she is female, an underdiagnosed group in the autism community. In addition, Julia uses an AAC (augmentative and alternative communication) device and often wears noise-canceling headphones.

“She’s normalizing a lot of the accommodations that a lot of autistic kids, especially young kids, are going to need,” Bascom said, adding that she’s heard stories of parents who have used Julia to explain their own child’s diagnosis to them, as well as speech therapists who have created handmade “talkers” just like Julia’s, so their patients who use AAC devices could have Julia dolls who also use an AAC device.

One person with autism

Expanding the conversation around autism has been an ongoing struggle for advocates, in part because autism exists on such a wide spectrum.

On Julia’s debut “Sesame Street” episode, Alan embraced this truth perfectly when he spoke to Big Bird about what autism meant “for Julia.”

“I think that the main takeaway is to be respectful and to be inclusive, and how you go about that means asking the person,” Fein said. “Don’t make assumptions, but find out: how do you want to be talked about?”

ASAN has made giant strides in helping the media and general public talk about autism. The group’s tag line, “Nothing About Us, Without Us,” reinforces its mission to empower autistic individuals and to ensure they have a seat at the table. Bascom said this is especially significant when it comes to depicting autism in the media, as Julia does.

Julia was created in 2015 as part of a Sesame Workshop initiative called Sesame Street and Autism: See Amazing in All Children, which supports families with free bilingual resources, available online at sesamestreet.org/autism. Sesame Workshop is the global nonprofit behind “Sesame Street.”