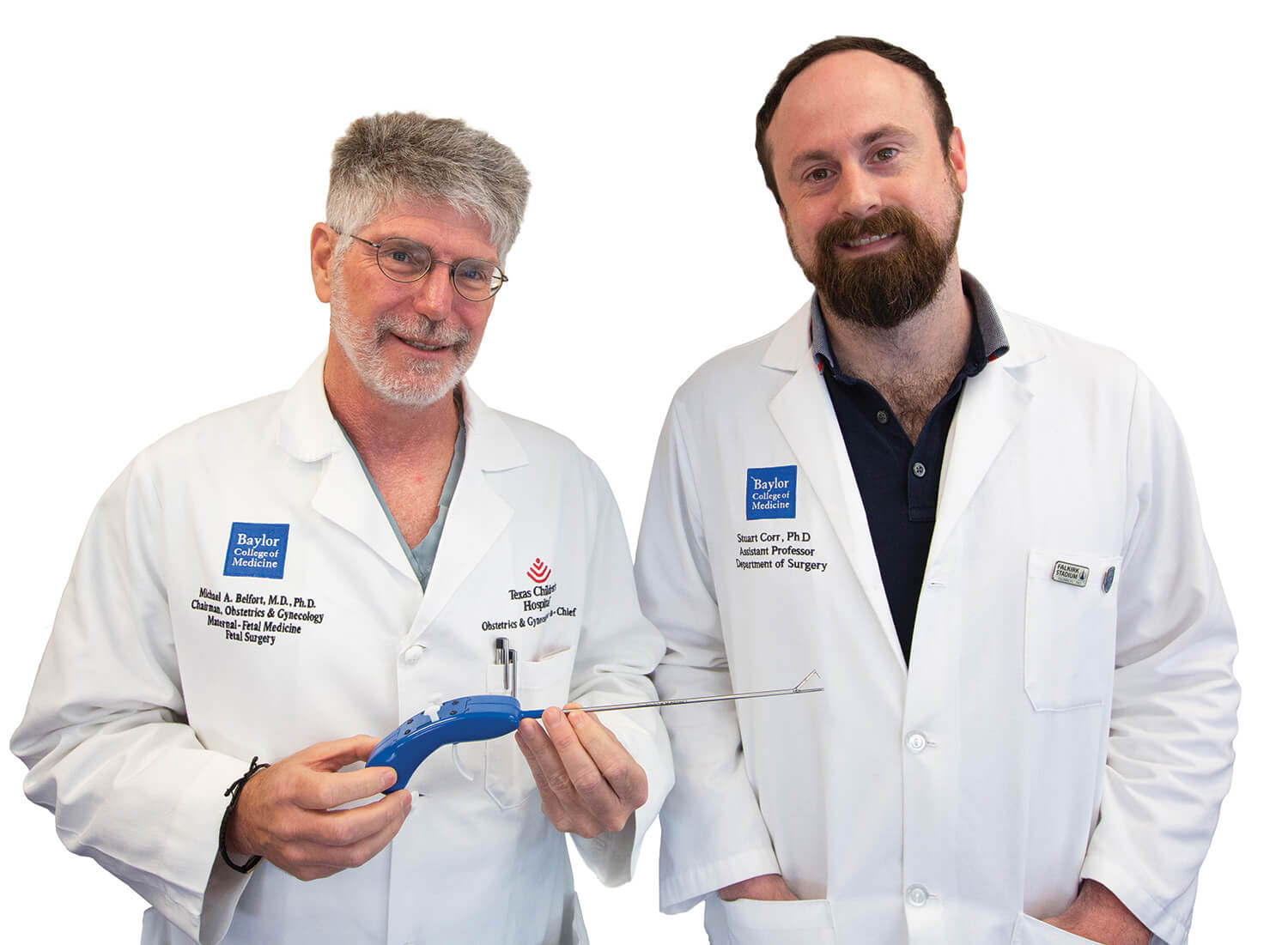 Five years ago, Michael A. Belfort, M.D., Ph.D., developed a two-port fetoscopic surgery (a procedure that accesses the fetus by way of the uterus) to repair spina bifida, a birth defect in which a developing baby’s spinal cord and nerves are exposed through a gap in the backbone. In addition to paralysis, spina bifida often causes hydrocephalus—water on the brain—necessitating a shunt to drain the fluid.

Although Belfort has performed more than 70 of these fetal surgeries, he knew that a better surgical tool could streamline the entire process.

Surgeons have been operating on fetuses to repair spina bifida for two decades, but Belfort created a specific technique. During the nearly three-hour surgery, he and his team suture the gap in the spine in two layers—three to four sutures in the first layer and five to six sutures in the second.

Each stitch takes 11 to 12 minutes to complete.

“That is almost two hours of suturing,” Belfort explained. “For this surgery, you do not want to expose the fetus to more than three hours of anesthesia and, now, we are right at that, so we want to get our time down.”

As soon as he started performing the surgery, Belfort began sketching devices that could work better for the in-utero laparoscopic procedure. But he had a hard time finding a team to build the new device.

“The main thing for us is that this device will shorten the time of surgery,” Belfort said.

Many engineers around the country tried to make a smaller version of the predicate device—the tool Belfort is currently using to perform the surgery. They all said that it was too technically difficult. Not only was it a challenge to 3D-print a device that small, but to create the tool by machine would be so expensive that it would not be cost-effective.

Yet just down the street, Stuart J. Corr, Ph.D., director of the Interdisciplinary Surgical Technology and Innovation Center (INSTINCT) at Baylor College of Medicine, was up for the challenge.

“It was a nightmare to begin with,” Corr recalled. “We went about it in-house. I had a couple of team members and we started jotting down concepts. The first thing we did was directly trying to make a smaller version of the predicate
device, but the physics just didn’t allow it. … When you start making those things smaller, the whole thing changes so we had to completely redevelop the concept.”

“Watching the surgery was a very interesting experience. It was life-changing,” Corr said. “I had just had my two children and seeing that, and my wife being pregnant at the same time, was like, ‘Wow. OK. We’ve got to get Dr. Belfort exactly what he needs.’”

“We sponsored a Rice Capstone project so we had four engineers who used this idea and went about it for two semesters,” Corr said. “Then we took it to Joseph Labdik, who runs JSL Innovations at CDI and, two months later, they popped it out.”

TinyStitch is roughly a foot long and looks like a kitchen utensil or a long-reach lighter, but Belfort believes it will trim operating time significantly—from three hours to a mere 15 minutes.

“This is the first iteration of what we believe will be a significant improvement of the predicate device,” Belfort said. “It’s basically a human sewing machine. … It will require much less time-intensity and training-intensity.”

Because the predicate device has already been tested and approved for humans by the U.S. Food and Drug Administration, TinyStitch may not require further testing before it is used in surgeries.

“The whole thing only took a couple of years, but now we know we can make these devices at that scale and we know what we can add to it to make it better,” Corr said. “We just kept pushing and prevailed.”