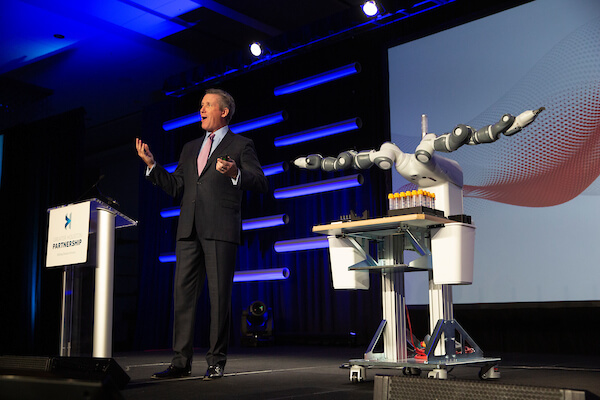 William F. “Bill” McKeon brought the future of the Texas Medical Center to a huge crowd on Thursday in a presentation that depicted a flyover of the medical city and an animated short about the forthcoming TMC3 collaborative campus.

TMC3, which is expected to be built in the next three to five years, will be the new TMC “city center,” said McKeon, president and CEO of the Texas Medical Center. “We’ve been working on this now for three years. We expect to do financial close in March of next year and break ground.”

McKeon’s hourlong talk was part of the State of the Texas Medical Center luncheon, presented by the Greater Houston Partnership at the Marriott Marquis Houston on October 31, 2019. Several hundred businesspeople and guests attended, including Mayor Sylvester Turner.

In addition to highlighting the TMC’s international reach with a new BioBridge partnership with Denmark—BioBridge partnerships with Australia and the United Kingdom were established in 2016 and 2018, respectively—McKeon also emphasized accomplishments and growth among the TMC’s 61 member institutions that work to advance innovation and patient care.

Houston Methodist Hospital’s new 7 Tesla MRI (the Siemens MAGNETOM Terra) is one of the world’s most powerful scanners and can detect what other MRIs cannot.

Gold nanoparticles that kill cancer are among the research wins at Rice University that stand to have a lasting impact on health care.

The University of Texas MD Anderson Cancer Center—which received attention over the past year because of Jim Allison, Ph.D., who co-won the 2018 Nobel Prize in Physiology or Medicine for his immunotherapy work—has expanded to include centers in League City, The Woodlands and West Houston. A Sugar Land location is planned for 2024.

The University of Houston awaits a new building on a 43-acre tract near MacGregor Park on Martin Luther King Jr. Blvd. at Old Spanish Trail.

Texas A&M University’s engineering medicine program known as EnMed and its first class of “physicianeers” are ready to occupy a new building under construction at Holcombe and Main.

University of St. Thomas-Houston is addressing the nurse shortage with an accelerated bachelor’s degree in nursing and a fast-track doctoral program.

The University of Texas Health Science Center at Houston has a building under construction that will become the nation’s largest academic psychiatric hospital with 240 patient beds. It is set for completion in 2021.

Lance Black, M.D., associate director of the TMCx accelerator program, took the stage in a black cape—an homage to Halloween—to discuss companies that have benefited from the TMC Innovation Institute ecosystem. He also introduced three new programs established in the last year by the 5-year-old institute.

The 40,000-square-foot TMCxi facility has opened “to support industry partners, investors and other select service providers” so innovators have access to space and subject matter experts in the same building, Black said.

TMC Alpha was formed to support member institutions and their employees who are interested in commercialization. “That physician in the OR who decides—‘I have an idea. Where do I go next? Who do I talk to? How do I validate this idea?’—can now go to TMC Alpha,” Black said.

TMC ACT is a new cancer therapeutic accelerator supported by a Cancer Prevention and Research Institute of Texas (CPRIT) grant.

At the end of the presentation, a robot joined McKeon onstage to demonstrate how machines can perform laboratory tasks and to celebrate ABB, the international robotics company that opened a 5,300-square-foot space in the TMC Innovation Institute in September.