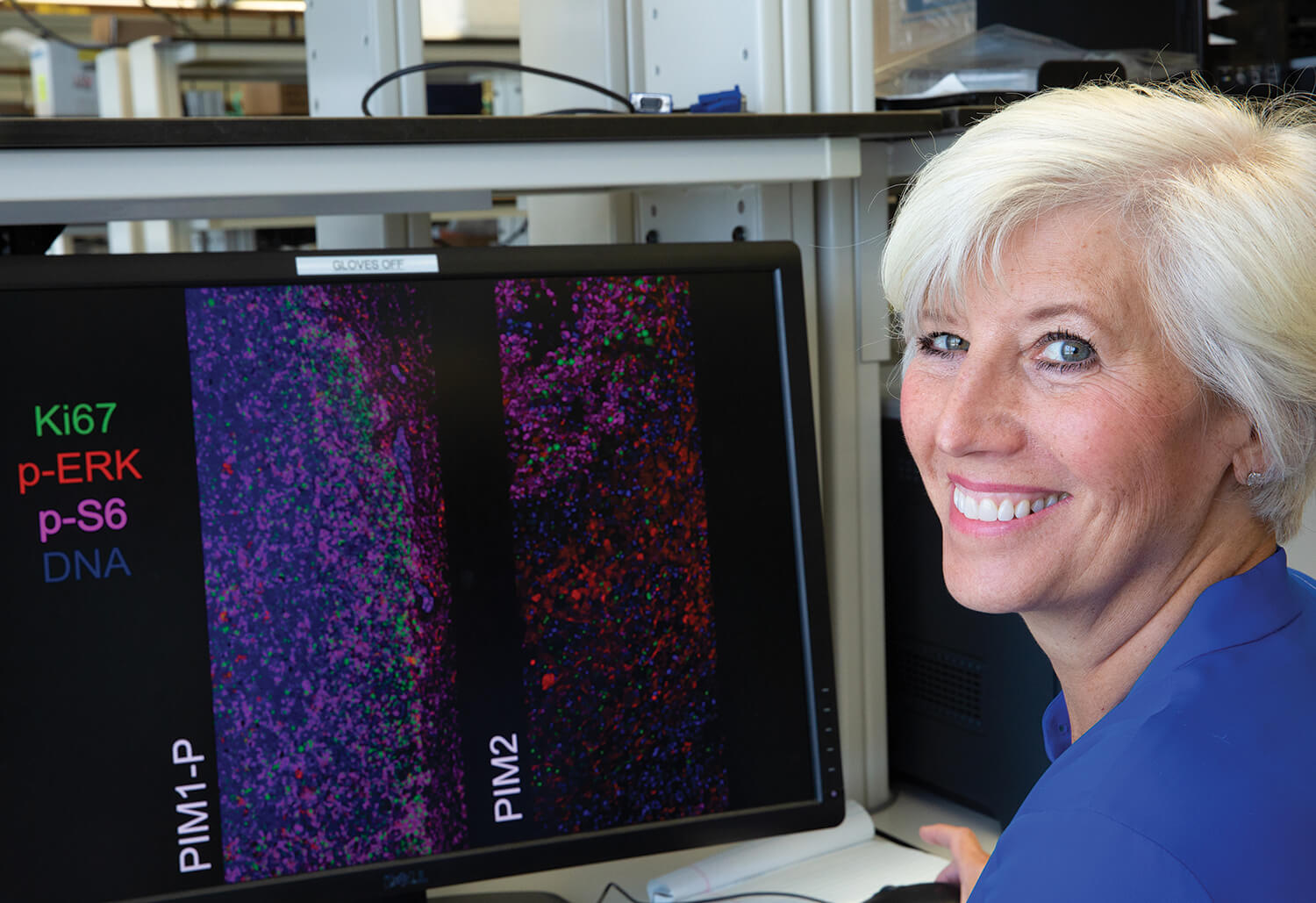 When chemotherapy fails, what’s next? That’s the question researchers at The University of Texas MD Anderson Cancer Center are trying to answer for patients with triple negative breast cancer (TNBC), which responds to chemotherapy only 50 percent of the time.

“The standard of care right now for all women with newly diagnosed TNBC is frontline chemotherapy, and that’s because half of the women do very well. At the end of their course of treatment, they’ll have very little to no tumor left,” explained Helen Piwnica-Worms, Ph.D., a professor of experimental radiation oncology at MD Anderson. “However, 50 percent of the women will have significant residual tumor left. For those women, we have no molecularly targeted therapies to offer at this time, and most of them, within 3 to 5 years, succumb to their disease. This is very much an unmet need.”

TNBC has a poorer short-term prognosis than other subtypes of breast cancer according to the American Cancer Society, which estimates that 15 to 20 percent of the approximately 268,600 new cases of breast cancer diagnosed in women this year will fall into the TNBC category.

Triple negative breast cancer is defined by what it is not as opposed to what it is, Piwnica-Worms explained. It is named for what is absent in the tumor, meaning that the three most common types of receptors attributed to the growth of breast cancer tumors—estrogen, progesterone, and a human growth promoting protein, known as HER2/neu—are not present.

Identifying and developing molecularly targeted therapies for this type of breast cancer has been extremely difficult.

“TNBC is a particular challenge because, as the name implies, these breast cancers don’t express any of the three proteins that can be specifically targeted with drugs. Treatment options are further limited because some TNBCs don’t respond to conventional chemotherapies,” said Lynne Elmore, Ph.D., director of translational research for the American Cancer Society. “Clues to designing better therapies will be revealed as scientists uncover the ways cancer cells adapt and survive treatments.”

Thanks to Piwnica-Worms and a group of colleagues at MD Anderson and The University of Texas Health Science Center at Houston (UTHealth), the scientific community is one step closer to understanding those clues.

After creating mouse models of TNBC by using tumor biopsies from patients, the researchers discovered that TNBC cells can develop resistance to chemotherapy by turning on reversible molecular pathways—rather than by acquiring or selecting permanent adaptations, or genetic mutations, as researchers previously thought.

“These tumors were entering into this new state of drug tolerance, where they could survive in the presence of the chemotherapy drug, and then once the drug went away, they just regrew and you could hardly tell the difference—it was as if they’d never been treated,” Piwnica-Worms said of the discovery, which was published in the journal Science Translational Medicine, with trainee Gloria Echeverria, Ph.D., as lead author. The full study is part of the ARTEMIS clinical trial headed by Stacy Moulder, M.D., which is funded by MD Anderson’s Moon Shots Program and focuses specifically on new therapies for chemotherapy-resistant TNBC.

The researchers then turned to the newly discovered molecular pathways to try to identify any vulnerabilities that could lead to new ways to target the tumor cells.

“We saw that one of the pathways that was downregulated in all three models that we were testing was glycolysis, and when we mined publicly available patient data sets, we saw this was common in patient samples, as well,” Piwnica-Worms said.

It so happened that MD Anderson’s Institute of Applied Cancer Sciences recently developed a drug called IACS-10759 that targets a compensatory pathway, which compensates for the loss of the glycolysis pathway.

“Generally, cells that downregulate glycolysis have a dependency on a compensatory pathway to survive, in this case, oxidative phosphorylation, and this is what this new drug targets,” said Piwnica-Worms. “We worked with that group and we said, ‘OK, let’s treat these tumors with the chemotherapy and then add in this novel inhibitor and see what happens.’”

While the IACS-10759 did not eradicate the tumor cells completely, it did significantly delay their ability to regrow after treatment—lending hope for a new “targeted” therapy for TNBC.

Eventually, the researchers hope to identify which TNBC tumors are resistant to chemotherapy prior to treatment, so that those patients can avoid chemotherapy altogether and, ideally, turn to a targeted combination therapy that could include the IACS-10759 drug.

“We don’t expect a single targeted therapy will ever eradicate this, so we really need to think about its unique properties and how we can combine different therapies to make a major impact,” Piwnica-Worms said. 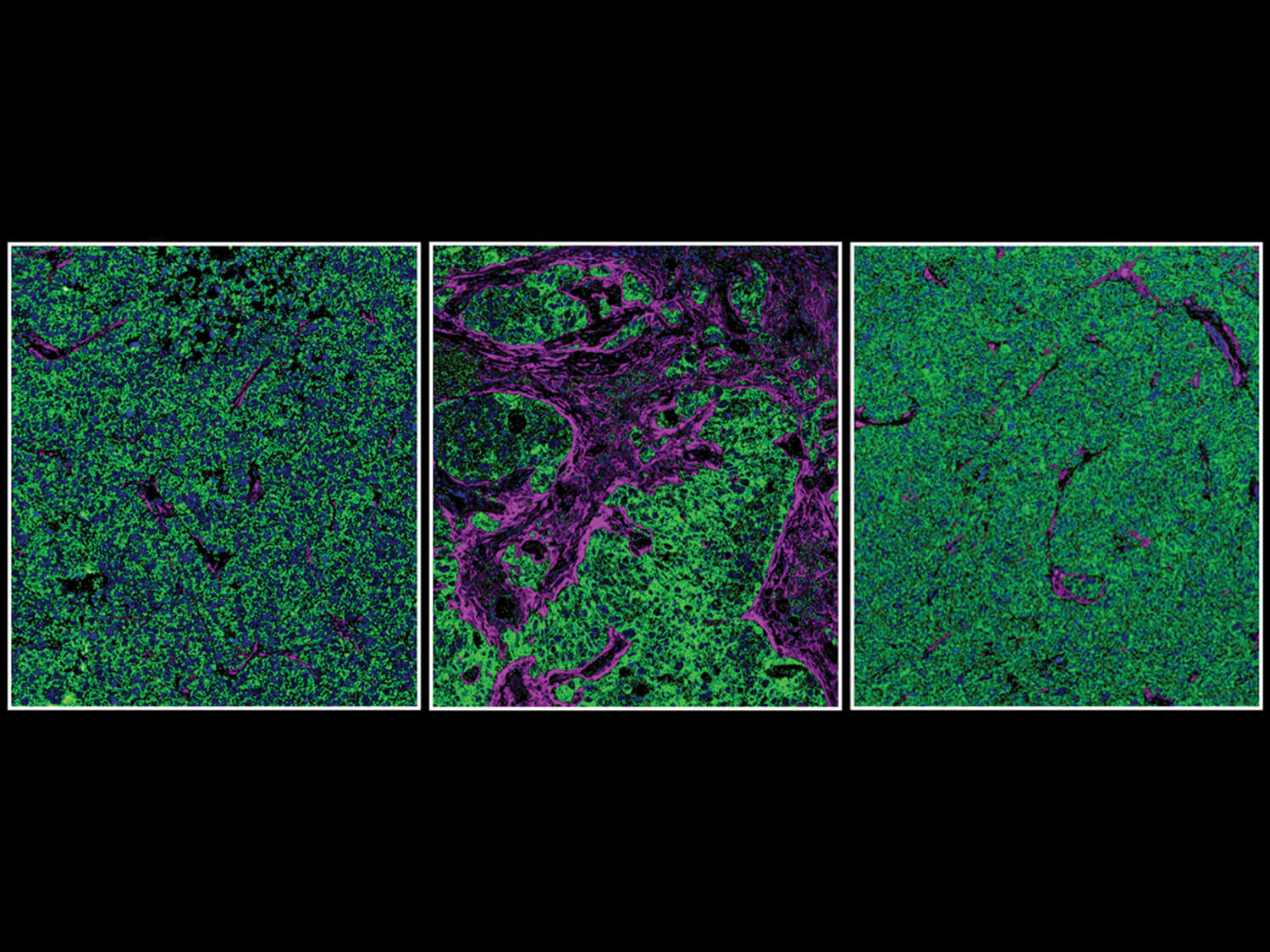 The images above show tumor cells from mouse models of triple negative breast cancer, created from patient biopsies. The first view shows the original tumor, the second view shows a tumor that has been treated with chemotherapy, and the third view shows a tumor that has regrown, despite the treatment from chemotherapy. Researchers found that some tumor cells developed a resistance to chemotherapy by turning on a molecular pathway that allowed the cells to survive in the presence of the chemotherapy drug (as shown in the second view), and then once the treatment was over, the tumor regrew. While the original and regrown tumors were highly similar to each other, the drug-tolerant tumors were distinct. The researchers are looking at therapeutic strategies to specifically target the drug-tolerant tumors. (Source: Amanda Rinkenbaugh, Ph.D., a postdoctoral research fellow in the Piwnica-Worms laboratory)