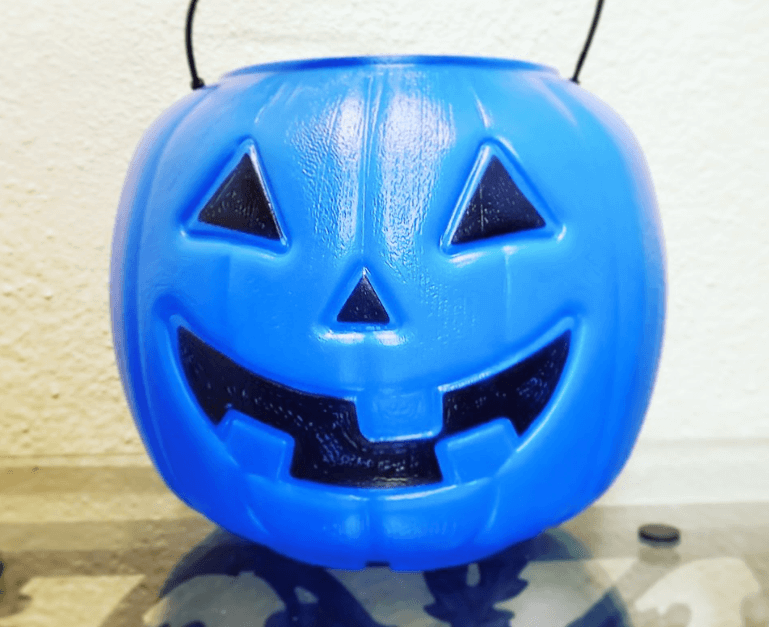 Spooky costumes, parties and decorations build the excitement of Halloween, but the traditions of the holiday—particularly the demand that sweets seekers say “trick-or-treat” for candy and socialize—can cause challenges for people with autism.

Omairis Taylor of Hawaii, whose 3-year-old son is on the spectrum and is not verbal, posted a now-viral plea on her Facebook page this month urging people to be more understanding of trick-or-treaters of all ages and abilities this Halloween.

“Last year houses will wait for him to say TRICK OR TREAT in order for him to get a piece of candy and there I go explaining the situation for the next 5 blocks,” Taylor wrote in the post. “This year we will be trying the BLUE BUCKET to signify he has autism. Please allow him (or anyone with a BLUE BUCKET) to enjoy this day and don’t worry I’ll still say TRICK OR TREAT for him, ill get my mom candy tax later . This holiday is hard enough without any added stress. Thank you in advance.” 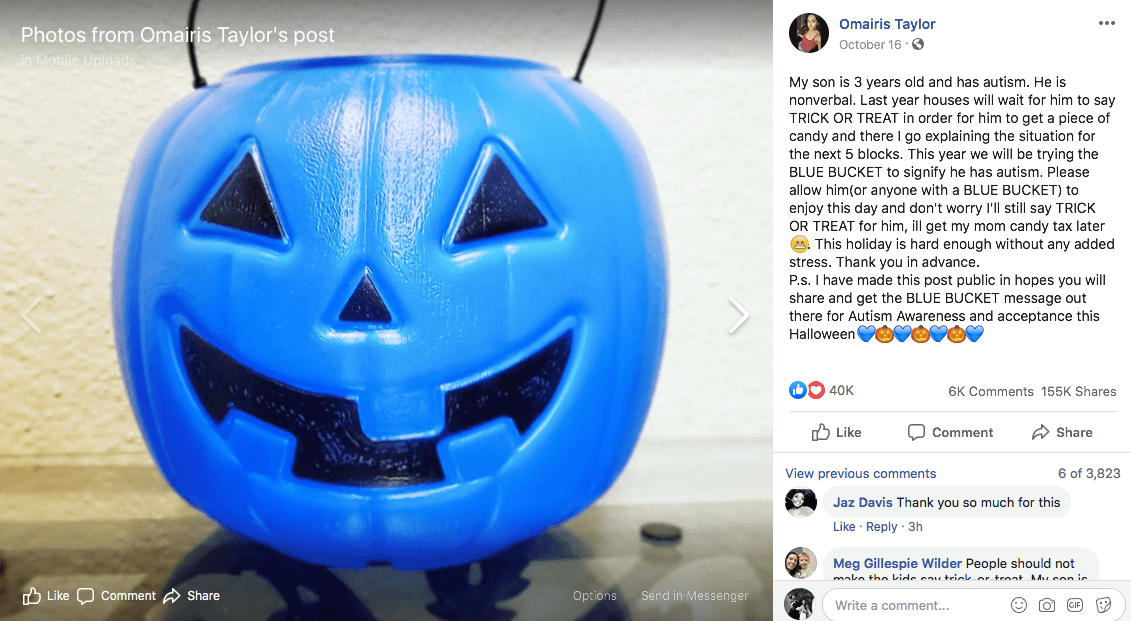 The post has been shared more than 155,000 times. Most Americans have a relative or know someone who has been diagnosed with Autism Spectrum Disorder (ASD). According to the Centers for Disease Control and Prevention (CDC), one in 59 children in the United States has ASD.

“Halloween can be a really challenging time—mainly given some of the deficits related to social skills, verbal and nonverbal communication and repetitive behaviors that many individuals with autism face,” said Rachel Fein, Ph.D., a clinical psychologist at the Autism Center at Texas Children’s Hospital and an assistant professor of pediatric psychology at Baylor College of Medicine.

The imposed expectation for children to participate in traditional Halloween activities like wearing a costume or saying “trick-or-treat” can present major hurdles for celebrants with autism.

“Some children with autism will embrace the full “trick-or-treating” experience and may want to tell you all about their costume choice, while others may only participate in one or two parts such as ringing the doorbell or holding their candy bag up for a treat,” said Lindsay Naeder, senior director of mission delivery at Autism Speaks. “Letting the child take the lead and being accepting and understanding no matter which parts of the experience a child joins in will help make Halloween fun for everyone.”

Both experts said the key to a successful Halloween is to be ready for the experience.

“The biggest recommendation I make to families is to prepare,” Fein said. “This may involve having the child practice wearing their costume at home. … There are some kids with autism that are sensitive to certain textures and feeling confined. Have them practice knocking on a door and saying ‘trick-or-treat.’”

And for those giving out candy this year, Fein cautions everyone about making assumptions.

“There might be children who are nonverbal. There might be older children and you might say, ‘Why is this child trick-or-treating?’ They might seem a little too old to do that, but perhaps it is just something that they really enjoy doing,” Fein said. “Instead of asking children to tell you about their costume or to say trick-or-treat, perhaps instead they could just hand out candy, compliment the costume and make sure if you do ask a question, you give that individual time to process the information because sometimes that can be an issue.”

In addition to using blue buckets for trick-or-treating, individuals with autism can wear badges explaining that they are not verbal or blue stickers to convey that they have autism.

“What’s important is that families do what’s right for them and that no one is ever put in a position where they are asked to disclose a diagnosis if they don’t choose to do so,” Naeder said. “Disclosing for a child is an important decision. If a child is able to be a part of making the decision, then that is also an opportunity to teach a child basic self-advocacy skills in self-disclosure.”

Trick-or-treating with a blue bucket is not an official campaign of Autism Speaks, a leading advocacy organization for people on the spectrum, but health care providers who work with these patients applaud Taylor’s efforts to make the day more enjoyable for all.

“I think this mother’s blue bucket campaign is a fantastic way to bring awareness to autism and I think this mother is an excellent example of being an advocate for her child,” Fein said. “I might add that awareness is the first step, but inclusion is the ultimate goal. I don’t think this should just stop with Halloween as it is only one night per year. I think people are much more likely to be inclusive when they have a personal experience and they see families and their children with autism are just like everybody else. They want to have the same experiences and be included.”