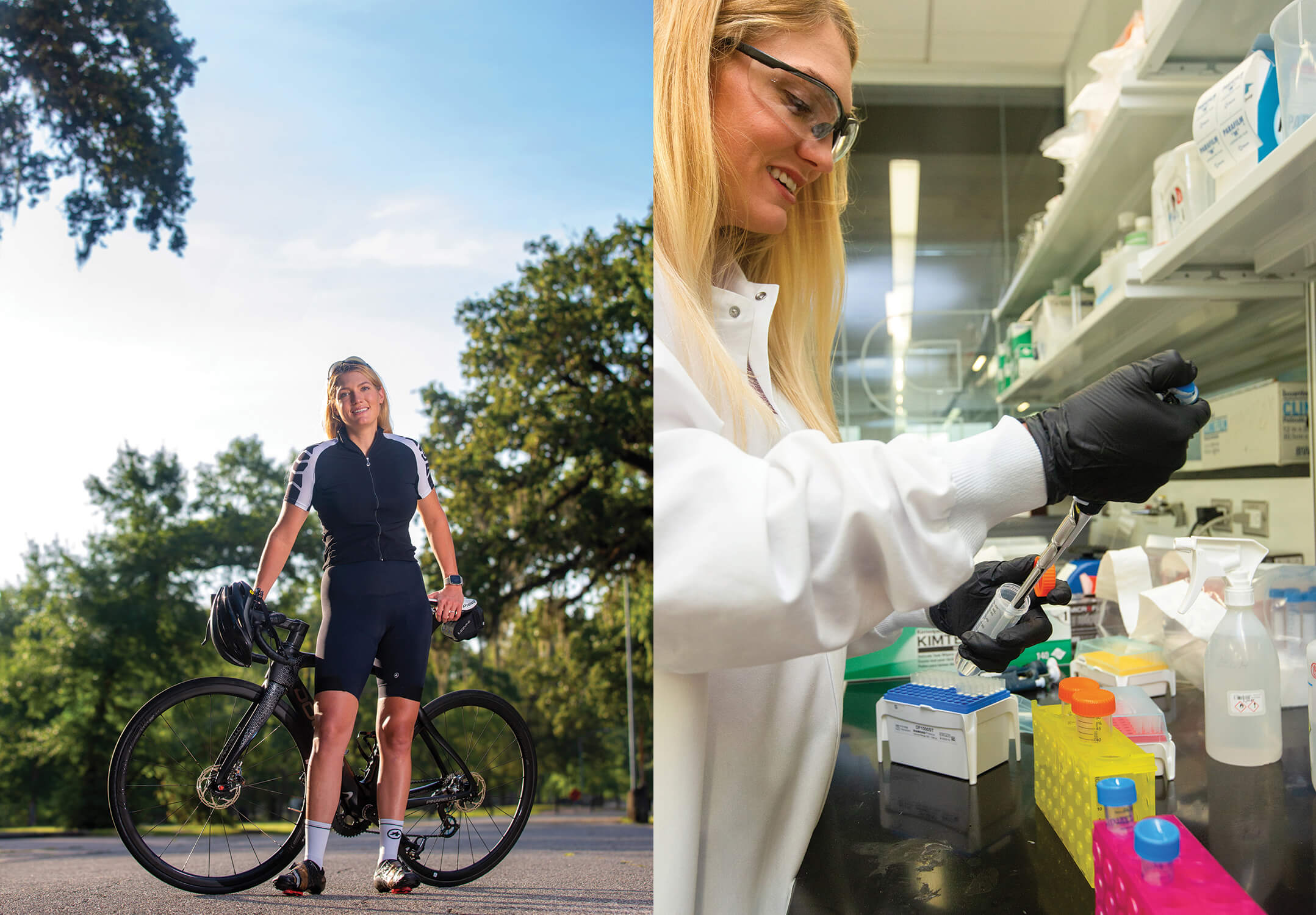 Sinead Miller walked away from competitive cycling after a serious brain injury left her unable to compete on a world-class level.

Motivated by her own trauma, she decided to pursue a career in neuroengineering.

“I wanted to make some impact in the health care space to help people like me,” Miller, 29, said.

After earning a B.S. in chemistry from Marian University and a B.S. in biomedical engineering from Purdue University, Miller began graduate school at Vanderbilt University in 2014. While working on her doctorate, she focused her research on the use of iron core nanoparticles to magnetically extract bacteria from blood.

That research laid the groundwork for her next move—combating sepsis, a life-threatening infection to which the body has an overactive, outsized response. She picked up funding from the Department of Defense to help treat soldiers returning from Iraq and Afghanistan with drug-resistant bacteria. 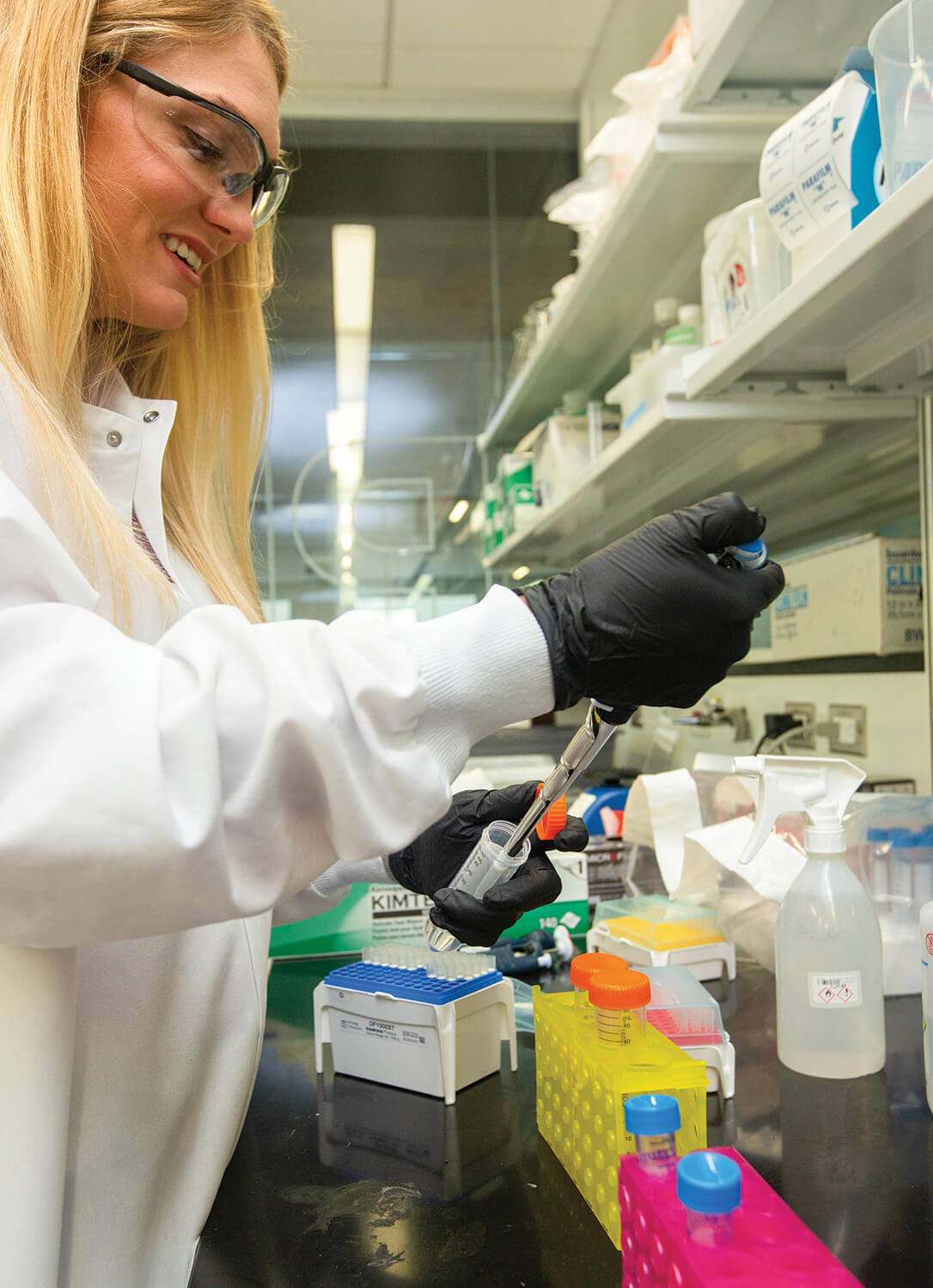 Sinead Miller, Ph.D., works in her lab at JLABS @ TMC, where she and her company, PATH EX, have been located since joining the TMCx medical device 2019 cohort.

At least 1.7 million American adults are affected by a sepsis infection each year, resulting in nearly 270,000 deaths, according to the Centers for Disease Control and Prevention. One in three hospital deaths are due to sepsis.

“It’s the biggest killer in our hospitals right now,” Miller said. “I had this idea for a device that doesn’t use nanoparticles but uses kind of a similar technique to bind bacteria and pull them out of blood. I used the knowledge that I had to fabricate this device that was for cleaning blood, pulling bacteria out. And it worked.”

Miller’s device, which fits in the palm of a hand, can diagnose bacterial infection in the blood by capturing and removing pathogens and their associated toxins. The device takes a five-milliliter blood sample from a patient suspected of having sepsis or a bacterial infection, separates the bacteria from the clean blood and allows doctors to immediately test the bacteria.

In addition, PATH EX has developed a therapeutic device to treat infected patients. Similar to a hemodialysis machine, the device circulates the patient’s blood continuously, captures the bacteria and associated toxins and flows the clean blood back into the patient.

Creating a medical device and taking it to market is a process not for the faint-hearted. Miller knows it’s a journey as arduous as it is rewarding. She’s been down a similar road before.

Born to ride
At the age of 3, Miller could be found on her bike, pedaling around the race track while her father, former superbike racer Rex Miller, was competing. Her mom waited on the sidelines, ready in case her father needed a tune-up.

Even as a young child, Miller’s focus and ability to visualize a far-off goal was apparent. She entered her first BMX racing competition when she was only 4 years old. Boys dominated the BMX scene back then, and being a girl in a sport that was very much a boy’s club made competing impossible. There weren’t any girls to race.

“I was a tomboy growing up and I always wanted to play with boys. I always would ride at the BMX track with boys, my friends were boys and, naturally, I wanted to race boys, too. There were rules in BMX at the time where you couldn’t,” she said.

Miller was determined to train with the boys in order to reach the top of her game, so her parents took her to races in different states, tucked her long blonde hair under her bike helmet and told people she was a boy.

“No one knew us. We’d just hide that I was a girl, put my hair up under my helmet, send me out, race the boys and then come back into the van and leave. But that’s what we had to do so that I could race and improve.” 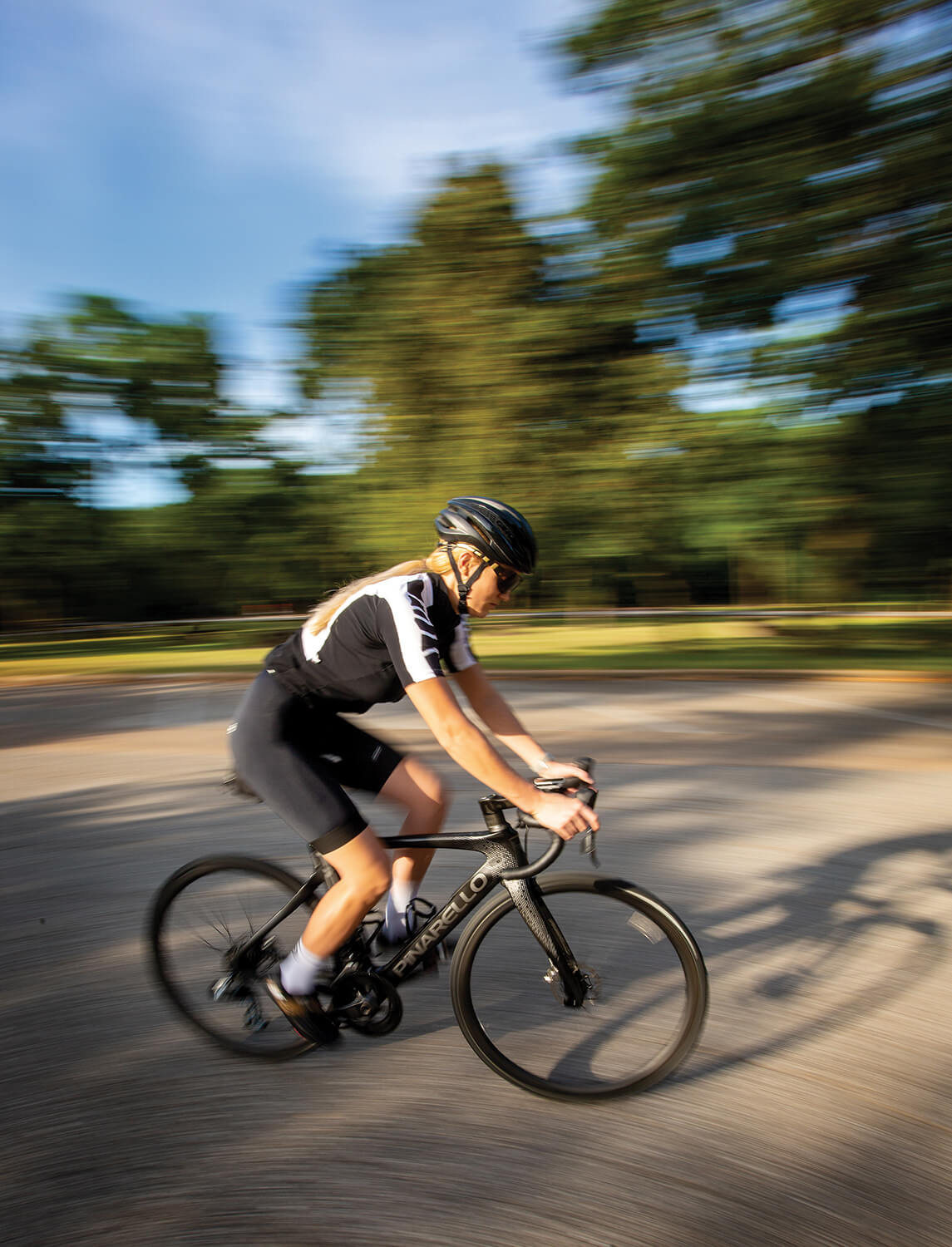 As a sophomore at South Park High School in her hometown of Pittsburgh, she earned a national level in BMX and turned pro at the age of 15. But she later retired from her BMX racing career to focus on her true passion: road cycling.

“It would seem BMX and road cycling are really similar to a lot of outsiders because they’re both bicycles,” Miller said. “If you think of, say, running, for example, you can’t be the best sprinter and the best marathon runner. It’s totally different. The same goes for cycling. BMXers are your pure sprinters.”

Miller had her sights set for the long haul and seemed destined for cycling greatness.

Full speed ahead
While attending Marian University in Indiana on a full cycling scholarship, Miller joined the U.S. National Team at 18 and represented the country in races around the world— including Italy, France, Poland, South Africa and Belgium—with each race propelling her toward a spot in the 2012 Olympic Games.

But on Sept. 1, 2010, as Miller sped down the course near the end of the second stage of the three-day Ladies Tour of Holland (now known as the Boels Rental Ladies Tour), her dreams came to a crashing halt.

To this day, Miller doesn’t remember careening into a parked car at 30 miles an hour. She doesn’t even remember starting the race.

The crash happened so quickly that Miller didn’t have time to stretch out her hands to brace her fall after she was catapulted from her bike. All the impact went to her face, shattering her front teeth, nose and jaw. In addition, she fractured her C3 and C5 vertebrae and suffered a traumatic brain injury.

“Once you’re like that, you’re in that state of just fogginess,” she said. “You literally get double vision. You’re bound to make a mistake, so you just don’t want to be in that situation. You can’t really race at a world-class level if you’re not at 100 percent capacity.”

Balance is key
Wieseler, who spends a lot of time in the lab with Miller, appreciates how her business partner has transferred the focus and discipline she honed during her cycling career to her life as an entrepreneur.

“It’s not just about the time you’re riding, but how you eat, how you sleep, everything all the other times,” Wieseler said. “That’s very similar to a startup. We’re very busy and we spend a lot of time working, but it really encompasses your whole life. She took that from cycling and moved that into what we’re doing now— just the drive she has to complete this mission of hers to see this through to where it can make a difference and help people.”

Miller also makes sure to take care of herself. By all appearances, she looks like she has recovered from her cycling crash, but “recovery is a strong word,” she said.

Her brain hasn’t fully healed. She suffers from debilitating migraines, drowsiness and fatigue.

“I wouldn’t even say that I’m recovered,” Miller said. “I still don’t feel normal. It took me two years to get to a point where I could function like a normal person, where I didn’t really slur my words and I could go do normal things like go out to dinner and things like that.”

Miller manages her post-concussive symptoms by planning her days to minimize anything that might trigger a migraine. If she knows she’ll be spending a lot of time in the lab, she’ll make sure not to schedule meetings in the afternoon. She doesn’t cycle for more than two hours to prevent a migraine that could last two to three days.

Miller’s head trauma is an ongoing battle, but that hasn’t stopped her.

“I see the resilience,” Wieseler said. “I can’t imagine having headaches or migraines most of the day, so the fact that I don’t see it is the biggest sign. She does a really good job of pushing through whatever she’s going through.”

As Miller reflects on her accomplishments as an elite cyclist and goals as an entrepreneur, she realizes that balance is key.

“With cycling, I got to the point, I think, where everything I did revolved around it. It didn’t matter what else was going on. If it was Christmas Day, it didn’t matter, I’m still going to train,” she said. “I don’t think that was necessarily the best way to live. … I try to use that now with the startup company. It’s really time-consuming, but there’s always ways to balance things in terms of time.”