Repairing faulty electricity in the heart with conductive thread

Repairing faulty electricity in the heart with conductive thread 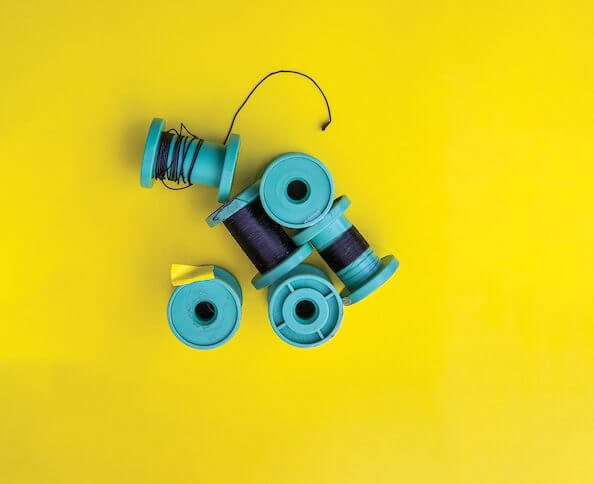 Have you ever been in a place where the lights flicker and threaten to go out, thanks to faulty electricity? Now imagine that place is your body.

Electrical impulses set the rhythm and rate of your heartbeat. The sparks start in a cluster of cells in the right atrium and then spread through the upper chambers of the heart, forcing them to contract and push blood into the ventricles.

When these electrical signals go haywire, though, the heart’s ability to pump oxygen-rich blood from the ventricles out to the body is jeopardized. A heart that beats too quickly, too slowly or erratically can be life-threatening.

But what if there was a new way to repair the heart’s electrical system? What if surgeons could sew a current directly into the soft tissue?

Most ventricular arrhythmias—the umbrella term for abnormal heartbeats—occur in hearts that contain scar tissue from previous heart attacks, heart surgery or diseased heart muscle. Why? Because scar tissue does not conduct electricity.

Typically, surgeons defibrillate the heart—send it a controlled electrical shock—to reset the electrical system, and then implant a pacemaker or defibrillator to maintain it. But a new material, developed and tested in the Texas Medical Center, might be able to repair the heart’s electrical current in a more efficient way.

A highly conductive thread made from carbon nanotube fibers could build a bridge over or through soft scar tissue. In essence, surgeons would stitch an electrical bridge in the heart. 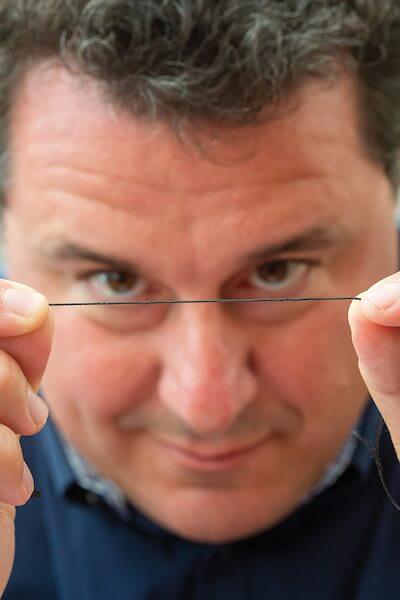 “There are two steps to making this material,” said Rice University chemical and biomolecular engineer, Matteo Pasquali, Ph.D., who led a team of scientists from Rice, the Netherlands, Israel and the U.S. Air Force that perfected the conductive thread in 2013. “The first step is turning gaseous hydrocarbons into carbon nanotubes, which are produced in powder form. The next step turns the powder into a fiber.”

The thread itself is made of “lots and lots of tiny cylinders that are only about one to two nanometers in diameter, so each one of those cylinders is 10,000 to 100,000 times smaller than a human hair,” Pasquali explained, fiddling with a spool of the extremely ordinary-looking thread in his office.

“He played with it and kept thinking that it handles like thread, but he knew it was conductive,” Pasquali said. “Suture thread is not conductive. We started thinking about what we could do with it since we now have something conductive, soft and flexible.” 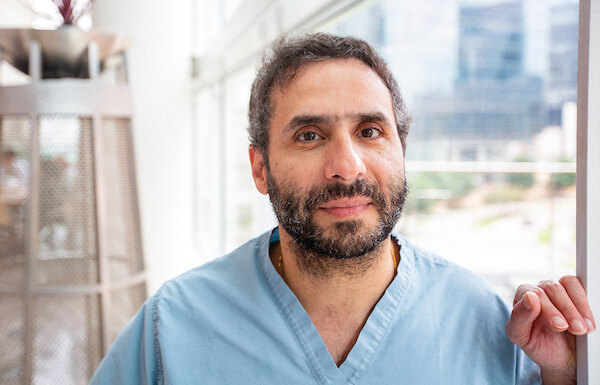 Mehdi Razavi, M.D., is a cardiologist and Director of Electrophysiology Clinical Research and Innovations at Texas Heart Institute.

For Razavi, Director of Electrophysiology Clinical Research and Innovations at THI, the material seemed like a perfect fit for a busy organ with continuous complex motion. He thought the thread could be particularly useful to treat the most serious type of arrhythmia, ventricular fibrillation (VF), which occurs when chaotic electrical activity causes the lower chambers of the heart to quiver (or fibrillate), rather than beat.

“At the beach, if you are standing waist-high in the water and a wave hits you, what happens?” Razavi asked. “The wave breaks. And if you look around your tummy, you’re going to see little eddy currents. Now, if you’re the scar and the heartbeat is coming and it hits an area where it can’t go through, the heartbeat wave can create an eddy current. When an eddy current
happens in the bottom chamber of the heart, it’s called ventricular fibrillation. VF is why someone is talking to you one minute and then they drop dead the next.”

But carbon nanotube fibers allow the wave to go straight through you, with no eddy currents, he said, completing the metaphor.

“That’s how fundamental this correction of conduction velocity is,” Razavi said. “These fibers maintain the electrical current. They can become a bridge, over or through scar tissue, to maintain the current without delay.”

There’s one question Razavi keeps getting asked by heart surgeons. “The question everyone has is: You’re putting some-thing that’s superconductive through scar tissue? Why now? Anyone can do that with a piece of silver or silver rod,” Razavi said. “That’s true, but the problem is, on the average, the heart beats 115,000 times a day. That’s a lot—and it’s not squeezing. It’s a torsion, where it’s getting closer from the tip to the base, so it’s squeezing and rotating.” No metal would be able to keep up with those rapid and frequent torsions, Razavi said. No metal would be able to survive that environment. Until now.

Razavi and Pasquali led a study of the conductive thread in large preclinical models. Results were published in the American Heart Association’s journal, Circulation: Arrhythmia and Electrophysiology. Experiments showed the nontoxic, polymer-coated fibers, whose ends were stripped to serve as electrodes, were effective in restoring function, whether the initial conduction was slowed, severed or blocked. In addition, the thread functioned with or without the presence of a pacemaker.

On the down side, nanoparticles always carry with them the potential for toxicity.

“In our study, we had this suture in models for as long as three months and there was no evidence of toxicity,” Razavi explained. “There is a concern, though, about an inherent hazard in nanoparticles. But the studies that have been done with nanoparticles in the past are using dust-like particles that are in the same vicinity of size as, say, asbestos. It’s not that asbestos itself is poisonous. What happens is, when you breathe it, it provides a constant irritant for cells, so cells are reproducing, growing, trying to create an inflammatory response. Any time you have a lot of cells reproducing, one of them can be a black sheep and that black sheep can turn into cancer. But we didn’t find any problems with toxicity in any of the clinical studies and we weren’t expecting to.”

Carbon nanotubes are a young technology, not to be confused with carbon fibers.

Carbon fibers—stiff, brittle, lightweight and five times stronger than steel—can be found in bicycle frames, softball bats, hockey sticks, golf clubs, tennis rackets and other items that need to be strong but not heavy.

Carbon nanotube fibers differ from carbon fibers in that they are electrically conductive and they are also extremely flexible.

Some questions must be answered before the conductive thread can be used in humans, though, including how long and how wide the fibers should be and how they would perform in the growing hearts of young patients.

Best-case scenario, the thread could be used in human patients in three years, Razavi estimated, adding that the applications are seemingly limitless. In addition to mend-ing damaged hearts, carbon nanotube fibers are being studied for use in cochlear implants, electrical interfaces with the brain and for various applications in the automotive and aerospace industries.

“Every time a cardiac surgeon opens you up and cuts, they have to suture,” Razavi said. “If that suturing is done on cardiac tissue, that’s a scar that blocks the conduction impulse. So if the chest is open and they have to close it with a suture anyway, why not use this thread as a preemptive strike? All you have to do is put this in the hand of the surgeon. The suture already needs to be done.”