Keeping the faith despite brain cancer

Keeping the faith despite brain cancer 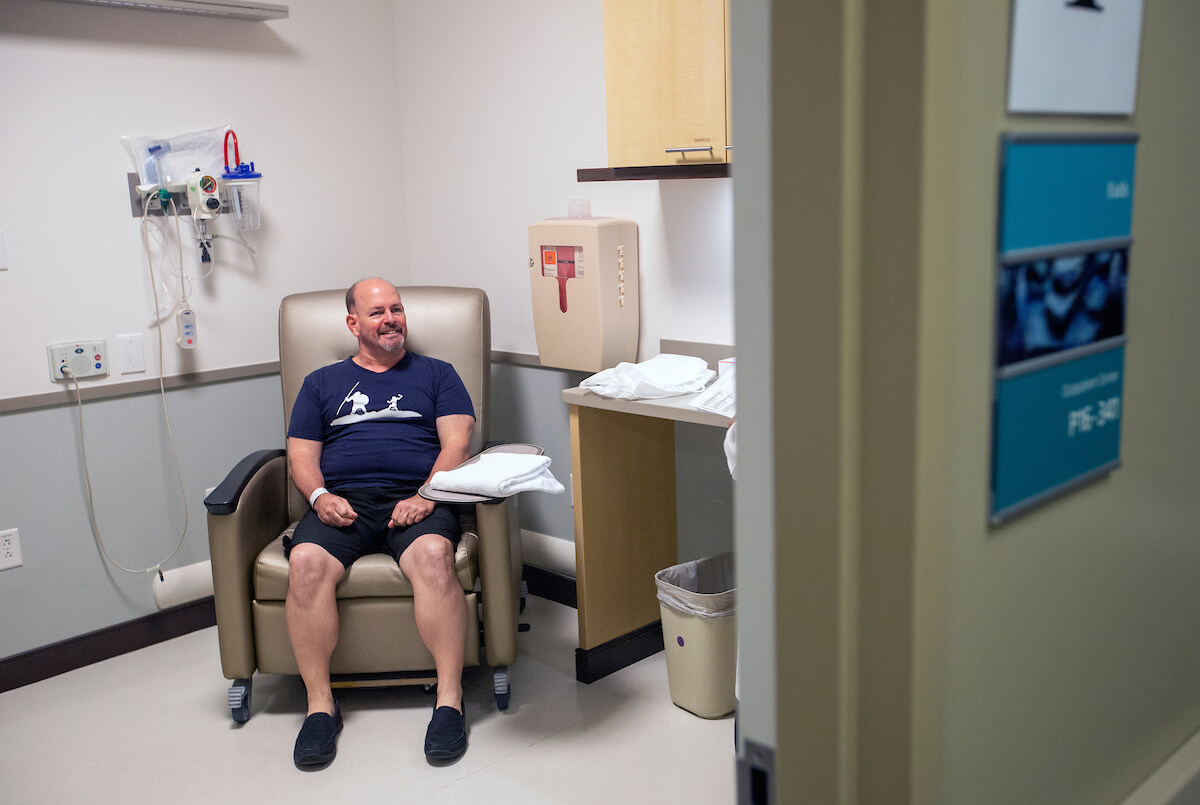 In 2017, Ed McCumber’s headaches were becoming more severe and more frequent. He was constantly nauseated. Spots clouded his vision and the distinct smell of nail polish remover filled his nose.

Befuddled by what was causing these symptoms, he finally went to see his doctor in Myrtle Beach, South Carolina, for a suspected sinus infection triggered by allergies. But, what he thought would be a routine visit turned into an unexpected stay at the hospital.

After running several tests and a biopsy of his brain, Ed McCumber’s doctors diagnosed him with Stage IV glioblastoma, a rare, highly aggressive and malignant brain tumor. According the American Cancer Society, an estimated 23,820 brain and nervous system cancer will be diagnosed in the United States this year. Glioblastomas account for about half  of those new cases.

It’s the type of news that would throw a family for a loop, but Ed McCumber and his wife, Terri, leaned on their faith.

“We never got scared. We never got angry. We felt like a peace from the Lord for some reason … that everything was going to be okay,” said Ed McCumber, 54. “Looking back now, it kind of feels like, ‘Wow, why didn’t we freak out?’ That would have been a normal reaction.”

The couple scoured the internet in search of treatment options across the country.

One day, as Terri McCumber was scrolling through Facebook on her phone, she came across a video from Houston Methodist Hospital. She had seen it once before. This time, she paused for a moment and watched Matthew Futer, a then-10-year glioblastoma survivor, talk abut treatment from neurosurgeon David Baskin, M.D., director of the Houston Methodist Kenneth R. Peak Brain & Pituitary Tumor Treatment Center. Futer was treated with an innovative gene therapy drug that used a unique combination of the herpes virus and the common cold virus to kill the tumor.

The video was an answer to their prayers, but Ed McCumber initially scoffed at the idea of coming to Texas because the plan seemed too lofty. He resigned himself to staying local in Myrtle Beach for treatment, but a few days after seeing the video, a serendipitous encounter changed his mind.

The McCumbers were in church after his diagnosis when a woman walked up to them. She told them that she had been praying that day and needed to deliver a message to them: “The Lord told me that you need to go to Texas,” the woman said.

“She didn’t know we were talking about going to Texas,” Terri McCumber said. “I was shocked. You never expect that somebody is going to come up and tell you that after you had just seen this video. Then we’re thinking: ‘That’s where we need to be.’”

The McCumbers called Baskin’s office to set up an appointment. They were initially told that Baskin didn’t have any openings for weeks, but a nurse called again after a last-minute cancellation and said the slot was theirs if they could be in Houston in three days.

“Ed was released that Friday. We were in Houston on Monday and in Dr. Baskin’s office that Tuesday,” Terri McCumber recalled.

Traditionally, glioblastomas are treated with surgery followed by radiation and chemotherapy, but even then, the outcome is bleak.

“The median survival is only 15 months, and about half of that is pretty miserable existence,” Baskin said. “It’s really a death sentence.”

Unfortunately, glioblastomas also have a high recurrence rate. Even after surgery, the tumor can grow back as quickly as two months. More than 90 percent of patients will have a regrowth of the tumor, according to one study.

In an attempt to develop a novel approach to treating glioblastomas, Baskin and his team genetically engineered a cold virus called adenovirus and inserted a small piece of DNA from a herpes virus.

The first step required Baskin and his team to surgically remove as much of the tumor as possible without damaging the brain.

“These tumors are like an octopus. They have a head and they have tentacles that extend long distances throughout most of the brain,” Baskin said. “The brain is very specialized. You can’t chase these fingers without producing horrible neurological deficits. Even if you do, the tumor is pretty much spread through the brain.”

Once most of the tumor is removed, Baskin injects the remaining tumor with the cold virus injected with herpes DNA. Because the adenovirus is highly infectious, it is able to spread throughout tumor and into hard-to-reach tendrils. Patients then take a pill for 14 days called Valtrex, an antiviral drug used to treat herpes.

“We designed the virus so that it would be very inflammatory and very immunogenic,” Baskin explained. “In other words, it induces an immune response as the tumor dies.”

Valtrex, the first punch, targets the herpes DNA inside the adenovirus and kills the cells. As those cells die, the immune system delivers the second punch by creating millions of antibodies against the tumor and triggering a vaccine effect that lasts for months to years. This process is called gene-mediated cytotoxic immunotherapy or GMCI.

Harnessing the power of viruses to treat cancer is not new. This area of research has been of interest to medical researchers for years.

Across the Texas Medical Center, Frederick Lang, M.D., professor and chair of the department of neurosurgery at The University of Texas MD Anderson Cancer Center, is leading a similar clinical trial in which he uses the adenovirus and herpes virus to treat glioblastomas.

Currently, there is only one injectable drug approved by the U.S. Food and Drug Administration. In 2015, Amgen Inc. received the green light from the FDA for its drug that uses the herpes virus to treat melanoma.

Earlier this year, researchers from the University of Surrey published a study in which they used the common cold virus to treat bladder cancer.

It showed such promise in many of his patients that Baskin decided to launch a second clinical trial this year.

“You could punch a hole in the tumor and you can make a difference in their survival,” Baskin said. “But eventually the tumor grew back. We felt like that the dose wasn’t high enough.”

Ed McCumber’s tumor grew back within five weeks after his first surgery and again after his second surgery. Four weeks later, he underwent his third surgery—this time as part of Baskin’s clinical trial—in hopes that this would be the last time.

In December 2017, Baskin removed the 4-by-5.5-centimeter tumor and injected 20 doses of the cold virus with herpes DNA cocktail into the remaining tumor. That same week, Ed started on his regimen of 30 radiation treatments and 42 rounds of chemotherapy.

Before coming to Texas, local doctors said the tumor was too aggressive and that the next step was hospice care, but the McCumbers held to their faith and followed the signs that led them to Houston.

“We just felt like the Lord had really directed us there,” Ed McCumber said. “Things just fell into place to make it happen.”

“When you say ‘in sickness and in health’—when you take your vows—you just hang on to that,” Terri McCumber added. “We’ve had a lot of faith in Jesus. [Our faith] has just made us stronger and watching what our Lord did for us through this has strengthened our marriage even more.”