A new procedure leaves no incision or scar on the neck

Toward the end of 2018, Tracy Faustermann began experiencing a host of unusual symptoms.

Her blood pressure was skyrocketing, she had terrible heartburn and her bones were weakening. “I thought I was just getting old,” Faustermann, 35, said. “It’s just life. I guess I got bad genes.”

One day, her stomach issues worsened to the point where she needed to see a doctor. Her primary care physician initially suspected that her condition might be due to diverticulitis, inflammation or an infection along the wall of the intestines. Her test results came back normal, but her calcium levels were abnormally high.

After running more tests, Faustermann’s doctor discovered her high calcium levels, called hypercalcemia, were due to overactive parathyroid glands secreting an excess of parathyroid hormone, which regulates calcium in the blood.

“My doctor said, ‘We’re just going to watch this for a few years.’ But at this point, I had been reading the most recent research on hyperparathyroidism,” recalled Faustermann, a technical specialist at Corning Life Sciences. “I said, ‘You know what? That’s not a good enough answer for me.” 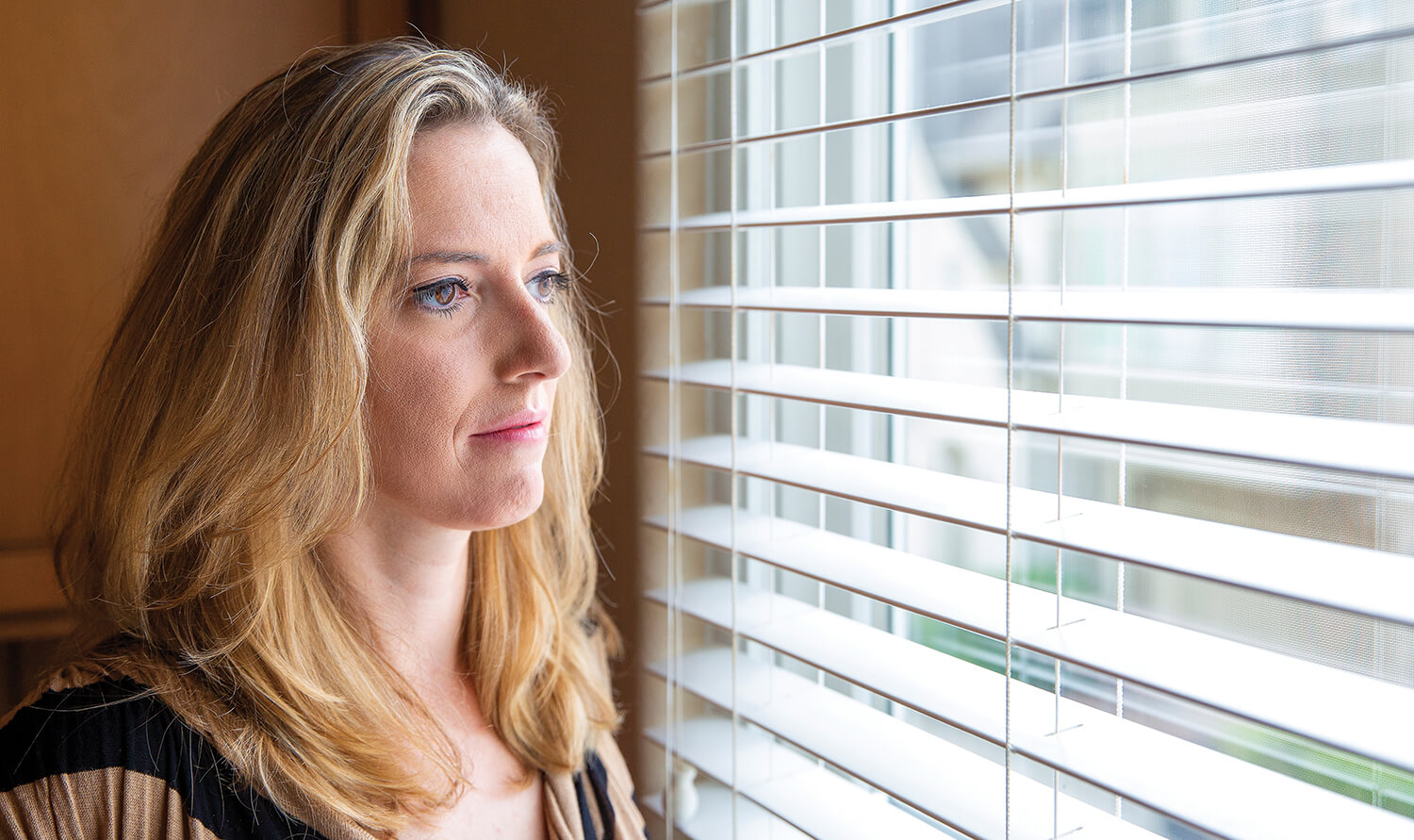 Tracy Faustermann underwent a scarless surgery to have her thyroid glands removed in 2018.

In search of a more aggressive course of action, Faustermann found an endocrinologist who diagnosed her with severe hyperparathyroidism. The only treatment was to surgically remove the affected parathyroid glands. Being a meticulous researcher, Faustermann scoured the internet and scientific literature to better understand her condition and her options for minimally invasive surgical treatments.

“I had read a bunch of horror stories. If [doctors are] not specialized in that area, don’t do it,” she said. “There were only two doctors in the area I would let touch me.”

One of the doctors was Raymon Grogan, M.D., associate professor of surgery at Baylor College of Medicine and section chief of endocrine surgery at Baylor St. Luke’s Medical Center. Grogan is one of a small cadre of experts in the country who perform a novel, innovative surgical technique called transoral endocrine surgery, which avoids scarring on the neck. Currently, Baylor St. Luke’s is the only center in Texas where this procedure is performed.

Typically, surgeons make an incision in the neck to remove the thyroid or parathyroid glands, leaving behind a visible scar. Although less apparent, other surgical techniques—such as those that remove the glands through the armpit or areola—still scar.

However, using the transoral endocrine surgical technique, Grogan makes three small incisions—ranging from 3 to 10 millimeters wide—inside of the bottom lip to create three ports. He can then snake a laparoscope down the center port, and retracting and cautery tools down each side port.

Once the glands are laparoscopically removed, Grogan stitches up the incisions. On average, parathyroid removal takes an hour to perform— two hours for a thyroid lobectomy and three hours for a total thyroidectomy.

After two weeks of healing and reduced swelling, there’s virtually no visible sign of surgery.

“Someone passing you on the street, even maybe your relatives, wouldn’t even know you had surgery,” Grogan said.

Currently, there is no data to indicate that this approach is more advantageous than the traditional surgical method beyond cosmetics.

But value in medicine, Grogan said, is multi-dimensional. There is monetary value (Could this technique help reduce costs?) and clinical value (Will this technique reduce risks and complications and improve outcomes?). However, there’s also patient-centered value. This is where the real benefit of the operation lies.

“People don’t look into the deeper understanding of what that cosmetic value actually is for patients. They just say, ‘They have a scar on the neck. So what? What’s the big deal?’ … I think that’s a wrong way of looking at it,” Grogan said. “The truth of the matter is it’s a scar on the front of the neck. It can never be hidden. It will always be there. That’s more than not wanting that scar. There is more than just vanity. … It’s a constant reminder that you had surgery. If it was for cancer, then it’s a constant reminder that you had cancer.”

On Dec. 13, 2018, Grogan removed Faustermann’s parathyroid glands. Not having a visible scar was a major selling point for Faustermann.

“Being on the business and sales side, I don’t want to have attention drawn to me,” she said. “If someone has a scar on their neck, it’s really obvious. People stare. It wouldn’t have been that big of a deal or been the end of the world, … but I really like that I don’t have to have the scar.”

Although Faustermann still has some temporary numbness in her mouth, she said she feels “a lot better than I did before I had the surgery.” She no longer suffers from heartburn and has stopped taking blood pressure medicine.

“If I have another enlarged parathyroid at some point in life, we could do it again if we had to, and I would do it again,” Faustermann said. “If you have to have surgery, it was the best experience.”

Grogan is collecting data to support transoral endocrine surgery as a valuable surgical option. Thus far, preliminarily findings show that, besides the cosmetic benefit, there is a reduced risk of injury to the parathyroid, which is one of the possible complications of surgery on the thyroid, but more safety and efficacy data will be needed before this technique becomes mainstream.

“Upwards of 140,000 people per year in the United States could have this operation, so even the smallest benefit to a single patient when you start extrapolating it out to hundreds of thousands of people per year adds up to a very large benefit on a societal level,” Grogan said. “That also shouldn’t be ignored or be minimized.”