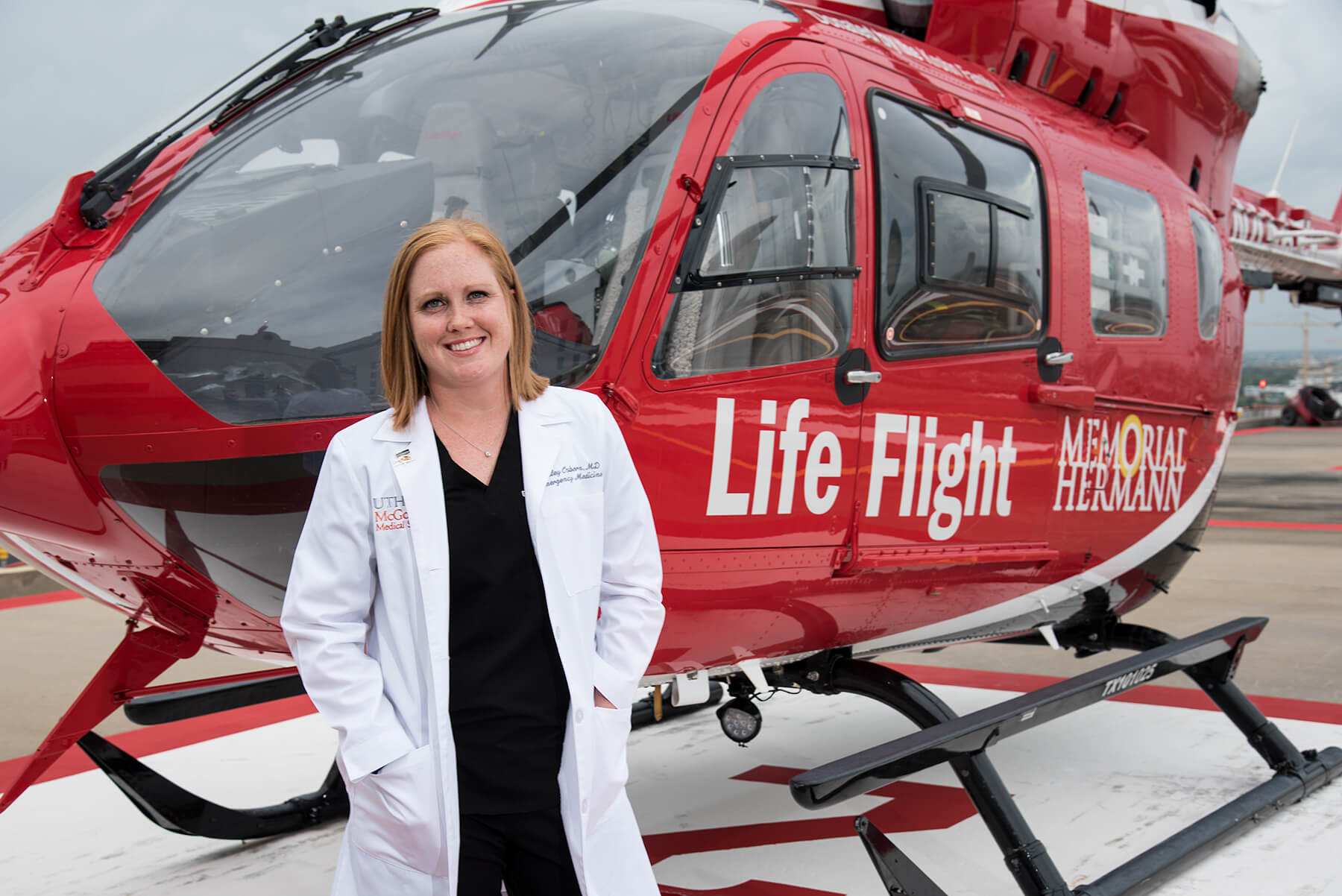 Q | You’re the third person to helm Life Flight, following founding medical director James “Red” Duke, M.D., and, most recently, Joseph Love, D.O. What’s the legacy of that leadership?
A | Dr. Duke obviously has left a legacy that will last for a long time. I think that’s probably something that we want to make sure that we emulate and continue to push forward. I didn’t get to meet Dr. Duke, which is unfortunate. I interviewed here about a week or two after he passed away, but it’s obvious to me the team here continues to work in the same manner that he initially set forth.

My impression of Dr. Duke from reading about him and talking to everyone here is that he started the program in the 1970s with the intent to take the same skill level and level of resuscitation that’s expected in the emergency department and in the operating room to the site of injury—at the site of the patient.

Q | How has that legacy shaped the expansion of Life Flight since its inception in 1976?
A | We definitely still have the same motivation—the same purpose—and I think we’d be remiss not to continue to push forward with his same vision. Obviously, this vision has expanded since Dr. Duke created the program. We no longer just care for trauma patients. We care for patients across the spectrum. We do a lot of inter-facility transfer, a lot of specialty care patients, including balloon pumps and ECMO [extracorporeal membrane oxygenation, which replaces heart and lung function] devices.

We do pediatric patients and obstetric patients, as well. His vision has truly expanded exponentially. I think that he would be proud of the care that these crews are providing today. In my opinion, though biased, I think they are probably providing the highest level of pre-hospital care available in the country.

Q | What is it like working with the Life Flight team?
A | It’s almost unbelievable to be able to be in this position and to work with these crews on a daily basis. I had a friend asked me [the other day]: Does every single paramedic and flight nurse that you work with do a great job? I said, Absolutely, every single time. We can’t afford to have a bad day. I don’t think that we ever do. I participated in a patient they transported yesterday at another agency north of town. It’s humbling every time I watch them work and watch them resuscitate patients. They’re just a truly skilled set of providers and that is difficult to come by.

There’s no one else who does what these flight nurses and paramedics and our ground crews do. I get to work in the ER where I receive patients that are nicely packaged and have IVs and that have already started resuscitation. To start that care in an upturned vehicle or to start that care with that patient stuck in a device at a factory or laying on the side of the road after being hit by a car, it’s a totally different level of intimacy with the patient and the rapport you have to develop with them, very quickly, and with their family members.

I did my fellowship here at UT. That’s what brought me to Houston. I did the fellowship here at the University of Texas in association with the Houston Fire Department. During residency is when I got back into EMS. I served as the assistant medical director for the Richland County Sheriff’s Office tactical medical program. I served the sheriff’s office and went through and became a reserve deputy there.

Q | You’re also a captain in the medical corps of the U.S. Air Force and Air National Guard. Tell me about your military service.
A | I commissioned and entered the Air Force in March 2018. Life Flight was nice enough to host the commissioning. We did that on the helipad here. I’m brand new to the military; been serving for a year and a half. I serve at a National Guard base in South Carolina, which is where I grew up. I travel back once a month and do training with them.

I’m in a flight surgeon role, so I’m finishing that training so that I can be useful to them in the near future. It’s exciting. I’m busy, but I enjoy being busy. This work is stuff that I love, so I can’t say that it’s anything but fantastic right now.

Q | What about flight medicine is the most exciting to you?
A | A couple of things are contagious. Obviously, flying itself is exhilarating in getting to see the city you live in from above. Coming in and hearing a patient report over the headset and landing on an interstate or landing at a hospital knowing that they have called you as the flight crew to come in and provide care that’s not able to be provided there.

Whether it’s an agency that’s calling them or another hospital, it’s exhilarating knowing that you’re able to come in and bring a set of skills and, potentially, resources that they don’t have—and hopefully make a difference in that patient’s life. I think that’s probably the most exhilarating part. It is fun to fly and it is interesting to learn how to take care of a patient in such a small environment. I think they do an impressive job of that.