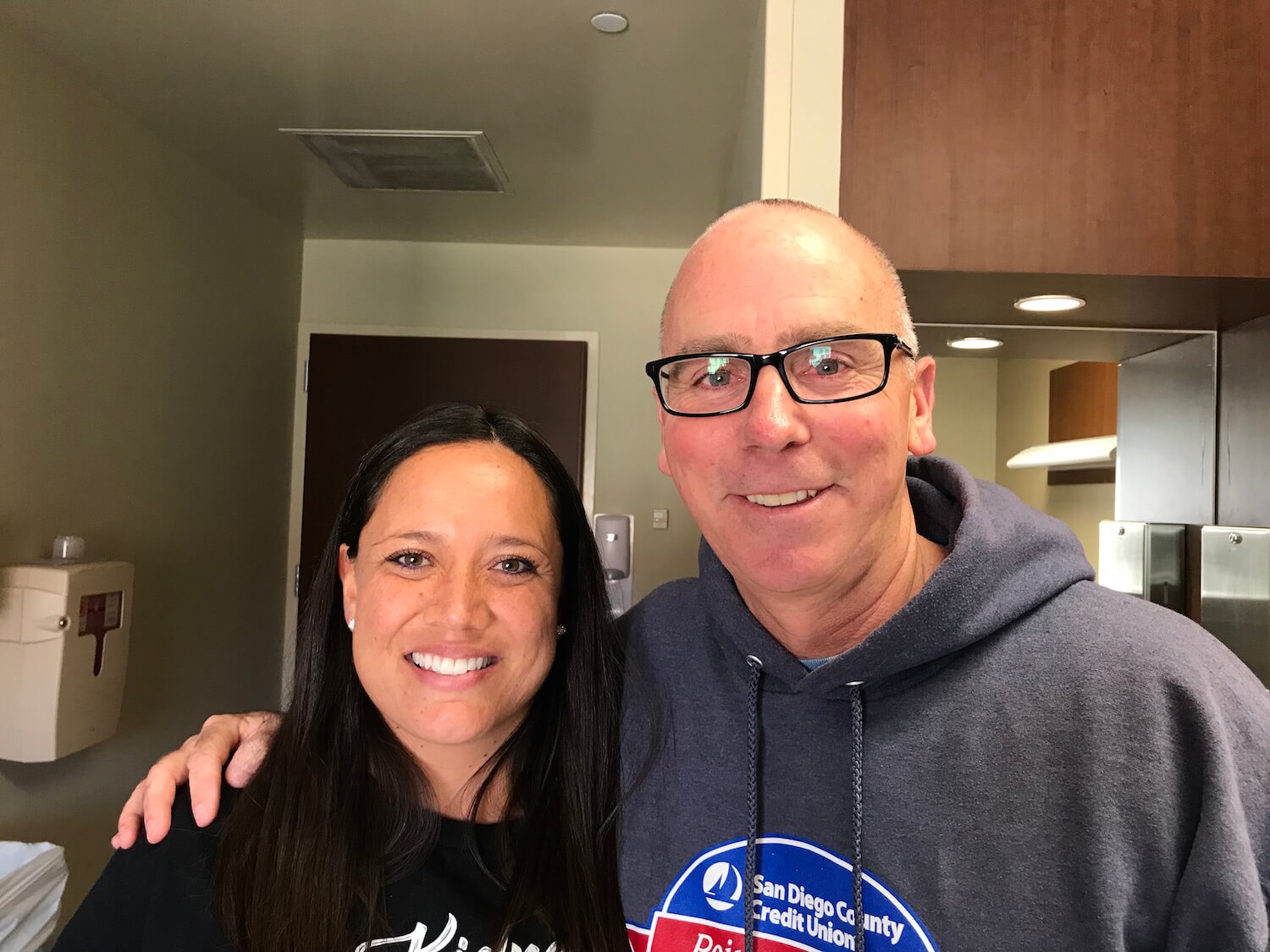 Last year, Holiday Bowl CEO Mark Neville took a break from a busy day and began scrolling through Facebook. Suddenly, he stopped: One of his contacts had posted a call for help for a young woman named Tasha Herrera.

Herrera, now living in Houston, had been Neville’s family’s babysitter in San Diego for more than a decade. According to Facebook, she was in kidney failure and needed a transplant to survive.

Even more surprising to Neville: The post said a living person could offer one of their kidneys if they were a biological match.

“I didn’t even know that this was something people could do,” Neville said, recalling that day.

So, Neville, who had donated bone marrow to a boy in California 15 years prior, clicked the link to get tested. The odds were unlikely, he thought, but he had try.

“Tasha is a pretty special person and someone that my family and I have always admired,” he said. “She played a big part in our family, so I never really thought of this as even being a decision to make.”

Herrera was first diagnosed with kidney failure in 2009. Her doctors in California worked for months to stabilize both kidneys—which are critical for removing waste and extra fluid from the body—and to run diagnostic tests to understand why, at such a young age, they were shutting down. According to Herrera, now 36, her physicians finally determined that it was likely caused by long-term, daily use of ibuprofen.

For nearly a decade, Herrera and her doctors—first in California and later in Houston—were able to keep her kidneys functioning between 34 and 36 percent. But in 2017, the organs began deteriorating again. Herrera was told that when they hit 20 percent functioning, she automatically would be placed on the transplant list.

“I was doing everything they asked me to do because I didn’t want dialysis. It was one of my biggest fears—recognizing that I needed a machine to stay alive,” Herrera said.

A few months later, a blood test determined that her kidneys were working at 18 percent. Herrera broke down in tears. By June 2018, she had a catheter inserted and began dialysis three days a week for eight hours a day. It was exhausting and “depressing,” she said.

The next step was even harder. Herrera remembers asking her care team: How does one even ask for an organ?

According to the United Network for Organ Sharing (UNOS), 21,167 kidneys were transplanted in 2018 in the United States. As of August 1, 2019, more than 110,000 people are on the national waiting list for a kidney transplant. On average, 13 people die each day waiting for a kidney, according to the National Kidney Foundation; a problem exacerbated by the fact that most of the kidneys transplanted in the U.S. come from deceased donors.

An estimated 15 percent of U.S. adults, about 37 million people, have chronic kidney disease and most—nine in 10—don’t know they have low kidney function, according to the Centers for Disease Control and Prevention.

In July, President Donald Trump signed an executive order directing the U.S. Department of Health and Human Services to develop policies that would encourage and support more living kidney donations and address the organ shortage crisis. The administration included three main directives: prevent kidney failure whenever possible through better methods of diagnosis, treatment and preventive care; reduce the number of patients receiving dialysis treatment at designated centers and increase patient choice through affordable alternative options, including at-home care; and increase access to kidney transplants. The order not only addresses the need for the development of an artificial kidney, but also increased support for living organ donors, including regulations to remove financial barriers such as the reimbursement of travel and other expenses incurred during the donation process. 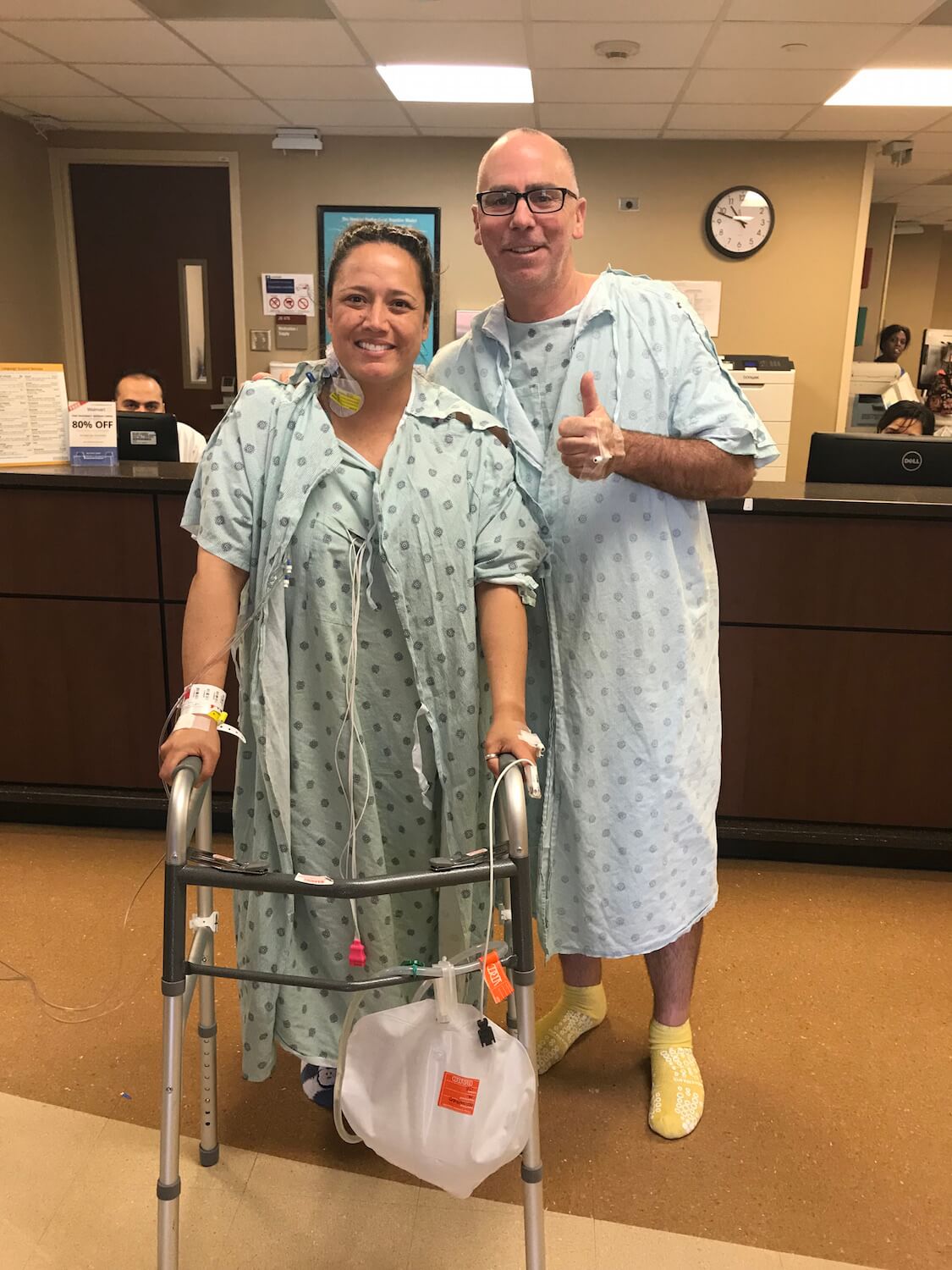 Tasha Herrera and Mark Neville after their surgeries in March 2019 at the Transplant Center at Memorial Hermann-Texas Medical Center. (Credit: Courtesy photo)

Herrera’s team at the Transplant Center at Memorial Hermann-Texas Medical Center told her that the first step was to just ask—to send an email to relatives and close friends to let them know that they could get tested and that donating was a possibility. So, Herrera sent an email to a small group of people, reiterating that everything was confidential and that no one should feel obligated to get tested if they didn’t feel comfortable with the idea of giving up one of their organs.

But by October, with no matches and no end to her dialysis in sight, she and friend put together a flyer that could be shared on social media. She posted it to her Facebook, Twitter and Instagram accounts, hoping that, through the power of online networking, friends of friends of friends would see it.

And all the way back in California, Neville did.

Without telling Herrera, he clicked on the link and agreed to begin the process. The Transplant Center at Memorial Hermann followed up shortly thereafter and helped him arrange blood testing and the required 24-hour urine collection through a clinic in his local area.

The results showed that he was a possible match. The next step was traveling to Houston for more detailed tests, which confirmed everyone’s hope: Neville’s kidneys were a perfect match for Herrera.

She learned the news in January.

“I was at my monthly appointment with my doctor and I got a phone call from the Transplant Center and they said, ‘We have a perfect match for you,’” Herrera recalled. “I was like, ‘Seriously?’ and they said, ‘Yeah, 100 percent.’ I just cried.”

Herrera asked who it was, but was told that the donor wanted to call and tell her personally. Later that night, Neville’s name popped up on her cell phone and she knew immediately.

“I’ll see his family when I go home, but we don’t talk on a regular basis,” Herrera said. “Of course, I cried. I thanked him. I kept asking him if he was sure he wanted to do this. I was like, it’s an organ—it’s not just giving me a pint of blood or something.”

Neville describes the following weeks as a whirlwind. The day before the surgery in March, Herrera gave him an assignment: “You have to name the kidney,” she said.

A lover of surfing and all-things Hawaii, Neville told her his decision after the procedure was performed by J. Steve Bynon, M.D., chief of abdominal transplant at Memorial Hermann-Texas Medical Center and UTHealth.

Today, Kona the kidney is functioning perfectly and keeping Herrera alive. As for Neville, he’s as healthy as ever and said the experience has changed him for the better. He has even joined the John Brockington Foundation, which promotes organ donation and is based in his hometown of San Diego, and hopes to encourage others to pursue living donation.

“I think life is about experiences and when I’m 80 years old and look back at this, this is going to be one of the best experiences of my life,” Neville said. “And the fact that it was to help Tasha, who my family has admired for so many years—that made it even better.”