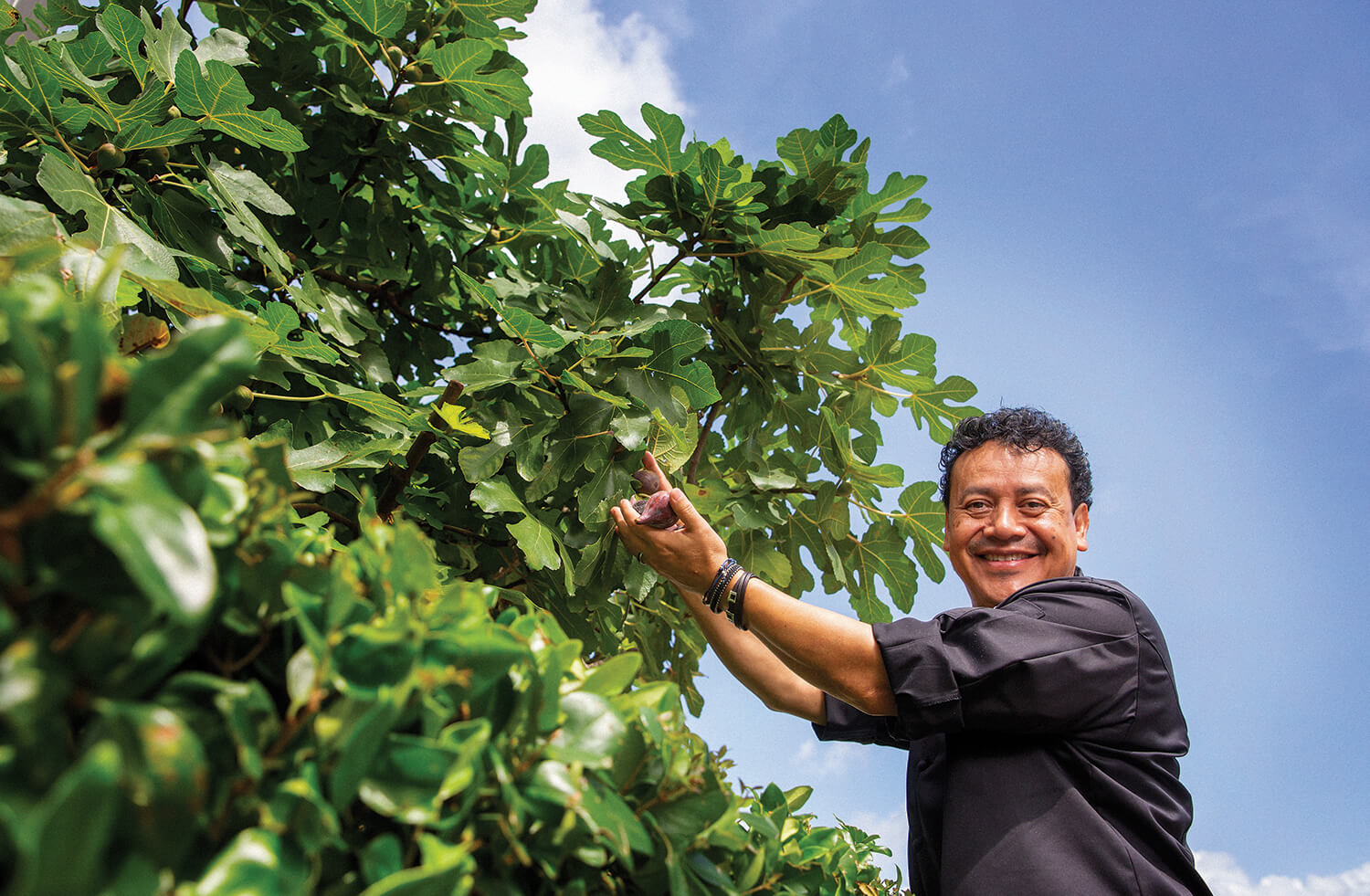 HUGO ORTEGA is the executive chef and co-owner of some of Houston’s most acclaimed restaurants, but the James Beard Award winner wasn’t born with a silver spoon in his mouth. The eldest of eight children, Ortega was raised in Mexico and moved to Houston in 1984, determined to find employment. He started as a dishwasher and later as a busboy and line cook at Backstreet Cafe, working under owner Tracy Vaught, whom he later married. The two have since built a culinary dynasty in Houston, opening Hugo’s, Caracol and Xochi.

Q | Who is your idol?
A | My grandmother. I was born in Mexico City, and when I was six, I went to live with her in the mountains in Oaxaca. I was a city boy always surrounded by people, and then when I went to live with her, it was just me and her by ourselves on the top of a mountain, with nobody around. So, I was afraid in the beginning. But she took me by the hand and she showed me how to work the land. In the summer, we harvested watermelons and cucumbers and tomatoes. We lived to eat, literally. We would make a live fire every day by collecting wood and by being exposed to nature, and she showed me how to respect the animals and the food and the people who are surrounding you. She showed me how to cook. That was really, really wonderful.

Q | When you made the decision to leave Mexico, why did you choose to come to Houston?
A | At the time, I had a cousin who lived here, and from time to time he sent letters to my aunt, his mom, and I would read these letters to her. And he would say he was doing well, and sometimes he sent $20 or $50, which at the time was a lot of money, especially considering the exchange rate in Mexico then. Being a teenager, that opened my eyes, and I said, I need to go where he is. So that was the beginning of my considering it. Then at some point, eventually a couple of friends and I made the decision to come.

Q | We’re sitting here in your flagship restaurant, Hugo’s, which is situated in the heart of Montrose. What do you love most about this neighborhood?
A | Culturally, it’s very important for me to be here in Montrose. It’s where all the writers and artists live, where every person expresses themselves freely, and I’m very happy to be a part of this community and to be able to cook for these wonderful people. We’ve been here for 17 years now.

Q | Are the recipes you create today inspired by the culinary foundation you built when you were young?
A | You develop flavor by knowledge, by eyesight—seeing how previous generations have done it and add a bit of flavor to that. I think that has stayed with me. But as you get older, you spread your wings, and then someday you get brave enough to say, well, I want to tweak it a little bit and see what happens. And those are baby steps. Now when you’re cooking at home, of course, you’re free to experiment more, but when you have the obligation to cook professionally and look at it from a business point of view, I’m responsible for another 40 families at the end of the day. Responsibilities kick in and you have to make sure you’re careful how you approach something. Food is so important and you want to make sure people are still enjoying it. It’s just part of owning a business.

Q | I’ve heard that you grow at least one ingredient for your dishes onsite at Hugo’s. Can you tell me more about that?
A | About five years ago, a friend came by and give me a very small fig tree, it was maybe even just a branch. I thanked him, but said, ‘Where am I going to plant it?’ And he said, ‘Figs love sun. Plant it right there in the middle of the parking lot.’ So, I did that. And the following year it had grown into a small bush, and it gave figs. I see birds coming and taking advantage of the fruit and I said, wait a minute. I got upset and I said, you know, we need to be smarter than these birds. We need to collect the fruit ourselves and see what we can do. And of course, what came naturally to me was to make molé. So, I did a fig molé. And then I asked Tracy and a couple of the chefs how they would serve the molé. Traditionally, for us, it is chicken and tortillas, but this molé had sweet tones. A friend of mine is a hunter, and from time to time he will bring venison and I will make tamales for him, and this particular time he told me he had some quail. So, I served quail with fig molé. That was one of my first experiences with making a seasonal molé with fruit that grows around here. Since then, I’ve made others. This year I made two molés: mango, using fruit from Mexico, and pineapple. I’ve made cherry too, and peach. I have a peach tree at Backstreet that, luckily this year, gave lots of fruit, so I am now doing a white peach molé. We serve that with lamb ribs. I’ve challenged myself to make a different molé now every summer.

Q | Is it critical to you to source your food locally?
A | Local is very important. When you are part of a community, you have to look around and see what you can utilize and contribute—to make the food more a part of who you are and where you live. From time to time I even ask my neighbor across the street from Hugo’s if we can use flowers from his beautiful magnolia tree. We use them for the tables for brunch on Sundays. It’s a part of where we live, and that kind of relationship is very important.

Q | Increasingly, consumption of processed foods has been shown to have major health consequences, contributing to diabetes, heart disease and even some cancers. Do you think people would be better off if they cooked more and ate less processed or packaged foods?
A | Definitely, absolutely. It’s a given as a Texan, because this state is so wonderful—it’s big in every direction. You have the ocean over here, the Gulf of Mexico, where you can just go to Freeport and get some beautiful fish and shrimp. You can get watermelon, peaches, tomatoes, corn—all summer long—and you don’t need to worry about processed food at all. We have a Mexican market and a farmer’s market we visit frequently, where you’ll find chicken and farm eggs, organic produce, beautiful flowers—it’s not important for us to get processed foods. 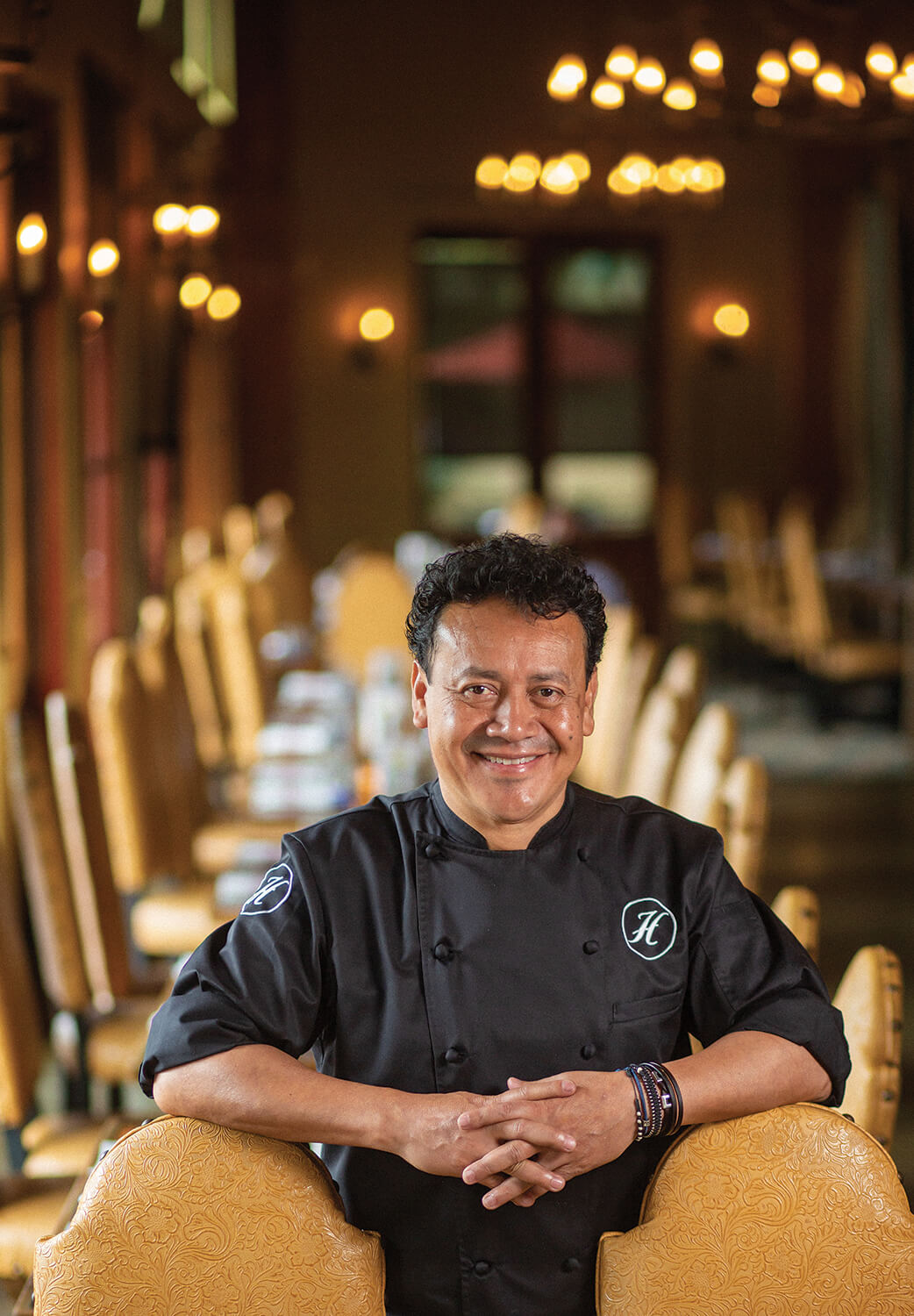 Q | What is your favorite food?
A | Corn! It’s something I enjoy eating every day in many ways. There’s corn on the cob, and masa is used to make tortillas, and once you have that, you can put everything in a taco, right? It’s the same with Italian food, when you combine water and flour and you make pizza dough, you can put anything in a pizza. I think Mexican food is more popular than ever these days—even the great Thomas Keller [chef and proprietor of The French Laundry] recently opened a Mexican restaurant in Napa.

Q | As a chef and business owner, do you have any regrets about your career?
A | I think we’ve taken a long time to develop new concepts. For example, we opened Hugo’s in 2002, after Tracy owned Backstreet Cafe since the early eighties. And then six years ago we opened Caracol, which is coastal Mexican cuisine, and then three years ago we opened Xochi, where we serve Oaxacan food, which is where my grandmother was born. So, I wish I had been a little more aggressive and opened restaurants more frequently. But that’s easier to say than to have the money to do it. There’s always that competitive drive to challenge yourself and create a new concept.

Q | What are your hobbies outside of cooking?
A | I love cycling. It’s a dangerous sport, but that’s my passion. I go into George Bush Park and I cycle there with friends. I’ve had some really bad accidents; one time I broke my clavicle. You have to concentrate when you’re riding your bike, but it’s a wonderful thing to do—it’s just you and the bicycle.

Q | In addition to the restaurants you have opened as part of H Town Restaurant Group, your wife co-operates Third Coast Restaurant at the Texas Medical Center and co-owns Prego Restaurant in Rice Village. Each year, all these restaurants participate in Houston Restaurant Weeks, during which proceeds from specially priced lunch, brunch and dinner menus benefit the Houston Food Bank. What makes this fundraiser so important to you?
A | Being here, you’re always in a position to give back. I truly believe in that. There are people that need more than me today, and any way I can help, I want to do that, to contribute to my society. And a cook is always welcome. We can feed the world, right? I feel blessed to be able to contribute back to this wonderful city.

Hugo Ortega was interviewed by Pulse senior writer Alexandra Becker. The conversation was edited for clarity and length.