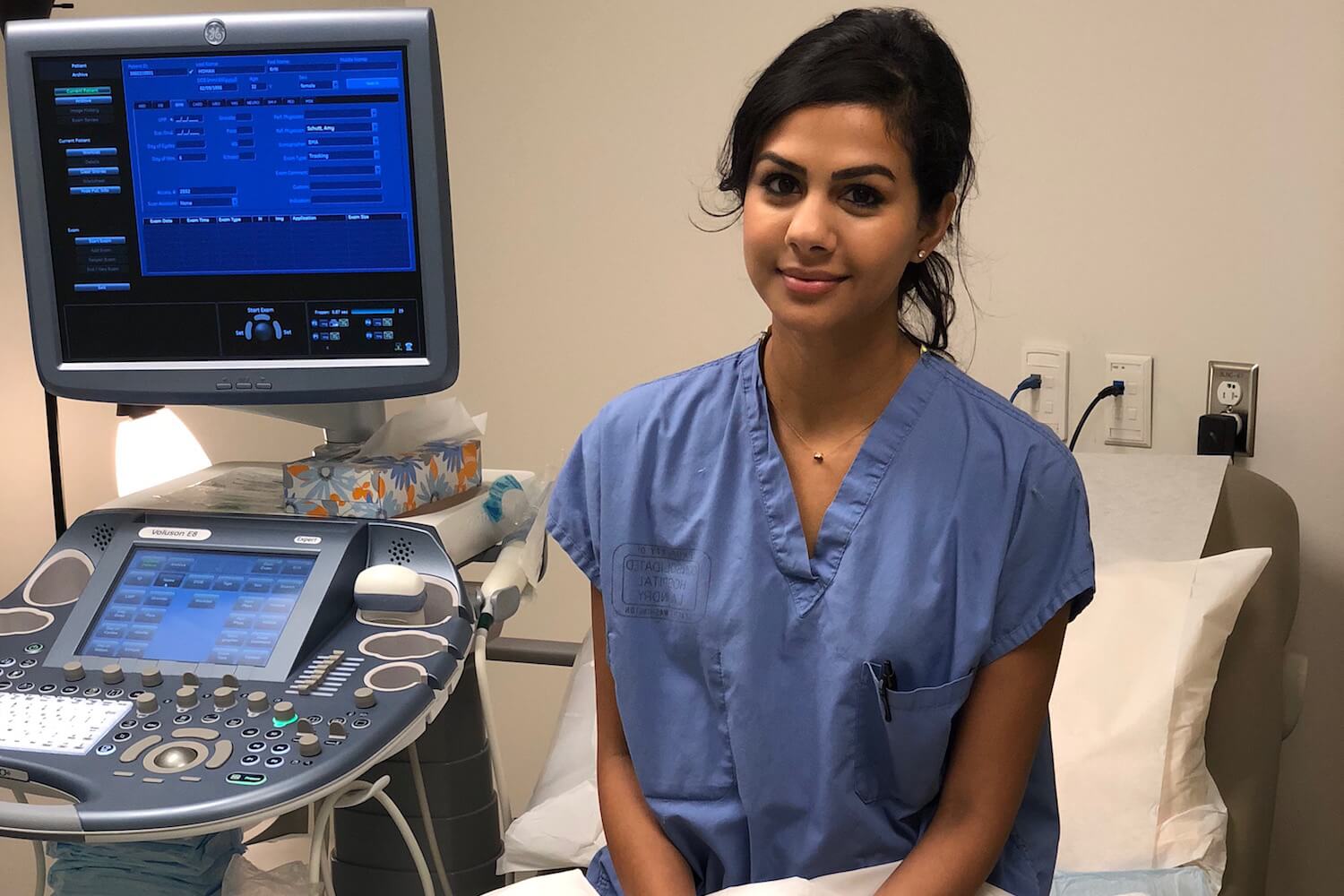 Around the time Kriti Mohan, M.D., turned 32 in 2018, the mounting societal pressure of starting a family began to weigh on her. She knew her biological clock was ticking, but she was still single and driven by her career as the chief resident of plastic surgery at Baylor College of Medicine.

“There are some women who know 100 percent that they’re going to have children and all of this. For me, it was kind of one of those things that’s always been on the back burner because I was taking care of other things,” Mohan said.

She had looked into freezing her eggs a couple of years earlier, but she was in the midst of her surgical residency and spent every single day in the operating room. Logistically, it was impossible for her to leave in the middle of surgery to attend to her own medical procedure.

At 32, Mohan was headed toward “advanced maternal age,” the section of the reproductive timeline that starts at age 35, when the risk of birth defects and infertility increases. So she decided to hedge her bets and freeze her eggs.

The decision, she said, was liberating.

“I don’t have to feel that pressure of having a kid that a lot of people do,” said Mohan, now 33. “Nowadays, women and men are very equal, and we really are made to feel that way, but in terms of biology that’s just not true. This equalizes the playing field, to a degree. … You get to be like a man. There’s no biologic clock for you. Maybe you’ll have to have IVF [in vitro fertilization]. Maybe you’ll have to have a surrogate. Maybe you’ll have to do all those things, but in terms of people telling you that your eggs are old or that you can’t use them, that’s just not the case anymore.”

Hitting pause
The first reported human birth from a frozen egg occurred in 1986. The American Society for Reproductive Medicine (ASRM) initially classified egg freezing as experimental; however, in 2012, the ASRM removed the experimental label. Since then, the technology behind preserving fertility has improved and given women more control over their reproductive futures. More recently, employers including Apple, Yahoo, Uber and others have started to offer some insurance coverage for egg freezing as an incentive to retain employees.

The Society of Assisted Reproductive Technology reported an increase in egg freezing technology to preserve fertility. In 2016, there were 8,825 cycles of fertility preservation; that number increased to 10,936 the following year.

“It gives the woman the choice of, ‘I can freeze my own eggs and I have a choice in the future,’” said Mazen Abdallah, M.D., a reproductive endocrinologist and OB-GYN at Memorial Hermann Hospital. “It keeps the doorway open for her to have a child or children with her future partner and makes the dynamics of her relationship easier.”

Prior to treatment, doctors run a series of blood tests to check the quantity and quality of eggs in the ovarian reserve. The egg freezing process consists of three main steps: ovarian stimulation, egg retrieval and freezing.

During the first two weeks, patients take follicular stimulating hormone (FSH) injections to stimulate the ovaries to produce eggs. In some cases, the brain may read these unusual hormone levels as a signal to ovulate early. In order to prevent premature ovulation, doctors prescribe a hormone antagonist to counteract the body’s response.

Doctors monitor the progress of the follicles— fluid-filled sacs inside the ovaries that harbor the eggs—under ultrasounds. Once the eggs have matured and are ready for retrieval, the patient is placed under sedation while doctors pass an ultrasound probe through the vagina to the follicles and use a suction needle to draw out the eggs. On average, 12 to 13 eggs are retrieved, with a maximum of 15 eggs.

“If we looked not too long ago, 10 or 15 years ago, the only credible option for women would be to freeze embryos,” Abdallah said. “We have been good at freezing embryos for years, since the ’80s, but to freeze an embryo when you’re not partnered means you have to select the sperm now and then deal with it later.”

Egg freezing
was not as successful until the early 2000s, Abdallah added, when a new technique called vitrification was introduced. Instead of the old-fashioned method of slowly freezing the eggs from 37 degrees to minus 196 degrees Celsius, vitrification is a flash-freezing technique in which the eggs are immersed in liquid nitrogen and frozen almost instantaneously. This process prevents ice crystals from forming, which damages the eggs and renders them unusable.

Once the eggs are frozen, they can be stored for “a month, a year, 10 years. Time doesn’t matter anymore because they’re frozen,” Abdallah explained.

With eggs frozen in time, a woman can hit the pause button on her biological clock.

“When you freeze [the eggs], you stop all metabolic activity in the cell,” Abdallah said. “Whether you stop it for a day or a week or a month or a year or 10 years or 100 years, it’s as if you hit the pause button. When you un-pause it … it’s going to pick up from where it was. The trick is knowing how to hit the pause and un-pause buttons efficiently.”

The process is expensive. Harvesting eggs costs approximately $10,000, plus $500 annually for egg freezing and storage, and another $5,000 for IVF.

Bad news
Successfully freezing eggs is, ultimately, a numbers game. In order to harvest eggs and freeze them for future use, a woman must start with a large number of eggs.

“Each woman is a bit different and her body is programmed physiologically to lose eggs all the time. As she advances in life, she’s losing eggs,” Abdallah explained. “She’ll get to a point where the egg content in the ovaries is going to be lower and this reflects on the chance of getting pregnant, because the remaining eggs are typically a lesser quality and would make pregnancy harder to achieve. That would make miscarriage more common.”

Some women’s biological clocks tick much faster than others. After Kriti Mohan’s egg viability and production test results came back, her doctor called and asked to speak to her in his office.

“The doctor … said, ‘I’m sorry, this is the worst news I’m going to give today. I actually don’t think that we can freeze your eggs. In fact, I don’t actually think you can get pregnant,’” Mohan recalled. “To this day, he doesn’t really know why.”

Her doctor tested her anti-Müllerian hormone (AMH) levels, which measure a woman’s ovarian reserve—the quantity but not the quality of the follicles. The doctor’s report indicated that, on average, a woman between the ages of 30 and 39 would have an AMH level less than 9.24 ng/mL (nanograms per milliliter). Mohan’s initial test put her AMH level at just .35 ng/ml—essentially the ovarian reserve of a woman over 50. She had her doctor run a second test, which came back at 1.08 ng/ml.

Her doctor could not explain why her AMH levels were so low.

“They tested other labs and did more ultrasounds, but [there was] no explanation, was what I was told,” Mohan said.

The news, she said, threw her for a loop. She wasn’t married—in fact, she had just started dating somebody. And she was about to finish her residency.

“My mom pressured me to have a child right then,” Mohan said. “For a second, to be honest, I actually did think about it. That’s when I realized this whole thing was insane. It makes you kind of crazy. … It forces you to really grapple with, ‘Yes, I want a career, but do I want a child? Do I want a family? When do I want that?’”

Mohan’s doctor told her she would have to undergo the egg freezing process all over again and, even then, he did not know if she could even have one pregnancy. But Mohan remains hopeful and has even chronicled her fertility journey on Instagram.

Even after the emotional rigmarole, she said freezing her eggs still provides an “enormous sense of relief” and feels like “there’s this burden of a clock that’s ticking that doesn’t exist anymore.”

“At the end of the day, the whole reason I decided to do this was because I didn’t want to feel pressured,” Mohan said. “I didn’t want somebody to tell me when my time was right. When [the bad news] happened, I felt like somebody was doing exactly that—somebody was telling me and making the decision for me that I needed to have a child right now. To me, after I actually went through the whole emotional process of it, it allowed me to still decide to do it. I wanted for it to be empowering and for me to make my own decision.”

Treating melanoma in the eye