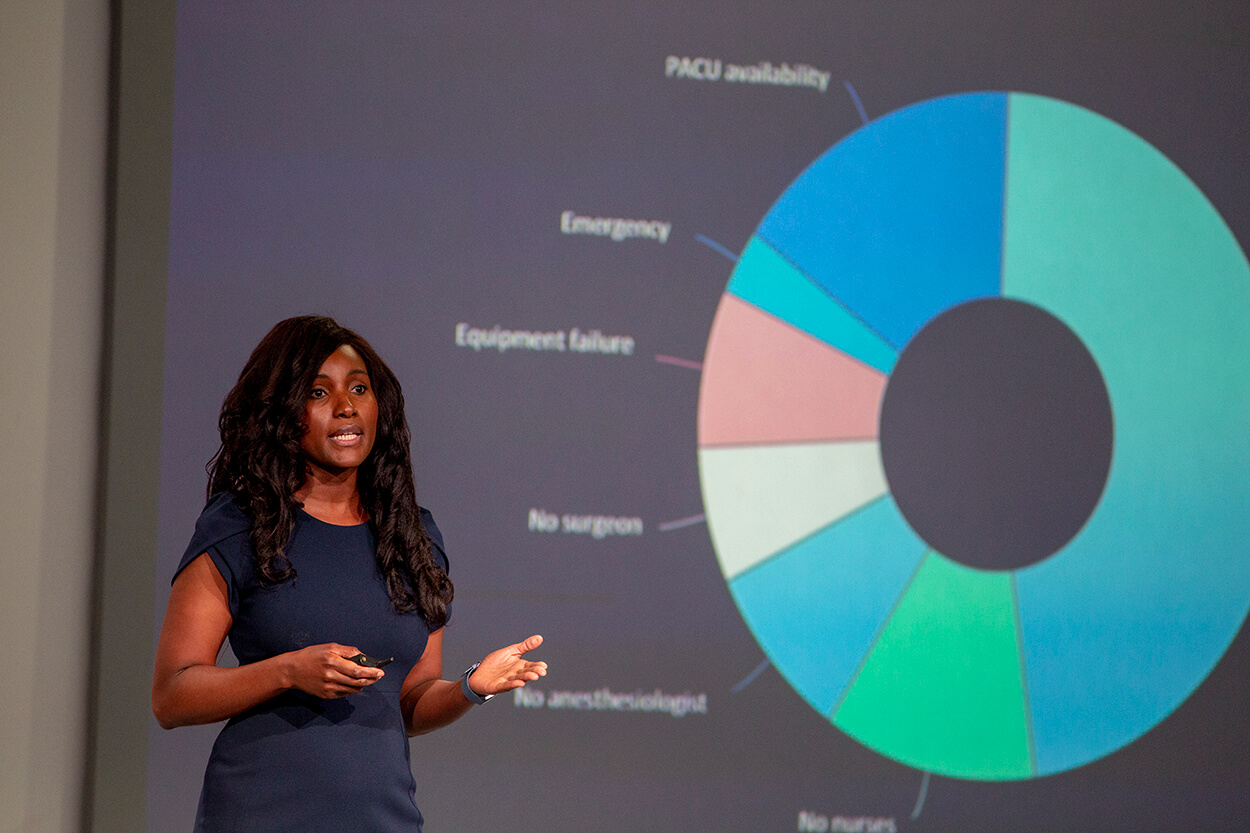 TMCx Demo Day for digital health drew a standing-room-only crowd to the Texas Medical Center Innovation Institute on June 6, 2019 to hear presentations from the 19 companies in the TMCx08 cohort.

“Here at TMC Innovation, we offer a whole range of resources for our startups,” TMC Innovation Institute Director Tom Luby, Ph.D., said in his opening remarks. “From individuals to fully formed companies, we have something for you that can make a difference in the way that you view your success as a startup company.”

TMCx associate director Lance Black, M.D., noted that the eighth Demo Day featured companies from across the globe focused on solutions to some of the world’s most complex health problems.

“It is the Texas Medical Center’s mission to advance health care, research and education,” he said in welcoming the crowd. “It’s our mission as the Innovation Institute to bring value back to the med center through health care technology and, through X, we do that with startup companies.”

The only Houston-based company of the 19, PreOp MD, was presented by CEO and Founder Christiana Obi, O.D., a local contract anesthesiologist. The platform aims to avoid surgery cancellations and delays while decreasing escalating health care expenditures.

The cloud-based technology combines empirical and lab data as well as telemedicine and text messages to make sure everything need for surgery—from diagnostic reports and supples to nurses and the patient—are ready on time for procedures.

“Surgical delays and cancellations are the major causes of waste,” she told the crowd, naming prolonged operating room time, unplanned overtime costs and the unhappiness of all participants as consequences of late or scrubbed surgeries.

“I just want to simplify surgery and save time and save money,” she said after the presentation.

Obi said she realized the challenges of coordinating all the moving pieces of surgery after completing her residency, working at different Houston-area hospitals as an independent contractor and realizing the issue wasn’t an isolated problem.

“There are a bunch of surgeons from different facilities coming to this hospital, missing labs and a lot of things,” Obi said, adding that the platform also ensures that all patient registration forms are completed in advance.

Roundtrip improves access to care by making it easier and cheaper for nurses and care coordinators to order rides for their patients. The platform found a solution to the one in five patients who miss or delay medical care because of transportation, account executive Jackson Steger said during his presentation.

The service was conceived by CEO Mark Switaj, a former EMT who saw patients frustrated with transportation challenges.

Roundtrip, which has a national partnership with the Lyft rideshare app, operates in more than a dozen states and is headed to Texas.

Transport misfires result in lost hospital revenue from patient absences while causing care coordinators to spend hours calling taxis and payers trying to make arrangements. Simply summoning a vehicle on a ride share app might not be the solution.

“It’s not always quite enough,” Steger said during his pitch. “It’s only a curb-to-curb service and there are many cases where it’s more appropriate to provide door-to-door or wheelchair or a trained driver in a medical sedan or even in an ambulance. … Also, not every patient can afford a Lyft ride, which is why we are actually able to have rides paid for by Medicaid, by insurance, by Medicare and we are able to get those prior authorizations so the … transportation company knows they’ll get paid.”

When a trip requestor needs to schedule a ride for a patient through the platform, the transportation marketplace of medical sedans, wheelchair vans, non-emergency ambulances and other vehicles—including Lyft—receives a ping.

“We have actually reduced that 20 percent no-show rate down to 2.7 percent,,” Steger said during his presentation.