Songs for a final journey

Music can soothe patients in their last days and hours

Songs for a final journey 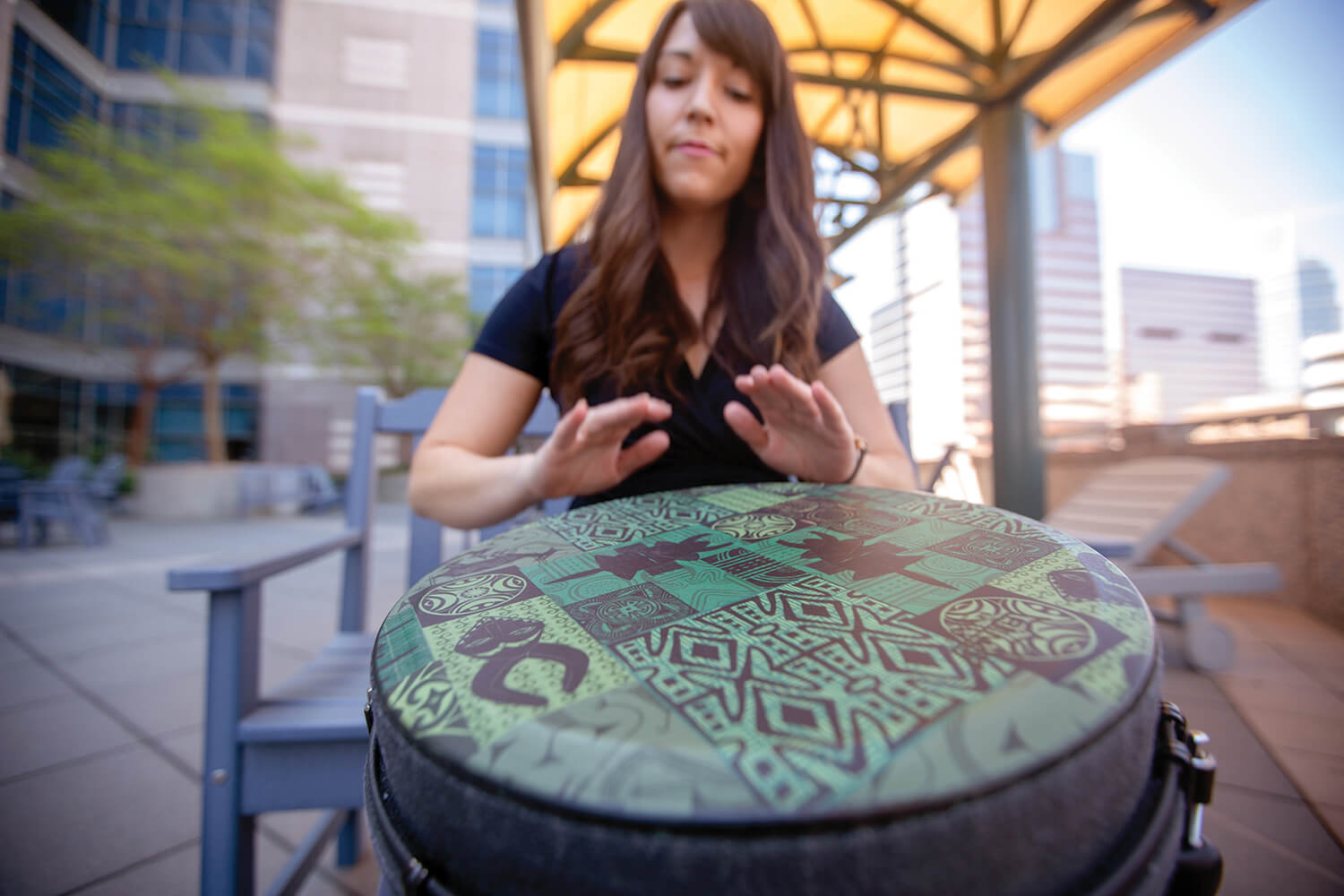 Dan Danford, a young chaplain-in-training, walked quietly into the hospital room. An elderly woman lay in bed, her two older sisters by her side. They had promised their mother they would always take care of “baby sis,” who had been born with mental disabilities and was now in hospice care, only barely responsive.

Danford began with a list of questions, hoping to learn more about his patient. Had she gone to church?

Yes, they said. She loved the music.

Danford asked about songs, then sang a verse of “The Old Rugged Cross.”

“Look!” one of the sisters said, pointing to his patient’s toe.

It was moving to his voice.

Danford explained that their baby sister could still hear them— that she knew they were there, she just couldn’t respond. He encouraged them to sing to her, and together—the young chaplain and the two elderly sisters—finished the rest of the well-known hymn.

Over the next few days, the women remained by their sister’s side, humming and harmonizing melodies from their childhood. Later, they told Danford that she passed away peacefully in the middle of a song.

“We sang her on into glory with her last breath, and that toe was tapping, so we know she was on her way to heaven,” they said.

Today, Danford—who has now been a chaplain with Houston Hospice for 25 years—knows the power of music, especially for patients and their loved ones at the end of life. Songs can help patients relax and even prompt the release of dopamine—part of the brain’s pleasure and reward system—during that transition.

Reducing levels of pain, anxiety, depression and stress associated with end-of-life care for both patients and their families can greatly improve quality of life, according to a 2018 article published in the American Journal of Hospice and Palliative Medicine.

“Music is a direct line to emotion. There are areas of our brain that light up when we listen to certain music, and it can cause an emotional response associated with happiness,” explained Sarah Folsom, a music therapist with The University of Texas MD Anderson Cancer Center, who spends at least half of her time at work with patients in palliative care. “A lot of patients will describe feeling a connection to themselves, a connection to their spirituality, a sense of peace and a sense of relaxation.”

Both Folsom and Danford said that choosing songs or music genres at the end of life should be based strictly on patient preference.

“That’s the time in your life when you’re forging your identity and figuring yourself out,” Folsom explained. “It’s not necessarily an equation, but it’s certainly a starting point.”

Increasingly, music therapy has been recognized as a valuable tool in hospitals and clinical settings, and more research is being done on its impact on patients.

“Music therapy is a board-certified, credentialed profession, and when we come into a room, we are actually working on clinical goals that a doctor or nurse has referred us for,” Folsom said. “It might be that one patient needs to lower their anxiety or another patient doesn’t have family and is feeling down and needs something active to make them feel happy and uplifted. So, music is actually the catalyst for that non-musical goal.”

Music therapists will sometimes create playlists for clinical interventions. Folsom described a technique known as the iso-principle, in which a music therapist begins the playlist with songs that try to match the patient’s current emotional state, and then through the progression of songs, moves toward music that reflects a different state.

“If someone is feeling sad or has low energy and we want them to feel happier, you start with music that validates their feelings. It’s their own preferred music—so whatever you listen to when you’re sad—and then you slowly have the playlist move towards songs that are more uplifting to you,” Folsom said.

Music therapy also engages the patient with the music therapist—conversations and even some counseling can take place.

“That’s something really powerful about working with patients who are going through these really emotionally turbulent experiences,” Folsom said. “It can be hard to verbalize what they’re experiencing, and music is a metaphor—they might be able to point to a song lyric and say, ‘That’s what I’m feeling.’ Even if they can’t verbalize it, they feel validated and understood.”

Rachelle Carrillo, a radio host for KSBJ, a nonprofit contemporary Christian music radio station based in Humble, Texas, receives frequent requests from listeners who are coping with death or a terminal illness. One that is overwhelmingly popular, she said, especially for patients and families affected by cancer, is the 2013 song “Overcomer,” by the artist known as Mandisa. Among its uplifting refrains: You’re not going under/ ‘Cause God is holding you right now.

“It has been the anthem for so many,” Carrillo said. “Just that encouragement to keep putting one foot in front of the other. … There are so many people who are here in Houston because of the medical community, and they’re here because of our incredible doctors and medical staff that can help them through whatever it is they’re going through. … There is just incredible peace in knowing that God’s got you … even if you’re walking through the valley of the shadow of death.”

As a chaplain, Danford often finds himself drawing on calming, repetitive music to help comfort his patients through guided meditation. One of his favorite albums to suggest is the soundtrack to the Coen brothers’ cult-classic film, “O Brother, Where Art Thou?” It’s a popular choice.

“It sometimes depends on the generation and the individual,” Danford said. “Maybe they want big band era because the patient and his wife loved to dance, or military music—John Philip Sousa—or string quartet classical music. So much of it is tied to memories.”

Danford can always tell when the music resonates with a person.

“I do notice a physical change. Through demeanor—reflected through the eyes or in the smile on their face—you can tell it’s connecting with them,” he said. “Maybe they’re reminiscing or there’s a spiritual component of, ‘I know that song and I like to sing it.’” 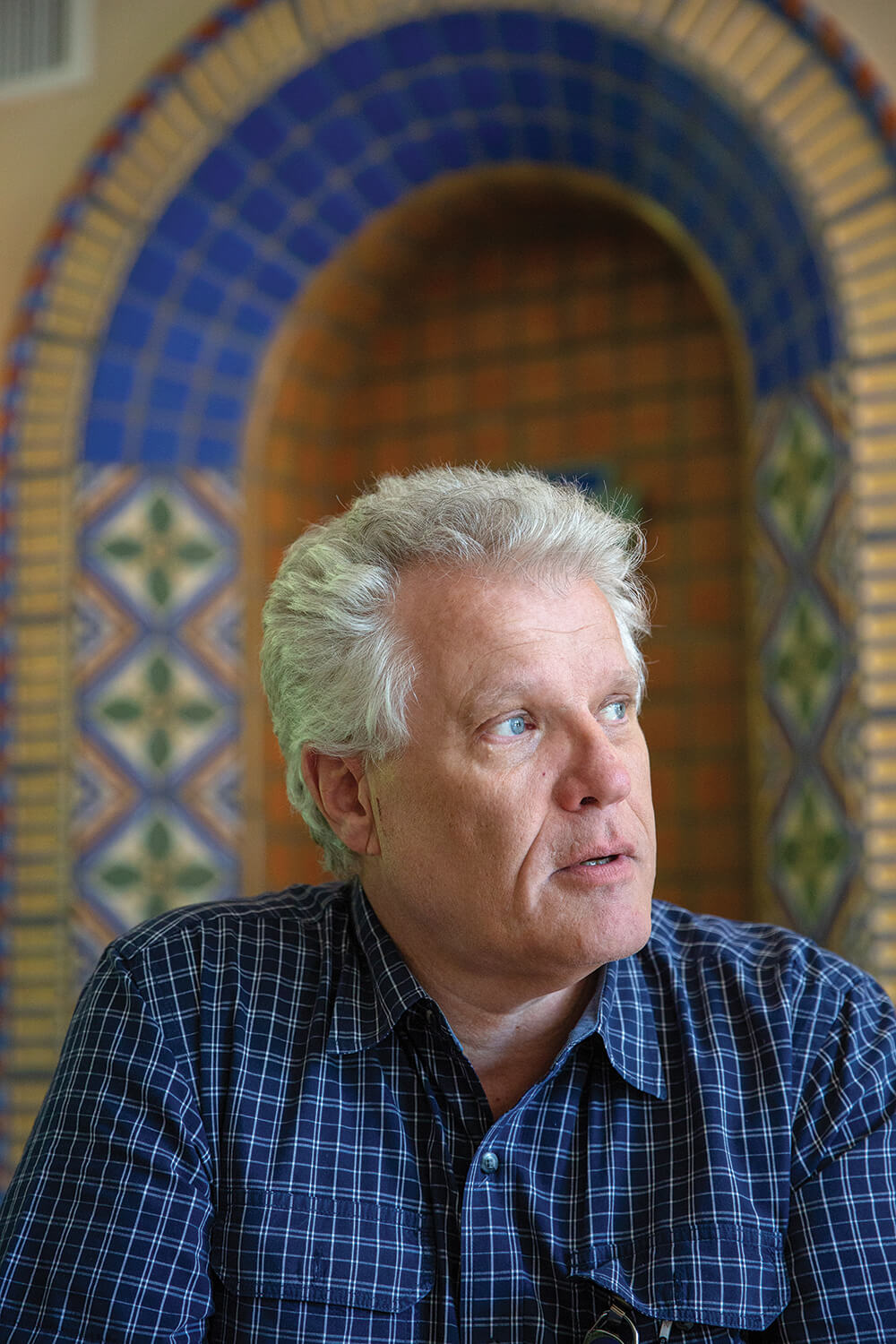 Dan Danford has been a Houston Hospice chaplain for 25 years.

Music’s power—and how it evokes memory— can be especially influential for patients experiencing memory loss due to dementia or Alzheimer’s disease. In a study published in 2018 by The Journal of Prevention of Alzheimer’s Disease, researchers from University of Utah Health found that music can activate regions of the brain that have fallen quiet in patients with dementia.

Danford regularly pulls up songs on his iPhone that are reminiscent of a patient’s generation.

“Sometimes songs from old TV shows will register with someone and they would start to converse back,” Danford said of his patients with memory loss. “The window of opportunity would remain open for a little while.”

He recalled one of his patients with Alzheimer’s who was said to love classical music. When Danford met with her, he tried humming Mozart—the opening overture to “The Marriage of Figaro.” She studied him carefully, Danford said, as if she was trying to place it. When she finally did, a huge smile spread across her face and she began laughing.

“You hear stories about patients with dementia or Alzheimer’s listening to music and they wake up and start crying, but it’s really important to know their story so you know why they’re crying,” Folsom said. “When you’re talking end of life especially, there are a lot of really important considerations for how a patient is going to be emotionally responding to the music. You want to make sure that they’re comfortable and happy.”

Folsom is often present during a patient’s final breaths. Sometimes she has pre-arranged for recorded music to play and sometimes she is there just “holding space,” playing a soft tune on her guitar to evoke a more peaceful environment. Folsom said she has even tried to play melodies that harmonize with the beeping of hospital monitors or the whooshing sounds of the machines.

For patients who are unresponsive, she watches carefully for nonverbal cues.

“You would follow their breath, follow their movements and just make sure that what you are playing is comforting,” Folsom said. “It’s humbling and you feel so honored to be a part of that.”

Family members benefit from music as much as the patient, Folsom said, as many all but move into the hospital with their loved one and are dealing with stress, anxiety and sadness themselves. She said she will never forget her experience with one patient, who pulled her into his room as soon as he saw her guitar.

“He told me all about his life and he was just so excited about the music and sang all of these songs to me that I didn’t even know. I just followed him and sang with him in the moment—he took the session the way he needed to take it, and I just supported him because that was his moment,” Folsom recalled. “It was this really beautiful connection and session and I remember when I left his room he said, ‘Never stop doing this. You do this forever; I need you to just keep on singing.’”

A day later, Folsom’s supervisor told her she had received an email from the patient’s daughter. Apparently, his family had come to visit him later that day.

“I didn’t know this because I was pulled into his room unexpectedly, but he had been really disoriented and hadn’t been remembering who people were, but that day he recognized everyone in the family,” Folsom said. “His daughter wrote that it was so special because music had always been such a big part of his life, but that he had stopped singing when he got sick.”

The patient passed away that very same night.

“You gave him music on his last day,” his daughter’s email to Folsom read. “That’s the biggest gift you could have ever given us.”