Lead poisoning continues to affect children across the Houston area

Lead poisoning continues to affect children across the Houston area 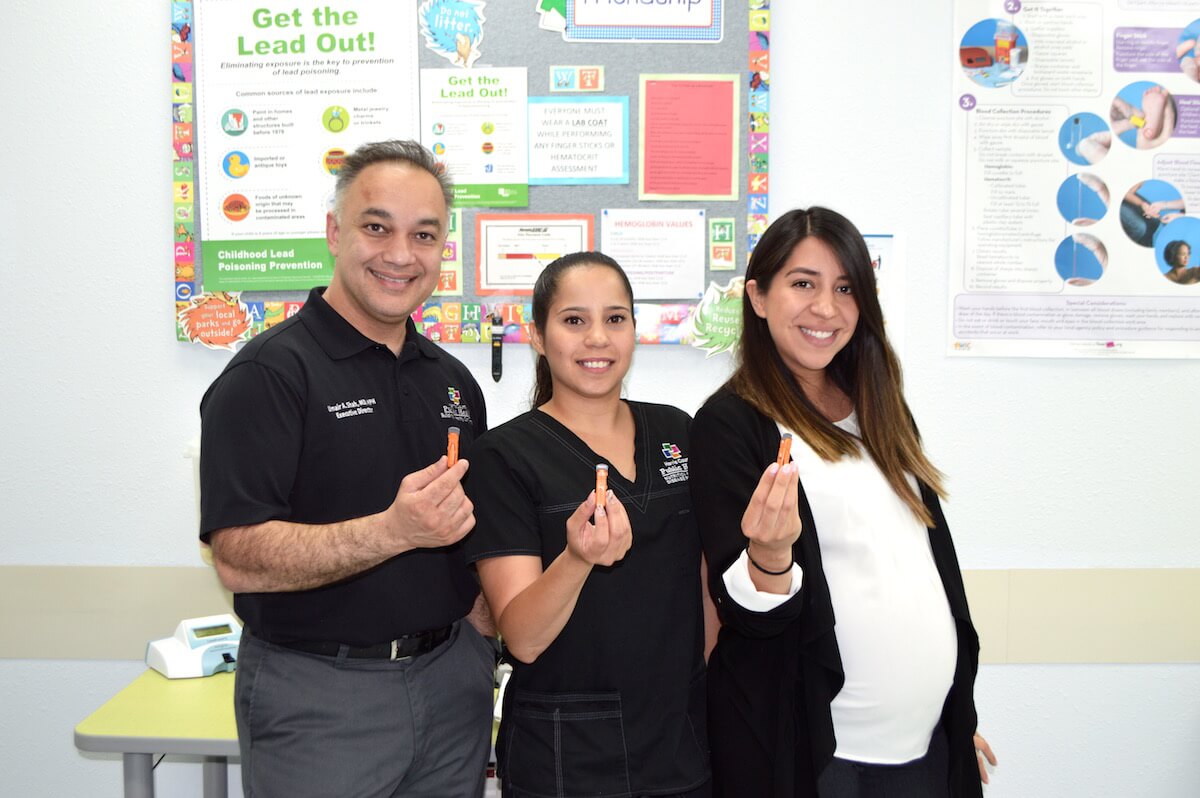 Two-year-old Ja-Kobi Hicks clutched his mother’s arm as Yashira Padilla, a medical assistant at the WIC clinic in Baytown, Texas, pricked his finger during a routine checkup. After filling a tiny vial with the toddler’s blood, she placed the sample in a machine to test for elevated lead levels. Within minutes, the results were negative, and one more child was screened and cleared of an issue that can cause lifelong, debilitating health challenges.

The screening was part of the new Childhood Lead Poisoning Prevention Program, funded by the Centers for Disease Control and Prevention (CDC) and launched last year by Harris County Public Health (HCPH). The initiative aims to reduce lead exposure and poisoning in the Greater Houston area through education and intervention.

Lead poisoning, despite common misconceptions, persists. In 2016, 1,016 children in Harris County tested positive for elevated lead levels, according to the latest data available from the Texas Department of State Health Services (DSHS). In addition, only about one in five children are screened by age five, so the number impacted is likely higher, said HCPH spokesperson India Ogazi. The agency recommends lead testing by a medical provider at least once for all children six and younger.

Lead exposure occurs when a child swallows or inhales lead. Most often, this comes in the form of lead-based paint—which was banned for residential use in 1978, but still exists in many of the Houston area’s older homes. Lead is also found in imported toys, spices, jewelry, pottery and cosmetics, and is still used in manufacturing, so parents who work on industrial sites are at greater risk of bringing lead dust into their homes.

Nathalie Cardona, MPH, the HCPH program’s team lead, said that lead exposure can happen if a child places a dust-exposed toy in his or her mouth.

“Our advice to parents is to take off those clothes before they come into the home, but the single most important thing parents can do is to watch what [children] put in their mouths,” Cardona said. “That’s the main source of lead. Wash their hands, wash their toys, and be aware of what they’re putting into their mouths.”

Individuals who live in houses built before 1978 should also wet-mop their floors, wipe down surfaces with a wet cloth and seal any cracks, Ogazi added. For families who meet certain criteria, HCPH offers a lead abatement program which provides home-based lead removal services.

Lead exposure is not immediately noticeable, which is why early screening is so important. Symptoms, which generally emerge later in life, include brain development delays, speech and language problems, slowed growth and damage to the nervous system and/or kidneys. Lead can also affect education outcomes and has even been associated with increased crime.

It’s also costly. A new web-based tool, developed through a collaboration between the nonprofit research and consulting organization Altarum and the Robert Wood Johnson Foundation, calculated the cost of lead exposure and estimated that Texas bears an $8.1 billion burden. 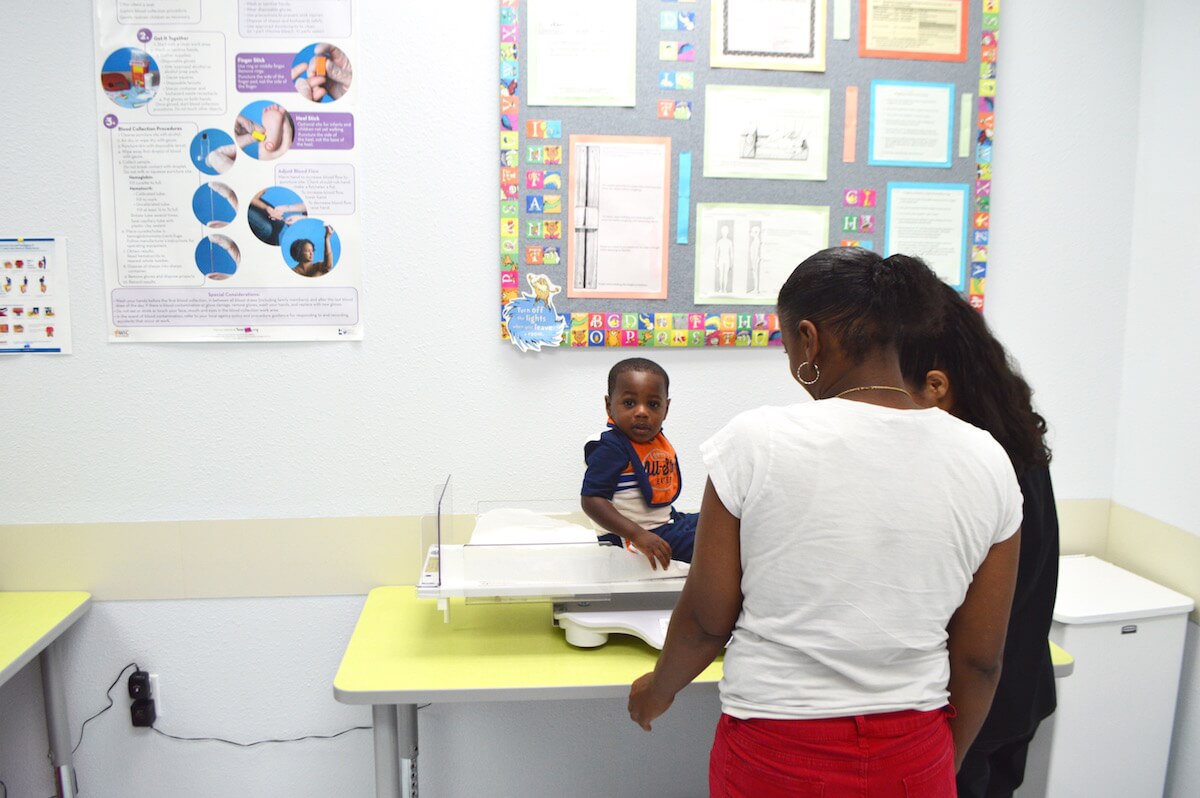 Ja-Kobi Hicks, 2, is weighed during a routine check-up at the WIC clinic in Baytown, Texas.

A second drop of blood

Texas children with Medicaid are required to be tested for lead by their pediatricians, but HCPH officials have discovered that some physicians are not aware of this requirement. Additionally, most pediatricians will not screen patients who do not have Medicaid, so part of the mission of the Childhood Lead Poisoning Prevention Program is to educate all parents and pediatricians about the screening recommendation: at least once for every children by age six.

HCPH works with the Special Supplemental Nutrition Program for Women, Infants, and Children (WIC) for the lead poisoning prevention initiative to capture part of the population included in the Medicaid requirement. Currently, the program’s lead screening services are available at two Harris County WIC clinics—the Antoine and Shaver locations—but the organization plans to expand to other WIC offices soon.

“Because our umbrella agency is Harris County Public Health—and we are already offering nutrition education and supplemental food services—our clients are very gracious and want to know about it and have been open to receiving it,” said Jolene Norbert-Harrell, HCPH’s WIC program director. “Our lab assistants will do the height and weight measurements that are required by the WIC program, they’ll do the screening for iron deficiency and then they’ll also perform the lead testing, which is just a quick finger prick—just a second drop of blood.”

Cardona said the WIC component has identified children with elevated lead levels who have received case coordination as well as referral services for follow-up care and home lead abatement.

It’s critical for children with lead exposure to eat the recommended three meals a day, with snacks in between. That diet should be high in iron, vitamin C, and calcium—which helps leech the lead from the system and prevents it from absorbing as well, Cardona said. In addition, once the lead source is removed from the home, it does not remain in a child’s system. 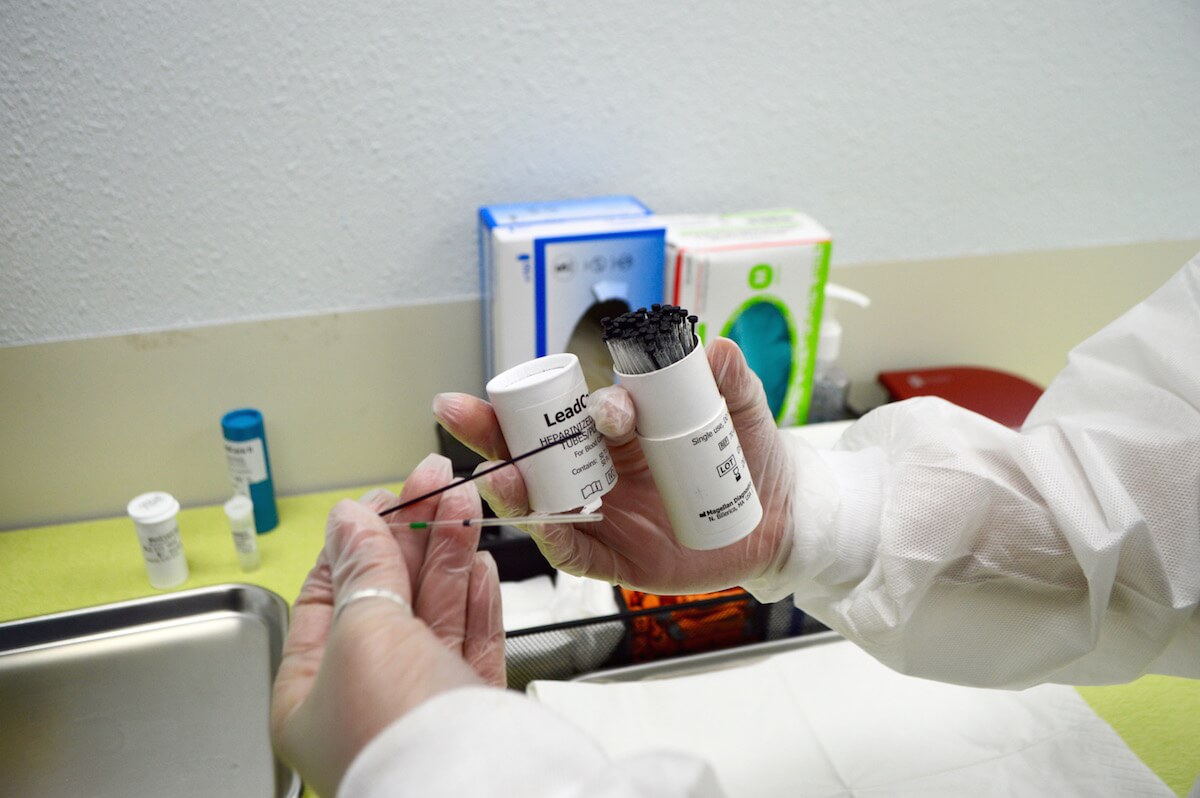 Medical Assistant Yashira Padilla holds up the vials used for lead testing at the WIC clinic in Baytown, Texas.

The Childhood Lead Poisoning Prevention Program also works closely with clinical providers to help them with additional steps, including scheduling environmental lead investigations from the state.

“We have providers who are doing great at testing for lead, but they’re not necessarily reporting it to the state, and—without that data—it makes it hard to know exactly how many children have elevated lead levels, or if indeed they are being tested,” Cardona said. “So, we advocate for that and train on the importance of lead screening and the importance of re-testing.”

To inform the public, the program stays busy with community outreach initiatives such as visiting health fairs, churches, schools, libraries and day cares.

“I always say community-wide problems require community-wide solutions, and this is one example of that,” said HCPH Executive Director Umair A. Shah, M.D., MPH. “It’s not just the health care provider, but it’s the community-wide aspect of increasing awareness … to really ensure that we are testing, but also that we’re thinking through about how to really accentuate our efforts.”