In the lab with scientist Doris Taylor, Ph.D., and “ghost hearts”

In the lab with scientist Doris Taylor, Ph.D., and “ghost hearts” 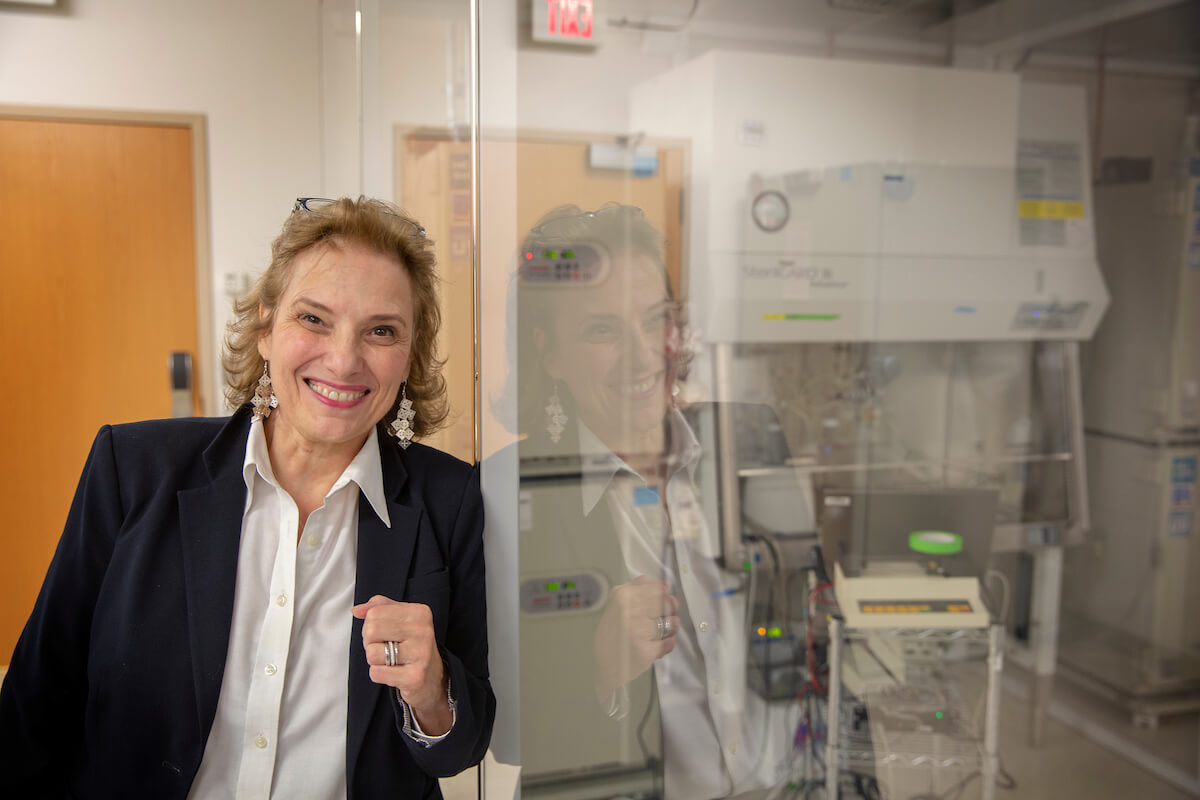 A small human-sized heart hangs suspended in a bioreactor behind a maze of locked doors in Doris Taylor’s lab at the Texas Heart Institute (THI). It is void of color, drained of blood and cells. All that is left is its natural scaffold of extracellular matrix, fully intact.

Taylor, who is the director of regenerative medicine research at THI, has already created more than 100 of these “ghost hearts”—and she intends to keep going, pumping each of them full of hundreds of millions of stem cells, hooking them up to artificial lungs and a blood pump, then watching them grow. Eventually, she believes, scientists will use this technique to create tailor-made organs for human heart transplants using a patient’s own stem cells. This could mean an end to organ shortages and anti-rejection drugs, as well as a revolution in cardiovascular surgery.

But bringing one bold new idea to fruition means finding solutions for all the large and small problems that arise along the way.

“Ten years ago, when we discovered the concept of building a ghost heart, I thought stem cell biology had advanced enough that we would be able to just take stem cells, put them in the heart, and do something cool. It’s taken us 10 years to develop methods to just generate enough stem cells to transplant a meaningful number in the heart,” Taylor said, adding that they have now developed the ability to grow over two billion human-induced pluripotent stem cell-derived cardiomyocytes a week.

“Which is unheard of,” Taylor said.

Cardiomyocytes are heart muscle cells. Induced pluripotent stem cells (iPSCs) are adult cells that have been genetically reprogrammed to mimic embryonic stem cells, though iPSCs have not yet been differentiated, meaning they have not started the process of becoming specialized cells. In other words, iPSCs are cells with an opportunity for a fresh start, which is necessary for growing new, healthy organs.

Generating the sheer number of cells required for each heart is just one of the many hurdles Taylor and her team have faced. They have also had to design and create their own methods for sterilizing the tools and environments to keep the hearts clean and healthy as the stem cells mature. But they worked through that, too, and can now keep a heart going for 60 days—a cap she’s had to implement because of the availability of resources. Each custom bioreactor set-up is expensive, so her team must stop one in order to start a new one.

But, she said, they are exceptionally close to successfully building a working, human-sized heart. And in the meantime, the knowledge they’ve gained pursuing this goal has led them to the doorstep of many other medical challenges. 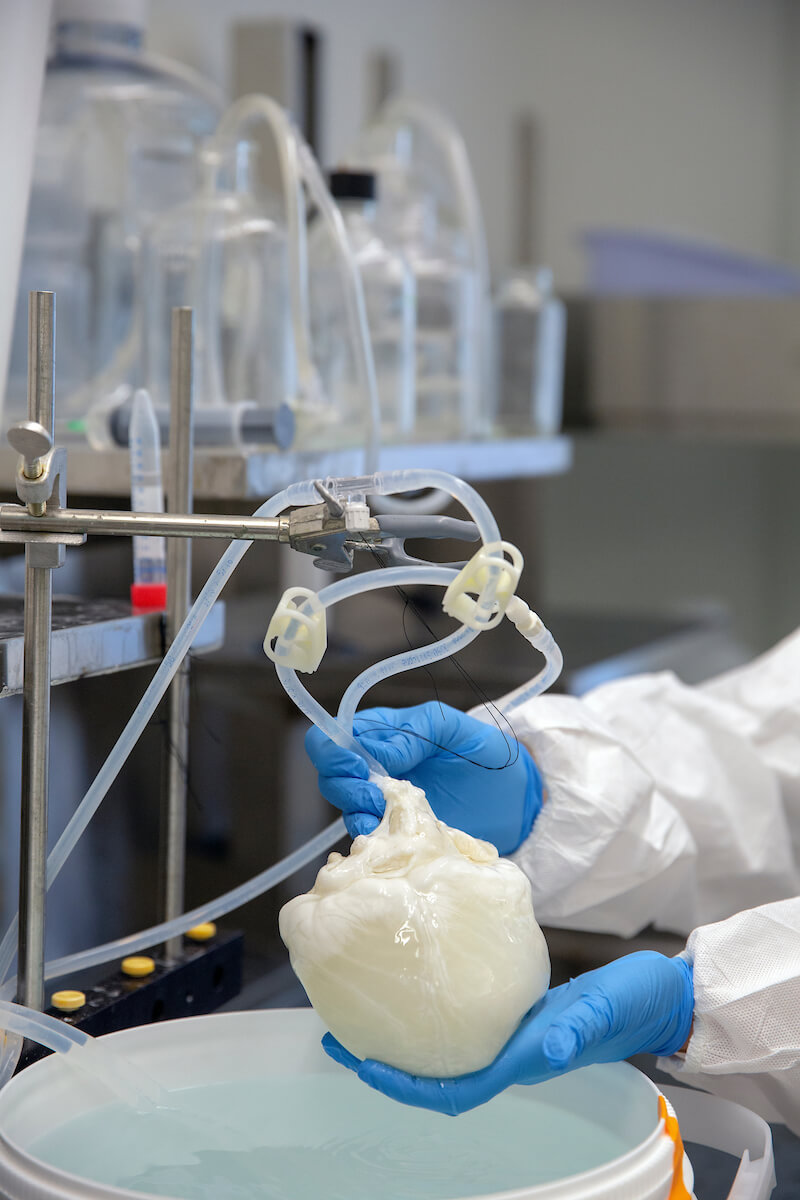 Taylor holds a ghost heart over a bucket containing a solution that is used to wash the cells from the heart scaffold. The attached tubing delivers this solution to the heart.

“We’ve learned that if we put the same stem cells in the atrium or the ventricle, they become different cells, so the matrix seems to have cues that drive differentiation and maturation, which is really cool,” said Taylor, a scientist with a Ph.D. in pharmacology. “In human hearts where heart failure is present, and where different kinds of heart failure is present, the scaffold is different. So all of a sudden, we’re learning at an intriguing level what we already knew kind of a priori, which is that stem cells respond to their environment to become what they find themselves surrounded by.”

Taylor hypothesized that one of the reasons cell therapy has yielded only modest results in repairing damaged hearts is because the stem cells are being placed in unhealthy organs.

“We’re taking these immature cells, stem or progenitor cells, and we’re putting them in a scar. And we’re saying, ‘Hey, grow up and become a healthy heart,’” Taylor said. “But what if we put them in a matrix before we put them in the heart and allow them to mature first?”

Her lab has been working on a cardiac patch that may be more successful than traditional cell therapy techniques. Currently, they are pursuing two different methods: the first involves taking a piece of decellularized healthy heart, cutting it out, then sewing it onto the surface of the heart as a patch; the second involves grinding up one of the ghost hearts and creating a powder that they then convert into a gel that is injected into the scarred or damaged area of the heart.

“It’s really about putting things in the right environment and letting them do their thing,” Taylor said. “I call it the real estate approach to cell therapy. Location, location, location.”

After noticing that individuals with heart failure seemed to have different matrices than those with healthy hearts, Taylor wanted to compare the matrices in the hearts of animals. What her team found was that in young animals, the matrices of the heart, liver and kidneys of females were stiffer than those of their male counterparts.

Taylor was puzzled. Why would that be?

“I started thinking about the fact that when women get pregnant, their blood volume goes way up,” she said. “And if your heart has to pump against that blood volume, you need something that’s tougher. We also found out that if we look in older males and females, the males catch up with the females later in life.”

Taylor took it a step further, aware that a disproportionate number of women suffer from a type of heart failure called preserved ejection fraction systolic dysfunction, in which the heart muscle contracts normally, but the ventricles do not relax as they should.

It turns out, there is a protein in the heart muscle responsible for that stiffness.

“We’ve recently found that the extracellular matrix determines how much of that protein you have,” Taylor said. “This type of heart failure is three times more prevalent in women, and I think it’s because the matrix is different, so we’ve developed a treatment that we hope to try over the next year in preclinical studies that we think will reverse that.”

Currently, Taylor said, there are no treatment options for this type of heart failure.

“It’s all because we looked at the matrix and saw that there is this underlying structural difference that tells cells how to behave. Again, it’s about environment—location,” she said.

Taylor’s lab is also learning that lifestyle can impact the health of a person’s stem cells.

“We’ve found that smoking, diabetes, hypertension—all of those things change your bone marrow, they change the cells that are there. They will increase inflammatory cells and decrease positive cells, and we’ve been able to show … that if you look at the onset of heart disease and the loss of some of these stem cells, they absolutely mirror each other,” Taylor said. “And so I say that aging, and a lot of the diseases associated with aging, are a failure of endogenous repair, and a failure of your stem cells.”

Taylor applied these lessons to her own life.

Go for the home run

Despite naysayers, Taylor has always believed she could rebuild an organ from the ground up. She believes in the complexity of “nature’s tools” and that pre-existing structural compositions are far superior to any designed by the human hand.

One of the things Taylor is most proud of is that her lab’s more mature hearts are now growing fat on the outside of the muscle.

“It’s real,” she said, adding that at this point, creating an organ is now just a matter of money and time.

“It’s about slogging through it right now, doing it over and over and over and improving a little bit every time,” Taylor said. “But that is expensive. … Right now, building a small, pediatric-sized humanized heart costs us sixty to seventy thousand dollars.”

With the right funding—Taylor said her research isn’t eligible for the usual types of National Institutes of Health funding because it’s not technically hypothesis-driven—Taylor could envision the technique moving quickly to preclinical studies. Still, she emphasized how grateful she is that THI has supported her high-risk, high-reward research.

“There’s a 50 year history of trying to build solutions for heart disease here,” she said. “That’s why I came here and that’s what has enabled us to get to this point.”

Taylor said that her work is on an exponential growth curve, and that she and her team feel like they are more in a process at this point than an experiment.

“It’s a good problem to have, but it’s a hard scientific place to be,” she said.

It doesn’t help, she added, that she chose to pursue such a complex challenge.

“It’s very different building a biologic device than it is building a mechanical device,” Taylor said. “Biology is variable, and if you build a mechanical device, you assume it’s going to act the same way every single time you build it. But if you build a biologic heart, you have to prove it’s going to act similarly, with a certain degree of variability. … Not only do we have to figure out how to build a heart, but we have to figure out how to measure building a heart, which nobody’s ever done before, so there aren’t tools out there to do it. It’s really about constantly having to rebuild everything around you, because none of it exists.”

In the end, Taylor is working to help keep people and their hearts as healthy as possible.

“My approach to science has been: go for the home run, and if it works, great, and if it doesn’t, everything you learned along the way is going to open new doors,” Taylor said.