Alumni pivotal in the location of Johnson Space Center, which placed Houston on a global stage 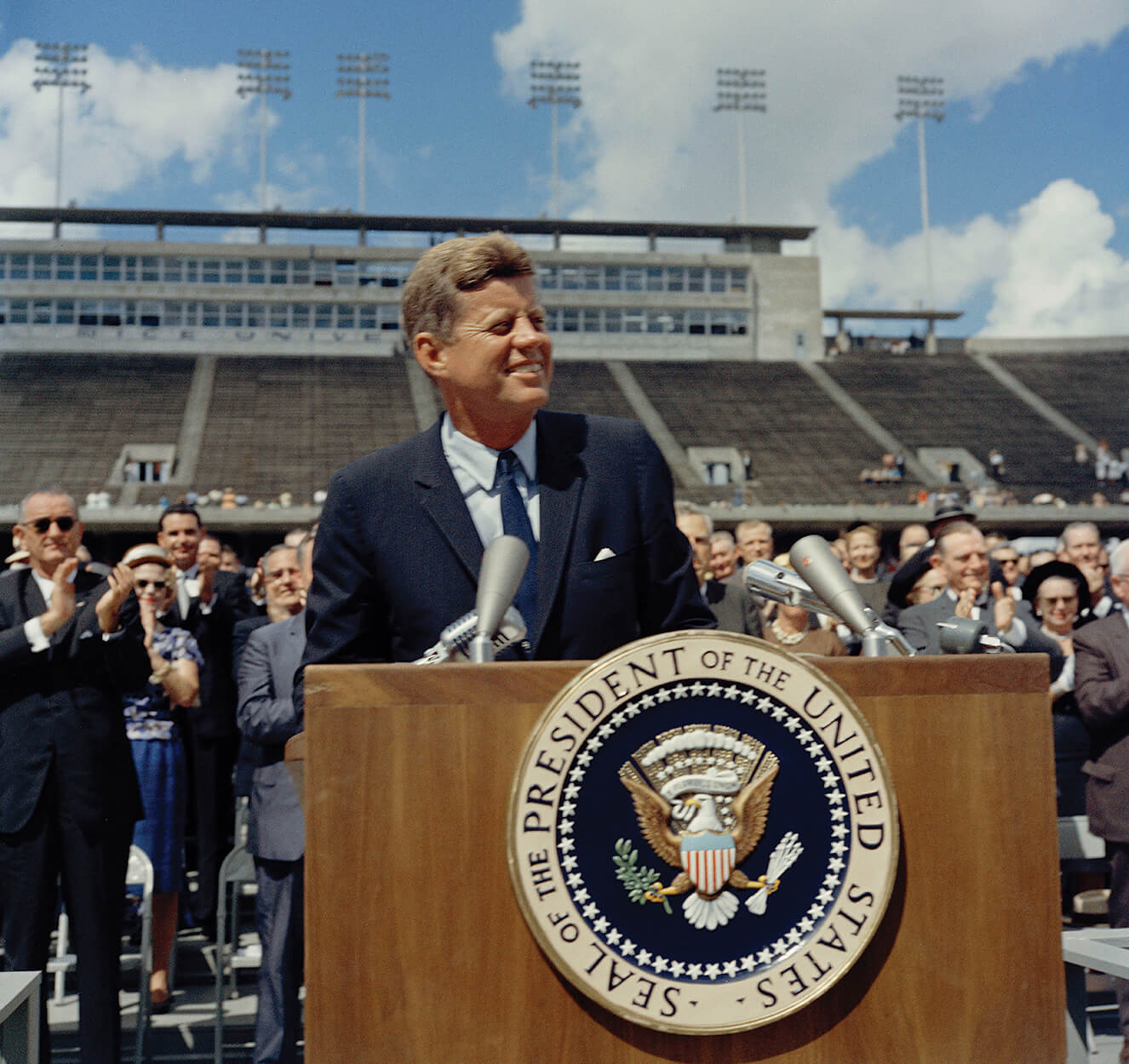 Rice University’s storied and ongoing collaboration with NASA helped Houston become the hub of space exploration, home to research and technology that continue to bolster the nation’s other-worldly pursuits.

The most celebrated connection came nearly six decades ago with a historic speech in Rice Stadium. President John F. Kennedy’s “We choose to go to the moon” address on Sept. 12, 1962, helped launch the nation’s eventual landing on the lunar surface and propelled Houston into space history.

But even before that speech, two esteemed Rice alumni were brokering deals that would allow Houston to house a major federal research facility.

Early 20th-century Rice students and roommates George R. Brown and Albert Thomas played pivotal roles in the location and development of Johnson Space Center, which placed the university and Houston on a global stage. Thomas was the first member of Congress with a Rice degree. Brown became a construction magnate with Brown and Root (now KBR) and a philanthropist for whom Rice’s School of Engineering was named.

By the mid-1950s, Brown was chairman of the Rice Board of Governors and arranged for the powerful Humble Oil and Refining Co. (now ExxonMobil) to donate 1,020 acres of land near Clear Lake to the university, which would be offered to the federal government as an incentive to locate in Houston.

Senate majority leader Lyndon B. Johnson of Texas was instrumental in founding the National Aeronautics and Space Council in 1958, which chaired as vice president under Kennedy. Thomas, by then chairman of the powerful House Appropriations Subcommittee on Defense, which controlled NASA’s budget, lobbied for Houston to land the Manned Spacecraft Center.

On Sept. 14, 1961, then-NASA Administrator James Webb delivered memo to President Kennedy that said: “Our decision is that this labora- tory should be located in Houston, Texas, in close association with Rice University and the other educational institutions there and in that region.” 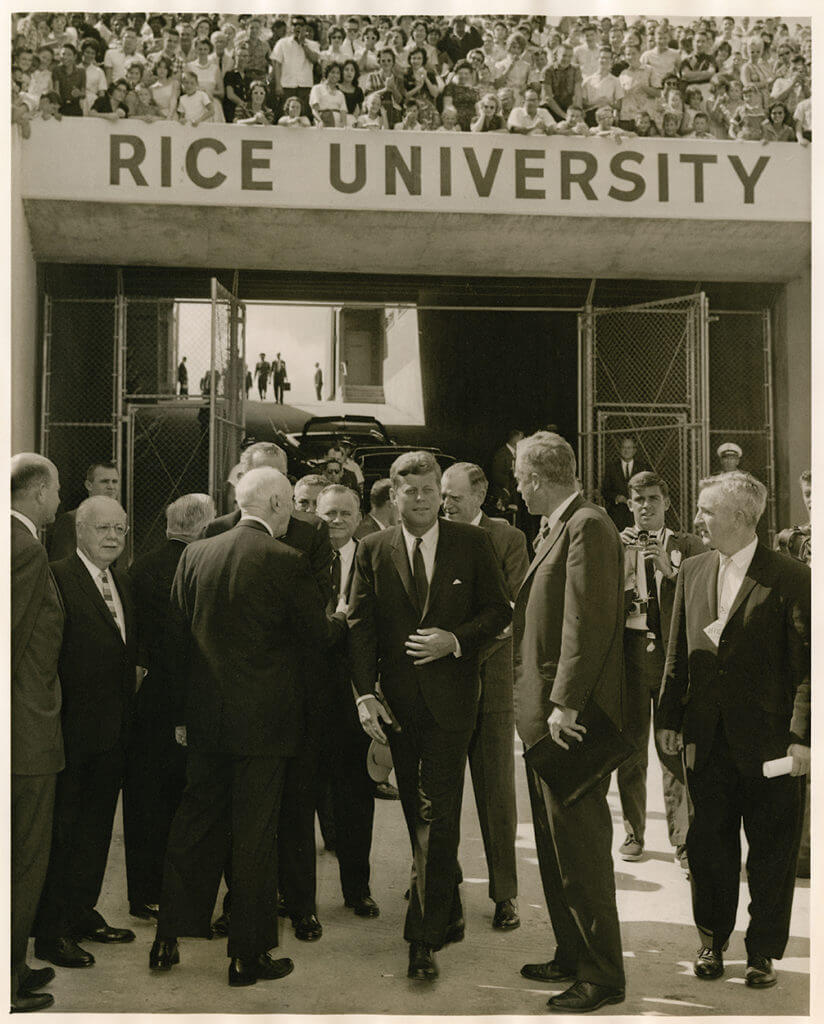 Then came Kennedy’s inspirational 1962 address on campus one year later about the United States accepting the challenge of becoming the Earth’s foremost space-faring nation:

There is no strife, no prejudice, no national conflict in outer space as yet. Its hazards are hostile to us all. Its conquest deserves the best of all mankind, and its opportunity for peaceful cooperation many never come again. But why, some say, the moon? Why choose this as our goal? And they may well ask why climb the highest mountain? Why, 35 years ago, fly the Atlantic? Why does Rice play Texas?

One month after Kennedy’s speech, the federal government acquired the 1,020-acre parcel and another 600 acres from Rice. On that property, NASA’s Johnson Space Center was built.

In 1963, Rice became the first university in the world to establish a dedicated space science department.

That same year, in November, Kennedy was assassinated. He didn’t live to see Apollo 11 astronauts Neil Armstrong and Buzz Aldrin step out of the lunar module and onto the moon on July 20, 1969. These space pioneers became the first humans to walk on the moon while carrying “a dust detection experiment designed at Rice University,” as indicated by a plaque outside Rice Stadium that features a sepia-toned photo of Kennedy’s campus speech.

“Apollo 11 came to symbolize America’s success in space, but the Apollo program’s deepest impact on mankind may well have been the generation of scientists it inspired and the laboratories and educational programs it paid to establish, including those that thrive at Rice today,” according to a history of the university’s relationship with NASA, prepared in 2009 for the 40th anniversary.

Within 18 months of Kennedy’s speech, satellites built at Rice were being launched aboard U.S. rockets.

By the time Apollo 11 landed, several dozen graduate students and countless undergraduates had helped to build instruments that made historic breakthroughs—some of which remain on the lunar surface today.

In April 2019, as part of the yearlong 50th anniversary celebration of the Apollo 11 mission, Rice University President David Leebron and NASA Administrator Jim Bridenstine, a 1998 Rice alumnus and former Oklahoma Congressman, participated in a plaque dedication commemorating Kennedy’s 1962 speech and a second-generation “moon tree” planting by Rice Stadium. The original moon trees were grown from seeds that orbited the moon on the Apollo 14 mission in 1971.

“President Kennedy’s Rice Stadium speech helped plant the seed for our nation’s leadership in the exploration of space and also the seed that led, ultimately, to this sycamore moon tree,” Leebron said. 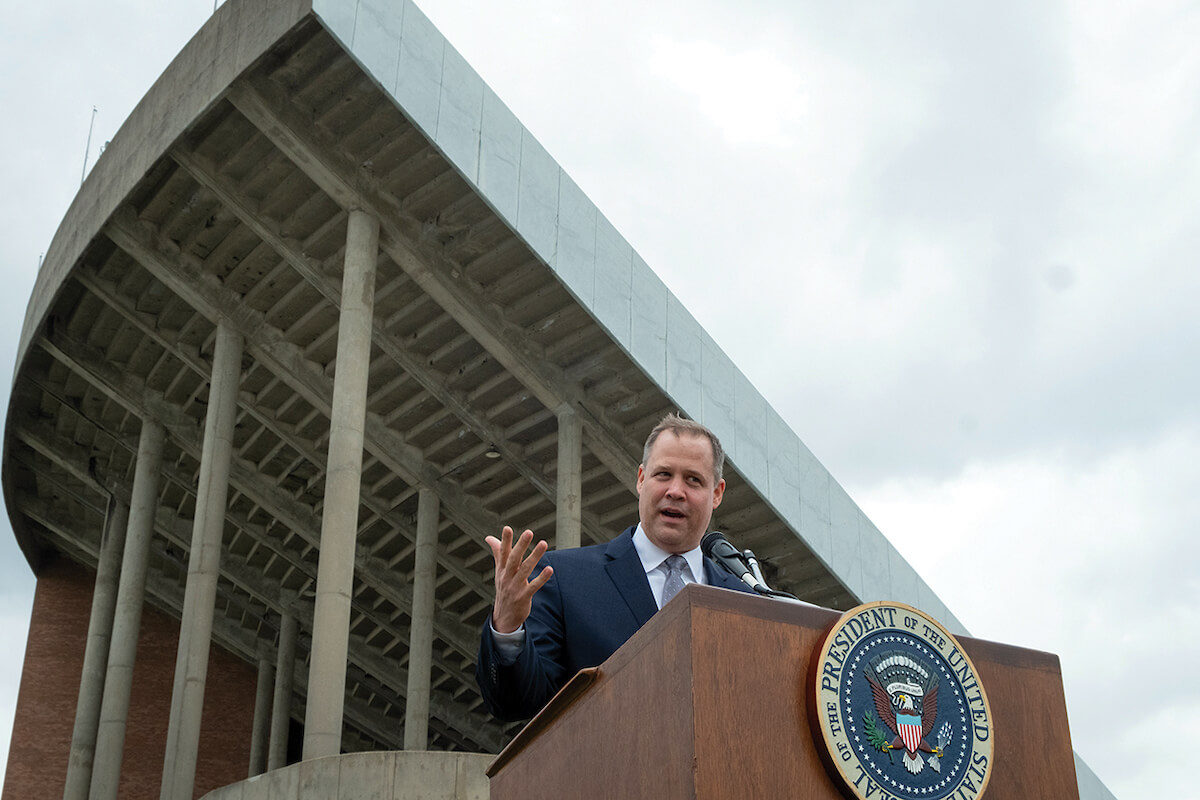 NASA Administrator Jim Bridenstine speaks outside Rice University’s stadium on April 12, 2019, during the unveiling ceremony of a plaque commemorating Kennedy’s 1962 speech and the planting of a tree honoring the 50th anniversary of the Apollo 11 moon landing. (Credit: Jeff Fitlow/Rice University)

During his speech outside Rice Stadium, Bridenstine articulated a new mission: A return of manned spaceflight to the moon for sustained exploration.

“Now it’s time for a new generation to go to the moon. We haven’t been to the moon for 50 years; 1972 was the last [manned] moon mission that we had,” Bridenstine said. “And so, the president has given me direction to land humans on the moon within the next five years. That is a big challenge, friends, but it’s a challenge that NASA is up to. … This time when we go to the moon, we’re going to stay.”