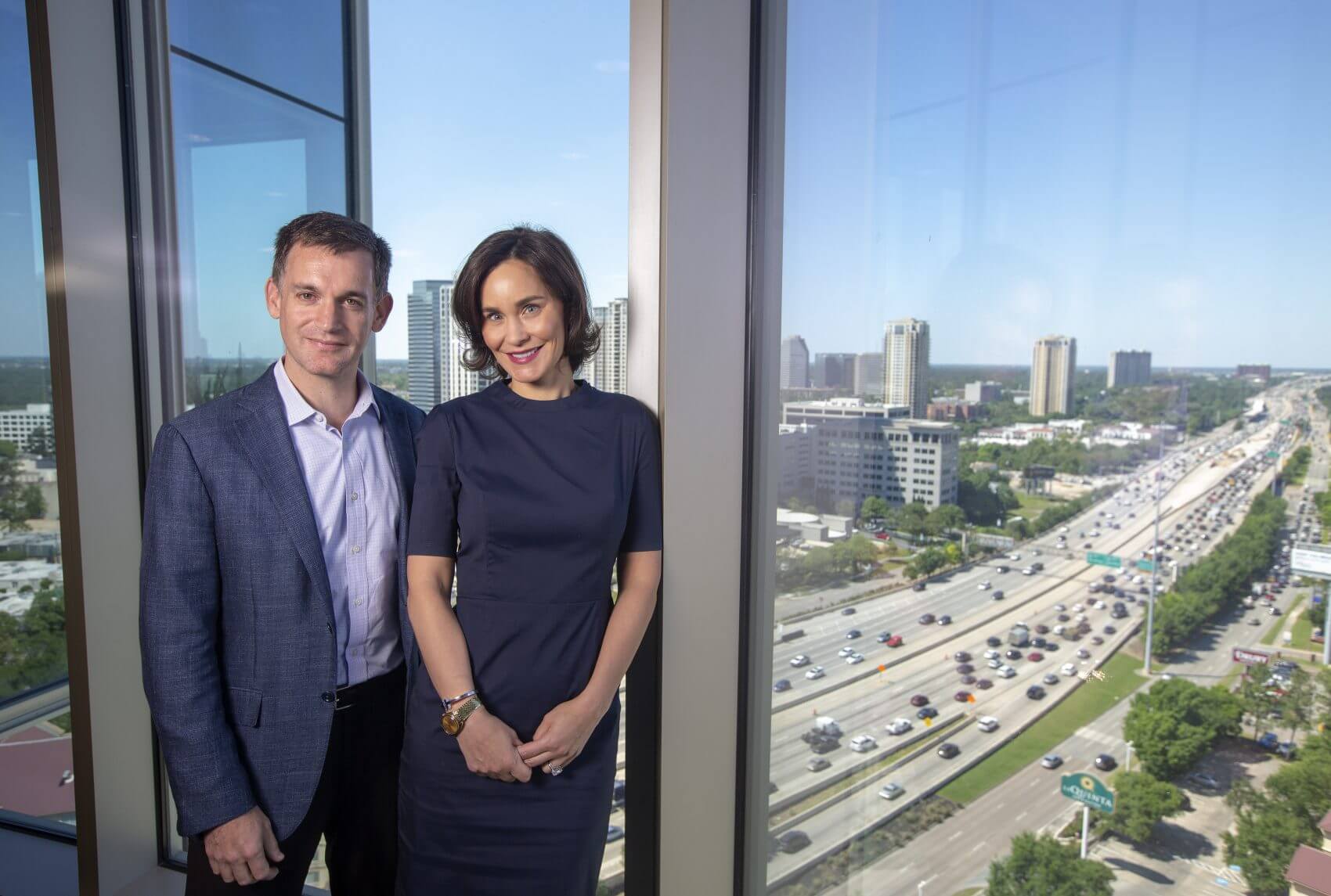 JOHN and LAURA ARNOLD lead Arnold Ventures, a Houston-based philanthropy developing innovative solutions to some of the country’s most persistent problems, from pension underfunding to the high cost of prescription drugs. John Arnold was an energy trader for Enron and then started his own hedge fund, Centaurus Advisors, before retiring at age 38. Forbes estimates his worth at $3.3 billion. Laura Arnold is an attorney and former oil executive.

Q | So, you’re a husband and wife who work together. Do you have separate offices at your Houston headquarters?

LA | We do, but there’s a door between them.

Q | Arnold Ventures, No. 8 on the Chronicle of Philanthropy’s list of top donors for 2018, gave away a total of $204,300,000 last year. At the moment, your philanthropy is focused on four areas—health care, education, criminal justice and public finance—though not limited by these categories. How do you decide which issues to take on?

LA | We’re interested in market failures across the board. The set of criteria we use to think about where we focus is: Is this an area where we believe there is a systemic failure? Do we believe philanthropy could add value in creating alternatives and developing solutions? Is it a good fit for us—meaning, is it in our skill set? We don’t invest in a lot of hospitals, for example. We’re not scientists. We couldn’t add value in cancer research over and above writing a check. But we believe we could add value to pharmaceutical pricing over and above writing a check, because it’s more consistent with our backgrounds and expertise.

Finally, we look at whether or not this is an area where we think bipartisan or nonpartisan consensus could occur from a policy perspective in the near- to medium-term future. The areas in which we’re currently focusing are areas where we believe all those criteria are met and we believe we are uniquely positioned to pursue those opportunities given the current political landscape.

JA | Houston’s been blessed with a number of very generous philanthropists who have funded the hospitals to provide the facilities we have today. But there’s less focus, especially from a philanthropic perspective, on looking at things more holistically: How do we increase access to health care by bringing costs down? We viewed that as a somewhat unique perspective, because health care costs are eating the federal budget. It’s the single biggest driver on the fiscal health of this country long term. It’s eating employers. It’s eating the individual. Compensation is income plus benefits, and the problem is most of the compensation gain has been swallowed up by the cost increase in benefits.

Q | Arnold Ventures is one of three philanthropic organizations that has invested in Civica Rx, a nonprofit hoping to drive down drug costs by collaborating on generics. Catholic Health Initiatives and Memorial Hermann Health System are among the 19 large hospital systems that have partnered with Civica Rx. How will this initiative and others drive down drug prices?

JA | Pharmaceutical pricing is one of the hardest areas because there’s a dozen different problems or inefficiencies in the system. We have this difficulty when we’re talking to politicians because there’s no ‘Do this one thing and it will fix all the problems’ solution. The market is so bifurcated between generics and branded, between drugs that are unique in their class and drugs that have competition, even by the different types of payers—Medicare is very different from Medicaid is very different from private payers or cash payers or the VA. There are problems throughout that whole structure.

But broadly, there’s a whole class of fixes that’s trying to increase competition within the sector. How does a drug shift from being branded and having an exclusivity period to being in the competitive space? How does that shift happen more efficiently and more under the spirit of the current rules? A lot of these rules are 35 years old through Hatch-Waxman [1984 federal legislation that established the approval pathway for generic drug products] so some have become outdated. Industry is getting away from the spirit of the regulation and has created a lot of ways to extend the exclusivity period. We have a whole host of policy proposals on that, about six or eight different things.

There’s a second group of proposals around trying to get rid of some of the poor incentives in the system. We’re talking about the pharmaceutical benefit managers—the PBMs—and some of the bad incentives they have. Maybe they get paid a percentage of the discount between the list price and the net price of drugs, which drives some bad incentives as to how they negotiate and how those drugs are priced to the individual.

LA | With pharma pricing, there is a consensus that there’s a problem. There may not be a consensus on who the culprits are and what the solutions might be, but very few people would argue that the system is optimal. There’s a really powerful grassroots movement of individuals who are patients who can’t afford their drugs. And one of the things that we’re very proud of having done is contributing to galvanizing all those grassroots policies. One of our most powerful grantees and partners in this work is an organization called Patients for Affordable Drugs. It was founded by a cancer patient who has an incurable but manageable form of cancer. He is insured but he saw that his medications cost hundreds of thousands of dollars a year. He started collecting the stories of patients who were similarly situated, of people who had to cut their pills into four pieces because they couldn’t afford a full dosage, or who couldn’t afford to fill a prescription. People who were forgoing food and rent, cashing in their IRAs just to pay for medications. So those voices—and he has brought those voices to the Senate, to the House of Representatives—really bring home the point that this is not a theoretical argument. That this is affecting real people.

Q | What about hidden medical fees? Let’s say a woman goes in for surgery. She finds an in-network surgeon so insurance will cover the operation, but after the surgery she receives a $15,000 bill from the anesthesiologist, who is out-of-network. How do you approach that problem?

JA | We started working on this a couple of years ago. We got some of the health care policy experts to focus on this and funded a number of different people to think about what’s driving the problem and what are the policy fixes. Our grantees have come up with a number of different options. Some are saying there should be a maximum that an out-of-network doctor can charge. Others have suggested that the out-of-network provider should have to bill through the hospital, so the hospital is forced to negotiate, not the individual. Different ideas are debated and vetted and then the best options are delivered to the policymakers. 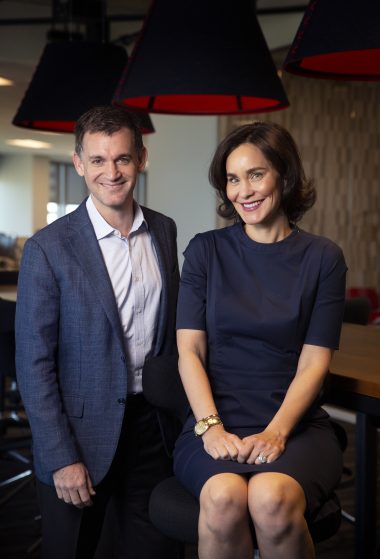 John and Laura Arnold pose in their Houston office.

Q | Arnold Ventures employs about 85 people in Houston, New York and Washington, D.C. What specific qualities do you each bring to Arnold Ventures? Laura, what does John bring to the table? John, what are Laura’s strengths?

LA | John brings a spirit of skepticism. We like to think that the only people who truly are successful here at Arnold Ventures are skeptics, because in philanthropy, most people are super nice and super optimistic, right? It’s a spirit of goodness, a spirit of giving, which is a wonderful thing. But when you do the policy-related work that we do, you are faced with certain brutal realities, one of which is that most social programs don’t work. Changing human behavior is super hard and much of what you try in terms of policy experiments doesn’t really move the needle. So the challenge is to figure out which things do move the needle and why, and to be very clear that don’t work. That discipline is very, very hard for a philanthropist, because it puts you in situations where you’re often telling wonderful people, ‘No. There’s no evidence that your program works.’ John keeps us anchored to the vision that we want to do good, but we will only do good if we invest in things that work.

JA | Most medical research doesn’t work. Most venture companies don’t work. Most policy ideas that we’re working on aren’t going to work. But you have to work on problems that are big enough and ideas that are scalable such that when you find something that does work, it has a real impact. With Laura, I think we have a great complementary skill set. We look at issues from slightly different perspectives; we have different life and career backgrounds. Our approach to a problem or a proposal is a little bit different, so if it passes both our tests I think it’s in a good place. Beyond that, I’ll default into getting deep into the weeds on the very specific technical aspects of a problem. Laura’s great skill is understanding how the broader system works. Whether it’s, How does this foundation as an enterprise function day to day? or What should we be doing as a foundation to maintain relationships with policymakers? She’s always looking at things from a macro stand-point, where I’m very much micro.

Q | You signed The Giving Pledge created by Bill and Melinda Gates and Warren Buffett, which means you’ve committed more than half of your wealth to philanthropy or charitable causes. How do you communicate your values to your three children and also ensure that they will recognize the value of hard work?

LA | That’s the core of parenting, right? Communicating your values. Making your children productive citizens and people who take pride in their work. We try to establish a standard of excellence in our home in terms of hard work and pairing that with empathy and humility. We do our best to give them context and to keep them grounded.

JA | Our intent has always been to give away 99 percent of our worth. What we want to give our kids is not a pile of cash, because when you look back, historically, that hasn’t always led to the best results. What we’re giving our kids is opportunity. We’re able to use our resources to give them an amazing opportunity in life, so we have high expectations as to what they do with that opportunity.

Q | What are your kids interested in? Anybody want to be a hedge fund manager or a lawyer or a philanthropist?

LA | It’s too early to tell. Our one daughter is an artist and an academic. The other two are very athletic and academic—more STEM-oriented.

Laura and John Arnold were interviewed by Pulse editor Maggie Galehouse. The conversation was edited for clarity and length.