A 3D model for global health

A 3D model for global health 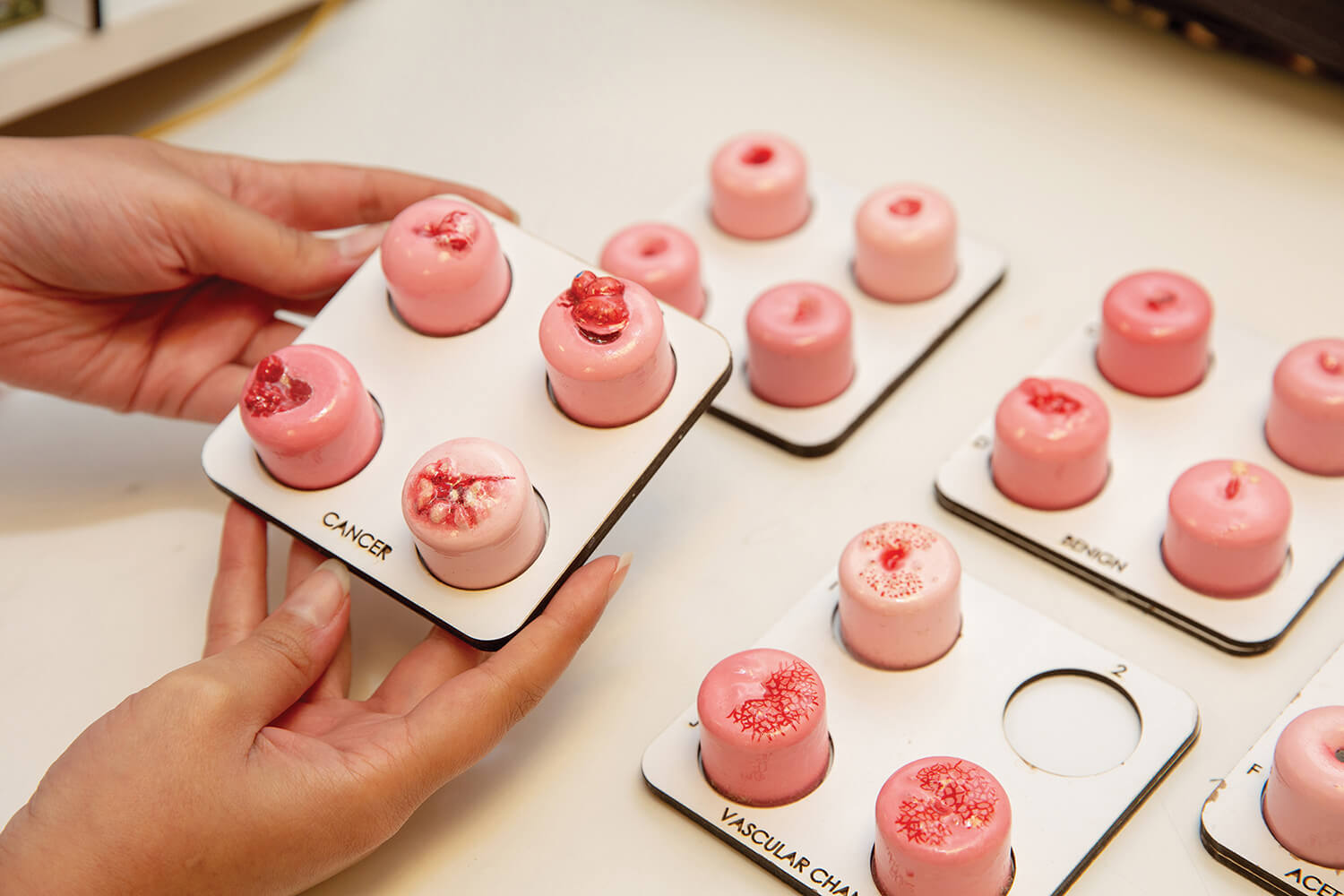 Waheed Mia sits on a bench in Blantyre, Malawi, a tiny paintbrush in his hand. He holds a small cylindrical figure between his fingers, already covered in bright pink paint, and flicks tiny red and white squiggles onto its surface with careful brush strokes. Then he sets it down and starts another. He is satisfied with his work. At the end of the day, the surfaces look just like cancerous and precancerous lesions of the cervix.

Mia hopes they will also save lives.

Nine thousand miles away, undergraduate students at Rice University are busy perfecting another part of that same project, a prototype that they and Mia, along with another student from Malawi Polytechnic, initiated during a summer internship in 2016. Made of 3D-printed material, wood, PVC pipe, water-resistant fabric and foam, as well as easy-to-source hardware, the final product is a low-cost, durable and comprehensive training tool for pelvic examinations.

Known as LUCIA—a loose acronym for “low-cost universal cervical cancer instructional apparatus”—the completed kit includes a standalone “pelvis” and more than 20 3D printed cylindrical cervical models, which allow trainees to examine and detect a range of potential conditions, including cancer. Clinicians-in-training can peer into the model vaginal canal using a speculum, just as they would in clinical practice. Inside, they will encounter one of the cervical models, which fits into a special holder. Eight of the models are designed to change color when swabbed with hot water—mimicking exactly what might happen in an OB-GYN setting during a colposcopy or visual inspection with acetic acid.

“In real life, clinicians put acetic acid onto the cervix and, when you have abnormal areas, they turn white,” explained Kathleen Schmeler, M.D., associate professor in the department of gynecologic oncology and reproductive medicine at The University of Texas MD Anderson Cancer Center and the clinical lead on the project. “We actually use hot water instead of vinegar for the models, and they made the models temperature-sensitive, so there are small areas that will turn white when exposed to hot water, and then the other areas will stay pink, simulating what really happens.”

The prototype is a tool for both practicing clinical screening and also for recognizing when areas are abnormal—as well as treating some of the most common conditions. The team has created additional components for the kit that include gel-based models for practicing biopsies or performing a LEEP, a procedure in which abnormal cells are removed via a small electrical wire loop. The students are also designing tools to allow for the simulation of cryotherapy and thermocoagulation techniques, which are both procedures for removing precancerous lesions.

Sonia Gomez Parra, who earned a Ph.D. in bioengineering from Rice this spring and returns to medical school in August to complete her training in obstetrics and gynecology, mentored the undergraduate students throughout the project.

Multiple clinicians have expressed interest in the model, she said, for training purposes and also for their patients.

“A lot of people have said, ‘You know, this would be really helpful for my patients because, when I talk to them, they don’t know what a cervix is, they don’t know what is happening during a procedure. I can show them with these models exactly what I’m planning to do, what’s going on, and just further educate them on why it’s important that we do these procedures,” Parra said. “Everywhere we go, I’m impressed that everyone is so receptive to it. And everyone wants to buy it.” 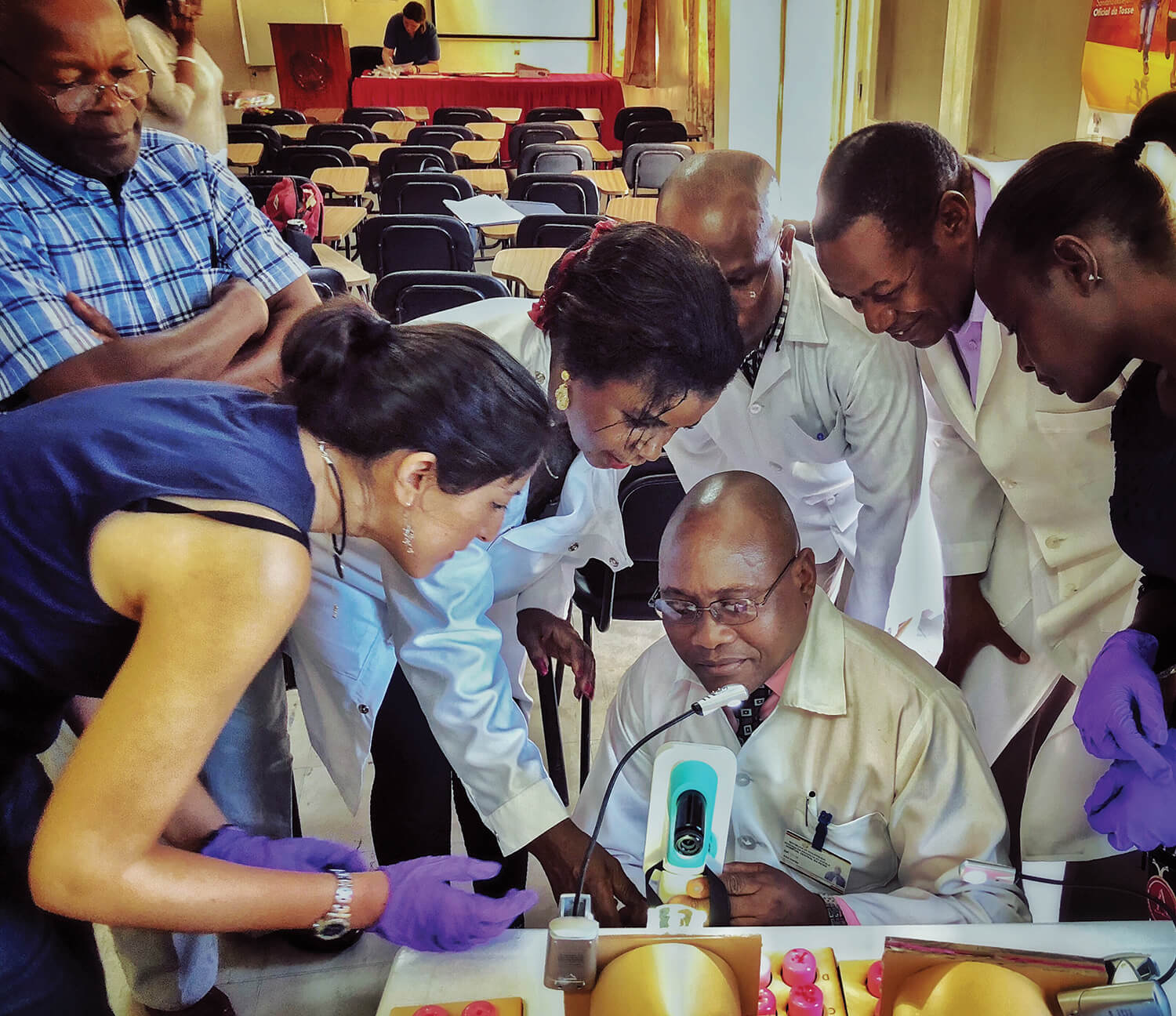 Sonia Gomez Parra, left, who earned a Ph.D. in bioengineering from Rice this spring, uses the LUCIA model during a training course in cervical cancer prevention in Beira, Mozambique. (Courtesy photo)

Worldwide, cervical cancer kills about 300,000 women each year, with approximately 85 percent of these deaths occurring in developing countries, according to the World Health Organization. But if detected early through proper screening, nearly 100 percent of these deaths could be prevented. The problem LUCIA addresses is the widespread lack of clinical providers trained to perform pelvic examinations to screen for cervical cancer. In some low-resource settings, this type of training uses models adapted from animals, which aren’t as effective or true-to-life as the LUCIA model. Other models are prohibitively expensive.

The LUCIA kit was conceived in the Oshman Engineering Design Kitchen (OEDK) at Rice, a workshop that fosters innovative solutions for real-world problems, and the Rice 360° Institute for Global Health, a program that creates new technologies for health challenges in the developing world. Through collaborations with students and clinicians in low-resource settings, Rice 360° works to design tools that are effective but also low-tech and inexpensive. One of the many challenges in solving global health problems is the fact that existing technology often doesn’t work in places with unreliable electricity, scarce resources and sometimes harsh environments. Rice 360° is working to develop alternatives better suited for those conditions.

“This kind of environment is all about reducing barriers for the students to accomplish their design tasks,” said Maria Oden, Ph.D., director of the OEDK and co-director of Rice 360°. “We have a facility where it’s really easy to laser-cut, 3D print, get into the machine shop—so students can try things out and if they don’t work the first time, they are surrounded by tools and people who have ideas, so they can keep improving it over time relatively quickly.”

Oden encourages students working in the OEDK to build low-fidelity prototypes early as a way of communicating ideas and determining— quickly—where those ideas break down.

“We strongly espouse the concept of fail early and often so you’ll have sooner success,” Oden said. “We have so many different kinds of tools and we have a lot of different students working here who have different levels of expertise in these tools, and it opens up a lot of opportunity. LUCIA uses a laser cutter, 3D printer, simple brackets and fasteners and screws and nuts and bolts. All of it was here for the easy taking, so they could try things out. The first few times they made it, the frame wasn’t sturdy enough, but then they were able to get advice quickly and try again.”

Because students are working on real-world problems, Oden said, they feel more invested in their projects.

“Students of this generation really do want to work on real projects, and when they find something they care about personally, they are more motivated to work much harder than they would normally for just a grade,” Oden said.

Karen Vasquez Ruiz, a bioengineering major at Rice who graduated in May, was one of the first students to work on the LUCIA model the summer after her freshman year. She said that the opportunity to focus on pressing global health issues was exactly the kind of experience she had hoped to gain at the university.

“In a lot of classes, we learn so much theoretical stuff and never really know how to apply it outside of class. If you take initiative and join Rice 360° or come to the Oshman Engineering Design Kitchen, you can get involved with projects that are actually making a difference,” Ruiz said. “I really wanted to help with low-resources settings and disadvantaged communities who don’t have access to health care, and Rice 360° has really been the way that I have been able to get involved with that and give back to those communities and address global health problems around the world.”

In the three years since its inception, LUCIA has evolved based on student ideas and feedback from clinical partners. It has been used in trainings in Africa, Central America and even Texas, including the Rio Grande Valley. Schmeler, who is working with the World Health Organization’s initiative to eliminate cervical cancer among other international teaching and training missions with MD Anderson, believes the model could fill a much-needed gap in screening efforts.

“There’s a global push to eliminate this disease, and so there’s going to be a lot of training and education going on over the next decade and this is a great tool for that,” Schmeler said. “The models aren’t any good without teachers, but it makes that teaching easier, more fun, more consistent and more effective.”

In fact, medical schools in Texas have already expressed interest in using the models as part of their curriculum.

“It’s not just limited to low-resource settings,” Schmeler said. “The models are innovative enough and easy enough … . The reality is, I think we can use them anywhere.”

This summer, the team is working to create 50 kits to distribute to medical partners around the world—all hand-painted by artists and engineers in Malawi. The students hope to get additional feedback about how LUCIA can improve and eventually work with a commercial partner on manufacturing and widespread distribution.

“These problems are big, and to solve them we need a diverse group of people and people who think differently,” Schmeler said. “This has really been a collaboration between Rice and Malawi Polytechnic and MD Anderson, and I think that whole idea of bringing together a very diverse team—people from different cultural and educational backgrounds but also their training and professions—has been very valuable.”

The innovative teaching model may seem simple, but it is effective.

“We think that sometimes we need to have these elaborate, complicated or highly technical solutions, but really it’s about filling a need,” Parra said. “I think if we collaborate more, we’ll be able to figure out the most important problems and tailor our skills to that.”