Diagnosed in 2011, the athlete now works to break the stigma of mental illness 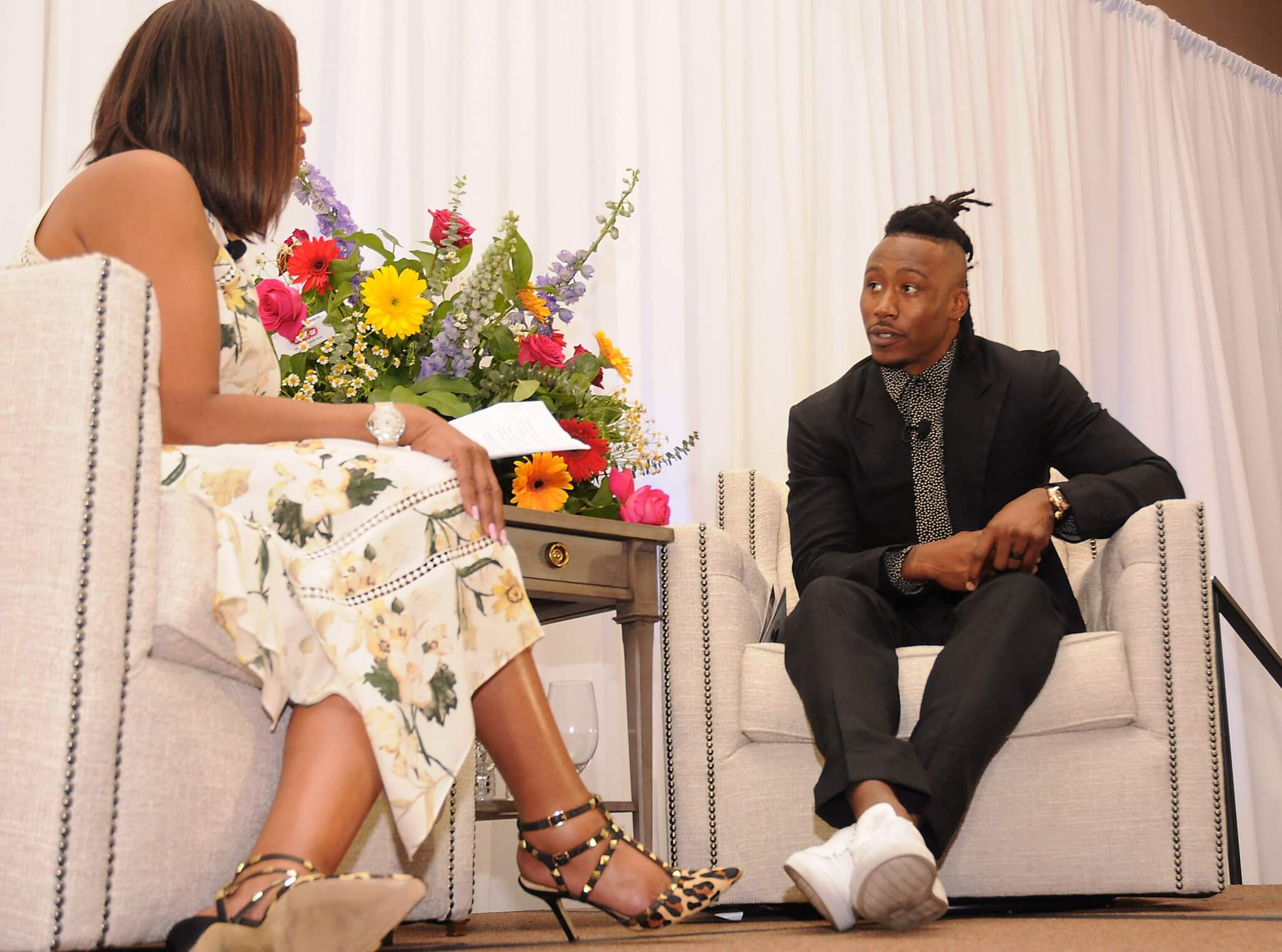 Brandon Marshall has fielded opponents during a storied career in the National Football League with the Denver Broncos, the Miami Dolphins and the New York Jets, but he also has battled mental health challenges for years. On Thursday, he shared his story of living with borderline personality disorder (BPD) with hundreds of guests at The Menninger Clinic’s annual luncheon.

“Borderline personality disorder, or BPD, as we call it, is a brain disorder,” said John Oldham, M.D., interim chief of staff at Menninger and world-renowned expert on BPD. “It can run in families just like diabetes, heart disease and depression, and it can produce extreme suffering, impairment of functioning—especially in tangling up and disrupting relationships with others.”

Oldham went on to explain that it is called borderline because it is exactly on the border of having a major mood disorder or a major impulse control disorder. He says that two prominent features of BPD are emotion dysregulation and loss of impulse control.

The luncheon, held at the Hilton Houston Post Oak, was chaired by Jim Lykes, regional executive vice president of Origin Bank, and his wife, Kate Lykes, chief financial officer at Ascende. Raising awareness and reducing the stigma associated with mental health are personal for the couple. Their daughter, Payton, was diagnosed with BPD and Jim’s father was diagnosed with bipolar disorder in 1971.

“What Kate and I could not understand is why when a child is diagnosed with leukemia, the child is rushed to a children’s hospital where a team is put together to give that child the best opportunity to beat the disease,” Jim Lykes told the audience. “Yet, when a child is diagnosed with a mental illness, the child is essentially told to figure it out on their own. … That needs to change.”

One fun fact about the featured speaker: He’s one of two men named Brandon Marshall who have played in the NFL in the last few years. (The other, Brandon M. Marshall, is a younger linebacker.)

Marshall grappled for years before his BPD diagnosis. After a series of events, Marshall’s agent, Kennard McGuire, told the wide receiver that he had to get help. At McGuire’s urging, Marshall flew to Boston to receive treatment at McLean Hospital in Massachusetts with the late John Gunderson, M.D., a pioneer in the diagnosis, treatment and research of BPD.

“Dr. John Gunderson changed my life, saved my life and now he is working through me to save others,” Marshall said to the audience. “At McLean, I learned that communication was a skill, an art form, that was supposed to be taught. …We didn’t have that growing up.”

For most of his life, mental health to him meant mental toughness—being the tough athlete that everyone expected him to be, he explained.

Now, eight years out of treatment, Brandon and his wife, Michi Marshall, work tirelessly to end the stigma surrounding mental health with their foundation, Project 375. The organization’s slogan? “The way people think about mental health is crazy.”

“We want to take mental health from a taboo topic to an everyday conversation,” Brandon Marshall said. “It is at the forefront of our country and now we need to change the narrative and break the stigma. People are talking about it, but are we talking about it the right way?”

He added that he and his wife have taught their children communication, validation and meditation—which he called “superpowers”—to deal with their emotions.

“Stigma surrounds all forms of brain disorders. It takes phenomenal courage to seek help—to tell your family the thing you have kept secret, to tell your friends and especially to walk up to any podium and tell your story,” the BPD expert said. “But courageous and outspoken evidence like Brandon’s represent the most powerful antidote to the stigma that stubbornly clings to conditions like BPD.”