A leap forward for TMC3

A leap forward for TMC3 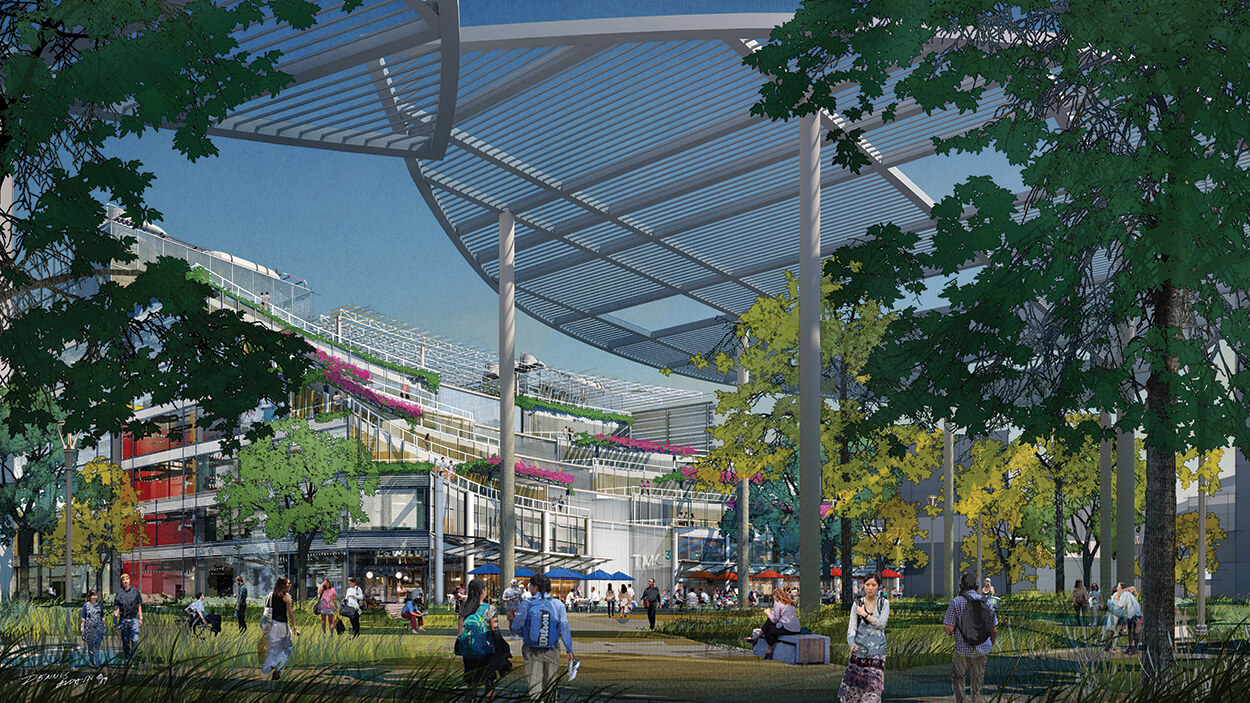 The Texas Medical Center’s TMC3 campus is undergoing critical updates to its design, including the introduction of green space that extends even further across the campus and provides a crucial link within the medical city.

The TMC3 translational research campus, slated to open in 2022, will serve as a nexus between TMC’s clinical and research campuses. Importantly, it will foster “collisions” between doctors, researchers, entrepreneurs and others, facilitating the essential links needed to grow and sustain the area’s innovation ecosystem.

“We didn’t want to create an isolated district—we’re creating a hub,” said architect David Manfredi, CEO of Boston-based Elkus Manfredi, the firm designing TMC3. “It’s the glue that makes the connections between all these places and creates opportunities for unintended collisions. It’s all about the interaction of institutions, industry and startups.”

Elkus Manfredi Architects, Transwestern and Vaugh Construction will serve as the architectural and development team that will design and build the campus.

The 37-acre campus will be located east of Bertner Avenue and west of Cambridge Street, extending from Braeswood Boulevard on the north side to just south of Old Spanish Trail.

“The Texas Medical Center is eager to move forward with a bold, imaginative and dynamic new design vision for the TMC3 Master Plan,” said TMC President and CEO William “Bill” McKeon. “With the combined talents of Elkus Manfredi, Transwestern and Vaughn Construction on board, I couldn’t be more confident that this dream team will flawlessly execute the totality of the project’s vision and fulfill its mission to bring together leading researchers and top-tier expertise from the private sector to create the No. 1 biotechnology and bioscience innovation center in the world.”

Notably, the updated plans call for an elongated green space promenade—known as the “DNA necklace”—that spans the entirety of the TMC3 campus. A series of lens-shaped green spaces will be interlaced with a walkable and drivable street grid, allowing for easy access.

“The most memorable things on many college and university campuses aren’t the buildings but the spaces,” Manfredi said. “We wanted to make great, open spaces that will attract people not just from the Texas Medical Center, but from the entire city of Houston.”

The project will include individual lab buildings and mixed-use space on the ground floor. Situated along the green space will be collaborative facilities, retail and residential opportunities and a hotel and conference center. Parking will be housed underground to optimize the street-level space for walkability, amenities and communal interactions.

The goal is to create a true “live, work, play” ecosystem.

“You can attract talent with great research and facilities, but if you don’t have great places to live and a great social environment, people move on,” Manfredi said.

Elkus Manfredi is a leader in the design of medical innovation space, with a portfolio that includes the original Broad Institute of MIT and Harvard, The Stanley Building at the Broad Institute in Cambridge, Mass., and the New York Genome Center.

The main, shared building at the center of the TMC3 campus will be known as the TMC3 Collaborative. Its upper floors will house shared institutional research space and industry partner facilities. The downstairs atrium, where lectures and other events will be held, will serve as a natural gathering space, where personnel engaged in different types of works for different organizations will interact.

“We’re creating a place where all of the stakeholders come together for different reasons,” Manfredi said. “We want the researchers, we want the industry people and we want the students. This is the place to make those connections.”

The “DNA necklace” will include a series of green spaces, each spanning about three-quarters of an acre. Manfredi said the design accomplishes two important goals. The DNA strand will be an instantly recognizable, iconic image associated with the Texas Medical Center. More practically, the distinct green spaces could be programmed differently. One might be a serene park, another might feature music and performances and still another might host sports like volleyball or basketball.

“People will feel like they want to be there because they’re constantly stimulated—whether it’s breakfast at the coffee place, or a volleyball league in the afternoon or working in a central lab space where the person next to them is doing something interesting,” Manfredi said. “At the end of the day, we’re in the business of attracting and retaining talent.”