Once known as the “woman without a face,” Carolyn Thomas helps other survivors of domestic violence 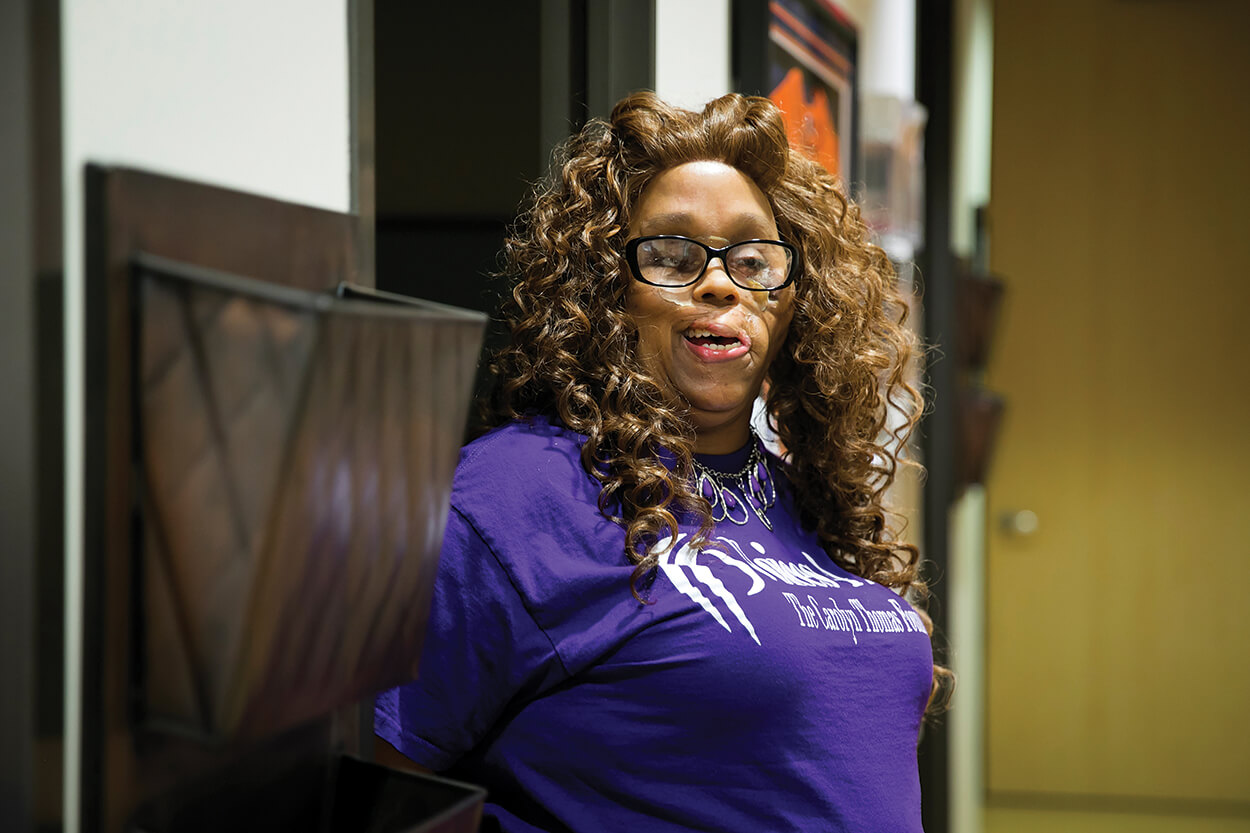 When Carolyn Thomas arrived at the office of Eugene Alford, M.D., for a preoperative visit, he greeted her with a warm embrace. She had driven three hours from her home in Waco, Texas, to see the reconstructive plastic surgeon, a dear friend and mentor.

Alford ushered Thomas into an exam room at the Houston Methodist Hospital Outpatient Center to inspect her face—a face he helped rebuild 14 years ago. 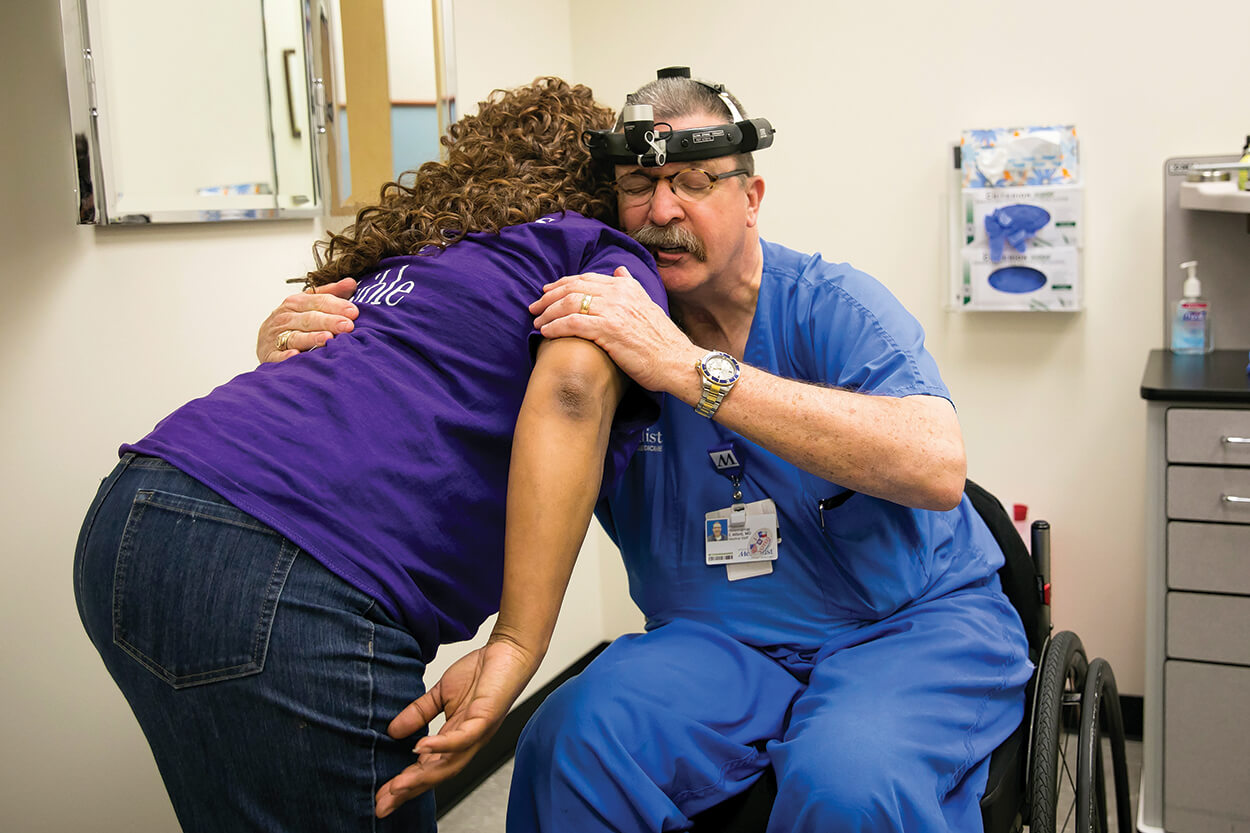 Carolyn Thomas meets with Dr. Gene Alford in his office in the Houston Methodist Scurlock Tower on March 14, 2019, in Houston.

Thomas had an infection near her eye and Alford planned to fix the problem by replacing an artificial bone.

Sitting in an exam room, Thomas, 48, gently peeled off her flesh-colored silicone prosthetic nose to reveal a deep chasm in the middle of her face—a hole where her nose used to be.

It was a stark reminder of the devastating, violent night in 2003 that earned her the epithet “woman without a face.”

‘He was really trying to kill me’

On Friday, Dec. 5, 2003, Carolyn Thomas’ then-boyfriend, Terrence Dewaine Kelly, entered her home in a drug-induced rage—yelling hysterically about someone being in the apartment.

Thomas and her mother tried to calm him down, but to no avail. He pulled out a .44 Magnum revolver, shot first at the ceiling and then again into the floor of Thomas’ apartment. The second bullet entered the living room of Thomas’ downstairs neighbor, who immediately called the police.

Upstairs, Kelly shot Thomas’ mother in the abdomen. He dragged Thomas into the living room, held the gun to her head and pulled the trigger—shooting her in the face at point blank range.

The two met through a mutual friend in 1992 and started dating shortly afterward. There were warning signs early on; he was controlling and didn’t want her hanging out with certain people or dressing a certain way.

Leading up to the shooting, Kelly had smoked a “wet” cigarette made of marijuana soaked in embalming fluid, Thomas said, which can cause hallucinations, disorientation, impaired coordination, paranoia and visual disturbances.

When first responders arrived at the blood-spattered apartment, Thomas’ mother, Janice Reeves, was still alive and urged the paramedics to take care of her daughter first.

Reeves died later that night, the bullet in her abdomen causing irreparable damage to her organs.

At the local hospital, doctors were able to stabilize Thomas and stop the bleeding from her face. Thomas remembers a nurse coming into her room to clean out her wounds. The nurse asked Thomas if she wanted the two people in the room to leave, but Thomas—who did not fully understand the severity of her injury—allowed them to stay. As the nurse carefully unraveled the bandages wrapped around Thomas’ face, everyone in the room gasped.

“Then I knew it was bad,” Thomas said.

The gunshot blast decimated Thomas’ face. She lost her right eye, nose, upper top lip and most of her left side. Virtually 80 percent of her face was gone.

Terrence Dewaine Kelly was sentenced to life in prison in April 2005. At that time, Thomas was wearing bandages around her face to hide herself from the world—only cutting out a tiny eye hole on the left side to see. Going out in public was an emotional roller coaster.

“I scared a lot of kids,” Thomas said. “I would be in the airport and people would stop and point. ‘Oh my God, you don’t have a nose!’ It was really rough at first. People would just look at me.”

Alford first examined photos of Thomas in 2004. As a member of Face to Face, a national organization that helps domestic violence victims receive free reconstructive plastic surgery, he was asked to review Thomas’ case after plastic surgeons in Waco and Dallas declined to operate on her.

Alford knew from the start that he and a multidisciplinary team from Houston Methodist and The University of Texas MD Anderson Cancer Center had a herculean task ahead of them. He had operated on domestic violence survivors in the past, performing cosmetic surgeries to “take away the reminders” of the trauma, but none of the patients was as badly damaged as Thomas.

Over the course of 17 months, Thomas underwent 12 surgeries. She would never look the same again, but she would at least be able to pass what Alford referred to as the “10-foot test.”

“I would look normal to everybody, but if you’re up close, then you’d notice that I had surgery,” Thomas explained.

Alford took bone from Thomas’ right fibula and molded it to create an upper jaw. Then, he used a flap of skin and the connecting blood vessels from the same leg to build the roof of her mouth and gums and blanket the gaping hole in her face. Muscle from the side of her head was transferred to pull up the corner of her mouth.

“There are parts of the body that are meant to be used as spare parts,” Alford said. “The middle three-quarters of the fibula has no function. It doesn’t bear weight. It doesn’t do anything. You need your fibula at the knee and at the ankle for stability, but the rest of the bone in the middle is a spare part. I use cartilage from the ear and the rib every week as spare parts to rebuild parts of the nose and face.”

Anaplastologists from MD Anderson’s Head and Neck Center were recruited to help with the last piece of the puzzle: Thomas’ nose.

The team pored over photographs of Thomas before the shooting and sculpted six models before recreating a silicone nasal prosthesis that closely resembled her nose. After her surgery, Thomas appeared on “The Oprah Winfrey Show,” “Larry King Live” and the 2006 Discovery Health Channel documentary “Plastic Surgery

Before and After: Reconstructing Carolyn Thomas.” She became known nationally as the “woman without a face,” but has since fought for a new identity as the face of domestic violence to help other women in abusive relationships.

In May 2006, Thomas founded Voices 4 All: The Carolyn Thomas Foundation to spread awareness and support victims and survivors of domestic violence.

Thomas considers herself a “visual aid” for her cause.

Thomas is still in awe of her reconstructed face 16 years later. Seeing pictures of herself before the surgery still brings tears to her eyes.

“I just can’t believe how far medicine and science have come. They put 80 percent of me back together—whether it’s a prosthetic nose or a prosthetic eye,” Thomas said. “They put Humpty Dumpty back together again.”

But because surgeons put her back together with artificial materials and parts of her own body that are also subject to age and wear, Thomas knew she would need retouching every 10 to 15 years.

Her recent pre-op visit to Houston Methodist was for the first touch-up surgery since 2006. Thomas will likely require additional procedures in the future.

Because the mucus secretion from her nasal sinus cavity sits in close proximity to her eye, the artificial bone ocuplastic surgeon Charles Soparkar, M.D., had used to create the shelf of her orbital bone during her first reconstruction had become infected and needed revision surgery. On March 15, Soparkar was able to remove the old platform and replaced it with new artificial bone within a few hours in the operating room.

“We knew that from the start with Carolyn,” Alford said. “The hospital didn’t just buy into a series of surgeries. They bought into a lifetime of care for her.”

Alford is proud of his patient, proud that she turned her pain into a source of inspiration for others. 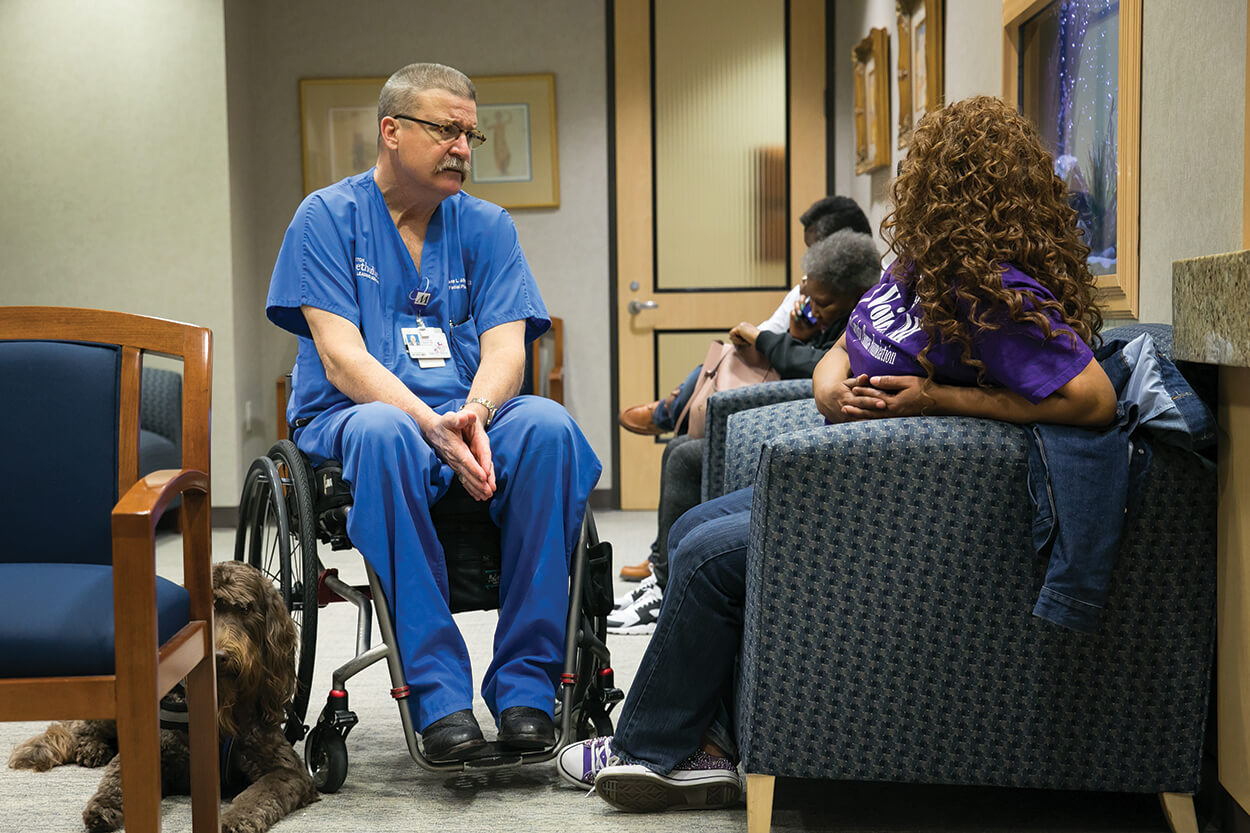 Alford listens to Thomas during her pre-op visit on March 14, 2019.

“She’s actually thriving as a community advocate, being an example of what can happen if you don’t take

charge of your life and do the right thing when it comes to dealing with domestic violence,” he said.

Although Thomas still mourns the loss of her mother and will never forget the shooting, she faces the world with optimism and purpose.

“It made me courageous in a way. I’m stronger than I thought was,” she said. “When I was in relationships with Terrence, he could just run over me and tell me what to do. But now, after going through the surgeries and having conversations with Dr. Alford and people who are positive, I just don’t take any BS anymore. … I  am beautiful inside and out.”

By John Martinez May 8, 2017
Survivor Stories