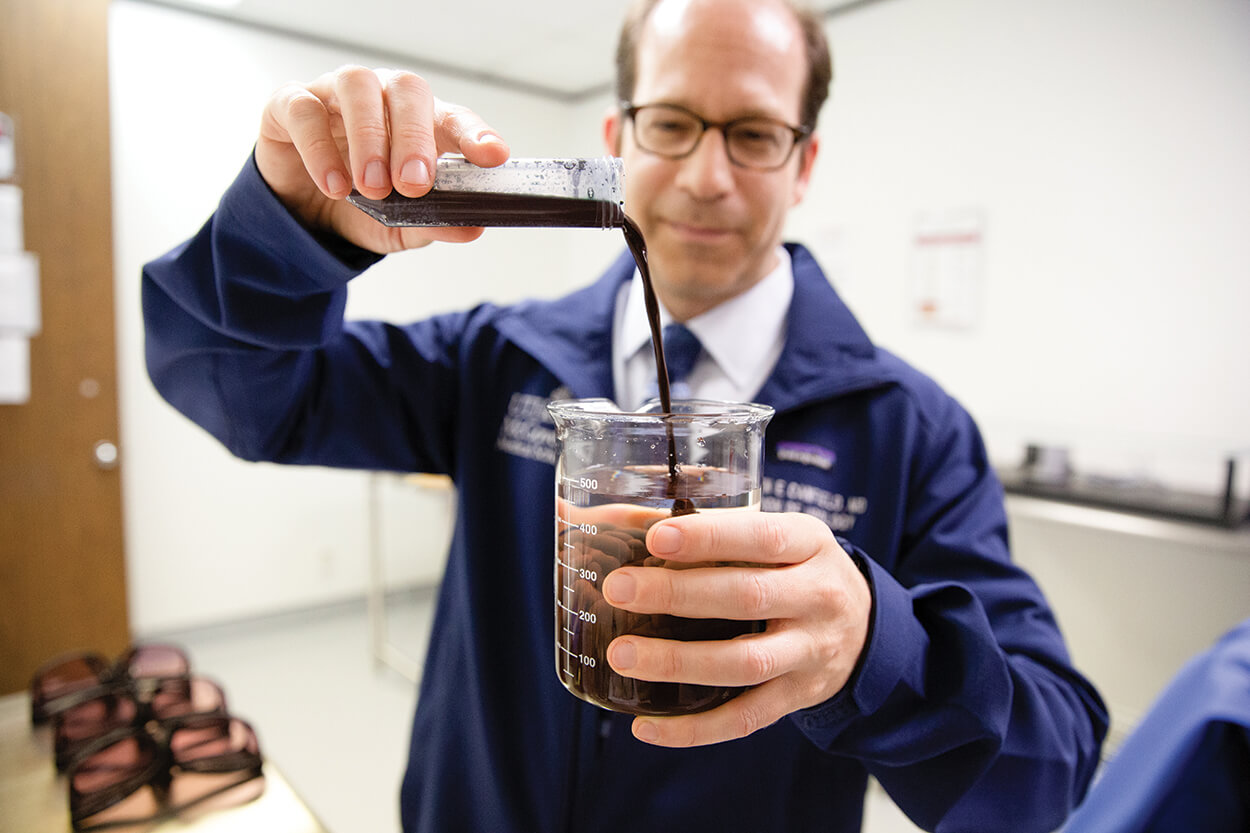 Gold has built fortunes and inspired Olympic dreams, but can it treat cancer?

A team of doctors and researchers aims to find out, with help from patients including local meteorologist Frank Billingsley.

“Gold is a safe material and it has been used in humans for hundreds of years,” said Steven Canfield, M.D., chief of urology at McGovern Medical School at The University of Texas Health Science Center at Houston and Memorial Hermann-Texas Medical Center. “Think about all of the people who have gold fillings in their teeth for their whole life.”

The gold nanoparticles, known commercially as AuroShells, were developed by biomedical engineering professor Naomi Halas, Ph.D., principal investigator for the Halas Research Group at Rice University and Nanospectra. Made of silica glass and wrapped in a thin layer of gold, the AuroShells are about 50 times smaller than a red blood cell and act as tumor-seeking missiles when they enter the patient’s bloodstream. They are the main component in the AuroLase therapy used on patients in Canfield’s clinical trial.

“The particles naturally find the cancer,” Canfield said. “They diffuse throughout the whole body and they deposit in areas that are highly permeable. Anywhere that you have a lot of inflammation, the nanoparticles would deposit there.”

Billingsley, chief meteorologist for NBC-affiliated television station KPRC2 in Houston, was the third patient enrolled in the clinical trial in Houston. He announced his cancer diagnosis on the air and the rest, as they say, is history.

“Dr. Naomi Halas, who invented the gold nanoparticles, saw my story on Channel 2 and said, ‘Get in touch with Frank. He might be a candidate!’ So they did and I was,” Billingsley recalled. “Regardless of whether I was on TV or not, if I had never said anything and they hadn’t heard my story, they wouldn’t have known to get in touch with me.”

For Halas, it was a different Frank who inspired her work to find a less invasive way to treat prostate cancer.

“We found Frank Billingsley as he was in the process of exploring other treatment options,” Halas said. “When I met him, I said, ‘Frank, you have the same first name as my dad,’ so it came full circle. My father, Frank Halas, a prostate cancer survivor, was diagnosed in 2007. He had radiation therapy at age 85 and it is really, really damaging. That is why we are so incredibly excited about this treatment. My dad said to me, ‘If you can prevent just one man from going through what I had to go through, it will be worth it.’”

Before Halas and Canfield contacted him, Billingsley was considering other options to treat his prostate cancer, but they were grim.

“Although prostate cancer is the second-most deadly cancer for men these days, the problem is not really so much mortality as it is morbidity,” Halas said. “People who go through the traditional treatment have just a devastating loss of quality of life.”

Traditional treatment plans include a radical prostatectomy—the removal of the entire prostate gland—as well as radiation and hormone therapy.

“The problem with radical treatment for prostate cancer is removing the whole prostate or radiating the whole prostate along with testosterone suppression therapy has a lot of side effects,” Canfield said. “It can lead to urinary problems including incontinence, sexual problems and impotency—sometimes permanently. Radiation can lead to scarring and bladder and bowel problems, and hormone treatments can make people incredibly tired and have all sorts of other medical complications.”

In stark contrast, the patients in Canfield’s clinical trial are treated with AuroLase therapy. In this two-part process, patients are infused intravenously with a black solution containing the gold nanoparticles (AuroShells) on the first day and sent home to allow the nanoparticles to disperse throughout the body and find the cancerous tumors.

The next day, the patients return for laser therapy.

“This is an outpatient procedure. You don’t have to stay in the hospital; you could theoretically be feeling great the next day,” Canfield said. “That is quite different from surgery. Even with minimally invasive surgery now, there is still going to be a recovery period. With radiation, you are looking at at least eight weeks of treatment, and the smallest time frame of hormone suppression you are going to get is six months. For high-risk disease, you are looking at two years or more, so it is an incredibly different quality-of-life treatment.”

When the patient comes back for the second phase of the AuroLase treatment, laser light is applied to the lesions where the nanoparticles have collected most heavily. Using MRI imaging and an ultrasound device, doctors seek and destroy cancerous areas. To target these areas, a trocar (normally used for laparoscopic procedures) is placed into the lesion and a catheter is inserted in the prostate gland, precisely where treatment is desired. Once the targeted location is identified, doctors remove the cancerous areas with a laser by heating up the nanoparticles to make the gold vibrate and destroy the disease.

The nanoparticles are designed to absorb light in the area of the electromagnetic spectrum called the “near infrared,” the region closest in wavelength to radiation that is perceptible to the human eye.

“The nanoparticles, when you shine light on them, will absorb light very efficiently,” Halas said. “Then they convert the light to heat and they’ll heat in their local vicinity so they have an extremely localized heat source—so they heat only where the particle is placed.”

Billingsley hardly missed a beat after his treatment.

“I had it done on Wednesday, I was at a Christmas party on Saturday and back at work on Monday. It was a quick, easy recovery,” he said.

The worst-case scenario is that the gold nanoparticles undertreat the prostate cancer so there might be a sliver missed—most likely because the lasers didn’t activate those areas, Canfield explained.

That would be a miss and a treatment failure. But you don’t miss the chance to do any of the traditional treatments you had been considering in the first place, he added, and because prostate cancer is so slow growing, nothing is really likely to have changed and you probably removed the vast majority of the cancer even in a failure case.

“At the end of the day, they only put about $6.50 worth of gold in me,” Billingsley said. “It was exciting to be on the forefront of anything in Houston—we are that kind of town. We have the best med center in the country, if not the world. Our space program, our sports programs … I’ve watched them all grow up in 20 years. Television is always on the cutting edge of technology, so the business I’m in is always out there doing something pioneering. To take a chance on something that I thought made sense in a community that I trusted didn’t bother me.”

The clinical trial is being conducted at UTHealth, Mt. Sinai and the University of Michigan.

“Now, all three sites have patients enrolled,” Canfield said. “This first phase of the trial has 45 clinical patients and we are up to 39 patients so we need six more and this trial will end. We have already started to plan for the second trial and that will be, in total, 55 patients. That will be enough for the FDA to start approving us as an available treatment.”

Canfield and Halas hope the AuroLase therapy will be expanded to treat other cancers in the near future.

“I think skin cancer would be an ideal candidate for this treatment. There are lots of ways you can saturate a skin cancer,” Canfield said. “You can saturate it with nanoparticles and you can just activate those by shining a light just over the skin. You don’t have to put it inside the body or anything. Kidney, liver, breast cancer—anything where you can see the area and then place a laser there will work well.”