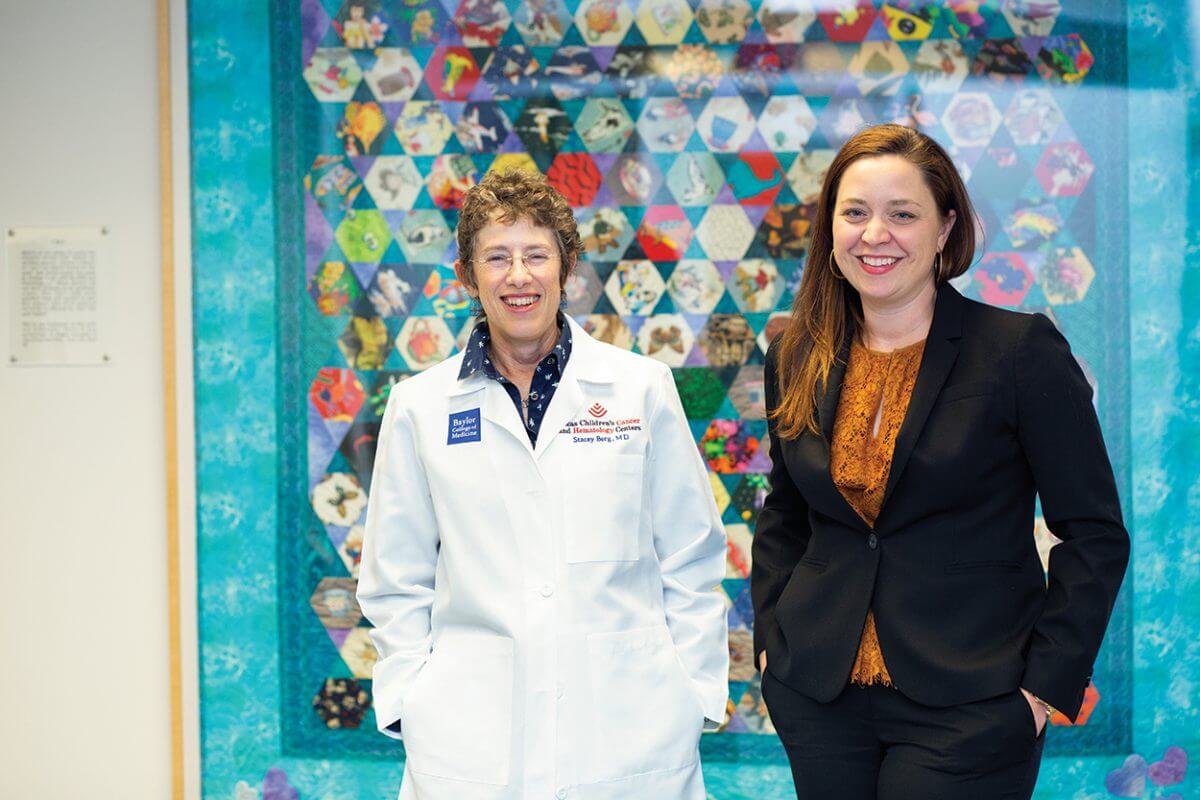 Imagine that a child is diagnosed with cancer. Now, imagine that the lifesaving chemotherapy drugs needed to treat that child are in short supply—and for simple, fixable reasons.

It’s a reality playing out in hospitals across the United States and researchers at Baylor College of Medicine have a solution. In a recent position paper published in the journal JAMA Pediatrics, Stacey Berg, M.D., and Brooke Bernhardt, Pharm.D., called for the development of an essential medicines list for pediatric oncology. Modeled after the World Health Organization’s own Essential Medicines Lists—recommendations that cover the gamut of conditions for both children and adults—theirs is a straightforward call to address what has become an increasingly frequent obstacle to care.

“One of the things that was really appalling when we were working on the paper was how many drugs we use all the time that turned out to be in short supply some time in recent history—I was shocked,” said Berg, a professor and associate dean for research assurances at Baylor College of Medicine.

The reason these drugs are growing scarce is complex, she said.

“For some drugs, the issue is difficulty manufacturing them, or difficulty with supply or with the FDA inspections of the plants. But really, I think the bottom line is economics—not at the level of individual drug companies, but at the level of what we, as a society, say is worth a lot of money,” explained Berg, who is also co-director of Texas Children’s Cancer Center’s Developmental Therapeutics Program. “Old, generic drugs—even though they are essential to treatment of all kinds of health issues—they don’t make a lot of money for people.”

But when it comes to pediatric oncology, old, generic drugs are the cornerstones of treatment.

“One of the reasons that we use old drugs in pediatric oncology is because many of them work great,” Berg said. “Adult oncology tends to use many newer, more expensive drugs because nothing that they’ve ever had worked, whereas in pediatric oncology, there have been increasing cure rates for children with cancer since the early ’70s. Many of our treatments today are still based on those treatments, and it’s not because the field hasn’t advanced, it’s because the treatments are very good and you don’t want to go away from things that work so well.”

New, cutting-edge drugs are continuously being added to therapies to improve outcomes and, as Berg and Bernhardt pointed out, they make manufacturers a nice sum of money and are rarely in short supply.

“In general, you don’t hear about shortages of new drugs for very long,” Berg said. “What you hear about is the shortages of old drugs that don’t have patent protection anymore.”

Bernhardt, an assistant professor of pediatrics in the hematology and oncology department at Baylor, illustrated the issue with numbers.

Baylor and Texas Children’s have set procedures in place to ensure these shortages don’t affect patient outcomes, but it’s no easy feat.

“It’s a chess game,” Berg said. “If there is a shortage of something important, we spend a lot of time moving the pieces so that the patients don’t get affected.”

Texas Children’s has a team ready to make moves when necessary, but not all hospitals have those resources.

“It’s a lot of manpower and it takes a lot of work and a lot of people,” Bernhardt said. “So there’s a lot of interest in coming up with early detection—how, on an institutional level, you can prevent and mitigate the risk to patients.”

Those risks can manifest in delayed administration of lifesaving therapies and, in at least one published case, inferior outcomes.

In a 2012 paper published in the New England Journal of Medicine, researchers found that an alternative treatment for pediatric patients with Hodgkin’s lymphoma resulted in a decreased survival rate. Specifically, when mechlorethamine (Mustargen) supplies ran short, the clinicians switched to the drug cyclophosphamide (Cytoxan) because the medications were supposed to be interchangeable. But Cytoxan was only associated with a 2-year event-free survival rate of 75 percent, as opposed to an 88 percent survival rate with Mustargen.

“No one wants to say, ‘We can’t provide our patients with the very best care,’ so people are leery of raising the issue,” Berg said. “It’s really like any other safety concern. Until you are able to be transparent about what the risks are, you can’t make it any better.”

And this problem isn’t limited to pediatric oncology.

“We see it in critical care, pain management, OB-GYN,” Berg said. “You could find other shortage stories around the medical center of other kinds of drugs where you would say, ‘Are you kidding me?’”

The list proposed by Berg and Bernhardt includes approximately 40 anticancer drugs and 35 supportive care medicines, Berg said. Not all are in short supply, but all are medicines the researchers believe to be essential to a hospital or clinic treating pediatric cancer patients. Their hope is that the list can begin a conversation about shortages and incite policy or industry change that would ensure reliable access to these drugs and forecast shortages far in advance.

“It wasn’t our goal to make the ultimate list. It was to show what it would look like as a starting point,” Berg explained. “The list by itself doesn’t do anything except draw attention, but I think underpinning the idea of the list is the concept that health care, and therefore cancer care, is a right and should be available to everybody.”

So how could institutions or policymakers put that into practice?

Bernhardt said her hope is that manufacturers would work harder to track demands for certain drugs and respond with a more coordinated system for ensuring their output meets those demands.

“When I’ve spoken with drug companies, the gap is with them understanding what the demand is in order for them to make the right amount and for them to know that they’re going to have purchasers of that product,” Bernhardt explained. “If there are 20 companies out there and they’re all making thioguanine, and they’re all making enough for 18,000 children, well that’s too much—we don’t have that many kids with leukemia every year. A perceived surplus may then drive a reduction in production, which can result in shortages. We have to find a way to match the demand with the supply so that we can come to a better price point, which will drive manufacturing.”

If hospital associations provided data to help create forecasting models, Bernhardt said, that information could be shared with regulatory bodies and manufacturers to create a system based simply on supply and demand.

“When you think about countries overseas who say that certain drugs are on their essential medicines lists, they’re taking another step and saying, ‘How much do we have to budget to pay for those drugs?’” Bernhardt said. “That’s something that we haven’t really done as a country because we have so many private pay, cash pay, third-party payers. And when you look at something like CMS [Centers for Medicare & Medicaid Services], a good question to ask is how we can leverage our regulatory framework to help drive manufacturing.”

Legislation likely would be necessary, as well, Berg added.

“I don’t think pharma companies are evil, but they have certain responsibilities that are economic,” she said. “I think we need to make some incentives and maybe some regulation that spreads that burden in some reasonably fair way across the pharmaceutical landscape.”

The supply-and-demand model has worked well for other areas of medicine. The Centers for Disease Control and Prevention works with a multidisciplinary group called the Advisory Committee on Immunization Practices to develop recommendations related to vaccines. Each year, manufacturers can adjust production of the influenza vaccine based on models and predictions for the upcoming flu season.

“This group helps estimate how much vaccine will be used so that the companies know how much to produce,” Bernhardt said. “There’s an expected demand and then there’s a supply that’s produced in anticipation of that demand.”

The problem has a solution, Berg said, but it’s a matter of whether voters, policymakers and institutions are willing to address the underlying issues that are creating these shortages.

“We really need to think in this country about health care and whether we want to be able to say that everybody can get it or not,” she said. “If we say, ‘You know what, we’re just not going to guarantee as a country that every kid with cancer can get adequate treatment’—I don’t know anybody who would be very comfortable saying that that’s our national choice. But the decisions that we make about insurance and payment and drug pricing—those decisions are also making that decision.”