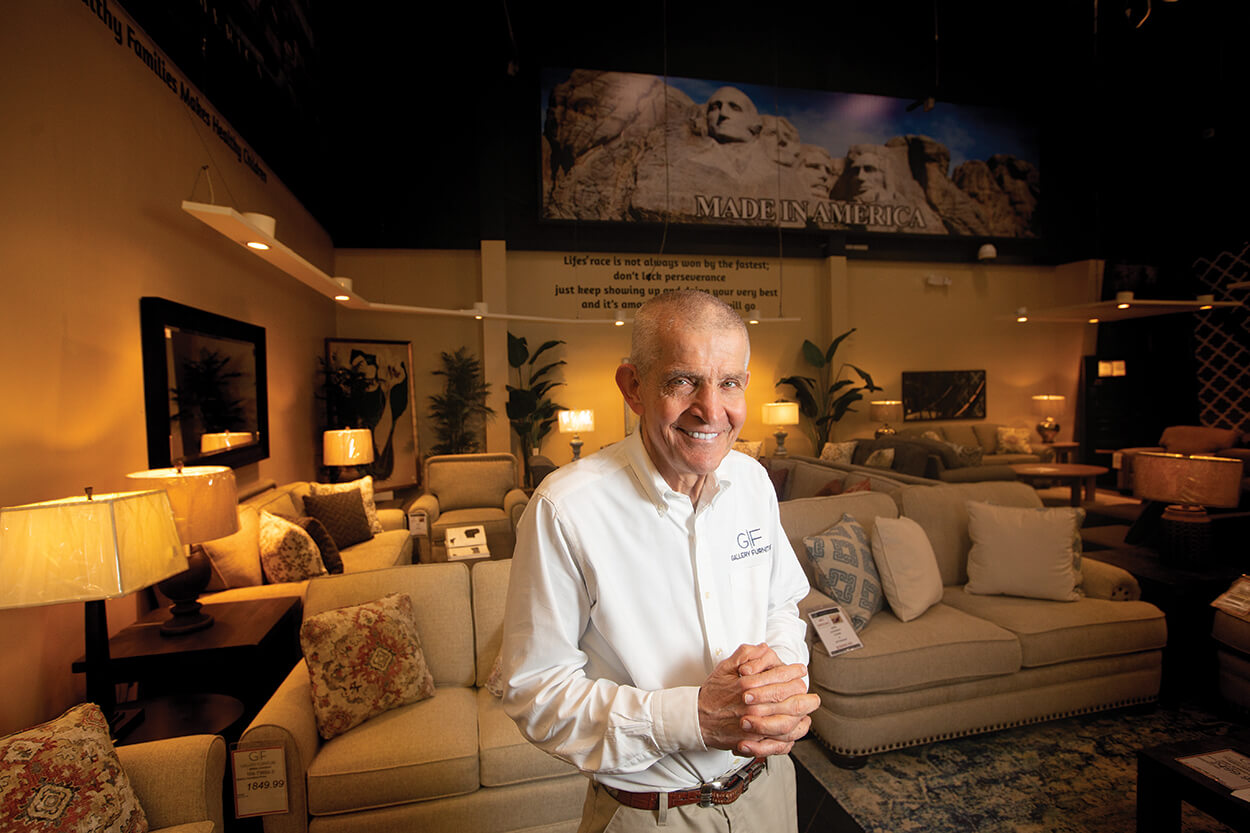 JIM McINGVALE is best known in Houston as “Mattress Mack,” owner and operator of the Gallery Furniture retail chain and star of his own homespun television commercials. But the Mississippi native is also an active philanthropist who has donated millions to numerous charities, community programs and medical initiatives in Houston. McIngvale spoke with TMC Pulse about helping finance the BiVACOR total artificial heart, supporting mental health and opening his store to Houstonians during Hurricane Harvey.

Q | You and your family moved from Starkville, Mississippi, where you were born, to Dallas, Texas, when you were three years old. Then you relocated to Houston in 1981 to open Gallery Furniture. What brought you to Houston?

A | My wife [Linda] and I came down here with $5,000 and the hope that we could make something happen. And, by golly, we’re still here all these years later.

We were working together at this fitness center, and then we were dating. I told her I was going to move down to start this furniture store and I asked her to come with me and help me do it. She said, ‘I’ll only do that if you marry me.’ We got married and here we are. It’s been happily ever after for 38 years.

Q | In 1990, a doctor walked into Gallery Furniture to ask for your help. That doctor was Billy Cohn, M.D., chief emergency resident at Ben Taub Hospital at the time, now vice president for Johnson & Johnson Medical Devices Companies and the executive director of the Center for Device Innovation at the Texas Medical Center. Tell me about your initial encounter with him.

A | I was up here working and this surgeon walks in in his surgical scrubs. He’s got blood all over him. It was Billy.

He hadn’t shaved in three or four days. He says, ‘Hey, we’ve got the new Ben Taub Hospital and the county’s run out of money, so all of the people that are waiting in the emergency room while their loved ones are being operated on are having to sit on the floor. Can you get us some recliners?’ I said, ‘How many do you need?’ He said, ‘We need a whole truckload, 40 or 50 or something.’ I said, ‘Sure, I’ll get them for you.’

I got him all those recliners and we shipped them down there to Ben Taub, but they wouldn’t take them. They didn’t have hospital foam in them, so they weren’t flame retardant. That’s why I remember the story. They sent them back to us. He called very apologetic. We called and ordered them with hospital foam and got them back down there to him.

Q | You encountered Cohn again in 2008 when your brother, George, was suffering from congestive heart failure.

A | My brother was very sick, and I was down there at St. Luke’s to have a meeting with Dr. [Bud] Frazier about how they were going to save my brother’s life. Billy walked in with Bud.

I would be down there visiting my brother at 12, 1, 2 o’clock in the morning after I got off work, and I’d be kneeling by his bedside. Even though he was in a coma, he knew I was there because we were very close. And Bud would come in there and check his charts and nurture him.

Q | Frazier and Cohn wanted to work with Daniel Timms, Ph.D., creator of BiVACOR, a next-generation total artificial heart designed to replace the function of a patient’s failing heart. You decided to invest $2.1 million to bring Timms from Australia to Houston. What motivated you to get involved with BiVACOR and the team?

A | At the end of the day, it’s all about patients. If we can do something through BiVACOR that helps people live longer, healthier lives and get back their quality of life, then I’ve done something good for the world. I’m not going to be here forever, so my wife and I both want to try to leave a legacy.

What we need is somebody to invent a battery that can power this artificial heart through the skin without having to have wires coming out, because those wires cause infection and they limit a person’s lifestyle. If any aspiring entrepreneur at the Texas Medical Center wants to invent a battery that can power that heart through the skin, let me know. That would be a great movement forward in the BiVACOR artificial heart business.

According to Billy and Bud, in the next year or two, they can get it implanted in a human and we’ll see what happens. Lots of history at the Texas Medical Center and, thanks to Daniel Timms, Dr. Frazier and Dr. Cohn, hopefully they’ll make some more.

Q | Your daughter, Elizabeth McIngvale, Ph.D., serves as an assistant professor of psychiatry and behavioral sciences at Baylor College of Medicine and is an active mental health advocate who was diagnosed with severe obsessive compulsive disorder (OCD) when she was 13 years old. At the time, some doctors said her condition was too severe to be treated. How did you respond to that?

A | My wife and I are eternal optimists. One way or another, we weren’t buying the prognosis that our child would never amount to anything, that she would never graduate high school, that it was best to put her in a mental institution for the rest of her life. We weren’t buying that and we were going to find a way.

I talked to the people I knew at the Texas Medical Center. Linda searched the internet and we finally found a lady who recommended The Menninger Clinic, then in Topeka, Kansas. We took Liz up there and she went to six or eight weeks of intensive therapy, then came back to Houston and had another relapse. By that time, Menninger had moved to Houston.

It’s been a long journey, but we learned a lot and, knock on wood, she’s doing well, although she continues to battle the mental illness every day.

Q | What were some of the most difficult experiences you remember as she was struggling with her condition?

A | Her being suicidal was extremely tough on the whole family—especially on her—and for her to be unable to control those rituals and compulsions that she knew made no sense and were illogical, but she had to do them anyway because of mental illness. All that was extremely tough. But you know, we’re people of faith and you’ve got to keep the faith. You’ve got to just keep believing. We all want to be life forces for good,

and my life force says that the good Lord never sends any of us anything we can’t handle.

Q | How do you determine which issues and organizations to support?

A | I think the majority of people, when it comes to philanthropy, probably give to things that have affected them personally. My beloved brother and my father both died of congestive heart failure, so that’s why I’m involved in BiVACOR. I’ve had some mini strokes and this and that, that’s why I’m involved with the Mobile Stroke Unit, which is a partnership between UTHealth and Memorial Hermann-Texas Medical Center. At the same time, we give a lot to education and things that we deem are good for the city, good for the state.

Q | You opened Gallery Furniture to victims of Hurricane Harvey. What was going through your mind when you decided to offer up your business as a massive crashpad?

A | I was up at the front desk and the phone was ringing off the wall and the emails were exploding and the text messages were ding, ding, ding—nonstop, people saying, ‘Come rescue us! We’re going to drown!’

We’d done a pretty good job of preparing for the hurricane by having all these big trucks here get through a lot of water, but what we hadn’t prepared for was the fact that none of our employees could get to work because they were all flooded in, too. I did a Facebook Live and put out a notice we needed people with commercial drivers’ licenses to come drive these trucks and rescue people.

They came in and we sent them out. We had to get in the game real quick. There wasn’t a lot of planning. That’s the way I was brought up: Do the right thing and worry about the cost of whatever later. And that’s what we did.

We were all energized, the ones of us that were here doing it, by the courage of the people that we brought in. They waded through four to six to eight feet of dirty water to get here and they were devastated, but they had a good, positive attitude. You saw the strength of the human spirit.

Q | What is your most poignant memory from that time?

About 2 o’clock in the morning, the door opened and this little girl came in with her people—I believe her parents and her uncle. They were all four just sopping wet because they had waded through three or four feet of dirty water on the feeder road. She was the only one out of the four who spoke any English. She saw me up there, but she was afraid to come up to me. Finally, I motioned for her. She’s wet and hot and traumatized and dirty and scared to death. Now she’s freezing because she’s in this cold furniture store and her little teeth are chattering.

She comes up to me and says, ‘Can we stay here tonight?’ That was it.

It was a no-brainer. That’s the way I was brought up. You worry about people, not about money. Money, you can make some more tomorrow, but people, you only get one shot.

Q | It’s clear that you care very deeply about Houston. What do you love most about the city?

A | I think the fact that nobody in Houston asks you where you’re from or what your educational level is. Houston gives everybody an opportunity to do well. All Houston ever said to me was, ‘Kid, here’s a chance for you. A chance to succeed, a chance to fail. It’s totally up to you how hard you want to work to succeed.’ And I think that’s the story of Houston. We’re multicultural, multiethnic and anybody can succeed in Houston if they want to roll up their sleeves and go to work.