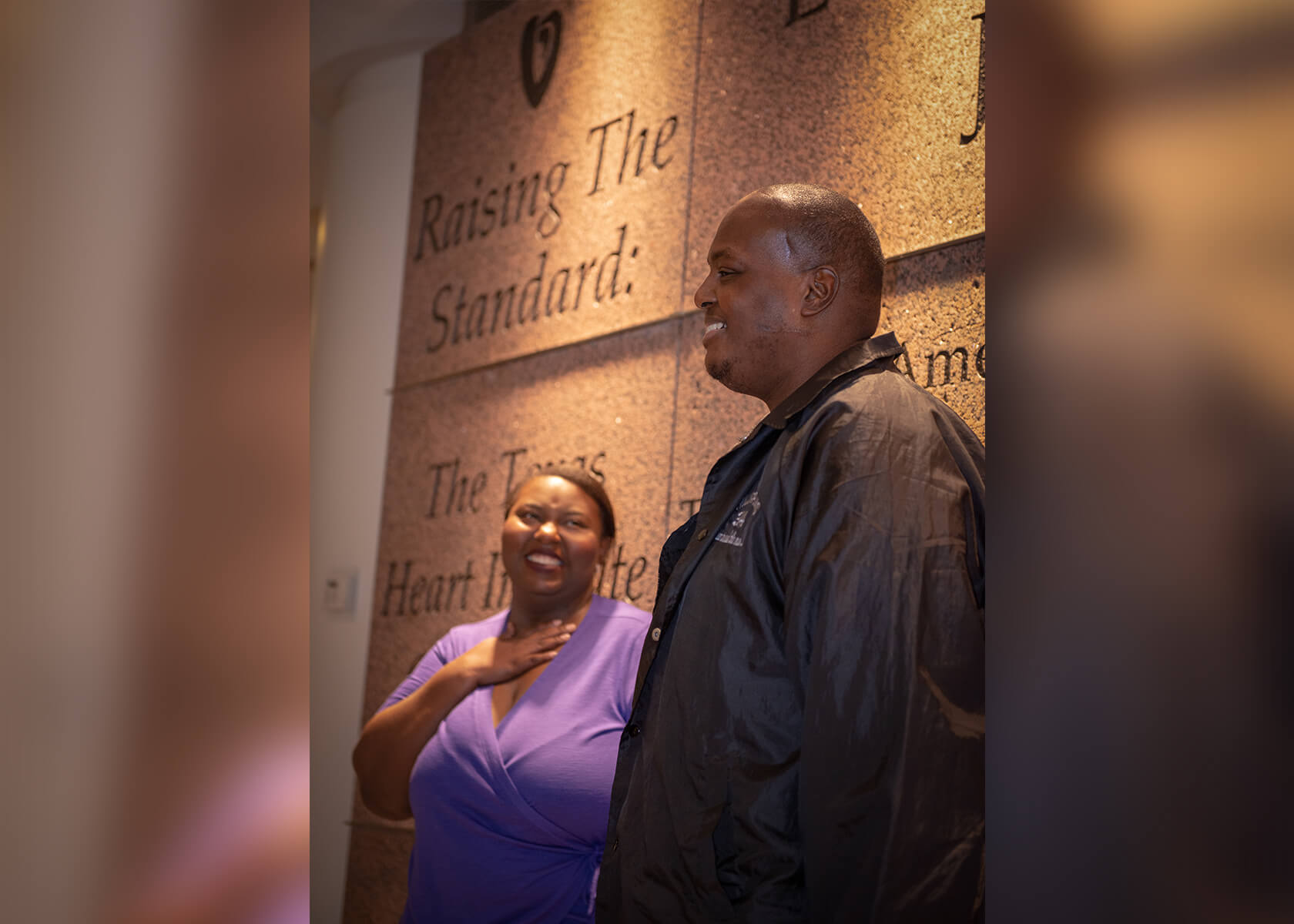 A decade ago, gospel singer Otis Wimberly was sidelined from his usual full-throated, energetic performances.

His arms and legs had ballooned. He could barely walk a few steps without stopping and gasping for five or six deep breaths. No matter how much he wanted to lie down, that wasn’t an option because “it felt like I was drowning,” he said.

The symptoms and a subsequent diagnosis of congestive heart failure meant the Humble, Texas resident couldn’t fully participate in The Wimberly Family Gospel Singers, which was founded in 1976 in New Orleans. Over the last four decades, the group has delighted listeners at local churches, concerts and music festivals, including the inimitable New Orleans Jazz & Heritage Festival (Jazz Fest).

“I couldn’t sing. I couldn’t play,” he said, with a timbre of disappointment in his deep, mellifluous voice about an interruption of decades of music.

Approximately 5.7 million American adults suffer from heart failure, with about half of them dying within five years of being diagnosed, according to the U.S. Centers for Disease Control and Prevention.

During his childhood in New Orleans, Otis Wimberly and his brothers would sneak upstairs to play their father’s guitar while the patriarch was at work and their mother was cooking downstairs.

“My mom caught us one day. She came upstairs and said, ‘I thought I left the radio on. That was y’all playing?’” Wimberly said. “Every day, when my dad left, she had us practicing.”

When the elder Wimberly heard them play, he was astonished by his sons’ natural musical talent and immediately purchased a trailer full of music equipment.

“We’ve been singing and playing ever since,” Wimberly said.

WATCH OTIS WIMBERLY sing lead on “The Lord Will Make a Way Somehow” while wearing his LVAD in 2018:

A new lease on life

Weeks, years and decades of singing came to a halt for Otis Wimberly in 2008, when pain caused him to seek treatment and medication. Still, his condition worsened.

By the time he became a patient at the Texas Heart Institute in the Texas Medical Center, his heart’s pumping ability was at just eight percent.

“He was really out of it—just barely fighting to live,” said his wife, Shannon Wimberly.

During a July 2011 surgery at Baylor St. Luke’s Medical Center, prominent heart surgeon O. H. “Bud” Frazier, M.D., connected Otis Wimberly’s failing heart to a left ventricular assist device (LVAD). The implanted pump, which whirls instead of beats, takes over cardiac circulation for a patient who has end-stage heart failure as a bridge to a transplant.

“I was really in a bad place,” Otis Wimberly recalled. “Too weak to have the surgery and too far gone not to.”

The pump gave the gospel singer a new lease on life. Everywhere he went, he carried a bag containing two batteries and the controller for the LVAD. It was cumbersome and earned him the nickname “battery man” from his family and friends, but—compared to heart failure—the LVAD was exactly what he needed while he waited on a new heart.

He even rejoined his family group, making a powerful performance at Jazz Fest in the spring of 2018 wearing his gear in a backpack.

Shannon Wimberly had turned in for the night on Oct. 17, 2018, as her husband nestled in his chair in the living room to watch the latest episode of the CW’s The Flash. Then, his phone rang. Doctors finally had a heart for him.

“We got the call,” Otis Wimberly said. “I tell ya, it was exciting.”

They grabbed clothes and other necessities they had prepared for this moment. Too excited and nervous to drive, so they called his daughter, who lived nearby, to take them to the hospital.

The next evening, two days before his 53rd birthday, Otis Wimberly went into surgery to receive his new organ.

Over the course of four hours, Frazier and his team opened the gospel singer’s chest and carefully removed the mechanical pump with its valves and lines. Then, they took out his weakened heart and replaced it with a healthy one.

After seven years, Otis had a heartbeat again.

“You really can’t top that as far as birthday gifts go,” his wife said.

Otis Wimberly doesn’t know much about his donor—other than that he was a young, male athlete in his 20s—but he’s already thinking about what he would say to the donor’s family.

“I would first give my condolences on the loss,” he said. “Then I would let them know that a part of their son is alive in me.”

April is National Donate Life Month. The demand for organ donations far exceeds the available supply. Today, 113,727 patients are waiting to receive a new organ. According to the U.S. Department of Health and Human services, another patient is added to the waiting list every 10 minutes. Each day, 20 people in the United States die waiting for a transplant.

“One of the problems that we’ve had as the population grows is that we have fewer donors. Of course, that’s good because we have fewer deaths from car accidents,” Frazier said. “All those are good things, but if you need heart transplant, it’s not. … You have to depend on someone else’s misfortune to get a heart. I’d like to see that day come to an end.”

Being able to “have these pumps that we can just pull off the shelves” to replace the heart, as Frazier puts it, is a goal he is actively working on. For years, Frazier has been collaborating with fellow Houston heart surgeon and medical device inventor William “Billy” Cohn, M.D., and biomedical engineer Daniel Timms, Ph.D., on the BiVACOR, a next-generation, total artificial heart that could replace heart transplants.

It will be a few years before the BiVACOR is available, but in the meantime, patients—like Otis Wimberly—are alive today thanks to the LVAD.

“Seeing him at his weakest moments and watching him progress, become stronger and do better did my heart all the good,” Shannon Wimberly said.

The Wimberly Family Gospel Singers are scheduled to perform in the Gospel Tent at this year’s Jazz Fest on April 25.