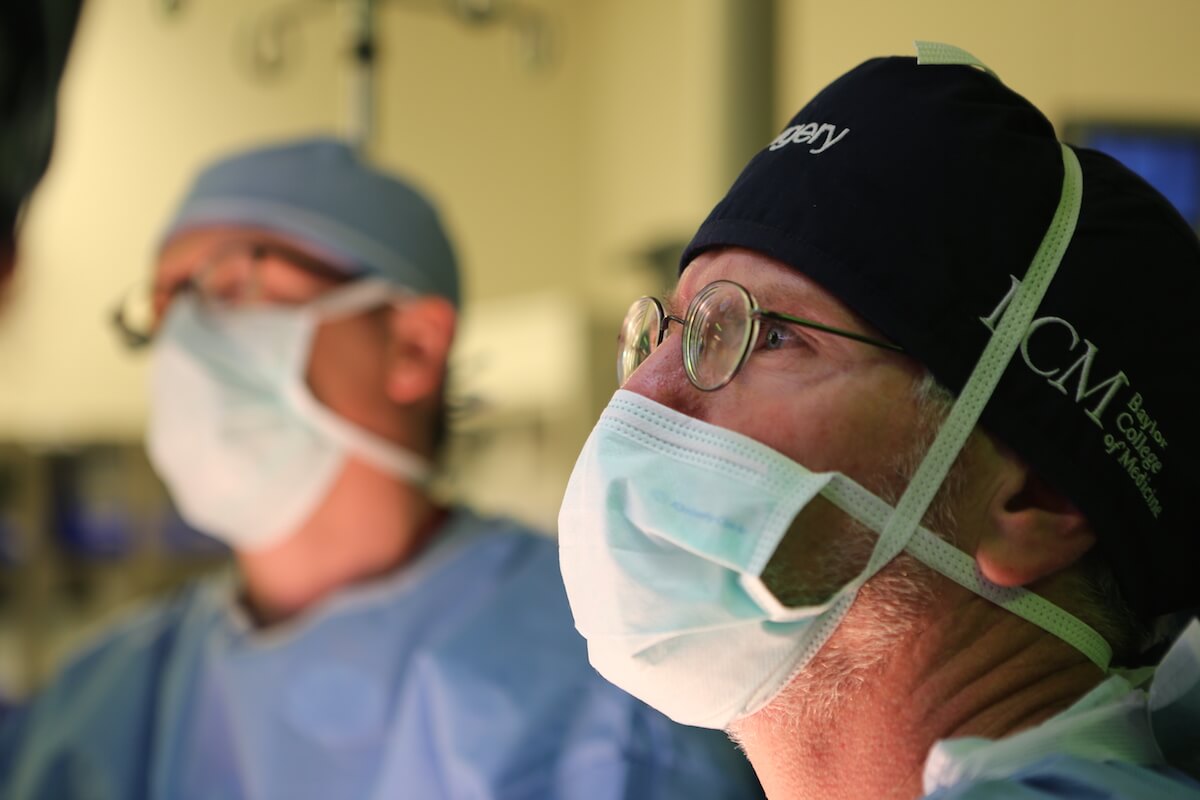 TMC: In 2014, a multidisciplinary team at Texas Children’s Hospital became the first in the nation to perform a fetoscopic neural tube defect repair surgery, which addresses spina bifida, through two 4-millimeter incisions in the uterus. You pioneered this technique. What sets this procedure apart?

Belfort: A lot of this came about from our collaboration with teams in Barcelona. They were doing surgeries on animals with a single port and we went and watched what they were doing. When we came back here, we started thinking that we were not going to be capable of doing this with one port, but that we didn’t want to do it like others using four ports. The problem is: When you make a hole in the membranes, it doesn’t heal because the membranes don’t have blood supply, so they’re going to leak a little bit. With four ports, we were seeing that these mothers were going into labor very early—delivering their babies very early—so even though they could do the repair, they were having very preterm babies. We didn’t want to do that. We wanted to improve the situation for mothers and get the same repair that everybody else was doing. We wanted to get good neurologic results without sacrificing the fact that the mother could have a vaginal delivery and without sacrificing—for the baby—a term delivery, which we really value.

Nobody who does laparoscopic work does it through two, because it’s just too difficult. So Dr. William Whitehead, who I credit with a huge amount of our success, was one of the very few neurosurgeons in the world who agreed to learn this technique. We spent hundreds of hours in the procedure room downstairs practicing with a plastic kickball and with a doll that we sewed some chicken skin on and we simulated a neural tube defect and then we worked out our technique in the simulator. Then, we went back to Barcelona and we did it in some sheep. And we showed that we could do it. And then we came back and we did it on a little boy named Grayson Canezaro.  As I’ve said before, I really credit his family with being some of the bravest people I know. I said to his mother, ‘You know you’re going to be the first in the world to have this technique done,’ and she said, ‘Someone has to be the first,’ which is just incredibly brave.

TMC: You keep a sketchbook where you draw different concepts for tools you’d like to create and procedures you’d like to perform, some of which have been developed. What are you currently working on and when does inspiration strike?

Belfort: When I have ideas, I draw them and we’re starting to make some of them. There is one needle I want to name after a little baby who died and I told his family that when we get this procedure right, I will name the device after him. His folks still contact me every year on the anniversary and send me a picture of their family. There’s another idea I’m working on that could change a lot more than just fetal surgery. It could be an entire new suturing system. We’ve actually got a company building a prototype and we’re working on that one. I most often have inspiration in the shower or on runs. I’ll be running along and the all of a sudden it’s like, ‘Oh!’—and then I’ll stop and write a little note in my phone.

TMC: You’ve helped create two new surgical techniques to prevent massive blood loss when treating women with placenta accreta, a potentially life-threatening condition in which the placenta grows too deeply into the uterine wall and often leads to severe hemorrhage after delivery. Can you tell me more about these methods?

Belfort: One actually came out fetal surgery. One of the things that we do in fetal surgery is staple the membranes to the wall of the uterus because we realized that when you’re going to open the uterus and close it again, the last thing you want is a whole lot of bleeding. So, then I started thinking: The last thing we want in a placenta accreta case is a whole lot of bleeding, so why don’t we adapt this technique and start to staple the uterus here? So that’s one thing that we’ve done and that’s worked extremely well. You actually start the hysterectomy having lost just 25 ccs of blood versus up to 1,000 ccs with a normal C-section. Many of our patients with accreta don’t even get a blood transfusion, so that’s a big difference.

The other thing we do is we started using a device that was designed to help suture bowel together called an EEA sizer. It’s basically a metal rod with a ball on the end. Part of the problem in this surgery is that we don’t know where the uterus ends and the vagina begins, so we put this into the vagina and then from the abdomen we’ll be able to feel where that ball is and open the vagina posteriorly in those cases where we have no access anteriorly.

It’s about having an open mind to innovation. To being ready to consider all ideas, even the crazy ones, and have the person who comes up with the idea feel that they’ve been heard. It’s a team component and it may be a medical student. I don’t care who it is who comes up with the idea—if it’s a good idea, it’s a good idea. And that’s the culture that we’re breeding within this fetal center. 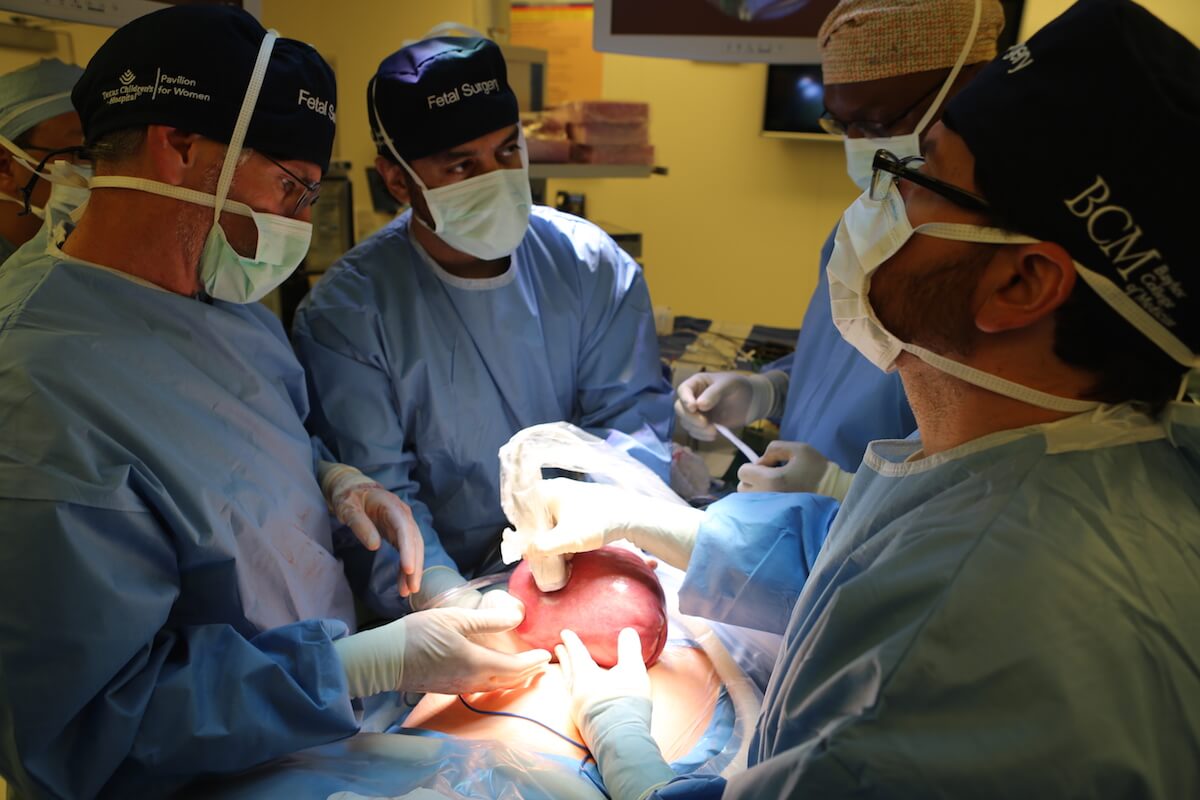 TMC: As you know, the maternal mortality rate in this country is alarmingly high. In your opinion, what is the most important action hospitals can take to reduce these preventable deaths?

Belfort: There are a few, but the single most important one is to increase the awareness that this is a real problem. This is a public health issue and women and their health during pregnancy is not being given the attention that it should. This is a disparity issue—it’s a disparity between males and females and it’s absolutely a racial disparity because African American and Hispanic women are dying at greater rates than Caucasian women. So, this is a racial equity issue and it’s a very big issue. From the medical part of this, I have been someone who thinks that transparency and oversight are really important and that hospitals should be mandated to publish their results and that the state and federal government should be overseeing and actively looking into the question, ‘Why are these women dying?’ And, yes, there are a lot of initiatives, but when you get into the nitty-gritty, there are also a lot of conflicting interests where some people might lose if data about their hospital, their system, their approach—whatever—becomes transparent. And so, like anything, it becomes political and that’s a shame because people are dying. I think it is a huge, national shame that we have the maternal mortality rate that we have and I think there are good people who are trying to work through this and we should support them. 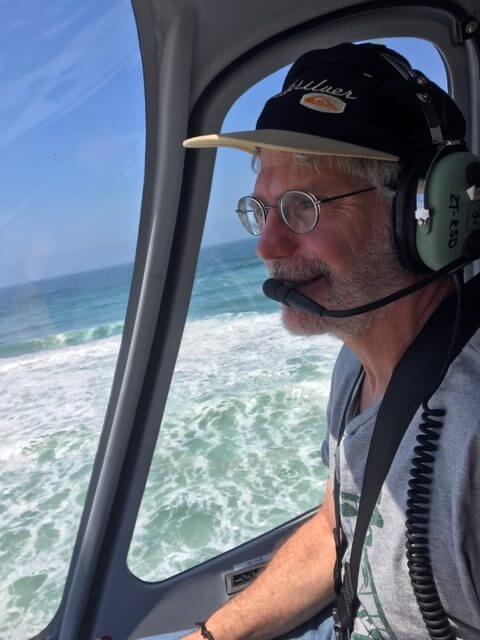 TMC: I hear you fly helicopters. What drew you to aviation and what’s your favorite flying experience?

Belfort: I fly airplanes, too. I have a commercial fixed-wing license and I own a multi-engine airplane. I fly it a lot around Texas and, when I have business, for the hospital. If I’ve got business in San Antonio or Austin or wherever, I’ll use my plane. I love everything aviation. I was fascinated by helicopters—and they’re difficult things to fly, much more difficult than an airplane—because they require both feet and both hands all doing different things at the same time. And then you’ve also got to be multitasking because you’ve got to manage the radios. In the end, it becomes a reflex like anything else and your body just does it, but when you first start, you can’t just let go in a helicopter. In an airplane, if things are going wrong, often all you’ve got to do is just take your hands off and the plane will right itself. In a helicopter if you do that, it will just spin out of control.

My favorite adventure so far has been flying along the coastline of South Africa looking for great white sharks. We didn’t see any, but we saw some whales. Also, in the mountains, we did a pinnacle landing on top of a snowy mountain. Normally when you’re landing, you’ve got a flat surface and you get what’s called ground effect. But on a pinnacle, you’ve got to be really accurate and you’ve got to be very gentle, because if you make any kind of mistake, you can go down the mountain. I love the challenge. 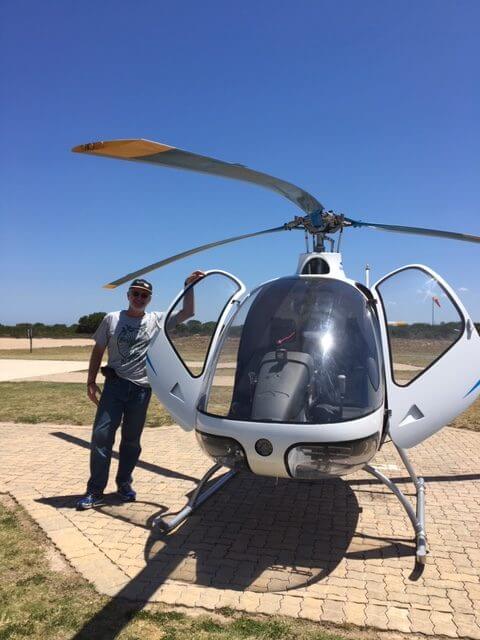