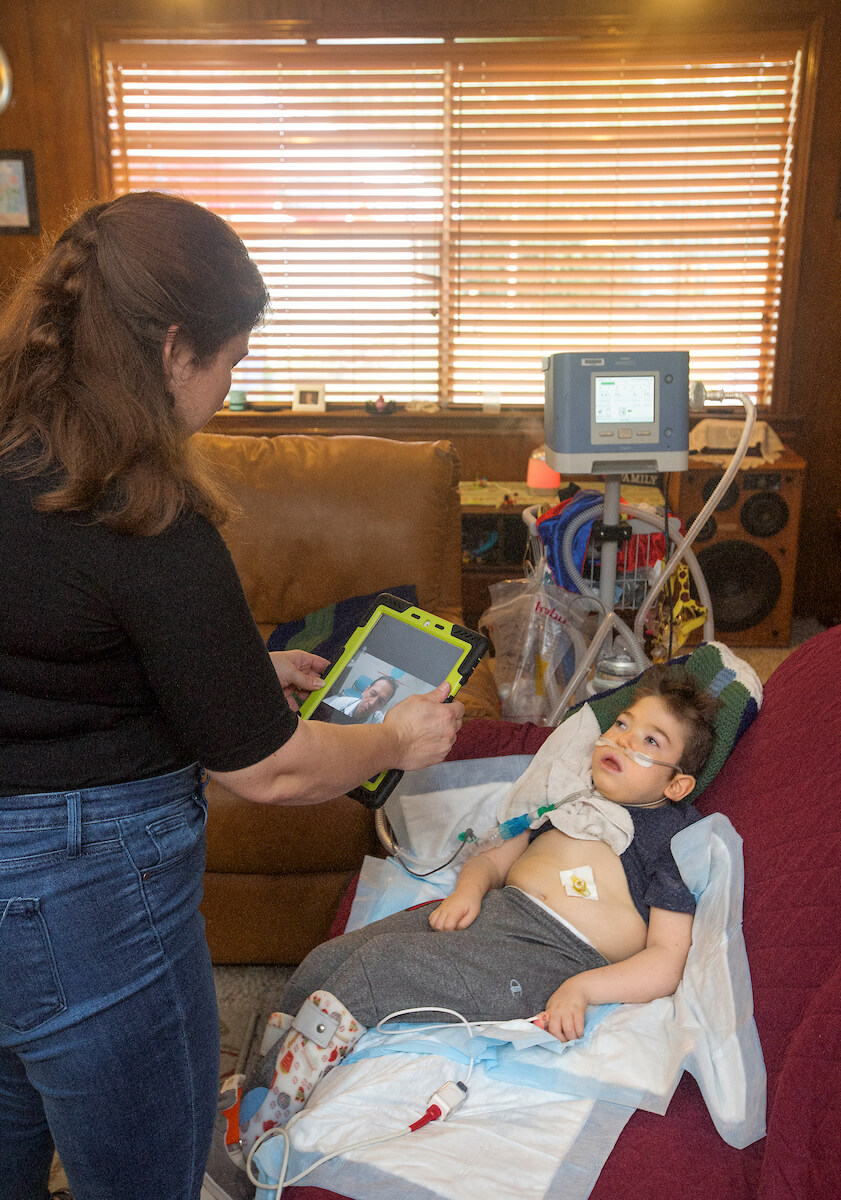 His life was transformed six weeks later after losing consciousness and nearly succumbing to SIDS, or sudden infant death syndrome.

A frantic hour crammed with multiple interventions saved his life.

“I had to do CPR while my mom called 911,” Lingenfelter said. “The paramedics came and did CPR. He was taken to Sugar Land Methodist, where he was revived. It was 20 minutes from when I started CPR. Judging from the brain damage on the MRIs, it was probably over 30 minutes.”

Now 6, Nathan doesn’t walk or talk. He breathes on his own, but requires a ventilator. The loss of oxygen to his brain for half an hour resulted in a severe mental deficiency; developmentally, he functions like an infant three to six months old.

But, Nathan’s denim blue eyes are animated. At about 50 pounds, he is still light enough for his mother and full-time caretaker to carry—but not for much longer.

Not only must Cheryl Lingenfelter change her son’s diapers and manage his feeding tube and treatments, but she must also negotiate a never-ending cycle of medical appointments. Those trips require a load of essentials— Nathan’s wheelchair, extra diapers, medications, breathing gear and a change of clothes. That’s all planned and packed before she loads him into her SUV, drives from their Sugar Land home, unloads, hopes he doesn’t acquire an illness in the office, reloads and returns home.

But relief has come through friendly medical faces on Cheryl’s iPad.

For several months, Nathan has been enrolled in a telemedicine study at the UT Physicians High Risk Children’s Clinic.

Nathan now can be observed and treated at home through a telemedicine app on his mother’s tablet.

“It’s almost like FaceTime, in a way, where we can see each other and I can move it so I can show them what he’s doing,” Cheryl said. “It’s really helpful, especially when it comes to his breathing issues. They can see exactly what I’m talking about.”

“For the physician, it’s nice because it helps you to determine what to do with the patient,” he said. “Sometimes, they call me on the phone and I am not sure if they need to be seen or not. It’s a nice tool because I can see with my eyes and determine the next step for them.”

Mosquera, a pediatrician and pediatric pulmonologist, has led the clinic since its 2010 founding by faculty at UTHealth’s McGovern Medical School. He now has 400 patients.

The medical team is made up of 11 specialists whose collective expertise covers neurology, genetics, infectious disease, gastroenterology, nephrology
and physical medicine and rehabilitation—comprehensive care for fragile youngsters with medical complexities.

“I wanted to avoid fragmentation of care for those patients,” said Mosquera, an associate professor of pediatrics at McGovern Medical School. “We wanted to put everyone together at the same time and in the same place.”

Early on, Mosquera conducted a two-year study examining the medical team approach in the then-outpatient clinic. The results, published in the Journal of the American Medical Association (JAMA) in 2014, said this outpatient team strategy cut costs by $10,000 per child per year and decreased the number of sick children, hospital admissions, intensive care entry and emergency department visits by half.

Now, clinic officials want to determine whether virtual visits can maintain the standard of care where high-risk patients spend most of their time—at home. A Texas Medical Center Health Policy Institute grant provided about $100,000 to support the clinic’s two- year telemedicine study by funding software and data tracking. Many of the clinic’s patients are on mechanical ventilation and require other equipment, Mosquera said, which make in-person visits stressful.

“It’s extremely difficult to do home visits all the time, so I said: Let’s do telemedicine and take advantage of the technology,” he said, adding that he always keeps the overall mission in focus: “We have to determine if telemedicine is safe for this population.”

The research began in September with 365 patients. Half are now using telemedicine and the other half are continuing with their regular clinic appointments.

“We wanted to make sure the technology was good, that we could see the patient well, we did not lose the signal and we wanted to be HIPAA-compliant,” Mosquera said, referring to the Health Insurance Portability and Accountability Act of 1996, which requires the privacy and security of patient information.

“So far, we know we are not harming the patients,” Mosquera said. “If you prescribe medicine over telemedicine without putting your hand on the patient, [the fear is] maybe you are going to miss something or maybe you’re going to create more problems. I don’t think that’s the case. I think it’s going to be good for the patients, but it’s important to do the study to demonstrate that to people and to convince the payers in the future that this
is a safe way to save money and to improve outcomes in the patients.” 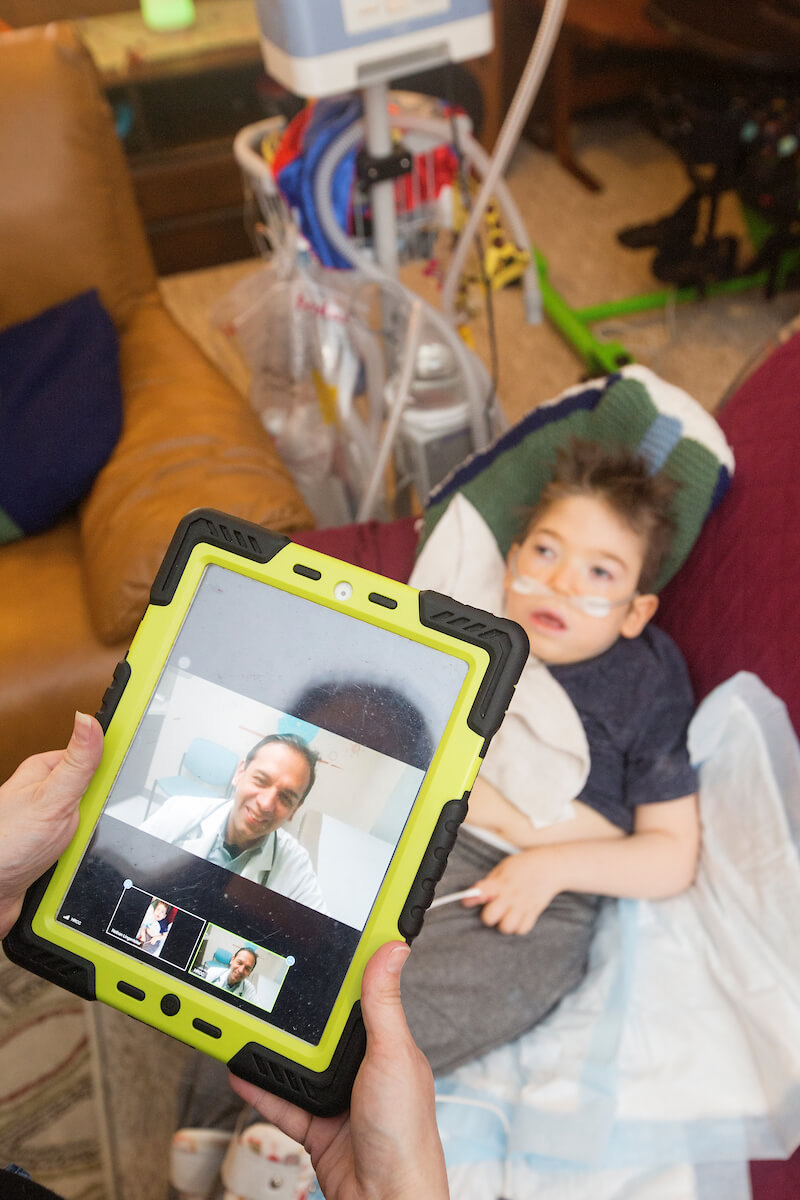 For Cheryl Lingenfelter, telemedicine has been a life-changing and time-saving advantage. Her hus- band, James Lingenfelter, works as a brass instrument repair technician and professional musician while she home-schools their three older children and cares for Nathan.

“I’ve always just believed that whatever God brought into my life, he would give me the ability to do,” Cheryl said. “I couldn’t do this without the High Risk Clinic.”

Nathan has been a clinic patient since 2015 after a six-week stay at Children’s Memorial Hermann Hospital for respiratory failure.

“With telemedicine, we change his respiratory settings every week,” the physician said. “He doesn’t have to wait until the next visit with me. I can help him. I can support him better. The main thing with Nathan is that sometimes he doesn’t take deep breaths because his brain doesn’t send a signal for him to breathe the right way, so we have to help him with additional machines.”

Thomas Kim, M.D., a leading telehealth crusader in Texas who advocated for changes in the state’s telemedicine laws during the last legislative session, said children with special medical needs are among those who can benefit most from this method of health care.

In 2017, Senate Bill 1107 removed rules that required face-to-face consultation between a patient and physician providing a telemedicine service if the physician had never seen the patient. The law also compels insurance plans to cover services delivered via telehealth, so long as the consultation is
not simply audio or written—the appointment must involve more than a phone call or text. Most of the act took effect in 2017, with the remaining sections taking effect on Jan. 1, 2018.

“That is the first step in what I am hoping is a continued journey in making telehealth more accessible and more helpful to the people who need it,” said Kim, who is based in Austin. “Telehealth care is health care. Full stop. It is simply a means to delivering actual health care.”

A study published in Health Affairs in December found that 15.4 percent of physicians worked in practices that used telemedicine for a broad range of patient inter- actions. Radiology, psychiatry, car- diology, pathology and emergency medicine were among the medical specialties with the highest rate
of physician-to-patient telehealth use. The data was derived from the American Medical Association’s 2016 Physician Practice Benchmark Survey and provided the first nationally representative estimates of physicians’ use of telemedicine.

“Any provider could develop what I call the skill of telehealth,” Kim said, “which is to say: How do I leverage technology to help me do my job better and deliver better care for my patients?”

Kim envisions mobile devices— specifically smartphones—as the health care delivery platform of the future. Receiving telehealth insurance reimbursements at the same rate as in-person visits, he added, is “the next hill to climb.”

Mosquera’s next challenge is to determine how to make his clinic more helpful to the parents and other people who take care of his patients.

“I feel really good about this program. We love our patients,” he said. “I’m going to keep going. I want to keep doing more. I want to be the best program in the country for children with medical complexities.”