Rodeo rehab: How one cowboy is coming back after injuries

Rodeo rehab: How one cowboy is coming back after injuries 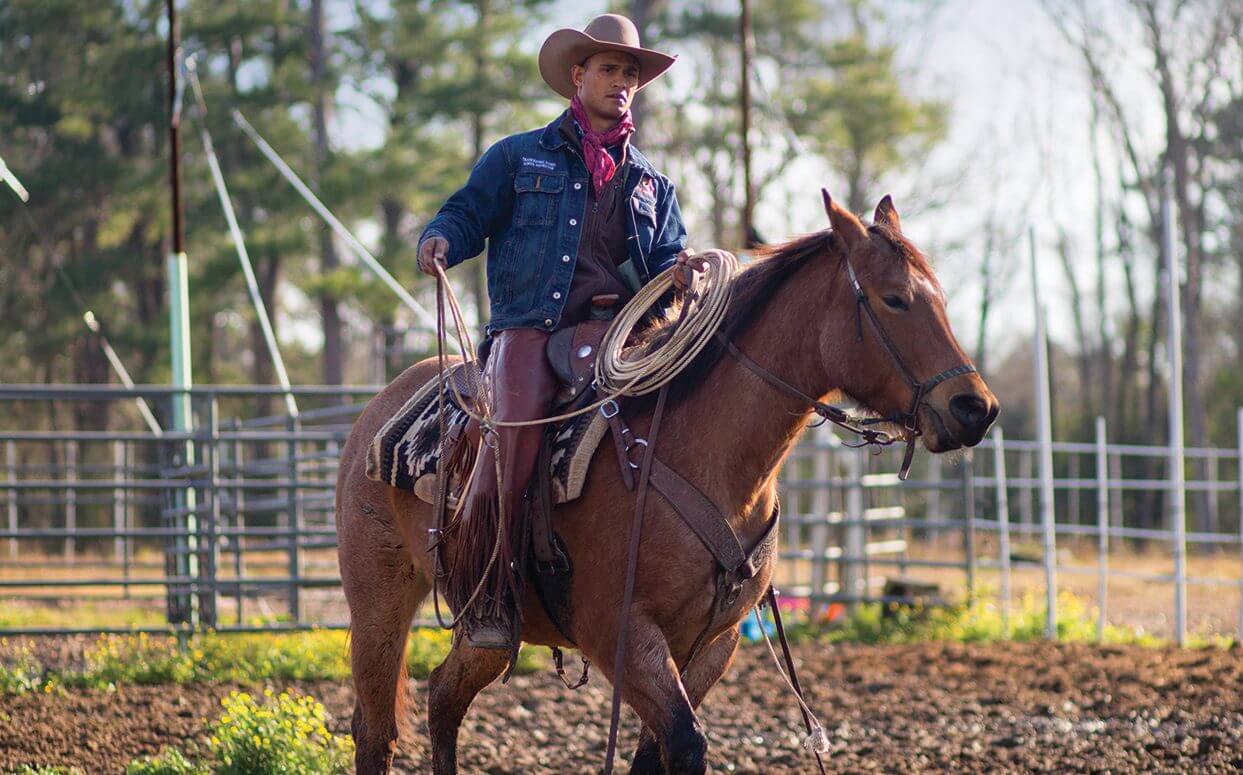 But before he can reach that milestone, there’s one thing he must do. Heal.

Two and a half years ago, Thomas suffered what he believed to be a broken elbow during a competition. He didn’t even fall off the bronc—the rodeo term for a horse that bucks—but the sheer force from the animal was so extreme that something snapped.

He didn’t know what or in how many places—all he knew was that he would have to ride through the pain. And that’s exactly what he did for 18 months.

“That was my first ride for that week, and I had to ride another three, so I think I broke it pretty good by the end of the week, and it really didn’t get any rest for another year and a half before I got it fixed,” Thomas said. “I kept competing with it because I had to keep making a living and trying to make my goals a reality. In rodeo, you don’t get paid unless you win.”

Thomas finally scheduled X-rays and, after competing in the RAM National Circuit Finals Rodeo in April 2018, headed to Fort Worth for what was supposed to be a straightforward surgery.

It turned out, however, that Thomas was suffering from far more than a broken bone.

A pre-surgery MRI revealed a laundry list of problems, including recurrent hyperextension injuries, a minimally displaced anterior medial coronoid fracture, and an ulnar collateral ligament (UCL) tear—something commonly seen in professional pitchers. Thomas had torn his UCL on both the proximal and distal sides, which required an extensive repair. His MRI also showed chronic entrapment of his radial, medial and ulnar nerves, indicating that the three major nerves running down his forearm were surrounded by scar tissue, decreasing their ability to send electrical signals to his hands and, thus, reducing his grip strength. He also suffered from scar tissue and stiffness in his elbow joint, as well as bone spurs, which triggered a sharp pain every time a horse bucked and his elbow straightened.

The surgeons in Fort Worth did their best to repair the damage, cleaning out the areas around the nerves, removing the bone spurs, taking out the pieces of fracture that hadn’t healed and reconstructing his UCL. It was a major surgery—so extensive that it could have ended a riding career. But Thomas was determined to get back in the arena, his sights unwavering and set on the National Finals Rodeo in Las Vegas, where the world champions are crowned.

A friend recommended Thomas get in touch with Brian Duncan, a physical therapist and the director of human performance at Memorial Hermann IRONMAN Sports Medicine Institute in Houston. Thomas was willing to try anything, plus the gym was located less than 30 miles southwest of the ranch in Humble, Texas, where he works with horses.

After a series of conversations and consultations, Thomas began seeing Duncan and his team regularly at the institute’s Human Performance Lab starting in October. By that time, he had lost a substantial degree of strength and the muscles in his arm were so stiff that he couldn’t straighten his elbow.

“Our first goal was to try to get his range of motion back, because after the surgery, his elbow was really bent, so we tried to strengthen and just avoid as much pain as we could,” explained Blaine Schmidt, a performance coach at the institute who has worked closely with Thomas. “After that, it was trying to get all of his strength back, because he was out for months with almost no physical activity.”

“We took what us physical therapists and strength coaches know about the biomechanics of other sports and then Anthony walked us through the biomechanics and requirements of his sport and where people get into trouble—what positions and things like that. And so that allowed us to better design his strength and conditioning and his rehab,” Duncan said. “It’s definitely not something we necessarily study in school.” 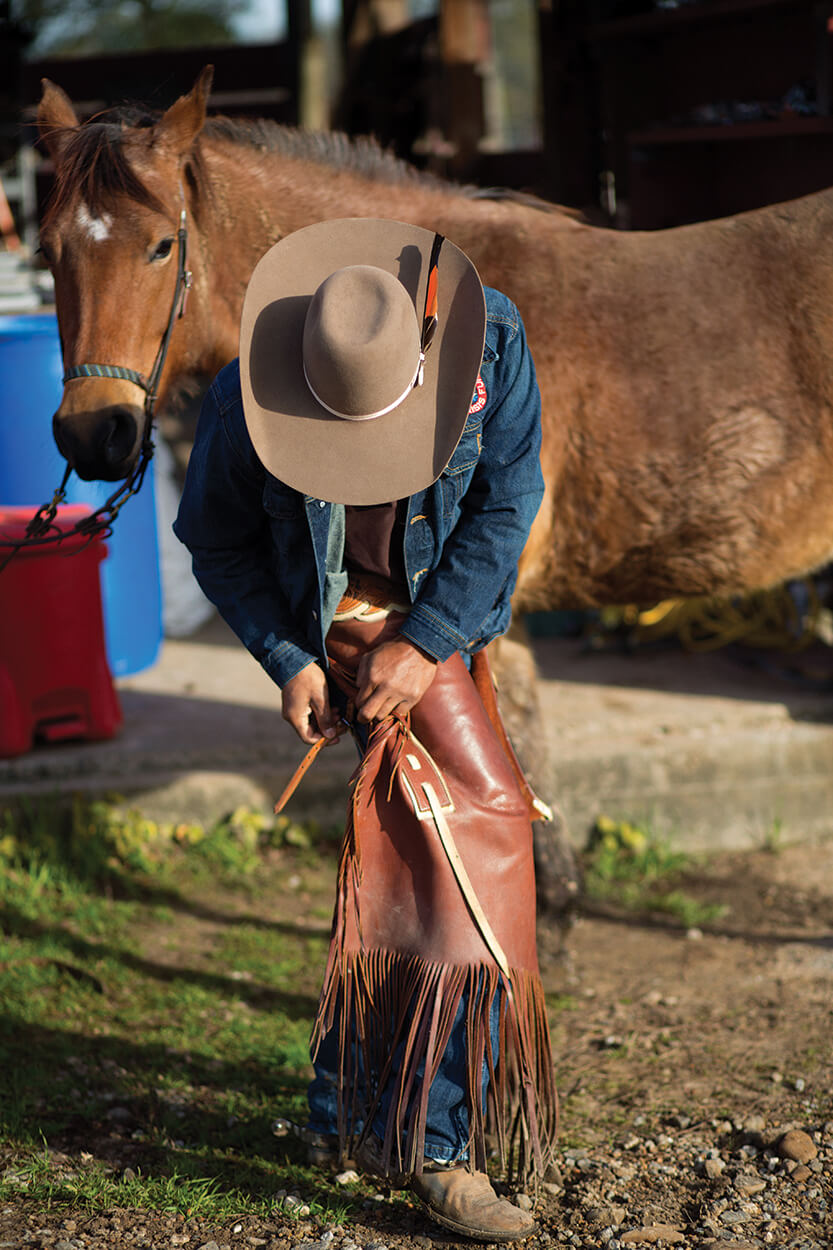 Thomas tightens his chaps before working at a ranch in Humble where he breaks horses. He wears chaps to protect his legs while he’s moving around on the horse.

“It looks like they’re just getting thrown all around but they’re relaxing at the right moments and then snapping back into position,” Duncan said. “Anthony would go frame-by-frame with us and explain what he was doing. He’d say, ‘I’ve got to stay on my saddle. I’ve got to have my elbow tucked in and my shoulder retracted back. I’ve got to have my wrist here and my chin tucked because if my chin goes back, then my whole body will follow my head and arch back and then the horse will buck. And if I’m not tight through my abs, I’m not ready for the next buck and then I’m out of position and I can’t hold on, and then I’m off the horse.’”

“They’ve done a really good job helping me out,” Thomas said. “And they’ve done an even better job of learning my sport and studying it every day and learning how my body works for my event and which parts of my body to train in different ways than they would for other athletes.” 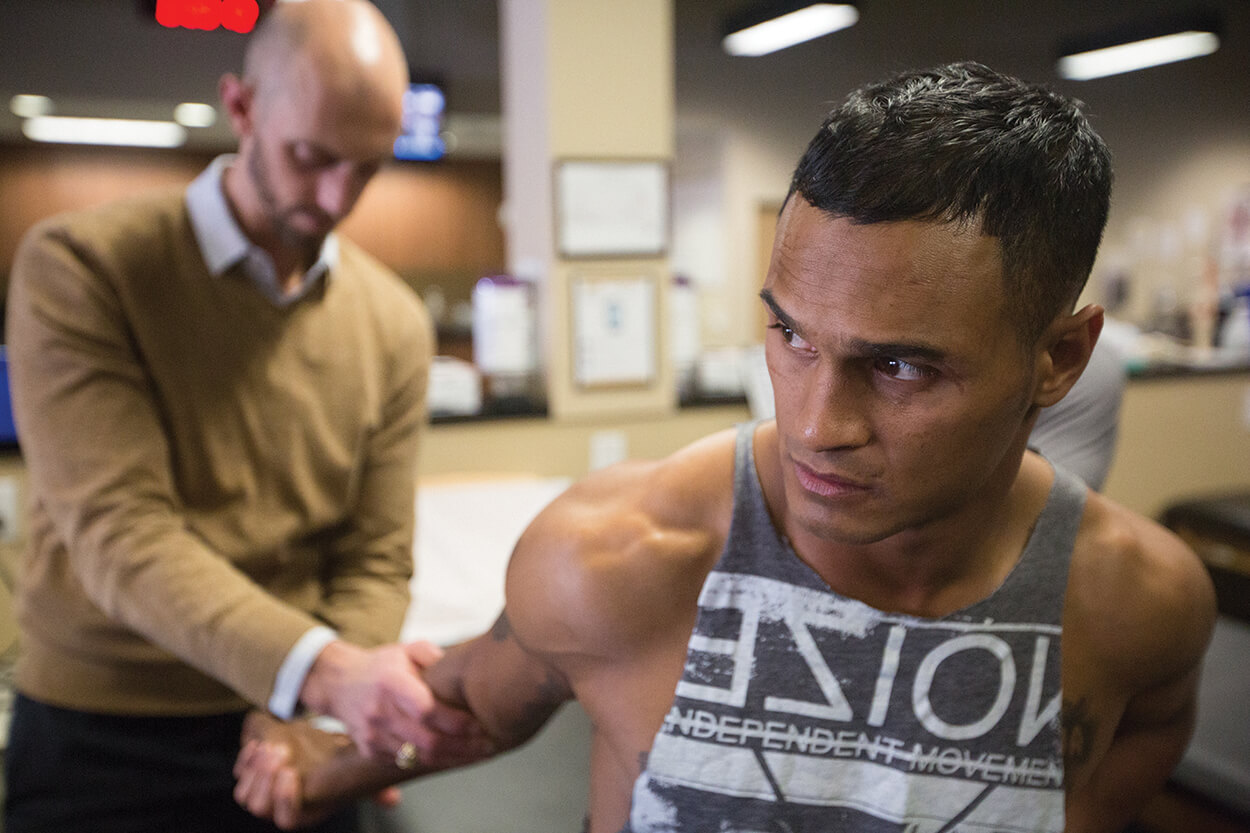 Thomas works with Brian Duncan, a physical therapist and the director of human performance at Memorial Hermann IRONMAN Sports Medicine Institute in Houston.

When he’s not riding, Thomas goes to the Human Performance Lab to work out every weekday for hours at a time. He starts with physical therapy to loosen his muscles, a routine that often includes an ultrasound to warm the muscles and a therapy called Graston Technique, which is essentially a deep tissue massage to treat scar tissue. He then focuses on his elbow joint, some lower level strengthening and muscle activation exercises.

When Thomas is finally warmed up, he starts a full-body workout, which often includes incline dumbbell presses, hip thrusters and reverse fly exercises using a resistance band. Many of the unique exercises his trainers created mimic the position of riding a horse, or even being bucked. During one such routine, Thomas will hold a free weight against a towel pressed against his head, then move back and forth exercising the muscles in his neck and shoulders.

Duncan and Schmidt monitor Thomas’ schedule and progress regularly, even on the weekends when they’re not at work. Schmidt has also created a warm-up schedule for Thomas to complete before each competition to reduce the risk of injury and help with soreness and inflammation.

“I used to get much sorer and more inflamed before I did the competition workout he made for me,” Thomas said. “We might drive 12 or 14 hours or something and ride a bucking horse and use everything we have and use all our adrenaline and the lactic acid is flowing, and then we have to jump back in the car and sit for another 10 or 12 hours, so you get sore and stiff easily.”

It’s an incredible amount of strain on a body, but for Thomas, it’s worth it. 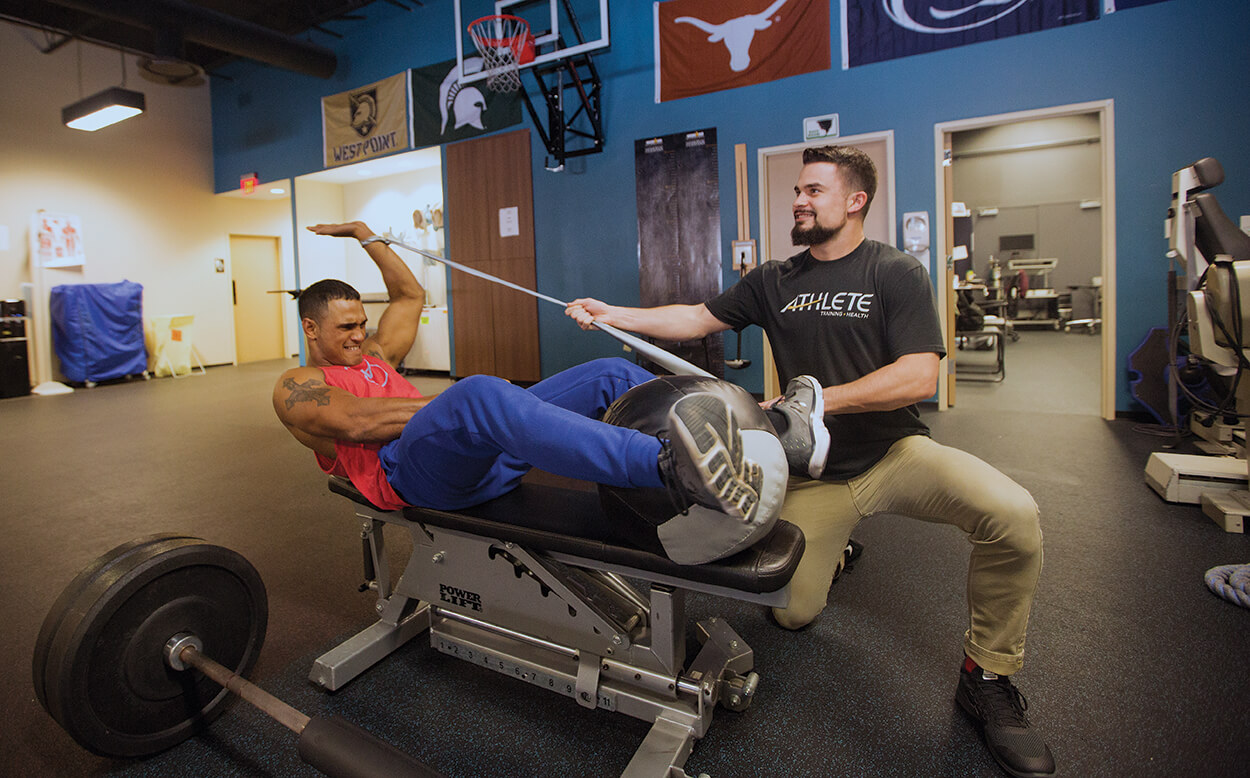 Growing up in Western Australia, Thomas was first introduced to horse riding when he was 12 years old.

“I kind of had a bit of a rough childhood and I decided to move away from home. I went to agricultural boarding school in the middle of nowhere,” he said. “I ended up moving to a cattle station with friends of mine that I went to school with, and we had a lot of wild horses and wild cattle, so I was kind of drawn to the danger of it and I never really got hurt that much and it was something that I just always had a craving for and something I was good at.”

He fell into rodeo after that, competing and winning at local competitions. He decided to move to the eastern states in Australia, where the pro-rodeo circuit was and set small goals for himself. He ended up winning the pro-tour title there in 2011, so he moved to Canada in 2012 and then entered the United States on a sports visa in 2013.

“I’ve been back and forth for the last six years riding full time on the professional circuit,” Thomas said. “I moved to the United States to make the national finals and be a world champion one day.”

Despite his injuries, Thomas is more certain than ever that he’ll get there.

“I’m definitely more fit and agile and fast and stronger than I’ve ever been,” he said. “These guys went to school to study how the human body works in a performance aspect, and once they put that together with an understanding of the rodeo event that I do, they’ve helped me target the muscle groups that I need specifically for what I do. There’s no amount of training you can do to prepare yourself for a bucking horse—you can’t simulate the violence that the bucking horses have toward your body in a gym. You just can’t. But what we do in here is we prepare so that I’ll have full control over my body so it’ll minimize injury.”

Maintaining health and fitness year-round is the key to success. In rodeo, the most consistent guys win, Thomas said.

“It’s just being flawless in your technique and being able to ride every single kind of horse,” he added.

Despite 15 surgeries prior to the last one in Fort Worth, Thomas had never undergone any type of physical therapy before arriving at the IRONMAN Sports Medicine Institute. And that just may hold the key to his championship title.

“I’ve never rehabbed before in my life,” Thomas said one day at the gym.