Replacing a pill with an app

Digital therapeutics could be part of your doctor’s next prescription

Replacing a pill with an app 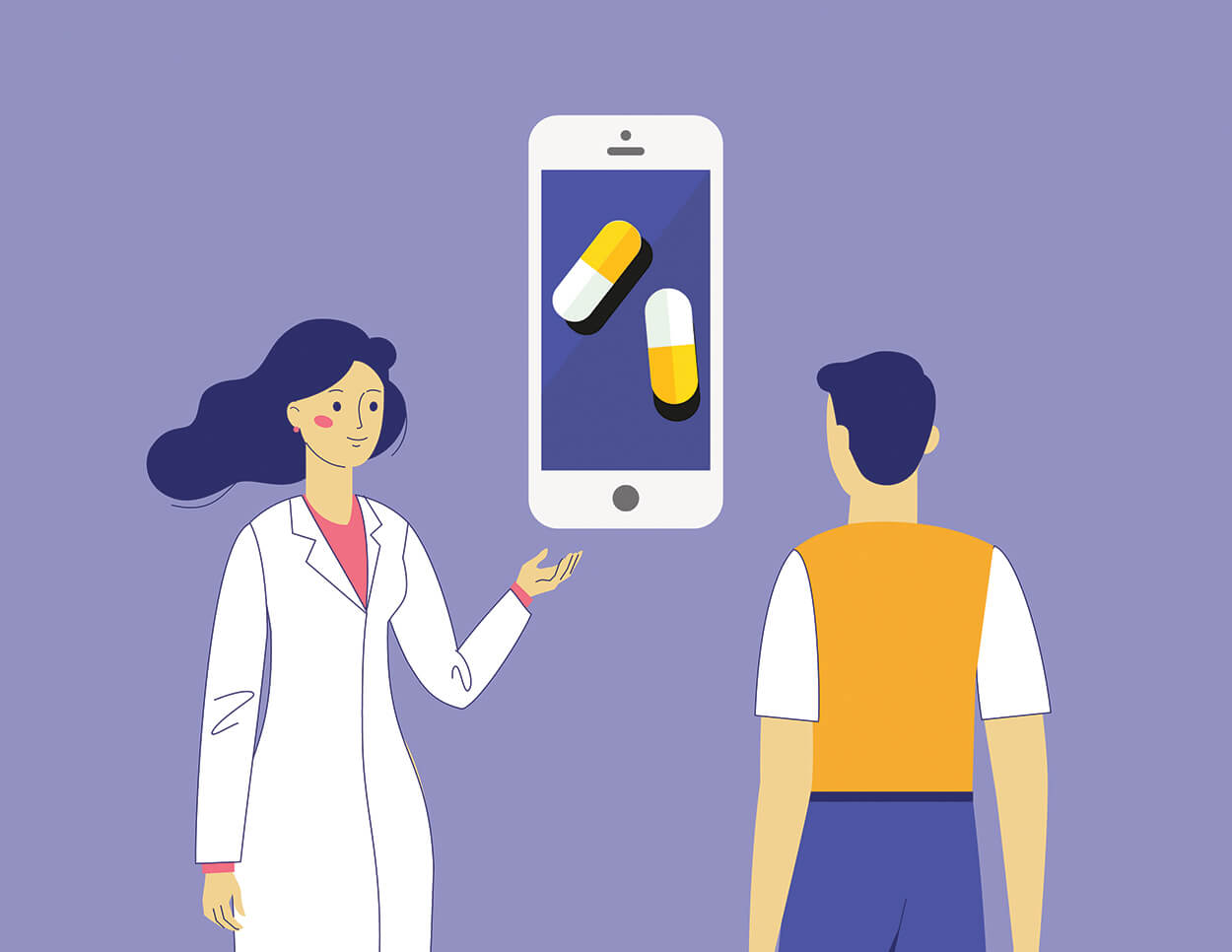 On Aug. 25, 2017, Elizabeth Newlin, M.D., watched from her office window as rain engulfed the city. She was part of The University of Texas Health Science Center at Houston (UTHealth) ride-out team during Hurricane Harvey, the catastrophic storm that unleashed more than 50 inches of rain over six days, displacing more than 30,000 people and prompting more than 17,000 rescues.

“We knew after a disaster of that magnitude there would be an increase in demand for mental health care. At the same time, we knew that resources were already limited,” said Newlin, who serves as the associate executive director at UTHealth’s Trauma and Resilience Center. “Many people lost their cars, for example. Transportation to get to appointments became more of a challenge. … In the immediate hours and days following the storm, I started thinking, ‘Wow, we’re going to need to really think about how to triage and reach people in innovative ways because the needs are going to be overwhelming.’”

In response to the mental trauma left in Harvey’s wake, Newlin spearheaded an effort to create an app for mobile devices that would provide patients with the same psychiatric support they would receive in the clinic.

UTHealth partnered with Magellan Health to create the On to Better Health app, which officially launched in January 2019. The app, which is available to all UTHealth Trauma and Resilience Center patients free of charge, offers six different programs: MoodCalmer for depression, which helps break the cycle of negative thinking; FearFighter for anxiety, panic and phobias, which helps users confront and change their thoughts; ComfortAble for chronic pain; Restore for insomnia and sleep problems; OCFighter for obsessive compulsive disorder; and Shade for alcohol and substance abuse. Each module contains between 4 and 10 sessions that last from 25 to 50 minutes.

“It’s not unusual for me to recommend an app to one of my patients,” Newlin said. “There’s an app for just about everything now.”

The app has undergone 12 clinical trials and covers the selected conditions because of their prevalence among the adult population, said Summer Danner, program coordinator at UTHealth.

“These conditions are present in over 25 percent of all adults and make up 90 percent of behavioral health complaints,” Danner said.

The app uses cognitive behavioral therapy (CBT), which is considered the gold standard of psychotherapy for treating a wide range of mental health issues. Experts tout it as an extremely effective, evidence-based intervention for psychological disorders without a high price tag or potential side effects from psychotropic drugs (including antidepressants, antipsychotics and mood stabilizers), which work by influencing the neurochemicals that regulate emotions and thought patterns.

“CBT is a type of talk therapy that helps people identify and develop skills that help them change their negative thought patterns and behaviors,” Newlin explained. “By changing their negative or distorted thoughts or behaviors they’ve developed over time as a result of living with pain, for example, they can change their awareness and develop better ways to cope with that pain— even if their actual physical level of pain stays the same. In other words, the focus can shift from ‘I have to get rid of this pain. I have to stop this pain’ to ‘How can I live more effectively and experience my life differently despite this pain?’”

A spoonful of software

UTHealth’s On to Better Health app is just one example of a new, emerging trend in medicine called digital therapeutics.

“[Digital therapeutics] is a digital product delivering an intervention to a patient with a goal of preventing, managing or treating a disease or optimizing medication,” said Megan Coder, executive director of the Digital Therapeutics Alliance, a non-profit trade organization.

Delivering personalized medicine with a few taps and swipes on patients’ smartphones is the next medical frontier.

According to McKinsey & Company, a global management consulting firm, there are two types of digital therapeutics: digital companions, used to augment treatments along with a health care provider; and replacement therapies, which—as the name suggests— potentially replace traditional pharmaceutical drugs.

Much like UTHealth’s On to Better Health app, the U.S. Department of Veterans Affairs (VA) developed several digital companion apps for veterans suffering from post-traumatic stress disorder (PTSD), substance abuse, anger management and concussions, to use in conjunction with a health care professional. The VA’s PE Coach app uses prolonged exposure to teach veterans how to confront PTSD-related memories, fears and situations. Using the app, patients can record their PE therapy sessions, track PTSD symptoms and access homework and exercises to decrease anxiety.

But can software code replace pharmaceuticals?

One digital therapeutic that replaces a drug is Akili Interactive’s video game to treat children with autism spectrum disorder (ASD) and attention deficit-hyperactivity disorder (ADHD). While antipsychotic drugs and stimulants are used to treat ASD and ADHD, respectively, Akili’s video game uses software as a primary treatment. The game targets specific cognitive neural systems in the brain to deliver sensory and motor stimuli. As the child plays the game, the program trains the brain to filter out distractions, focus on multitasking and improve memory.

“We’re always looking for drug alternatives—things that will reduce the risk of adverse effects or longterm effects that medications are having on patients that we still don’t necessarily know a lot about, particularly in the mental health space,” said Lance Black, M.D., associate director of the TMC Innovation Institute. “There are mechanisms of action that we don’t quite understand how these drugs are working, quite frankly, when it comes down to the biochemical processes. We just know that they have positive effects on some patient populations. But it’s always concerning when there are questions around what else the drug is doing—not just immediate adverse effects, but long-term. Is it changing the neurochemistry? Is it causing things that we won’t recognize until five, 10, 15 years later?”

Not to be confused with health and wellness apps

Digital therapeutics shouldn’t be confused with apps like FitBit or Calm, the meditation and relaxation tool. Unlike the 320,000-plus health and wellness apps flooding the marketplace, such as sleep trackers and fitness guides, digital therapeutics sets itself apart by conducting pre-market randomized clinical trials to demonstrate a very real and measurable clinical value.

“Health and wellness products are fantastic,” Coder said. “But if digital therapeutics are assumed to be in that health and wellness space only, they may not be given the recognition they need. … This is not just an app. This is a health care delivery tool that is clinically validated.”

Education is one of the biggest issues facing digital therapeutics.

In addition, technology advances faster than regulators can keep up.

“Historically, health care has been slow to implement disruptive technology tools that have transformed other areas of commerce and daily life, such as ride-sharing apps and virtual home assistants,” said Bakul Patel, associate director for digital health at the U.S. Food and Drug Administration’s (FDA) Center for Devices and Radiological Health. “These digital health products are creating an opportunity for medicine and health care to reach patients outside the clinic and deliver therapies that can be personalized to the individuals. One factor that can allow this potential to be realized, among many, is the regulation that accompanies medical products.”

In 2013, a group of global medical device regulators formed the Software as a Medical Device Working Group to develop policies and a common framework for this new and nebulous application of existing technology. Chaired by Patel, the group established key definitions, framework for risk, and more.

Since then, the FDA has taken steps to encourage more development and greater innovation in the digital health arena. In 2017, the agency launched the Digital Health Innovation Action Plan to establish policies, add expertise and implement a software precertification pilot to bring clarity and efficiency to the regulation of digital health products.

Investors poured a staggering $12.5 billion into digital health ventures in 2017 and 2018—representing a 230 percent increase in investments compared to 2013 when Software as a Medical Device was formally introduced, according to PricewaterhouseCoopers Health Research Institute’s annual report.

In many ways, this sets up 2019 as a pivotal year for digital therapeutics. While there are already several apps that have been cleared by the FDA—among them, Pear Therapeutics’ opioid use disorder treatment program reSET-O and WellDoc’s mobile diabetes management platform BlueStar—the massive injection of money into digital health has lit a fire under the FDA.

“Our approach to regulating these novel, swiftly evolving products must foster, not inhibit, innovation,” Patel said. “This requires us to take modern, flexible, risk-based approaches to regulation in this area, which we hope will reduce the time and cost of market entry, while assuring appropriate patient safeguards are in place. ”

Digital therapeutics tout a variety of benefits. These apps eliminate the physical barriers of accessing health care, minimize the risk of side effects from drugs and can track and generate real-world patient results and data—all while driving down health care costs.

Sleepio, Big Health’s CBT app to treat insomnia, costs about $400 a year, whereas Ambien, a prescription sedative often prescribed for sleeping disorders, costs $73 for six tablets, according to MIT Technology Review. And instead of paying $63 for a 30-tablet Xanax prescription, UTHealth’s On to Better Health app offers anxiety treatment for free. Studies conducted by Magellan Health showed that patients who used the On to Better Health app experienced a 63 percent reduction in symptoms and a 49 percent reduction in direct costs.

Yet digital therapeutics start-ups must be prepared to face off against the pharmaceutical industry in a David-versus-Goliath battle.

“When drug companies start to compete against things like digital therapeutics, watch out because it’s a huge industry,” Black said. “They not only have the money, they have the influence, the power, the downstream assets—everything a company that’s new and up-and-coming will have difficulty struggling against.”

Black, who has shepherded dozens of start-ups through the TMCx accelerator, said digital therapeutics companies need to accept a “cold dose of reality.”

“What I think people oftentimes fail to see, especially in the health care industry, is that even though you’re better, it doesn’t mean you’re going to get the lion’s share of the market,” Black said. “If you discover a medication, for instance, that’s better than the current standard of care, it’s really challenging to be able to get that market share to sustain that company. Digital therapeutics faces that same challenge. They could be better than an antidepressant medication, for instance, but they’re going up against large companies that have an established base and have millions of patients.”