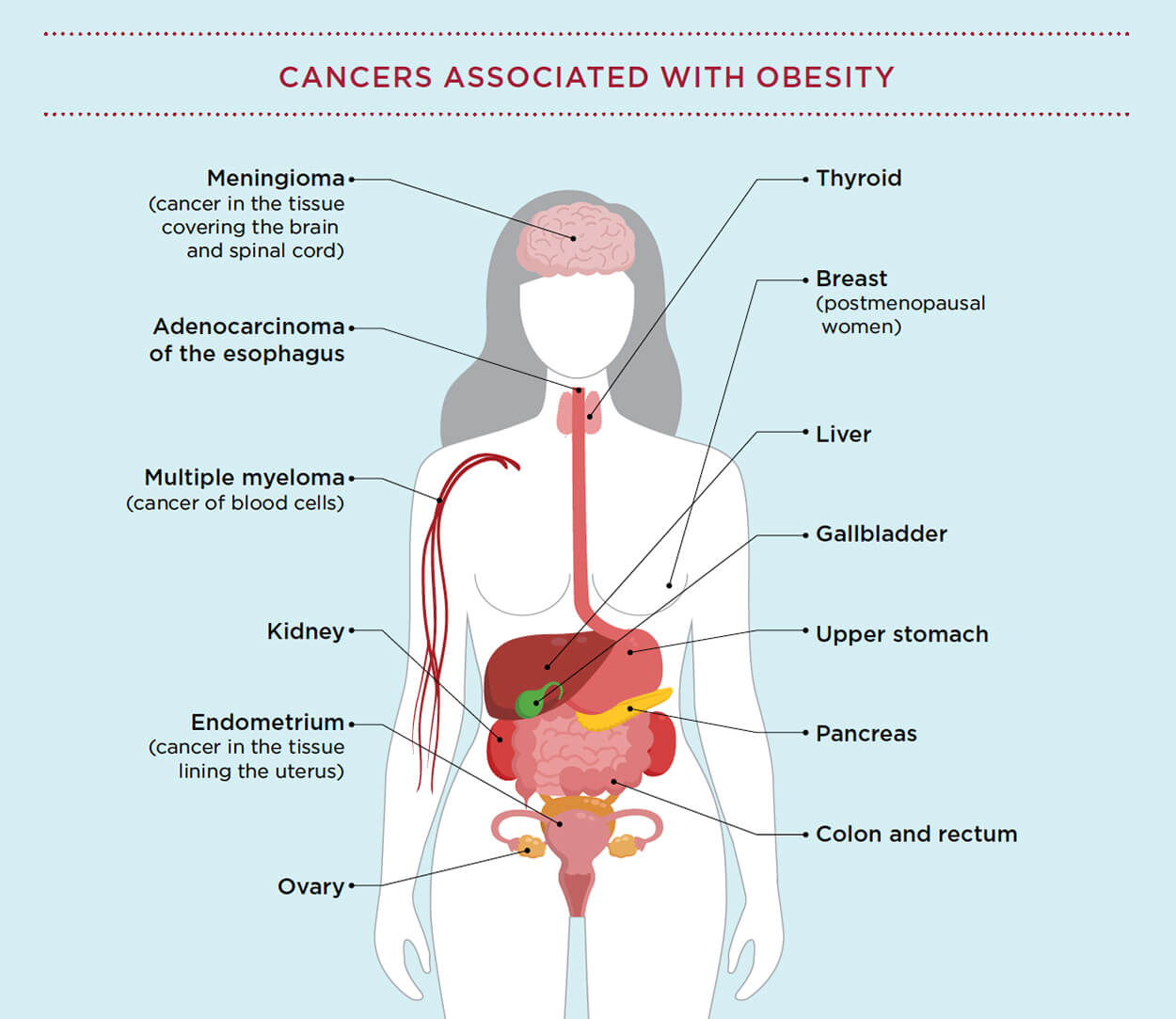 For years, health officials have warned Americans about the link between obesity and heart disease, diabetes and other chronic conditions. But a lesser known fact is that obesity is also linked to cancer.

Adult obesity rates now exceed 35 percent in seven states, according to the State of Obesity report, an annual collaborative project of the Trust for America’s Health and the Robert Wood Johnson Foundation. Texas has the 14th highest adult obesity rate in the country, 33 percent, and the seventh highest obesity rate among 10-to 17-year-olds, 18.5 percent. In a study funded by the American Cancer Society and National Cancer Institute that was published in The Lancet journal in early February, researchers also found that the risk of obesity-related cancers was significantly higher for young adults than the elderly.

“Obesity and obesity-related cancers are a major problem not only in Texas, but around the country, because the obesity epidemic has skyrocketed,” said Kent Osborne, M.D., director of the Dan L Duncan Comprehensive Cancer Center at Baylor College of Medicine. “The two that are most concerning here—they are still a little bit uncommon, but they are the most rapidly rising
cancers in Texas and nationally—are liver cancer and esophageal cancer.”

Texas has become the state with the highest mortality rate for liver cancer in the nation.

“Several pockets around Texas, particularly border counties, have some rates that rival those of China. China has the highest rates of liver cancer in the world,” said Hashem B. El-Serag, M.D., M.P.H., director of the Texas Medical Center Digestive Diseases Center and chair and professor of the Margaret M. and Albert B. Alkek Department of Medicine at Baylor College of Medicine.

“We compared all of the rates from the Houston metropolitan area to the U.S. and we looked at trends and what has changed over time,” said Melissa Bondy, Ph.D., associate director of cancer prevention and population sciences at the Dan L Duncan Comprehensive Cancer Center. “We were interested in obesity because we know that obesity is a problem in our catchment area and it is related to multiple cancers. It is also a significant source of other chronic diseases.”

Because Texas is a multiethnic, multicultural state, the study was able to shine a light on the risk of liver cancer in different populations. Latinos, particularly in south Texas, have become the group with the highest risk of developing liver cancer, according to El-Serag.

“Not only does Texas lead the nation, but south Texas Latinos lead Texas in the risk of liver cancer,” El-Serag said. “The question is why and theories are abounding. We believe it is a combination of multiple risk factors led by obesity and diabetes, both of which increase the risk of fatty liver which alone can cause liver cirrhosis and liver cancer, but also worsens the impact of other factors like hepatitis and alcohol drinking.”

El-Serag’s research has been funded by the Cancer Prevention Research Institute of Texas. He’s also part of the Texas Hepatocellular Carcinoma Consortium, founded in 2015. Together, investigators in Houston, Dallas, San Antonio and the Rio Grande Valley have assembled a large representative cohort of patients with cirrhosis—the condition that predisposes to liver cancer—to examine risk factors and the biomarkers related to the development of liver cancer. The group is looking at these risk factors with a special emphasis and focus on obesity and the related metabolic factors, such as diabetes, high triglycerides and insulin resistance.

“It is estimated that one in four adults in the state of Texas would have fatty liver disease and, among Latinos, it is estimated that one in three adults would have fatty liver disease,” El-Serag said. “It is quite common and we don’t know the risk of progression from this very common disease to liver cancer. We have a disease that impacts virtually a third of adults. What makes some of them progress to complications of cirrhosis and liver cancer?”

Importantly, liver cancer does not present with obvious symptoms until the disease has progressed substantially.

“The liver is a very resilient organ. It has a huge amount of reserve, which means that one can lose 80 to 90 percent of liver function without showing any signs or symptoms,” El-Serag said. “When symptoms arise, it is typically too late—these symptoms include jaundice, edema, generalized fatigue, muscle weakness, spontaneous bleeding. The early manifestations are best detected through biochemical testing.”

Osborne is also deeply concerned about the rise is esophageal cancer.

“Esophageal cancer, cancer of the distal esophagus, is the most rapidly growing cancer in white males because of abdominal obesity,” he said. “The beer belly, if you will, pushes on the stomach and the stomach juices and the gastric acid refluxes back into the esophagus and burns it.”

To properly address these cancers, doctors know tackling the obesity crisis is essential.

“One of the ways to reduce these cancers is to reduce the obesity epidemic and find ways of beating obesity that can range from behavioral science all the way up to surgery that results in weight loss,” Osborne said. “We cover the whole waterfront in the obesity epidemic and, last year, we put all of these people together in a unified program at the cancer center called the Obesity Working Group, where they can collaborate and address the problem from different angles.”