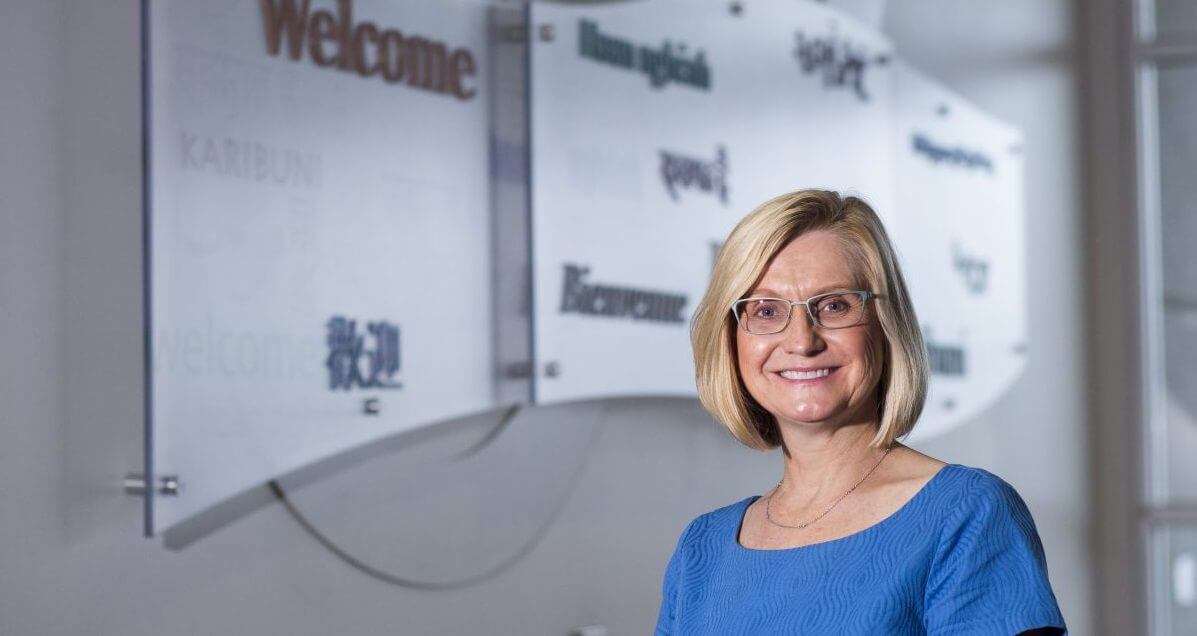 Making childbirth safer for women around the globe is the mission of LISA M. HOLLIER, M.D., president and interim CEO of The American College of Obstetricians and Gynecologists. A professor in the OB-GYN department at Baylor College of Medicine, Hollier (pronounced OH-lee-ay) is chief medical officer for OB-GYN at the Texas Children’s Health Plan and medical director of OB-GYN at The Center for Children and Women. She also chairs the Maternal Mortality and Morbidity Task Force, a multidisciplinary group within the Texas Department of State Health Services. Hollier has spent most of her career working with underserved populations.

Q | How did you end up so focused on maternal mortality? Was there some moment or incident that crystallized your interest and commitment?
A | When I was a resident in Dallas, a woman came into the hospital. She’d had a totally uncomplicated pregnancy. She was young—early 20s. I was about the same age. She came in with the worst headache of her life. She got to the labor room and, unfortunately, she lost consciousness. When she lost consciousness, her baby’s heart rate just plummeted. So they scooped her up, rushed her to the delivery room, did an emergency Caesarean delivery and delivered a baby girl. Her daughter was fine but the mom did not wake up. She went to the intensive care unit after her delivery and that’s where I took over her care. She had suffered a massive intracranial hemorrhage. I worked alongside multidisciplinary teams and really there was nothing we could do. She passed away. And one of the pictures that has stuck with me in my career was actually her husband, when he was leaving the hospital with their baby. It’s supposed to be the happiest day, but he was alone and he was going to raise their daughter alone. He was just so lost. I can still see his face.

Q | Do your colleagues have similar stories?
A | One of the things that struck me when I was in Washington, D.C., meeting with legislators a lot last year, was all of the doctors who were there had been through the loss of a patient that was just devastating. And it’s just … we need to make it better.

Q | What is the biggest public misconception about maternal mortality you and your colleagues have encountered?
A | The biggest problem is that nobody really believed us when we started talking about the problem. We are the most incredible nation with the best medical care ever—how could we possibly have a problem with maternal mortality? In 2011, a group of us who primarily at that time were working with Harris Health System and The American College of Obstetricians and Gynecologists (ACOG) first went to the state legislature and said maternal mortality is a huge problem and it’s getting worse. There was a proposal for a maternal mortality review that never even got out of the public health committee. Nobody was talking about it. By 2013, we were able to start to raise some awareness of the issue, but there still wasn’t this national outcry. By 2016, the publication of some articles in major OB-GYN journals really brought a lot of attention to a number of areas and one of those was the state of Texas.

Q | The Alliance for Innovation on Maternal Health, or AIM, has played a major role in promoting safe and consistent maternity care. What can you tell us about it?
A | AIM is a national initiative, with 24 states participating, that works with hospital systems or states on bundles. Bundles are best practices based on four Rs: readiness, recognition, response and reporting. AIM got funding from the Health Resources and Services Administration to implement these best practices.

Q | How would the “four Rs” address the problem of postpartum hemorrhaging in the delivery room?
A | The ‘hemorrhage cart’ is under the ‘ready’ bundle. If you prepare, then your facility is ready. Another example would be team-based training in your facility—not just the doctors, but the nurses and anesthesiologists and, in some places, your front desk staff who are manning the phones. All those people have to be aware because you might have to contact the blood bank, for example. Recognition is the next part of the bundle. How do you recognize that bleeding is happening? Blood doesn’t always come out of the vagina; a mother could be bleeding in her belly. The next piece is protocols for how you respond: when everybody has practiced together they can respond quickly and in the same way every time with applicable meds that are ready on the cart. And then you just have to keep track. How did you do? Did the patient rally? Were there complications? The bundles are a set of best practices that can be modified by each facility. But in every case, it’s: be ready, recognize a problem when it happens, respond quickly and appropriately and keep track of how you do. 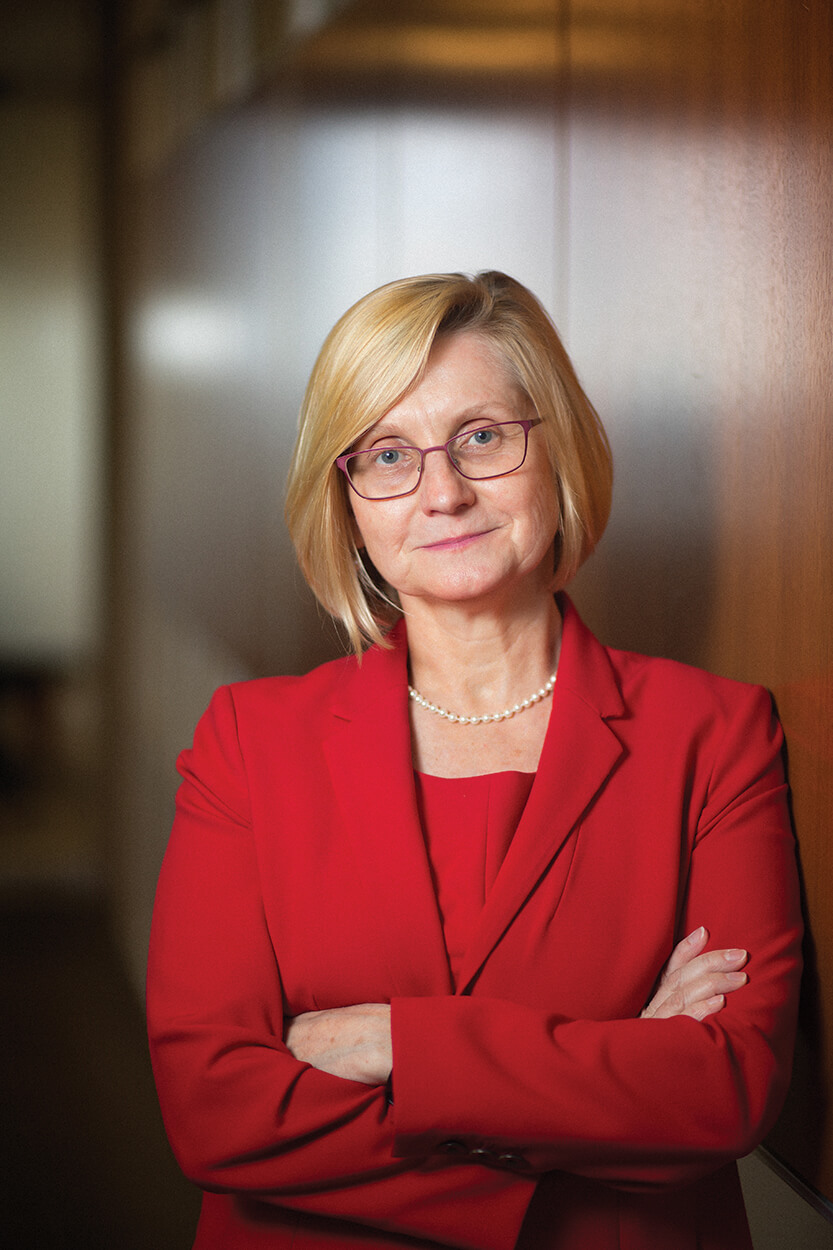 The mission of Lisa M. Hollier, M.D. is to make childbirth safer for women.

Q | Although you will step down as president of ACOG in May, you will continue to act as interim CEO of the nonprofit, a post you accepted when the previous CEO retired last October. Does this mean you spend a lot of time in Washington, D.C.?
A | I moved to D.C.

Q | How has your life changed over the past year?
A | It has been an amazing opportunity to have a chance to act on issues related to improving women’s health on an international scale. We are developing programs and adopting policies that affect women across the globe. We completed a program in partnership with Baylor College of Medicine to reduce death from hemorrhage in Malawi. You know, I started on a local level, then on a state level and then, as president of ACOG, on a national level, and now as interim CEO, I’m working on this international scale to influence improvements in women’s health.

Q | How often do you get back to Houston?
A | It’s really variable. I try to be here a couple of times a month, and I still work remotely. My husband [Larry H. Hollier Jr., M.D., surgeon-in-chief and S. Baron Hardy Chair in Plastic Surgery at Texas Children’s Hospital] teases me because I’m always working. He’s still here.

Q | Do you have children?
A | One son. He’s 19. He’s a freshman at Duke this year and he wants to be a pediatric plastic surgeon, just like his dad.

Q | When you became president of ACOG, you announced three initiatives you planned to roll out, one of which had to do with pregnancy and heart disease.
A | When I was president-elect I started a multidisciplinary task force on pregnancy and heart disease, because we know that cardiac causes account for one in four maternal deaths. The idea with that was to update the clinical guidance that ACOG provides to clinicians. We pulled together cardiologists, high risk pregnancy specialists, general OB-GYNs, nurse practitioners, midwives, ER physicians—everyone who was going to touch these women was brought into the same room and we came up with guidelines. And that new guidance will be released, we believe, in May. My own practice identified two women with cardiac disease because of implementing these new guidelines.

Q | What are the pregnancy-related contributions to lifelong cardiovascular problems? Does being pregnant take a toll on your heart?
A | There are certain pregnancy complications that are very strongly associated with long-term cardiovascular risk. I use that word very purpose-fully. It’s thought that perhaps for these particular women, pregnancy doesn’t necessarily cause the problem, but it unmasks it. Pregnancy is like a stress test that lets you know that particular groups of women are at higher risk. It’s a win-dow to future health. These are the women who have high blood pressure during pregnancy, preeclampsia—these women basically have a doubling of their risk of heart disease over the long term. Women who have gestational diabetes also have a higher risk for heart disease.

Then there’s another group of women who’ve maybe had high blood pressure for 10 years. Maybe they’ve developed diabetes. Those women have cardiac disease that can get significantly worse during a pregnancy. What we’re really seeing in the postpartum period is about 10 percent of maternal deaths are caused by cardiac dysfunction—cardiomyopathy. There’s something pathologic with the muscle of the heart. We don’t completely understand why that’s happening but we are seeing that more frequently.

The good news is there are a lot of people now specifically studying that. We have experts on that in the task force. When we talk about older women, high blood pressure, obesity, those things are associated with maternal deaths more broadly.

Q | In 2016, two independent reports suggested that maternal mortality rates in Texas had doubled over 10 years. A 2018 study, however, corrected those numbers and showed the rate was less than half of what was previously reported, in part because dozens of women were identified incorrectly on their death certificates as being pregnant at the time of death. How can we be sure this won’t happen again?
A | The Preventing Maternal Deaths Act of 2018, which became law in December, recognizes the need for state-based maternal mortality reviews that go beyond the vital statistics we get from death certificates. We saw how limited that was in Texas; the numbers were bad. When you can do state-based reviews like we have been doing, you get to move beyond the cause of death on a death certificate and really look in depth at what happened that day. That is the question the task force asks: Was this death preventable? And when we looked at our Texas data, we ended up grading about nearly 80 percent of our maternal deaths as preventable. That percentage varies from state to state. Most are 60 to 70 percent of deaths being preventable through reasonable actions.

Q | Is this new law a kind of umbrella for all these state initiatives?
A | Yes. It says everybody needs to do these detailed reports, and then it provided funding for a number of these states. We were able to start it here in Texas, but there were other states that had not been able to. Now they have resources that will help them build the infrastructure they need.

Lisa M. Hollier, M.D., was interviewed by Pulse editor Maggie Galehouse. The conversation was edited for clarity and length.